Deep breath… Ready… Set… GO! Your 8-way formation steps off the plane and presents to the relative wind…

The initial period of the jump when the team has horizontal momentum from the forward speed of the aircraft, is transitioning from subterminal to terminal velocity and has yet to reach a parallel to earth orientation is commonly referred to as, ‘the hill’.

Positioning on the hill as the team transitions through the first few points is very critical and is where the pace of the jump is set.  There are a few key factors to understand and plan for with your team prior to every jump.

The initial exit frame, or exit formation, should be presented to the wind relative to the forward throw of the aircraft at a downward angle of approximately 45 degrees from Point to Tail (front to back).  The flyers’ bellies should be exposed to the relative wind and the formation should not have any roll or rotation around the front to back axis.

On GK8 [Golden Knights 8-way team], we keep the grip line of our exit frame to within a few degrees of the aircraft’s line of flight.  Using the Twin Otter as our exit platform, our standard exit has five Floaters on the outside and three Divers on the inside of the aircraft.  This results in our exit frame having more flyers on the left side from a Tail to Point perspective.

Transitioning from our exit frame to the first point, we generally keep our formations in line with the line of flight.  However, to maximize efficiency, we sometimes change the heading of the first formation as much as 45 degrees off the line of flight.  An example of this is Block 20 – Cat Diamond – Cat Accordion [shown in photos].  Because we have more flyers on the left side of our formation, we’ve found it beneficial to build the formation 45 degrees off the line of flight counter clockwise from the Tail’s perspective. When executed correctly, the benefits are twofold.  It allows for an evenly distributed shift for all flyers and sets the stage for a faster transition to the second point of the block, enabling the back piece to drive diagonally up the hill.  If this formation were to build in line with the line of flight, the inside and back pieces would have to make a large shift down the hill. This would cause the back piece to create additional momentum downward which would compound an already difficult move back up the hill. All of this would be happening with the clock ticking and the air thickening but is avoidable with proper line of flight orientation.

Flying on a horizontal plane using your teammates as reference is not be confused with flying in a horizontal or parallel orientation with the earth’s surface.  Because of the unnatural spacial orientation of flying on the hill, it is common to subconsciously want to orient yourself to a belly to earth attitude.  Attempting to achieve that attitude prematurely is counterproductive.  If one flyer or piece (the front piece, for example) begins to flatten or level out while the rest of the formation is on a different horizontal plane, it can cause the top side of the piece to be exposed to the relative wind causing it to lose altitude at a faster rate than the rest of the formation.

When performing a block requiring a vertical transition on the hill (Block 19 – Compressed Diamonds, for example), it is necessary to have each four-way piece fly on two separate and parallel horizontal planes during the interim transition.  In addition, it is important to keep all four flyers for each piece on the same horizontal plane for their respective pieces.  When correcting the vertical space between the two subgroups for the completion of the block, the flyers in each piece must do so as a unit to avoid changing the pitch of that piece.

It’s often difficult for eight people to achieve a common vision, especially for concepts like these.  To get on the same sheet of music, our team stands next to the aircraft mock-up with each person using a hand to represent themselves on the hill.  Doing this as part of your team’s dirt-dive will help minimize confusion and increase your chances of success during one of the most difficult and critical stages of the jump.

This is the third in a series of five articles about 8-way, by multiple World Champion Matt Davidson. 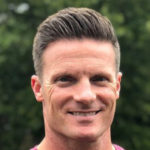 Matt Davidson served for 24 years on the Golden Knights 8-way team and played an important part in their finest achievements, three world records in 1997 and 2015. At 45, he retired from the Army after 27 years and did a season on Arizona Airspeed 4way team.

Please check out my podcasts interviewing Champions of our sport to see what drives them to the pinnacle of achievement. hampions aren’t only those who’ve stood on a podium for the purposes of this podcast. Champions are those who’ve pushed on, defiant in the face of challenge and adversity and have overcome life’s great obstacles. I hope listeners of, “A Champion’s Journey,” will be inspired to tackle whatever it is they want to achieve in life.