This is the first record to be completed under the new record requirements, which encourage more complex formations than the original rules.

As vertical bigway skydives go, the general structure starts with a solid base setting a speedy fall rate to keep the formation fast and stable. Pods surround the base, followed by connecting bridges to lock the pods in place. The formation continues to build from a series of pods and bridges until the desired size is reached.

Enter the sequential skydive. Sequential formations must be formed by releasing grips from the first formation, and forming new grips to complete the subsequent formations. Prior to 2019, World, National, and State sequential records could be completed by a person or sub-group releasing and taking adjacent grips, thereby very minimally changing the formation.

While still difficult in practice, there was something left to be desired to complete a new world record for instance. This was demonstrated in the summer of 2018 with the 3 and 4 point 42-way FAI Vertical Sequential World Records organized by Matt Fry and Melissa Lowe. In 2019, new requirements for sequential World records were proposed to the FAI Skydiving Commission (ISC), which were approved and also adopted by the USPA for National and State records.

The biggest change in the rules is the manner in which a formation change is measured. The previous rules measured how many people let go and re-gripped. If vertical flyers followed the spirit of the rules, we were limited. If we followed the letter of the rules, it was ripe for exploitation. The new rules simply measure how many people build new grips, thus forcing more people to be involved in invoking change.”

I think it’s very important to continue developing each discipline. As seen with the belly record, they’ve plateaued at 400-way, so it was the sequential records that have made continuing and progressing the sport possible. We’re seeing the same thing in vertical formation skydiving, especially since the discipline isn’t growing as fast as previously due to angle flying and wingsuiting.”

With a new challenge and vision in mind, vertical sequential camps in the following years were experimental in nature, testing the limits of what is achievable in terms of formation complexity and size, while seeking ways to increase the amount of working time in the skydive to build more points. In 2021, organizers Matt Fry and Andy Malchiodi put their heads together to create the first world record under the new rules, which is now the 2 point 77-way VSWR.

Given so many variables and unknowns in the world, we wanted to strip down the logistics.  Invite the people we thought could do it, no bench, and just trim people when and if it was needed.  Picking the formations was challenging, as we wanted to do something other than the ‘same old thing,’ but the same old thing is tried and true, so there was a balance.  Concerning the second point specifically, we needed to find the balance between involving as many people as practical, while considering symmetry, balance, and avoiding common pitfalls.”

From a personal perspective, the VSWR experience was extremely structured and well organized. The first day focused on nailing the first point, allowing the formation to properly build in sequence; that is pods, then bridges, and finally wackers. All while doing it fast and clean enough to allow for second and third points. The second day we sorted out the kinks, demonstrated the proof of concept by completing the second point, and just barely missed the record by one grip and one second.

We chose the structure we did because I’ve seen it work many times over both in my events and others, and the proof is in the pudding. It really chills people out. Invokes trust, people see and trust that a system is in play, and not just swinging for the fences every jump, hoping for the best without a process.”

By the morning of the third day we were all amped and ready, and on the first jump completed the 2 point 77-way Vertical Sequential World Record!

For Melissa Lowe, “There’s nothing like being on a world record jump, where there’s a sense of calm and everything seems to be going smoothly. You look across the formation and you see smiles… all goes quiet and then, there’s the magic. The feeling you only get when you know you’ve done something no one else in the world has accomplished – an energy flows – then the magic.”

With time to spare, the group went up two more times trying for a third point, which was ready for the taking. With only 2 attempts, the group demonstrated proof of concept and set up a challenge for another day.

This record was the smoothest record event I have been on. It was special that 77 set out for the record and those same 77 were the ones who got it. When we moved on to the third point, it was right there, it was so attainable. We only got two attempts at it but what I think it has shown us is the future of big way flying. We got a taste for what we are capable of and we are nowhere near our limits. Traditional big-way flying has gotten logistically challenging with how large the formations are getting. What I’m excited to see is a future for multi-point 100-ways. There is a lot of room to grow.” 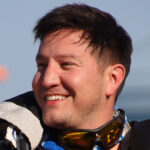 Joey Mire, D-31442 began jumping in Texas in 2004 at Skydive San Marcos, now Skydive Spaceland San Marcos, his home DZ. He holds 7 world records in vertical bigways and sequentials, and enjoys teaching the next generation of jumpers about the safety and fundamentals of the formation skydiving.