In 2010, Australian skydivers set THREE consecutive Australian Formation Skydiving records at Skydive Perris, after 2 weeks of intensive training and preparation under the P3 Skydiving organizing team. These back-to-back-to-back records were a 105-way, a 109-way and, the current Australian record 112-way. Five years later the Aussies are back at Skydive Perris ready and willing to beat their own record…

The Goal is to set a new official APF National Formation Skydiving Record for the Largest Freefall Formation, adhering to all APF regulations for record qualification. The Australian Parachute Federation (APF) requires that 75% of participants on the record must be either an Australian natural citizen, or a permanent resident of Australia. There are no specifications for the remaining 25%, so the hundred plus Aussie skydivers on the dropzone are joined by about 20 ‘FAO’ – Friends of Australia – qualified big-way jumpers like me enjoying the chance to participate in this great event and soak up its unique vibe. 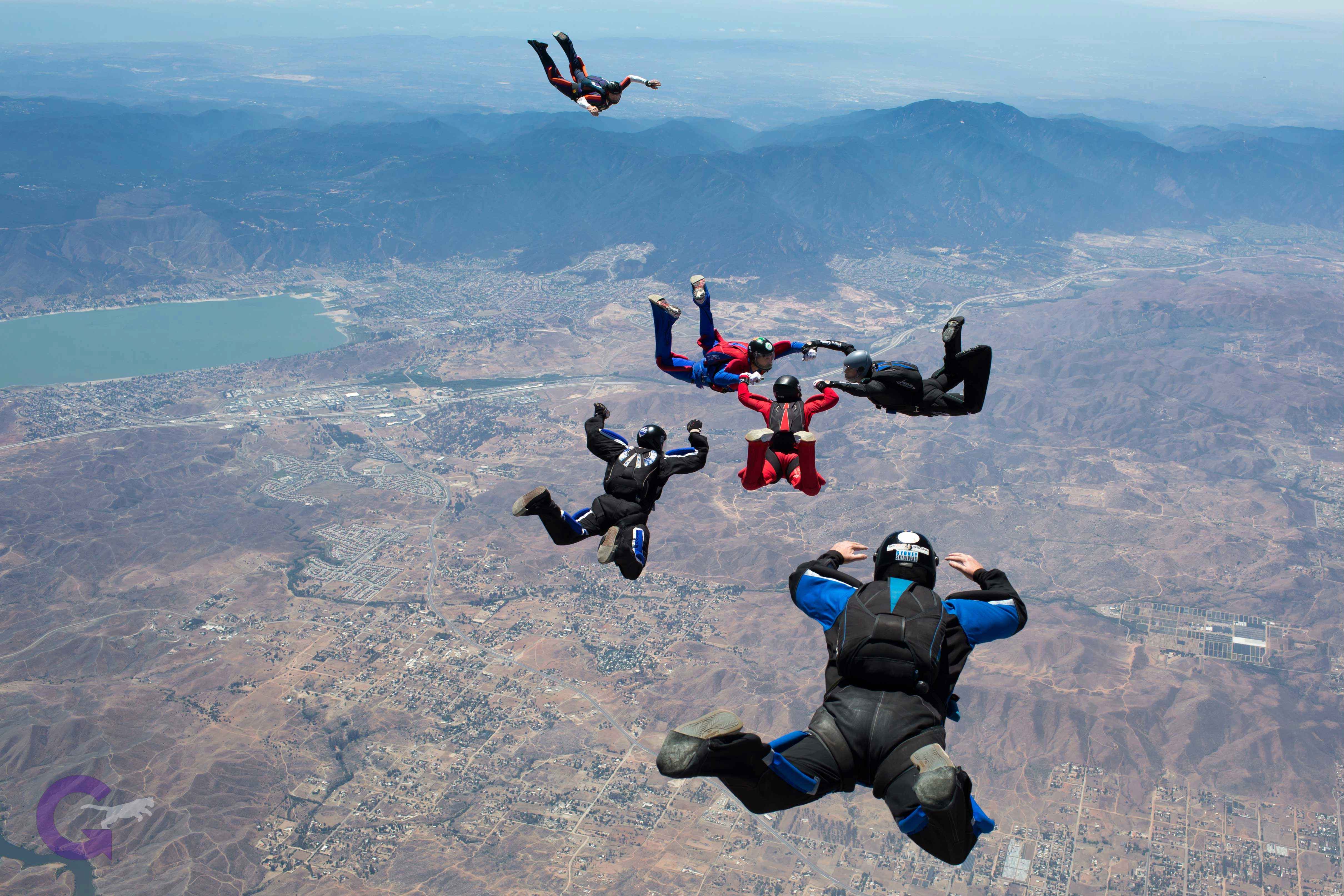 A well planned schedule included a 3-day big-way camp May 20-22, a day off, then a 3-day big-way camp May 24-26, followed by a day off, then record prep and attempts May 28-31 – a total of 44 jumps over ten days. That plan flushed straight out the Skyvan door when clouds and rain kept everyone on the ground for far too long during the big-way camps. This was especially unfortunate as there are a clutch of low-time jumpers with not much big-way experience who sorely needed the coaching and mentoring the camps would have provided. 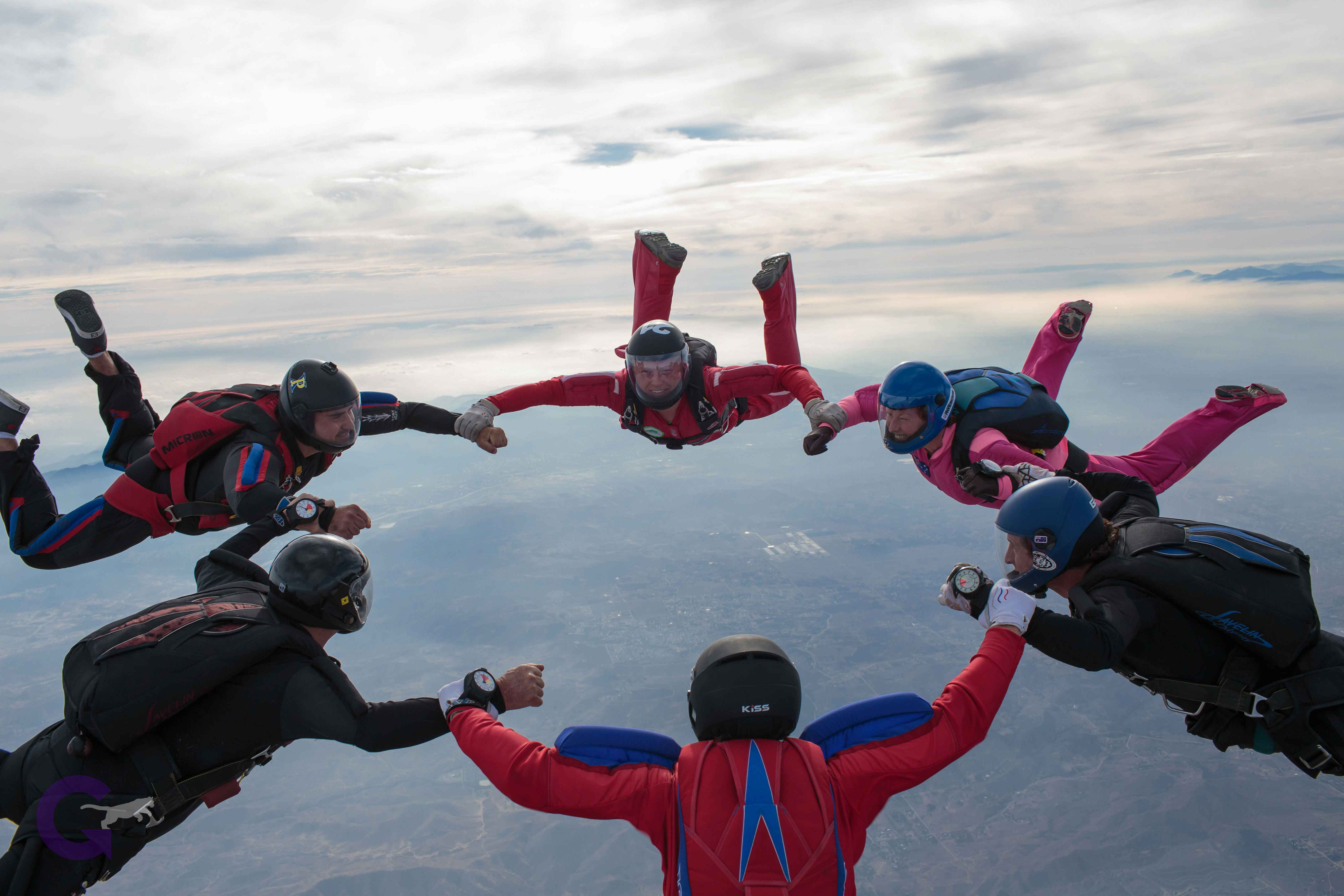 That said you can’t get the Aussies down, they gladly canceled their day off to skydive and maintained in top spirits regardless. Arriving at Perris dropzone on Thursday 28 May, the first day of record attempts, it’s covered with Aussie flags and fluffy koala bears, and a fantastic spirit.

The P3 Skydiving team had planned a 129-way using most of the Australian talent plus FOAs. They had made the hard decision not to take ten Australians on the load, due to lack of prep jumps. These guys were still making organized skydives but just not with the big group. 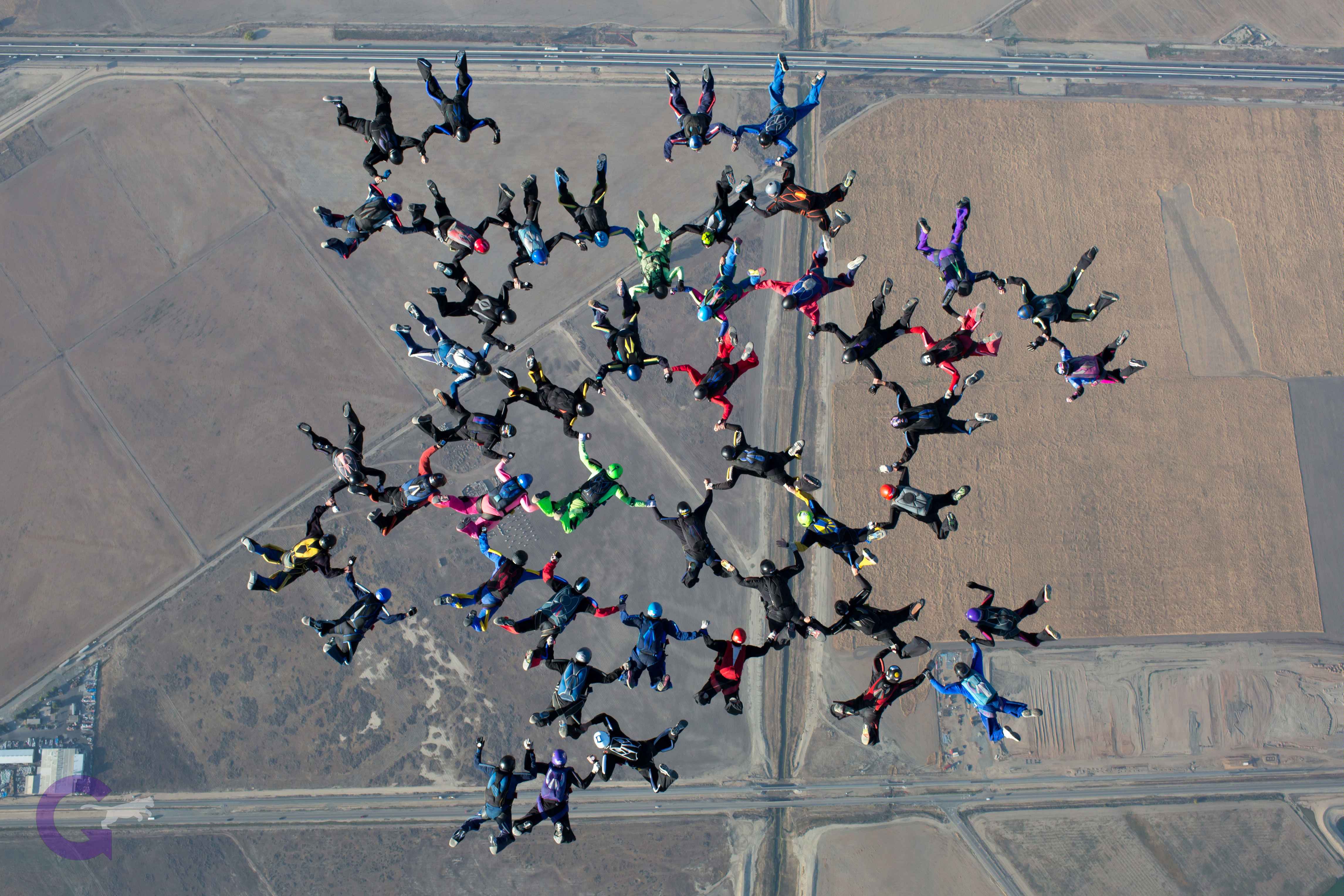 The big formation was broken down into three loads; the base 44-way with Dan BC, and two whacker groups making propellor shaped skydives that when joined would make the six whacker sections of the intended formations. The base 44-way made 5 skydives, of which 3 were nearly complete, and the final two were complete and flying beautifully. 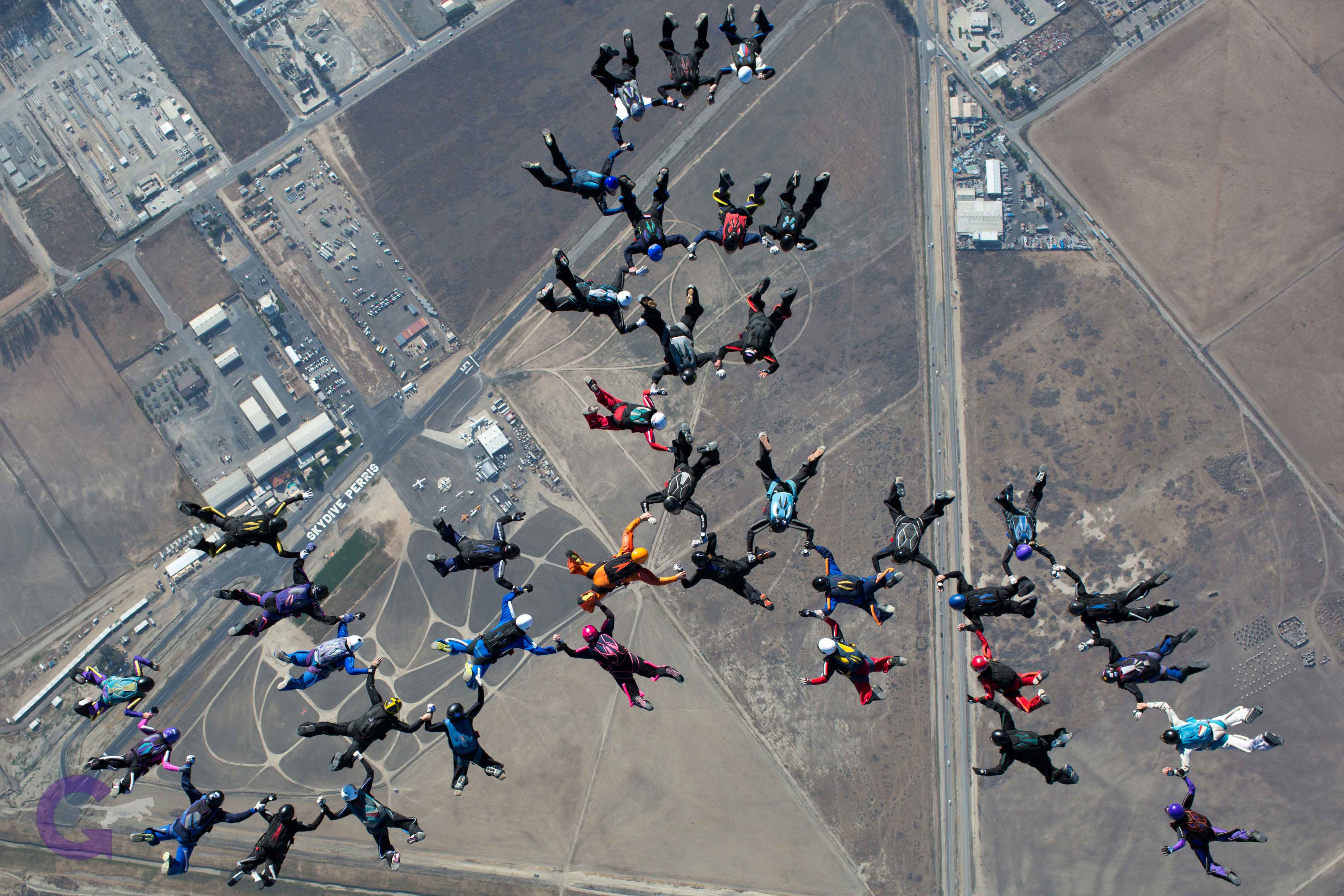 Doug’s whacker group made 5 coached skydives and completed by the end of the day. Larry’s whacker group only made 4 jumps; every whacker completed, just not all on the same jump. Tomorrow (Friday 29 May) will see record attempts beginning, from seven aircraft instead of the planned six, to make the task easier by placing fewer people in each aircraft. We are cocked, locked and ready to rock! 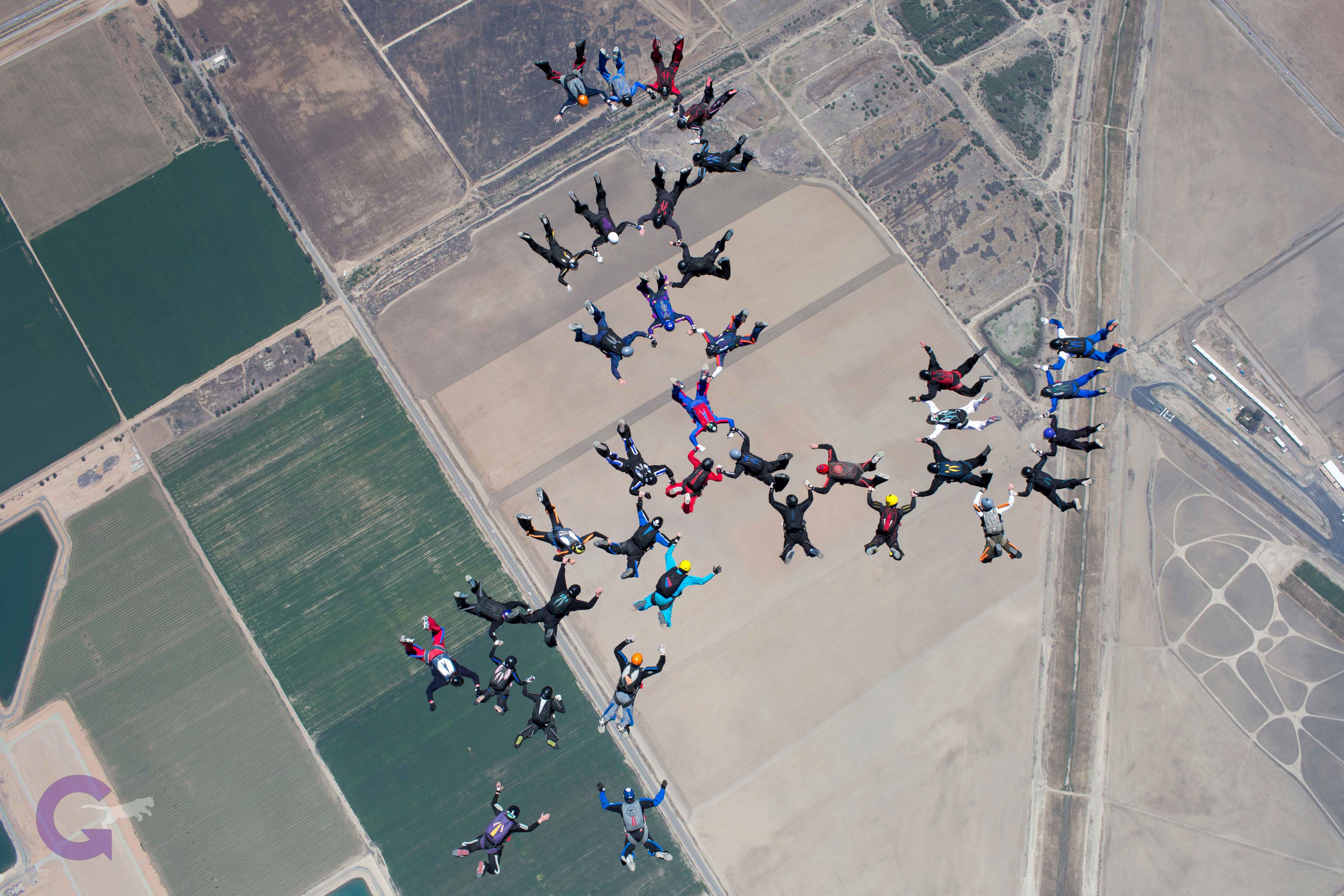 Check out the event page on SkydivingPhotography.com with videos and photographs here, this is publicly available for everyone in the world to watch and support the Aussies pursuing their goal. The videos will be uploaded just after each skydive, an impressive facility that means participants can watch their jumps before the debrief and review overnight as homework, while the many supporters at home and around the world can get the latest news and vibe from the event.