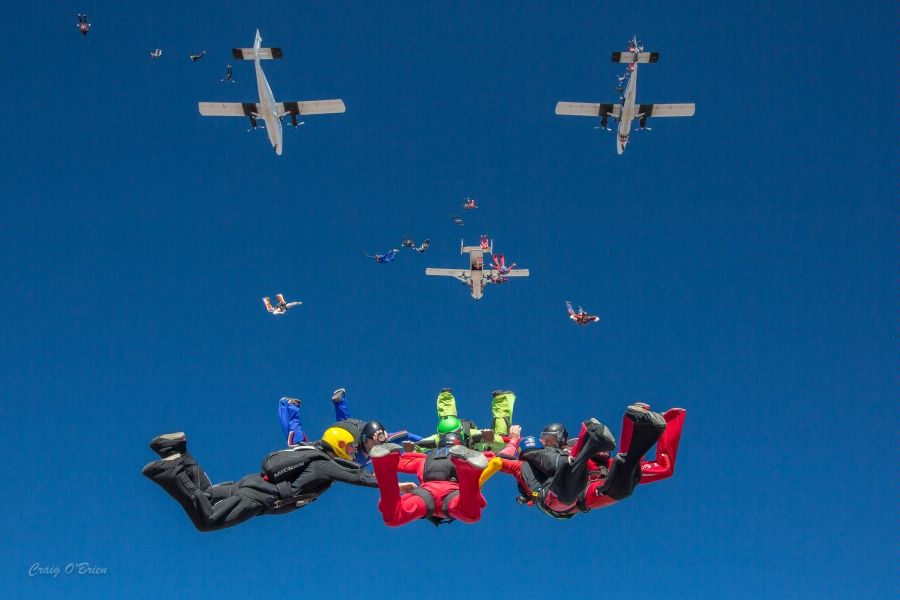 For this Spring Fling novice (yes, I bought the case!) the 2017 Spring Fling ended three excellent weeks at Perris, following the Big Way and 100-way training camps. And all that with some of the best skydivers around coaching and jumping with us.

More about the organisers later, but as a start – the detailed work that went into the formation design and slot allocation for Spring Fling paid off with challenging and fragile formations that brought out the best in all of us.

Over four days (18 to 21 May 2017) we got in all of the planned 20 jumps in perfect southern California weather, all with oxygen from 16,500 feet from two Otters and a Skyvan taking the lead.

The formations were a joy to behold. Take the “drone” as an example, first two jumps on day one that ended in a completion, a second point, plus three-quarters of the grips on the third. 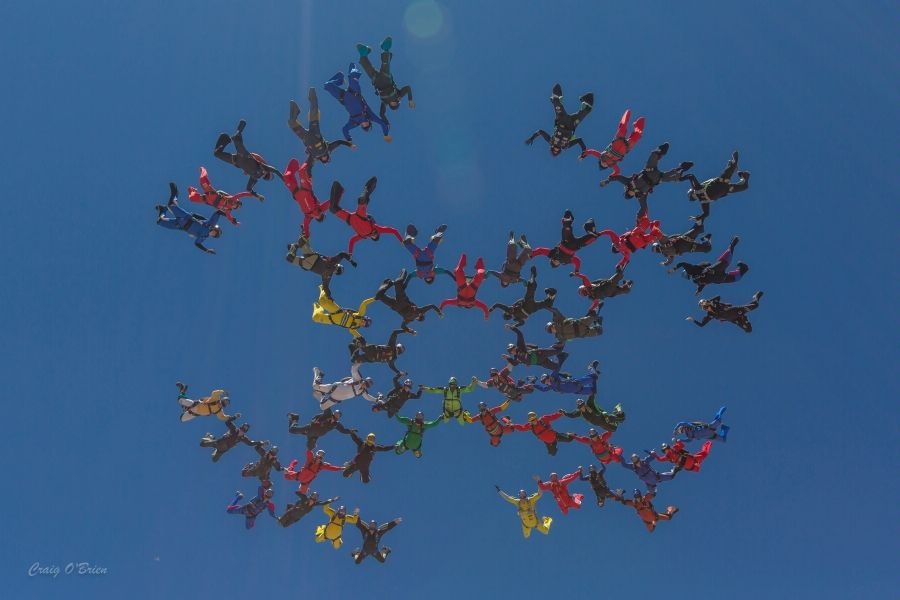 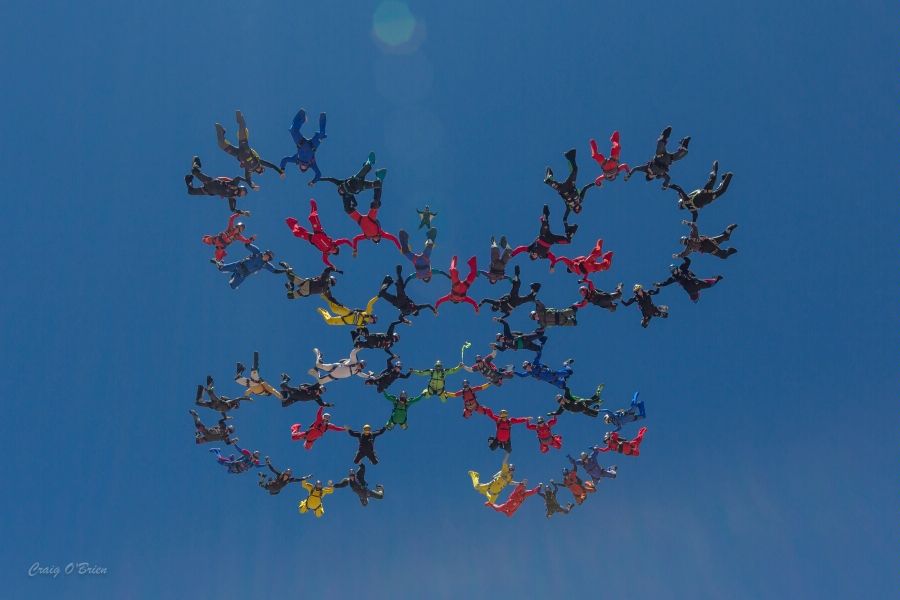 As my Australian mentor pointed out, the Spring Fling is a performance event, not a learning camp, but it’s hard not to learn from so many excellent skydivers if you have even half a mind to, in terms of both technical excellence (try tracking with Carsten Cooper-Jensen or Larry Henderson) as well as attitude. 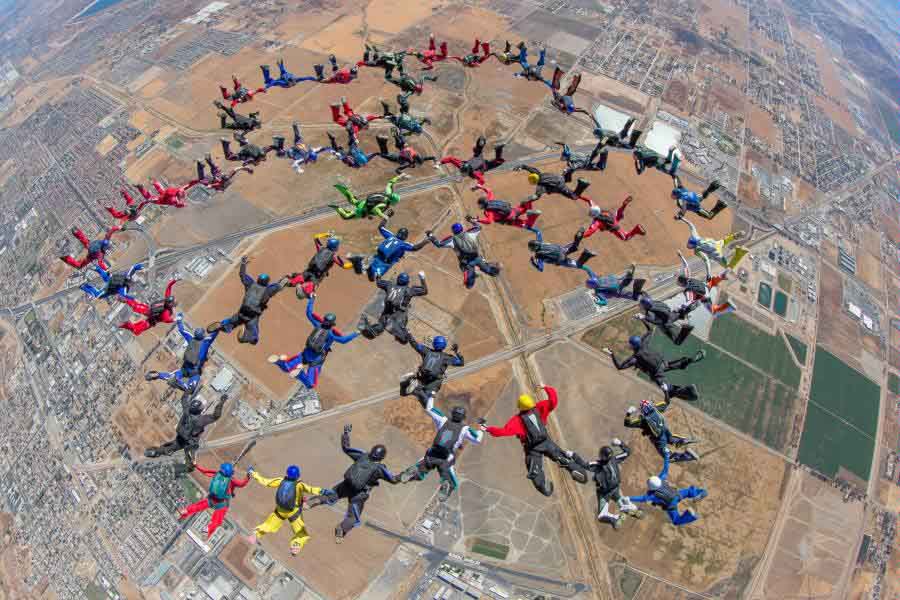 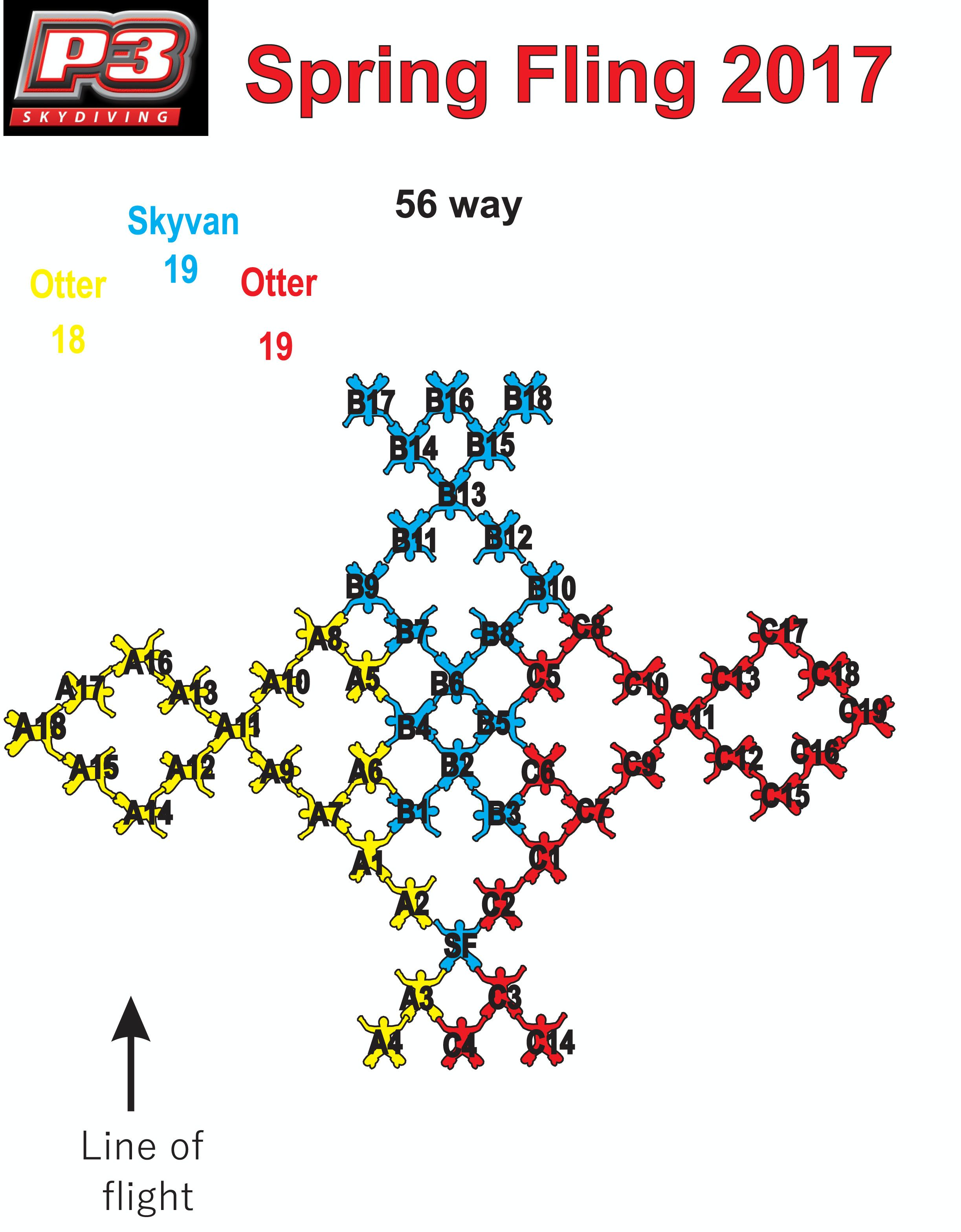 It’s magnificent to share the sky with 55 to 58 (depending on the jump) others and for the entire formation to be in place with no fuss, still and quiet, all heads to the centre, just waiting on another of Mark (Green Hornet) Brown’s streamers to key the change to the next point.

Another highlight was the final two-point formation over four jumps on Sunday: 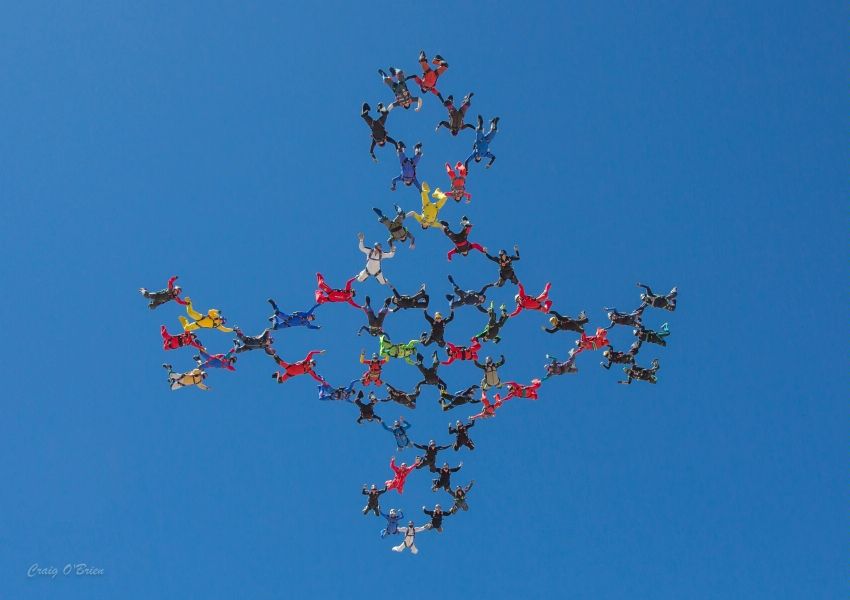 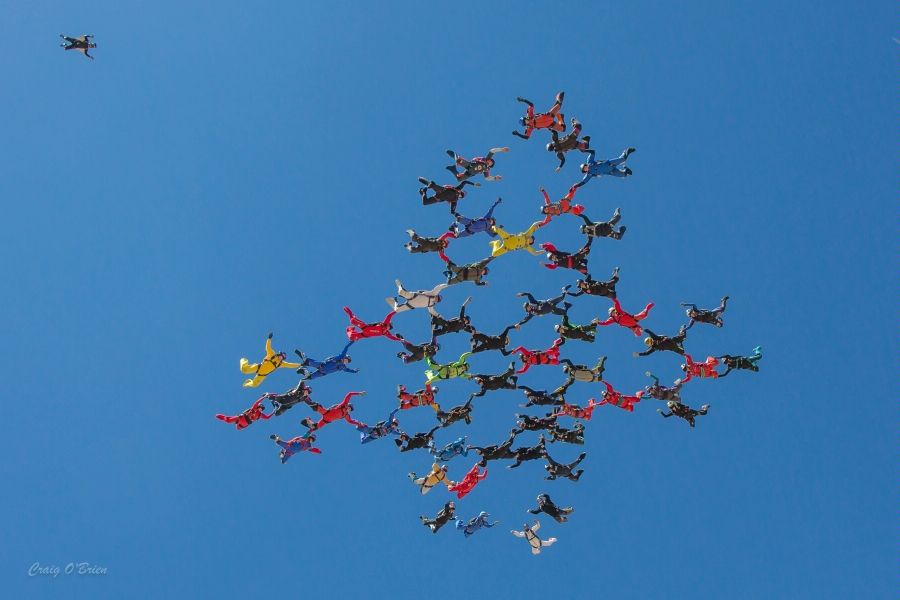 Our congratulations and endless thanks to the organisers and coaches, including: Dan BC with his patient, precise and thorough dirt dives and cuttingly accurate and hilarious commentary on any error that the camera picked up (Doug Pinkham spelled his name out for me so that he’d get a mention, so he gets one for landing against the arrow, an event of which Dan took full advantage).

Kate Cooper-Jensen for her patient and thoughtful guidance, and for winning the battle to lie formations down on the grass.

Doug Forth for his unstinting advice and support and for spotting every – and I mean EVERY – wrong grip or move during debrief videos, leading to a cache of beer donations that could have drowned an army. 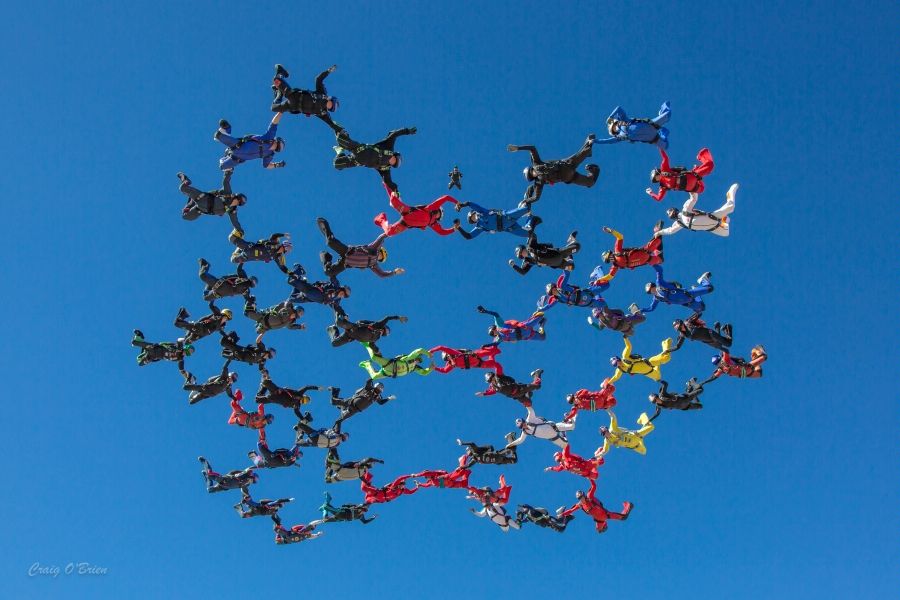 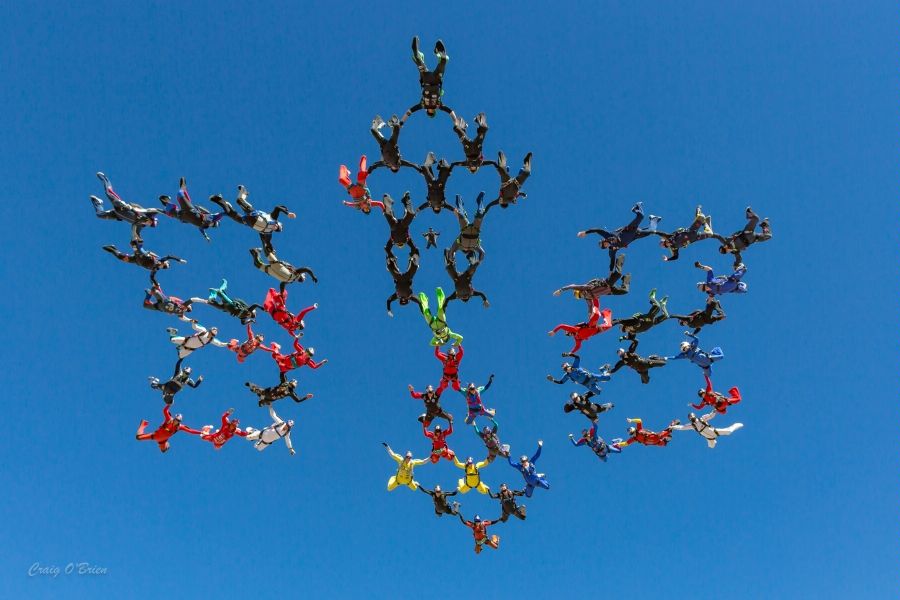 Video of the save of the century (Dan & Mark)

Again, the incomparable Larry Henderson and Carsten Cooper-Jensen for their guidance, support and personal example throughout.

Also special mention of, and thank you to Craig O’Brien and Terry Weatherford for excellent footage and photos of the event and the preceding P3 camps (visit skydivingphotography.com and check the events out).

And no event such as this works without great participants. Over the four days I got to know many of them; they are all wonderful people and it’s a good feeling to be part of this skydiving family. 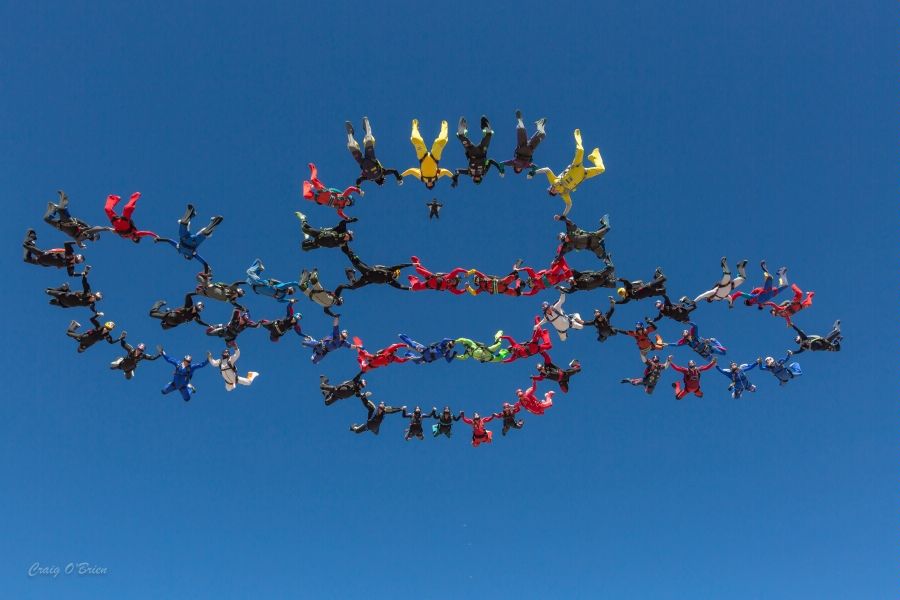 Finally I’d like to mention our friend Alexander from Germany, who earned renown (and a deserved front row seat at debriefs) for taking and posting on Facebook photos (on at least one occasion alone 80+) and video at every conceivable time and from every conceivable angle, adding a personal and insightful perspective to an unforgettable event.

Article by Martin (Too Tall)

Photos and video in this article thanks to skydivingphotography.com