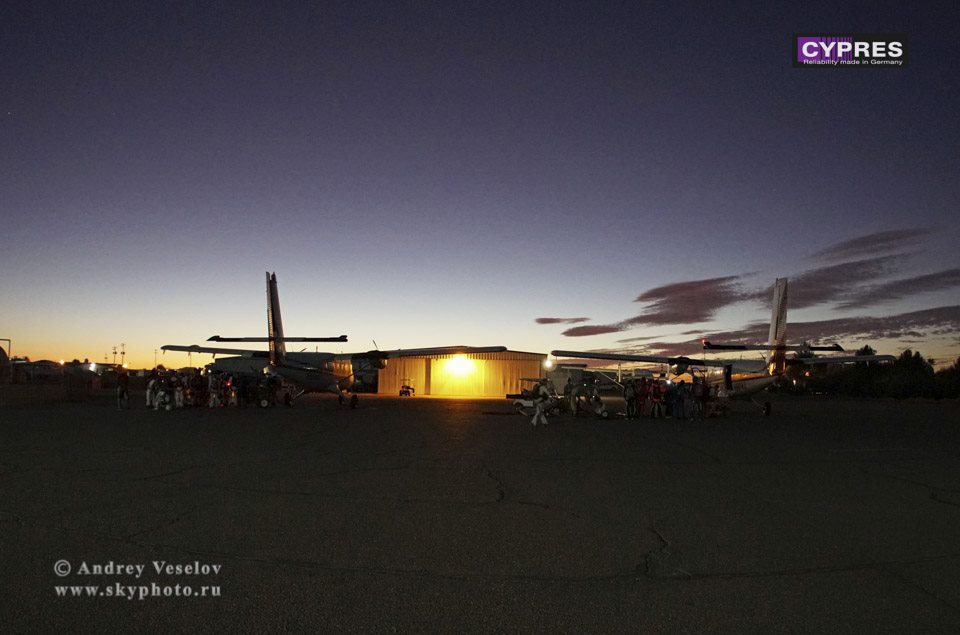 I was intrigued by the idea of a world record AT NIGHT! Three aircraft depositing 64 skydivers, diving into the blackness towards each other .. what could possibly go wrong ?!

Sounds like scary shit to me… Maybe I liked the idea?! To have again those ‘first jump’ butterflies?…

Steve Woodford has been working on night records for umpteen years. Firstly as an active organizer of night jumps; secondly to get the FAI to recognise a night record as a category, and subsequently organizing the current official World Record 40-way night jump last year. The participants’ list was stellar, with many names I recognised as excellent, safety-conscious big-way jumpers. 32 of the 40 skydivers on last year’s record had signed up again, that’s testament to it being a well-run event. I was going to be in Arizona anyway at Sequential Games 217-way World Record event, it made sense to stick around for the Night Record. 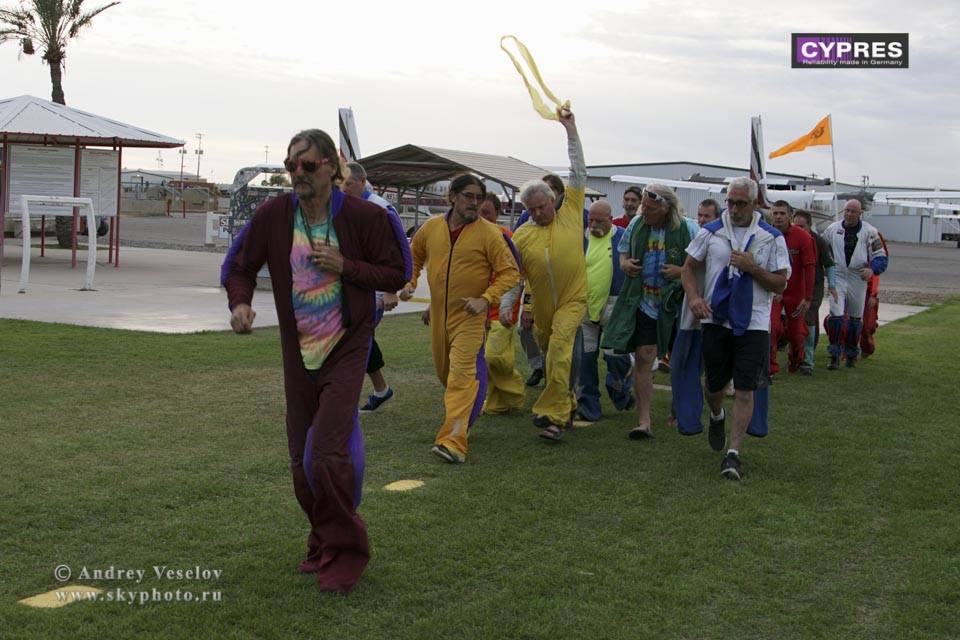 Now I just needed a true friend to be petrified with… “C’mon Marloes, when’s the last time you were scared before you got in the aircraft?” .. I sold it to her, and then there we were in Arizona, two days beforehand when it hit us what we were letting ourselves in for… then discussing, like AFF students, if we could be inflicted by a mystery virus, and secretly hoping for bad weather!

Monday 30 October arrived and we met at Skydive Arizona. The plan was three jumps in the day; 64-ways from a Skyvan and two Otters, practicing the build and the unusual tracking plan. Then, a dress rehearsal jump at twilight, wearing lights, followed by a night record attempt, taking off at 7:30 pm. Today we were just aiming for one point, though Steve had sequential planned, if time allowed. We were going to 16,000 feet AGL (with oxygen).

I found myself in the plane for the first day jump, with butterflies in my stomach, wondering ‘WTF?!” I was more nervous than all last week on the 200+ ways – this was a simple 64-way and my job was piss-easy! It was the fear of the unknown blackness later! The jump, of course, went smoothly, as the next two did, soothing my nerves. 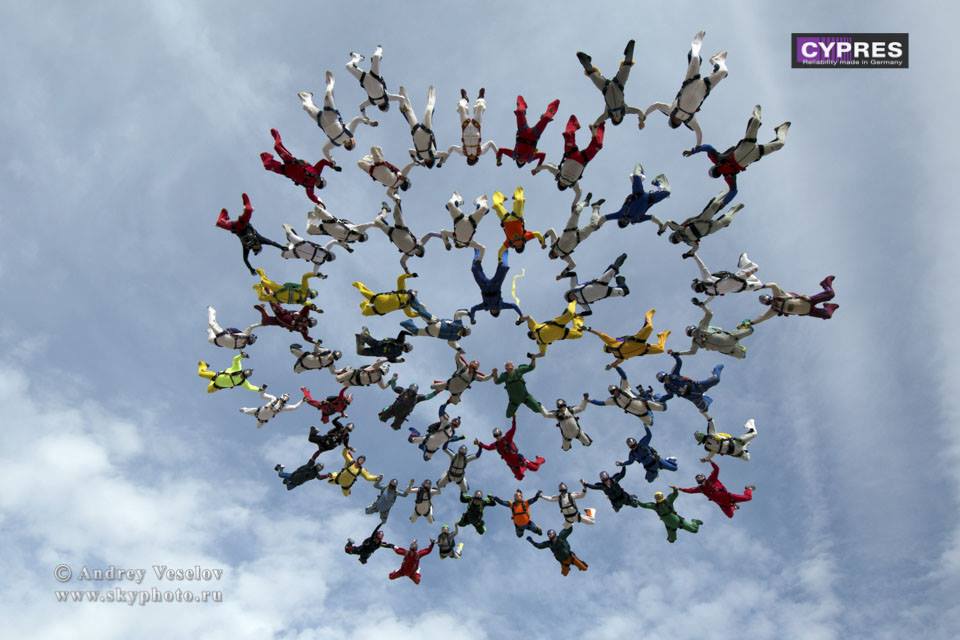 We completed on 2 out of the 3 jumps, and practiced elements for the night jump. We wore colored bands on our designated left or right leg strap, these mirrored the lights we would wear at night to show the five different sectors, and guide jumpers to their slots. The breakoff was the biggest change, with 4 different waves doing short (5 or 8 second) tracks, each with 2 planned opening altitudes, to give vertical separation as well as horizontal. Short tracks make more sense at night with limited visibility.

After opening, we would turn and fly parallel to our planned landing direction, and turn on the red flashing lights we were wearing on our chest straps. After about 20 seconds we were to resume a normal flying and landing pattern.

Next, the dusk jump. We all put strings of color-coded lights on our leg straps to be turned on at the ‘open door’ signal on run-in, and for our sunset dirtdive. 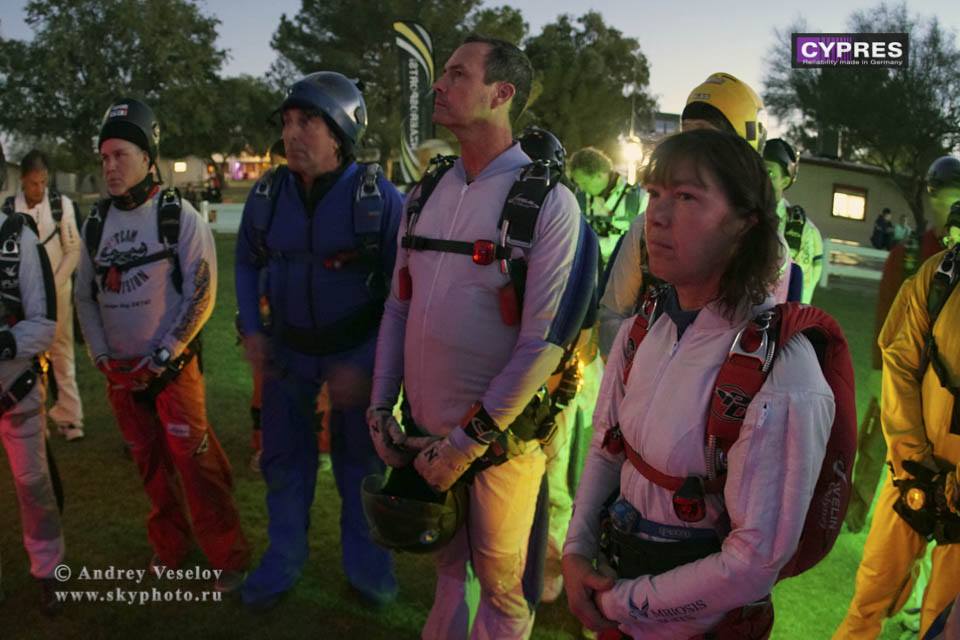 I was curious how much light there would be, with a 5:15 take-off. As we climbed to altitude I was reassured – yes it was sunset but I could easily see the Skyvan and superfloater, just as in daytime, their strings of colored light giving added clarity to the picture.

As they left the jump was smooth – it looked beautiful with a rosy sunset glow and indigo skies framing the building formation, the silvery strings of light on everyone’s leg straps adding a touch of magic. Breakoff went just as planned and was easy to read. On the ground, the video showed we had almost built the point but with one person out. 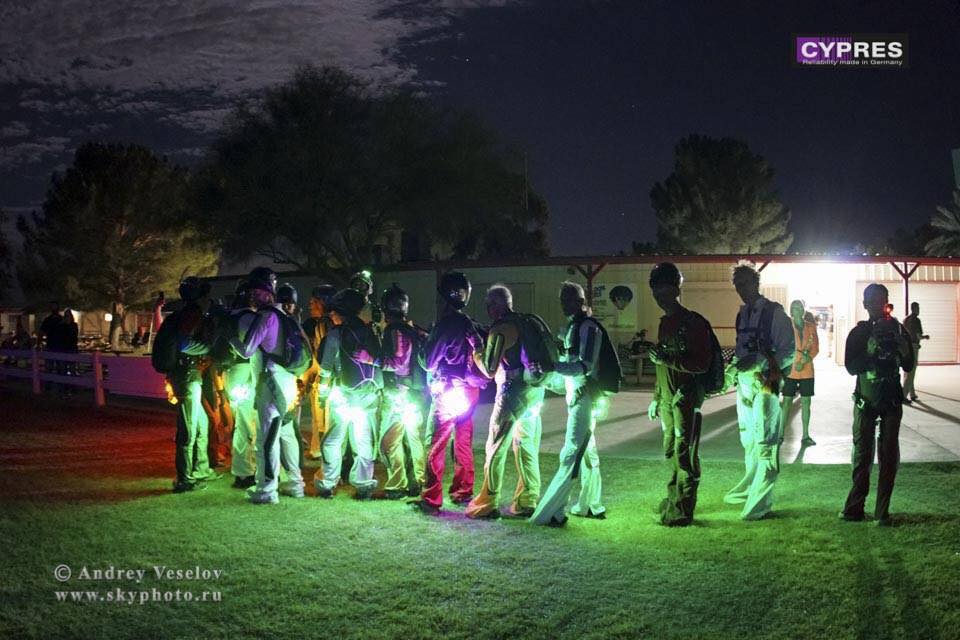 Now for the night jump itself. As we climbed to altitude my nerves went into meltdown mode! As I tried to visualise I realized I had NO CLUE what it was going to look like! My last night jump, an 8-way over 25 years ago, was no prep for this. It was properly dark, the desert looked totally black with just the prison lit up like a football stadium. As Marloes and I did our lucky handshake she whispered “I hate you!’ I understood, I hated myself right then!

Orange light; we opened the door and switched on our leg lights. Green light; climb out.. As I got on the floater rail I was first surprised by the two propellers of our Twin Otter, glowing eerily with spinning stripes, virtually invisible in the day. I could make out the lead white Skyvan with a black hole where the door should be – and nothing else, just a few lights. Was someone stroking my leg or was I imagining things?… 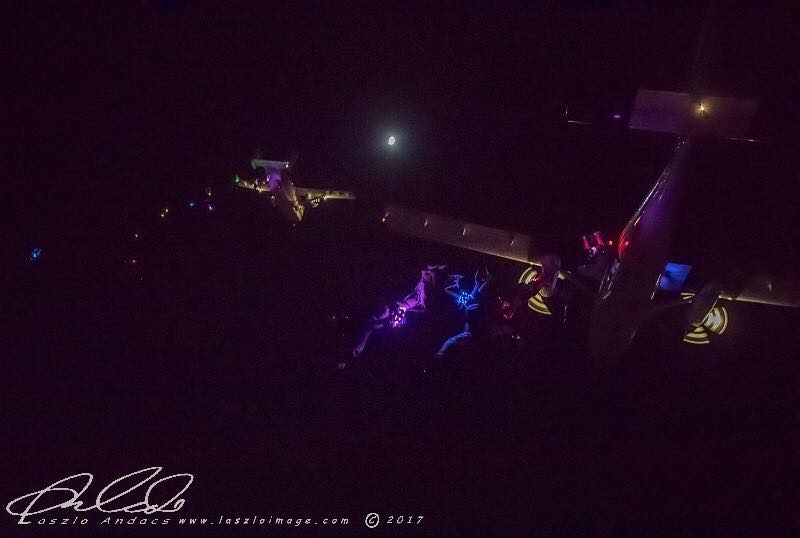 As the red lights of (presumably) the superfloater, Steve, left I boogied into the night freefall surprise.. Wow! Wowee!! I could see glowing sector lights, moving towards each other like glow-worms, each attracted to its own color. It was amazing! A bewitching spectacle, and very clear to read, with the same pattern as the day jumps. In no time at all I was in my slot, double-checked my people before I took the grip, and realized I could see their jumpsuits and colors much more clearly. The cameramen, Laszlo Andacs and Andrey Veselov, must have turned on their helmet lights to illuminate the formation as promised, after abut 12 seconds. I could see a couple of people low as I arrived but I didn’t mind, I was just happy I could see!

Breakoff was happening, I counted off the waves till my turn – yes! I could see Breno in my wave, and the lights of Marcelo, Marloes and Johan exactly where they were in the day. Fantastic! The canopy opened, and I carried out my drills, then checked around me. It was stunning! Gorgeous! I could see scores of different colored lights at different heights, all heading the same way. Super safe and a very special team thing to be part of. 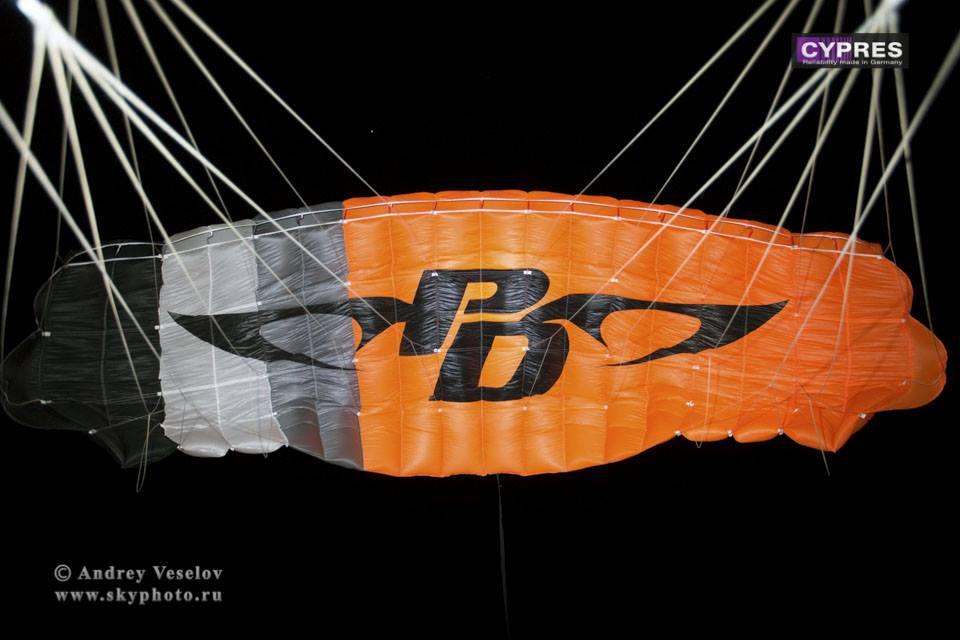 Our landing pattern was to turn into the planned direction, as agreed and as indicated by the lights of a dozen cars, parked in the desert… then make no turns whatsoever, unless going to overshoot. I lined myself up to a line relatively clear of bushes, surprised and happy at how much I could make out. Here comes the ground, flare slowly, oh what are those two lines on the – Ooomph! I hit the ground a bit sooner than I was expecting! But no damage done and no-one to see! 😉 I texted my plane captain to let him know I was ok…

Back at the hangar, Marloes held her arms wide .. “Wow, wow, wow, that was a-mazing! I can’t remember the last time I had a buzz like that”! She had been even more scared than me, shaking in the door but stroking my leg in case I never saw her again! But, like me, the reality was so beautiful she was on a real high. We sat up till late reliving our sights and emotions of this special jump, we were both blown away!

The next day we struggled to build the first point. The fall rate had been on the slow side, as Steve didn’t want people landing with weights at night. Gradually changes were made, to the base build and the line-up but we were still only just getting the formation a touch before break-off. 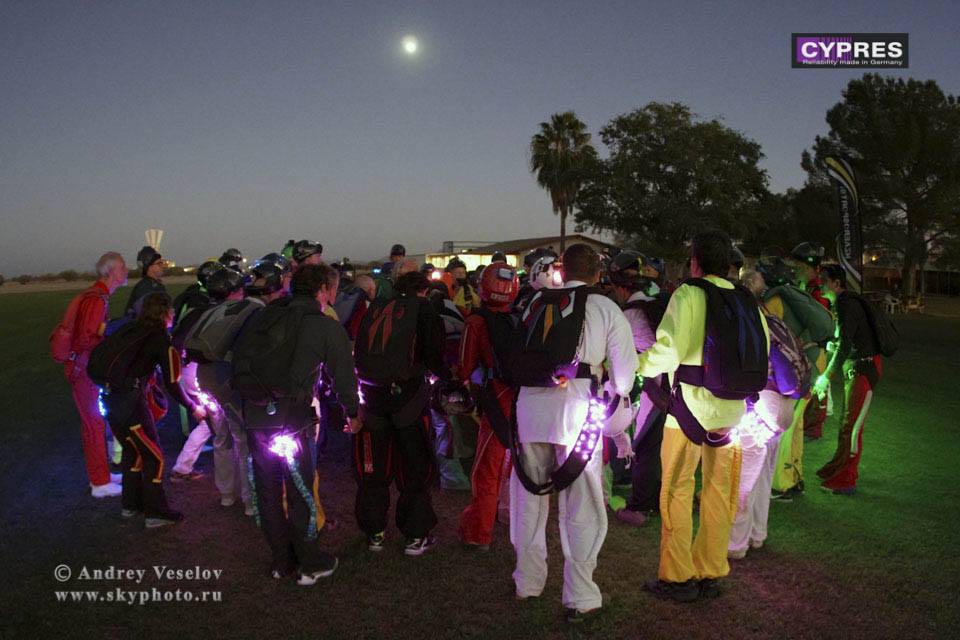 On the twilight jump we were once again treated to a double view of sunset, the sun disappearing over the horizon on the ground, and then reappearing as we climbed to altitude. It was a stunning orange glow with majestic sunbeams lighting up the layers of clouds…

… the same clouds that proved to be our downfall, as the available altitude dropped to 11,000 feet, so we brought the load down. The night jump was canceled as we could barely see the moon. An amended plan was made for the next day, with a midday meeting and two night jumps possible, our last 2 chances for a World Record.

Overnight the captains worked miracles with re-engineering and pep talks – suddenly we had a 12-second hold on the first jump! This followed by another quick build meant confidence was high going into the night jump. 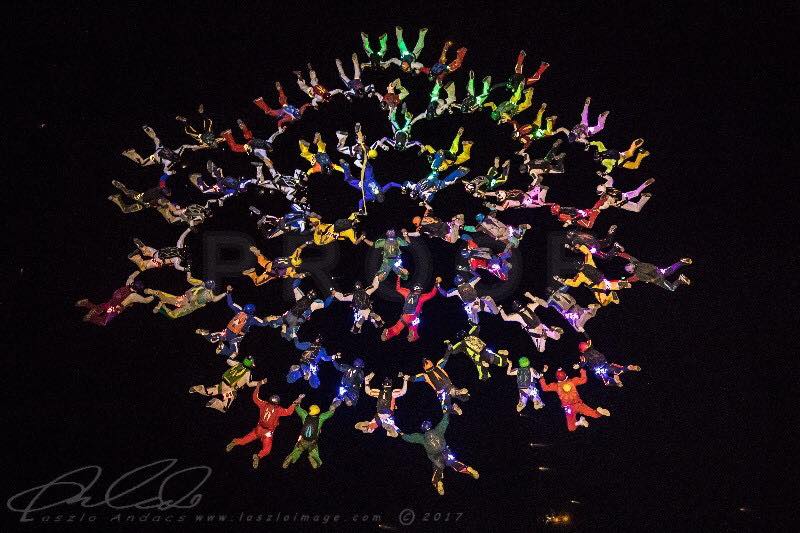 As we climbed to 16,000 feet the spectacular views of the twinkling lights on the ground made me appreciate this opportunity. I wanted the jump to work on this attempt, but if it didn’t I’d get the chance to see this sparkling view again – win-win! This time my visualization had some realistic pictures and the jump itself was a carbon copy. The build was smooth, the formation flying well, and I had that feeling you sometimes get when you think it’s complete.

Once again under canopy everything looked perfectly set up, and I was able to appreciate the visuals even more. Nearing landing, I saw the ‘black canopy’ Steve had warned us about – my own shadow! The moon was at 94% and lit up the desert like a floodlamp. This time I flared too high but landed fine, after kind of dropping the last 3 feet! Depth perception can be screwed in low light!

Back in the hangar, onsite judge Tim Wagner and two offsite judges quickly ratified the record, to cheers, hugs and a long celebration that kept the Bent Prop bar kicking and screaming!

The record jump and celebrations…

Kudos to the organizers for smart re-engineering, keeping all 64 on the load, and raising the bar by 60%, impressive! The jump included 15 nations. It smashed the official record of 40, set by Steve’s team last year, and the unofficial 50-way in 2000. (See history of night records, at end of article). 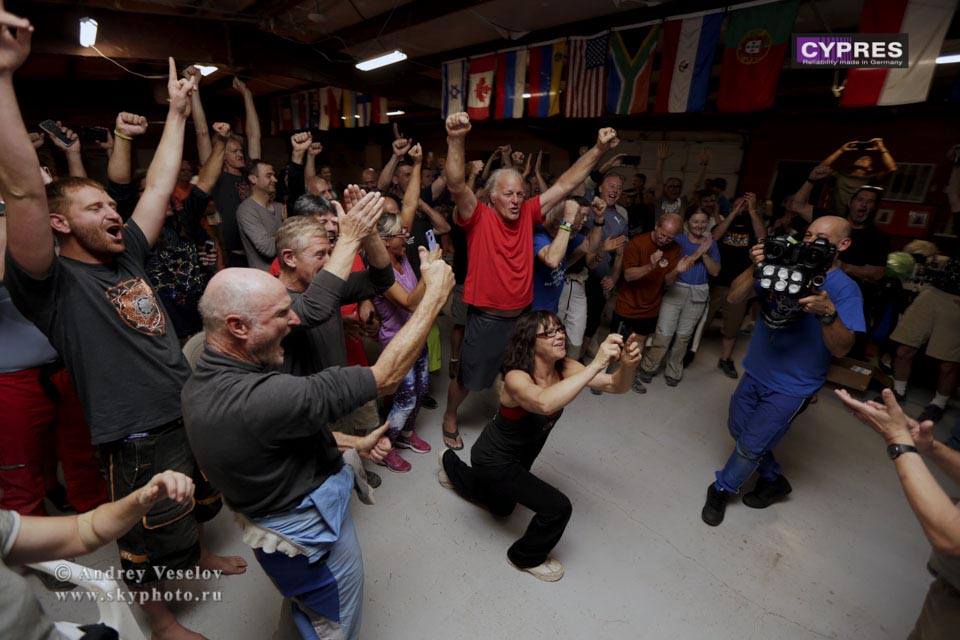 “It was 17 years since the previous Record 50-way (unofficial) at Elsinore that was my target to beat. We did just that!” – Steve Woodford

Congratulations and thanks to Steve Woodford, for his hard work and great plan – the brief and preparation were spot on! Thank you plane captains Kim, Kevin and Craig (the best!), and to the Skydive Arizona pilots who gave us such a consistent set-up. Thank you Sunpath for sponsoring our lights and mouth-watering munchies, and to Maria Wijnker for mothering all 64 of us! Finally, thanks to Marloes for coming to be scared with me! 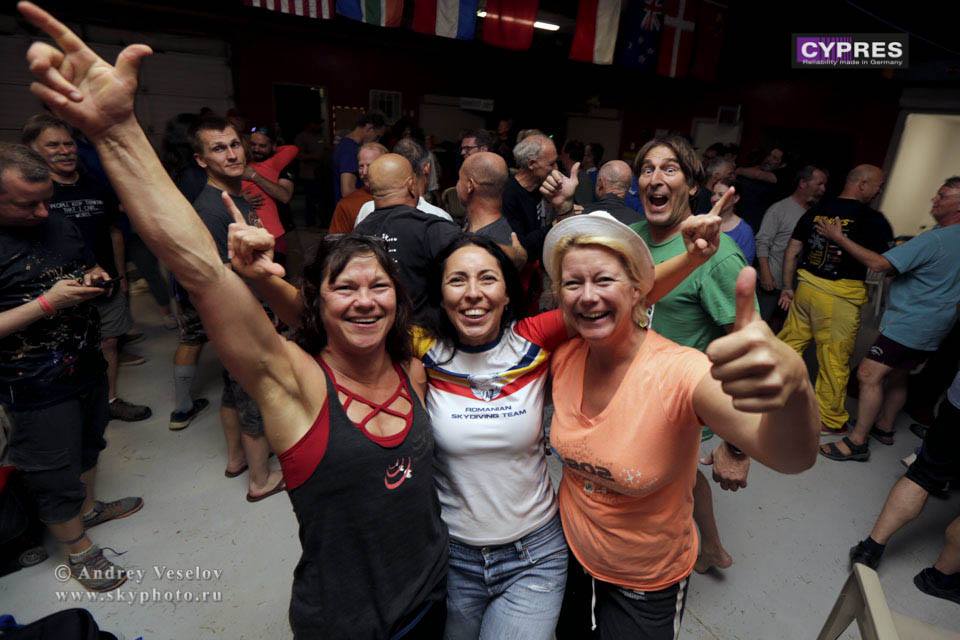 If you ever get the chance at a night jump, take it! The visuals are spectacular, it’s a unique experience, it’s a lot safer than you think – and it’s fun to get the heart rate up!

Here’s what the jump looked like from inside the formation…

Jennifer Jones shares her view of the 64-way record, from inside the formation 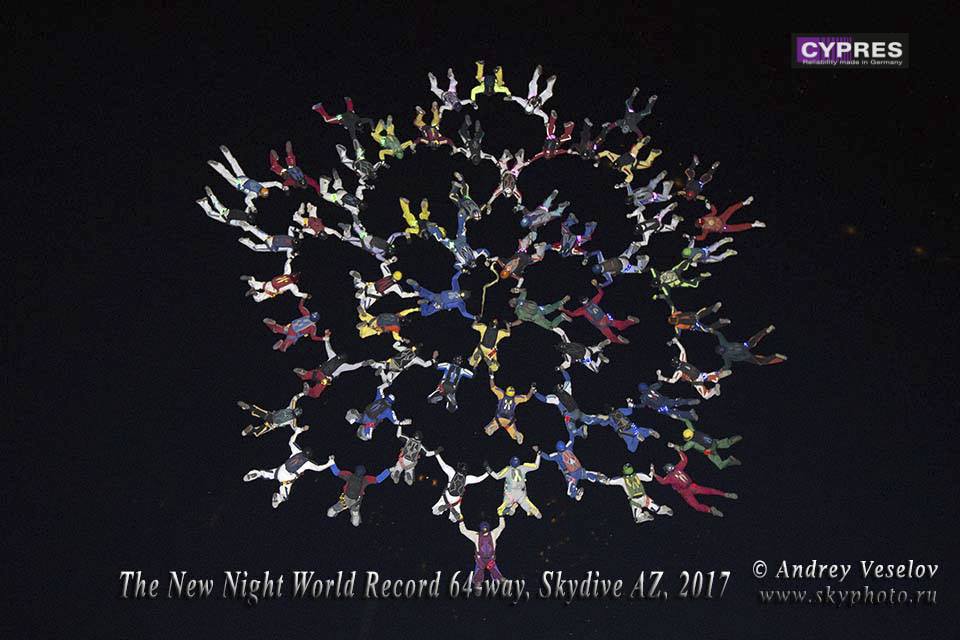