The Mutant has taken the CP world by storm…

The Mutant harness, designed through a collaboration between Vince Reffet and Blikkies at UPT, has made headlines in the canopy piloting community since its official release in October 2018.

The two Italian brothers and PD Factory Team members Armando and Mario Fattoruso set a new Italian national speed record (2.184 sec.) and a new speed world record (1.94 sec.) respectively, having used the Mutant for only 60 jumps for the Italian record and 350 jumps for the world record.

As an avid canopy pilot and gear geek I obviously wanted one as soon as it hit the market since I saw my Flight-1 colleague Pete Allum jump the prototype in Empuriabrava, so I’ll answer all the above questions here using my experience with the Mutant. But, first things first…

What is the Mutant Harness?

The Mutant harness is a purpose-built swoop harness that maximizes performance using the supine position of paragliding or speed riding harnesses built into a skydiving harness.

Vince Reffet was inspired to develop this system in the early 2000s by one of his Speed Riding mentors, Antoine Montant, who’s known by the nickname ‘Mutant’, due to his extraordinary ability. Montant questioned why skydiving harnesses were not more similar to speed riding harnesses, thus inspiring the idea and name to the system.

After developing and jumping his own prototypes, Vince approached and partnered with UPT in 2010 and, with the help of Marc Procos and ‘Blikkies’ Blignaut, developed a system that could be incorporated in a normal skydiving harness and transferred to a supine position after deployment. Ian Bobo from Flight-1 field-tested the system in competition and a training structure for users was developed with the help of Ian Bobo and Pete Allum from Flight-1.

With the Mutant, you deploy in the standard upright position and then transfer into the seated position like in a paragliding harness in a two-step process.

First you release the 3-Ring system at the shoulders, second you unclip a belly band, which in turn allows you to sit back in the supine position.

Should you have a malfunction, the release system is routed in a way that the Emergency Procedures essentially stay the same as in a traditional skydiving harness.

The supine position of a paragliding harness gives more harness control since the canopy is hoisted at the hips and not at the shoulders, which makes weight shift inputs much more effective.

The connection of the risers at the hip allows the pilot to control the pitch just by changing the body position – to flatten by leaning back and to steepen by sitting up. All of this happens without deforming the wing like the toggles and risers would.

So, to sum things up, the Mutant gives more control, responsiveness, speed, efficiency and comfort compared to a traditional harness.

Vince Reffet and Fred Fugen from the Soul Flyers use their Mutants for everyday jumping when they’re not flying the Jetman wings, Derek Dutton uses his Mutant for his job as camera flyer in Hawaii and Pete Allum uses his Mutant for coaching, freefly, load organizing and air-to-air canopy coaching. My plan is to use the Mutant as my every-day rig for freefly, freefly coaching, load organizing, air-to-air canopy coaching and competition.

Can everyone get a Mutant?

To give a short answer: No.

As Spider-Man said, ‘With great power comes great responsibility’. The Mutant is mainly aimed at highly experienced canopy pilots, optimally with paragliding or speed flying experience. It is very sensitive and adds a lot of complexity to the system in an already stressful environment, so UPT did a great job teaming up with Flight-1 setting up a system that ensures adequate selection, training and supervision until applicants are ready to fly their Mutant solo.

The first step to getting a Mutant is to send an application to UPT, which will be forwarded to the geographically closest of the four Flight-1 Mutant Ambassadors:

Some selection criteria include (but are not limited to) jump numbers; currency; experience Paragliding or Speed Flying; experience with small high-performance canopies; and competition or special needs skydivers who can benefit from a more seated position for canopy flight and landing. Based on your application, the Ambassador will decide if you’re ready for the Mutant Program.

Once cleared, the Mutant is ordered like a normal UPT Vector container but delivered to the Ambassador closest to you. The purchase price of the Mutant includes a Flight-1-Tech Mutant course, which includes fitting, rigging, emergency procedures and supervision of familiarization jumps to name a few things.

The course can take up to 3 days, or until the Ambassador sees you ready to progress on your own. In my case the fitting and adjustments took 3.5 hours, there were some minor adjustments after 20 jumps, plus a day and a half working with Pete.

Do you jump your normal canopy during the course?

My normal canopies are a Hybrid Valkyrie 75 and a Peregrine 71 for competition or XRW, but on Pete’s recommendation, I upsized to a Sabre-2 107 for the first jumps on the Mutant. This was great advice as it slowed things down and gave me time to wrap my head around what was going and how the harness feels and works. Jumping my normal canopy would have been manageable, but quite possibly overwhelming and much more challenging.

The Sabre-2 107 was as responsive on the Mutant harness input as a Comp Velocity in a traditional harness, so upsizing was a very good choice to get a feel for the system. It took 12 Jumps downsizing through different wings until I got to my normal wing.

We are lucky to have the European PD Demo Centre here in Empuriabrava, so it was easy to get a canopy to start out on.

So, after going through all of this here’s the question that everyone is really asking…

Is it worth it?

I have put about 25 Jumps on the Mutant now and I have just started to play around with 270s. Currently I feel like I’m rediscovering high performance canopy flight, and I haven’t even started my normal rotation (450s and 630s) or put my Peregrine in. From my limited personal experience with the Mutant, it feels like all inputs are supercharged and another world of possibilities to fly my wing has opened up.

Even with 8,000 jumps and 5,000 jumps on sub-100 square foot canopies, in the beginning the Mutant can be a bit overwhelming, so it is a good thing it is not available to the general jumping community. It gets complex quickly when you remove your slider and make all the other adjustments while keeping an eye on traffic and steering your way to where you need to be, on top of the added sensitivity and changed mechanics and flying characteristics

I have yet to take the Mutant on a freefall jump, as I have exclusively done high pulls to familiarize myself with the system and figure out the mechanics of it all, but I’m very much looking forward to it.

Video showing Julian deploying in a Mutant, and transferring to a supine position… 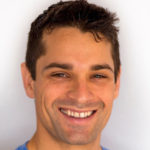 Julian is a full time Flight-1 Instructor, Tunnel Coach, Freefly Coach, Load Organizer, USPA Coach Examiner and Founder of FlyinMynd.
He worked in the sport as AFF-I, TD-I and Camera Flyer for 8 years before going freelance.
Julian loves Canopy Piloting, XRW and is part of the German Canopy Piloting Team.
He was part of the current National German Head down Record (38) and the European Head down Sequential Record (3-point 24-way) as well as the current European Head Up Record (43).
Likes: Canopy Flocking, Freefly, XRW, Canopy Piloting, Dynamic Flying.
Julian is sponsored by PD, UPT, Tonfly, Alti-2 and Cypres.