Musculoskeletal pain and skydiving go hand in hand, even without the effects of traumatic landings, openings or exits

At the beginning of a weekend even before the first plane is in the sky you can look round the packing shed of any dropzone and see people stretching and complaining about their sore back, shoulder, ankle or hangover-induced headache.

If there was a simple pill to get rid of any pain without side effects there would be less need for health care practitioners, and I think many a health care worker would be out of work.

Unfortunately every painkiller (or analgesic), whether bought over the counter or prescribed by your doctor, has side effects. How the different types of analgesics work, how they can be safely combined, and their side effects is often misunderstood. This information is very pertinent to skydivers since the majority of us have suffered from an acute or chronic injury at one time or other.

Some analgesics have been removed from the market due to safety concerns. Risks and benefits must be considered when taking any medication. This article aims to inform the reader of the different types of analgesics, how they can be combined safely for maximum effect, their side effects and the importance of not taking different medications of the same drug type. The article provides basic information about the use of analgesics, but the information is not cast in stone. Things can and do change in the world of medicine and the section about suggested guidelines for use is exactly that, guidelines and not rules.

This article only deals with analgesic medication. There are many other methods for dealing with both acute and chronic pain (Table 1). In addition, there are other types of medications that may be helpful in acute injury such as muscle relaxers that are not discussed here. All the effective muscle relaxers are currently available by prescription only.

Familiar words? All drugs contain information, either on the bottle or on an information sheet about dosage and frequency of administration. Use in children must be modified for age or weight; always consult your physician for pediatric dosing of any medication.

Side effects: A generally safe drug, side effects are rare; can cause serious damage to the liver in overdose, sometimes requiring liver transplantation for treatment.

Ibuprofen is the best-known NSAID, Ibuprofen (Nurofen, US – Motrin) and Naproxen are both available over-the-counter. These two are probably the safest of the NSAIDs. All NSAIDs act to reduce inflammation, reduce temperature and relieve pain, but some are more effective and stronger than others. They should be taken with care by asthmatics. NSAIDs have also been shown to slow down the healing of fractured bones, and so should, where possible, be avoided in that situation.

Different preparations are available, such as oral tablets, suppositories, injections and topical gels; most use oral tablets almost exclusively. NSAIDs are useful in the treatment of inflammation related problems such as arthritis, tendonitis and acute muscle strains, and in such situations can be better than an opioid (see 3, below). They work best when taken regularly in the acute setting for as long as symptoms persist. Different NSAIDs should never be used together, due to the increased risk of bleeding and stomach irritation. People on long-term NSAIDs are sometimes given a second drug, which protects the stomach. This can either be as a separate tablet (like an antacid medication or a combined tablet, such as Napratec, a combination of naproxen and misoprostol, a stomach protector. In the US all the NSAIDs have an FDA Black Box warning for both stomach upset, bleeding and also acute cardiac events. In rare cases NSAIDs can cause kidney failure requiring dialysis for treatment.

A more specific type of NSAID, called COX 2 inhibitors, are available by prescription. Celecoxib (Celebrex) is the only currently available medication in this class. This medication has fewer gut side effects but a higher rate of cardiac effects, which have led to limited use of this class of medication.

Aspirin is a good mild pain reliever which, like paracetamol (acetaminophen) also brings the temperature down. It should not be given to people under 16, those with asthma or stomach ulcers, or anyone already taking anti-inflammatory medication. The blood thinning effects mean that it’s prescribed for people with heart disease, and it tends not be used often for it’s pain relieving properties, taking a back seat to the other analgesics. Historically, high dose Aspirin was used before the advent of NSAIDs for common use.

Note: NSAIDs or aspirin can cause severe asthma attacks in some asthmatics. If you are asthmatic and have never taken either, it is best to consult your doctor prior to taking them.

Side-effects: Nausea and vomiting (particularly in initial stages), constipation, itchiness and drowsiness; larger doses produce respiratory depression and drop the blood pressure. In addition, recently it has been identified that a small percentage of patients may become tolerant or dependent of opioids even with a short course of treatment. Common opioid prescription has been partially implicated in the increased incidence of heroin use and overdose.

This group of analgesics were originally derived from the opium poppy, hence their name. They have a wide range of strengths, ranging from the mild e.g. codeine, through tramadol and pethidine through hydrocodone and oxycodone to the strong and well-known morphine and the even more potent and dangerous fentanyl. They are better at relieving a dull chronic pain than an acute injury pain, due to their method of action. They do not have the anti-inflammatory or anti-pyretic properties of other analgesics. They have strong addictive properties and should be used with extreme caution.

The common weak opioids are codeine phosphate and dihydrocodeine (Not usually seen in the US). These may be combined with paracetamol (acetaminophen) as mentioned previously. Only the weakest combinations are available over the counter, the others are prescription only. There are no narcotic pain medications available over the counter in the US. Bowel programs to enhance motility and flow in addition to laxatives are often used to counteract the constipatory side effects of opioids.

The first step in treating pain should always be to use conservative measures such as Rest, Ice and Elevation. These underused techniques can give considerable relief and should not be ignored. Other non-medication alternatives are listed below.

If choosing to take medications, whether for a simple headache the morning after, or a serious ankle sprain, it is always best to take an analgesic with the fewest side effects initially i.e. paracetamol (acetaminophen) or naproxen. It is important to remember paracetamol (acetaminophen) does not have any anti-inflammatory properties and therefore an NSAID can occasionally be more effective when the pain is caused in conjunction with inflammation due to soft tissue damage, for example muscle sprains.

If pain persists first try adding an occasional NSAID, such as ibuprofen or naproxen, when the pain is at its worst. If this is not effective, then take the NSAID regularly, and continue to take the paracetamol (acetaminophen). These two distinct classes of medications are safe to take together.

With continuing pain, either ibuprofen can be replaced with a stronger NSAID, or an opioid can be added, such as hydrocodone. If a paracetamol (acetaminophen)-opioid preparation such as Norco is taken, it is then essential to stop taking the single paracetamol (acetaminophen) tablets as well because of potential paracetamol/acetaminophen overdose. If despite the use of all three types, the pain is still uncontrollable, then the medications can be shifted to stronger opioids. This increases the incidence of dependence and addiction and should be avoided.

If considering the need for any medication beyond over-the-counter medications it is probably the time to consult your doctor!!

The most important caveat with the guidelines above is to always be aware of the cause for the pain. In the same way that the quickest and best relief of a burn is to remove any source of heat, it is equally important to identify and treat the cause of pain. Pain is a message from your body that something is wrong. Ignoring it firstly does not allow the body to heal, and secondly, can worsen the damage and the long-term outcome.

Skydiving, like most sports, causes acute as well as chronic injuries. Chronic injuries are things such as “Packer’s knee”, inflammation of the soft tissue of the knee from repetitive kneeling during packing; “Tail slot shoulder”, the painful shoulder of the tail in 4-way who spends most of his/her time hanging down on exits from one arm; and “Camera neck”, self-explanatory. Shoulder injuries are some of the most common chronic injuries suffered by skydivers. The list of acute and chronic injuries is endless, without even looking at the POPs population out there. While analgesia can reduce the pain caused by these chronic injuries, avoiding the damaging stimulus is the best treatment. Rest also works, for the same reason but is best conducted under the watchful eye of a good physiotherapist (physician or physical therapist) (yes – too much rest, or the wrong kind of rest is as bad for you as too little). Continuing with analgesic medications can, at best, slow down recovery and, at worse, lead to worsening problems.

Analgesia is useful for acute injuries caused by bad landings, heavy contact with the plane door on exit, openings or incidental contact after exit. If the pain doesn’t improve it suggests that what was thought to be a sprain may actually be a fracture, or that an acute injury is becoming chronic. So if the pain doesn’t improve over time the best advice is to seek expert help from a doctor / physiotherapist / osteopath / etc.

Hopefully this article has shown that a quote from a cheeky editor that “We eat ibuprofen for breakfast when we’re training.” may be reasonable, but only with complete information. If you have any concerns, consult a health care practitioner you trust (doesn’t have to be a doctor), who should be able to offer further objective advice. 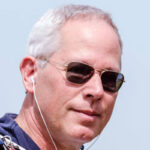 Dr. Bob is an emergency medicine specialist based in Michigan.

He has over 7000 jumps, is a big-way enthusiast and a World Team member. He enjoys travelling around the globe with his lovely wife, Jeanni, taking part in different skydiving events.