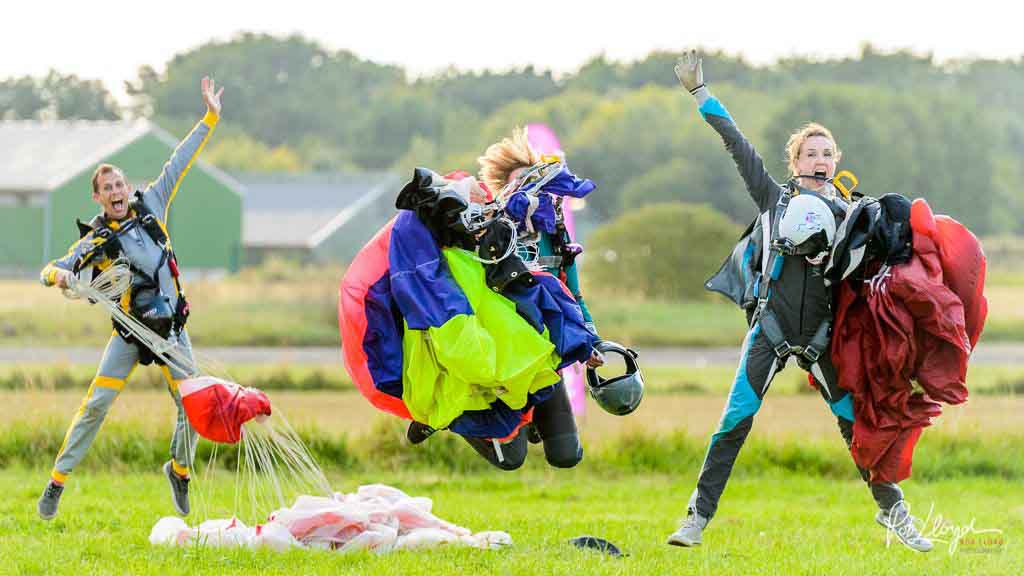 Freestyle has become a compelling element of tunnel meets across the globe in recent years and the event has received a great deal of media interest. Consequently I was expecting a fair amount of competition this year in this category at Nationals, as this element of the sport has grown in popularity. 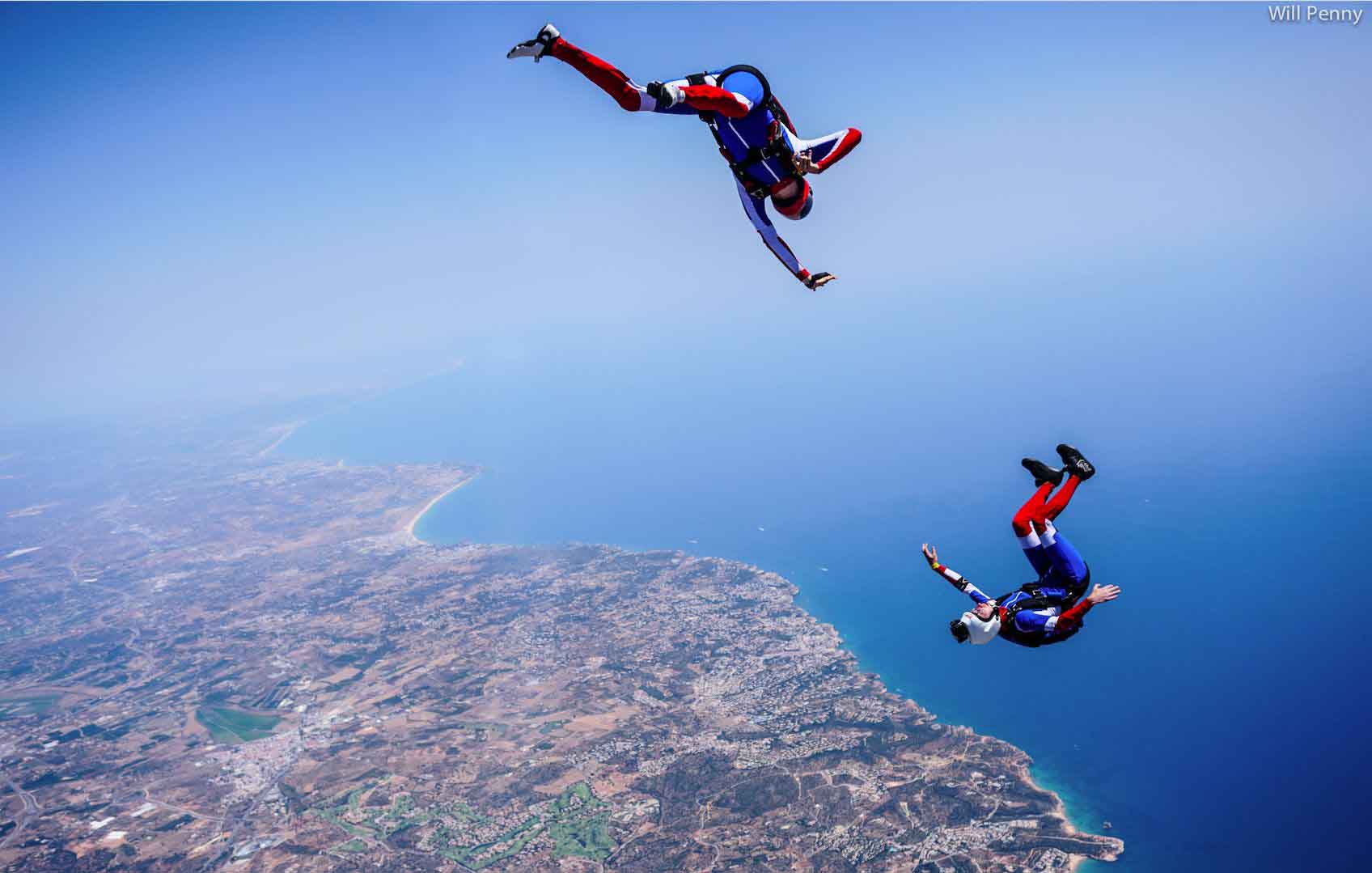 4 teams registered, I had expectations of 6, with at least 4 teams fighting it out for the World Meet slots next year, this was probably down to injuries (Alki, Eve and Emma you were missed!). Volosity Freestyle were always going to win out this year, Jamie Arnold (performer) and Dan Guest (camera), with a fluid free routine. What always amazes me about Volosity is how well Jamie and Dan work together, it’s almost symbiotic! 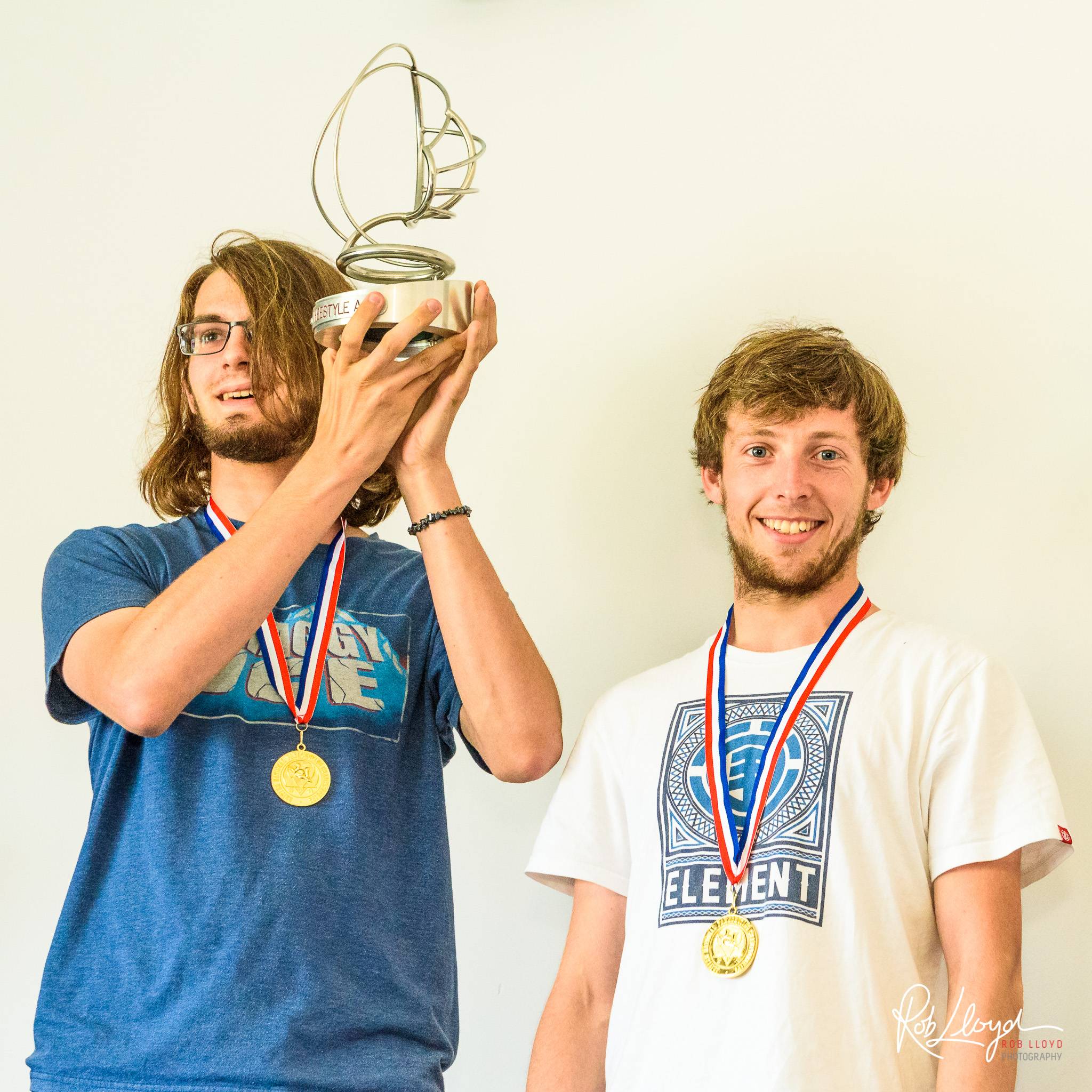 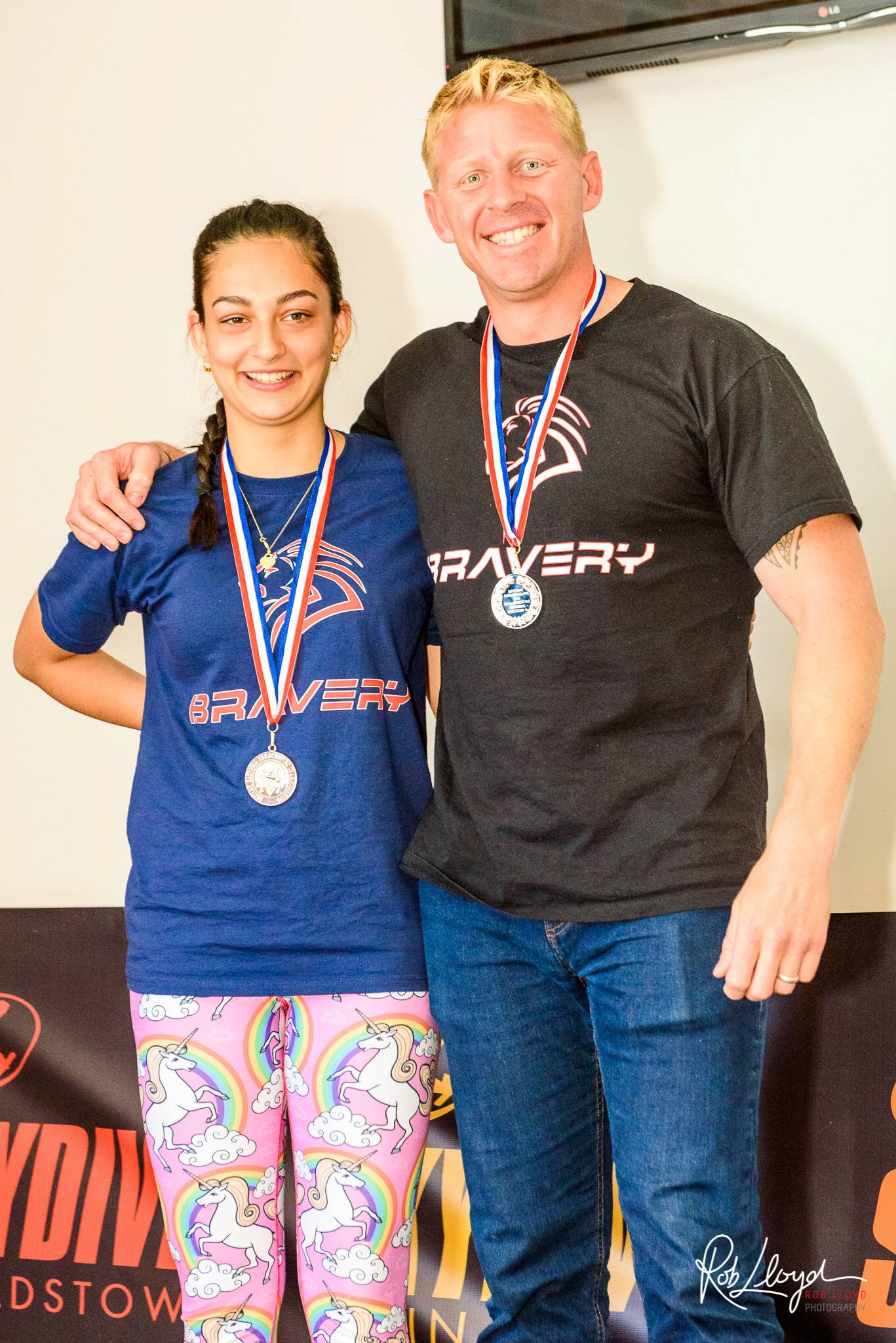 The judges thought that Nova had the better free routine than FSU, Nova’s routine was extremely competent, flowing and well put together (Ed has received some coaching from one of the world’s finest, Inka Titto and it shows in Nova’s routine), but FSU had the edge on the compulsories. FSU’s routine was handsome and ambitious but not always executed to their expectations, but shows the innate talent that the team have and give us a glimpse of what we will see in the future! 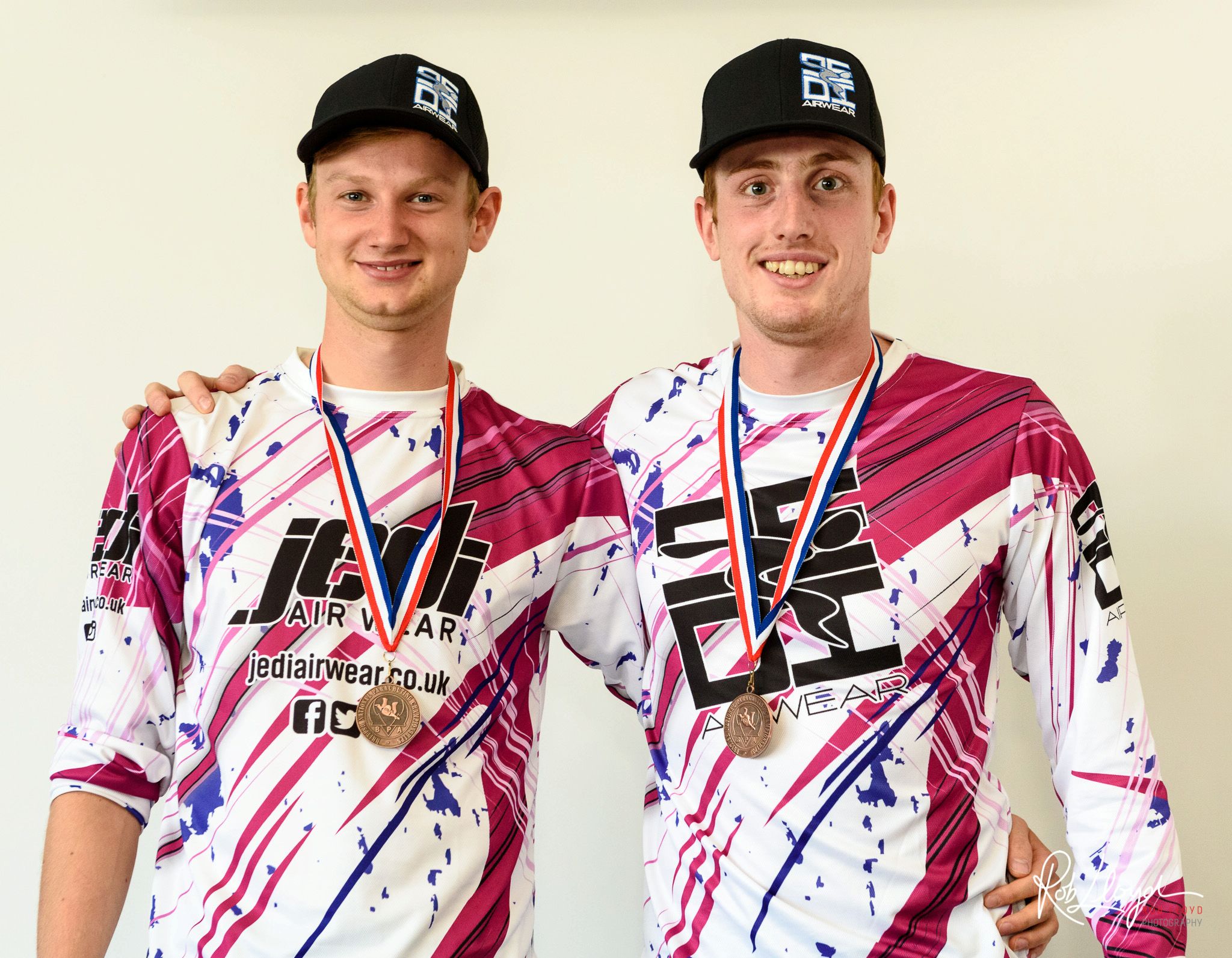 Nova were in front until round 6, unfortunately an oversight from the team (and the JM), meant that they missed their load for round 6 and had an omission for that round.

Controversy aside, it was a fascinating battle to watch with 2 very different styles of flying, but FSU secured the silver and a slot in Australia next year. I very much look forward to the progression in Nova and FSU’s routines over the next few years

A word to Diablo Freestyle, coming in 4th place, Ryan Arkle (performer) and Jimmy McCarthy (camera). They had a very technical free routine, but the judges simply didn’t like it! I guess that’s why this event is called ‘Artistics’, I hope they checked in with the judges to see what they didn’t like about the routine as it was technically on point. 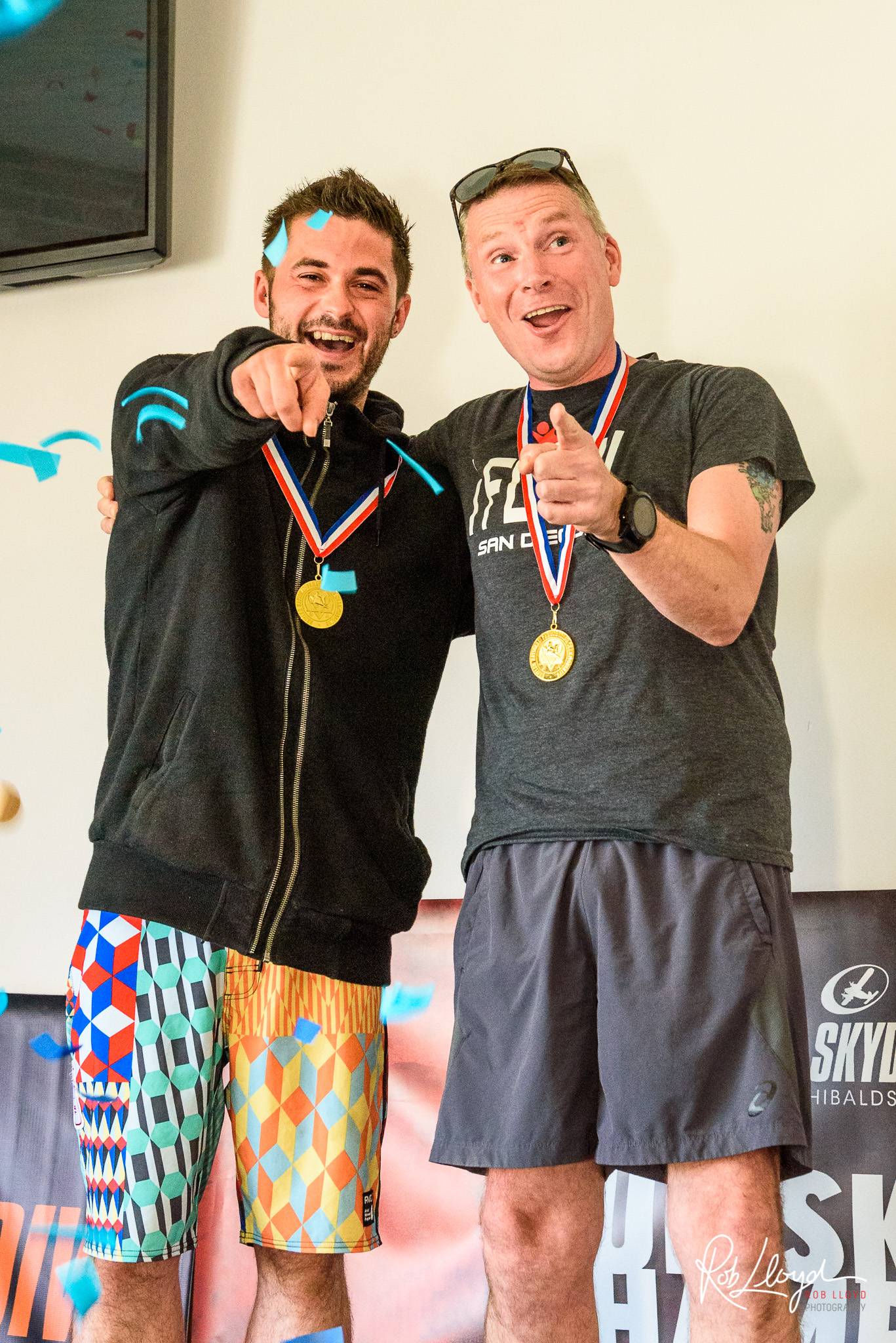 We only had one entry in Freestyle B, Old Kix New Trix, Marcus Budgett (performer) and Andy Godwin (camera), they deserve the bling, at the very least for their camera flying with a few bruised ribs taken in training (you need a little more laughter in your life Godders!) 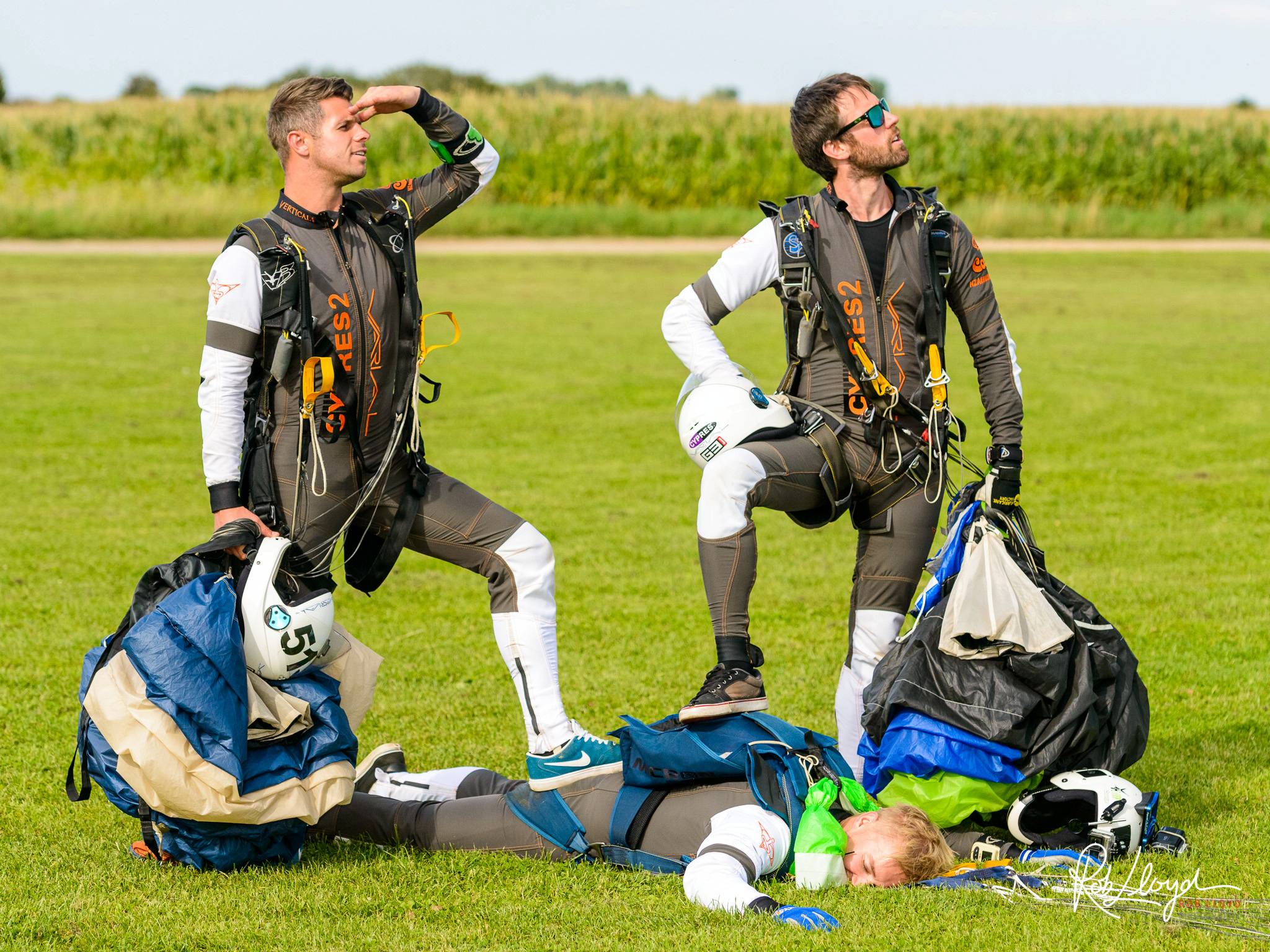 Only 3 teams registered for Freefly A this year, I am not sure where all of the freefly teams are this year?! Maybe other disciplines have taken precedence, or the sheer number of tunnel meets (including money meets) has meant that nationals have less of an allure at the moment. Again I was surprised as it was a selection year. This is my first year of competing in Freefly A, the only way to describe it is ‘nails’; it’s hard, not only flying yourself in every orientation, but learning to fly relative to someone else, and then having an exceptional camera flyer to capture it….’nails’!

the only way to describe it is ‘nails’ 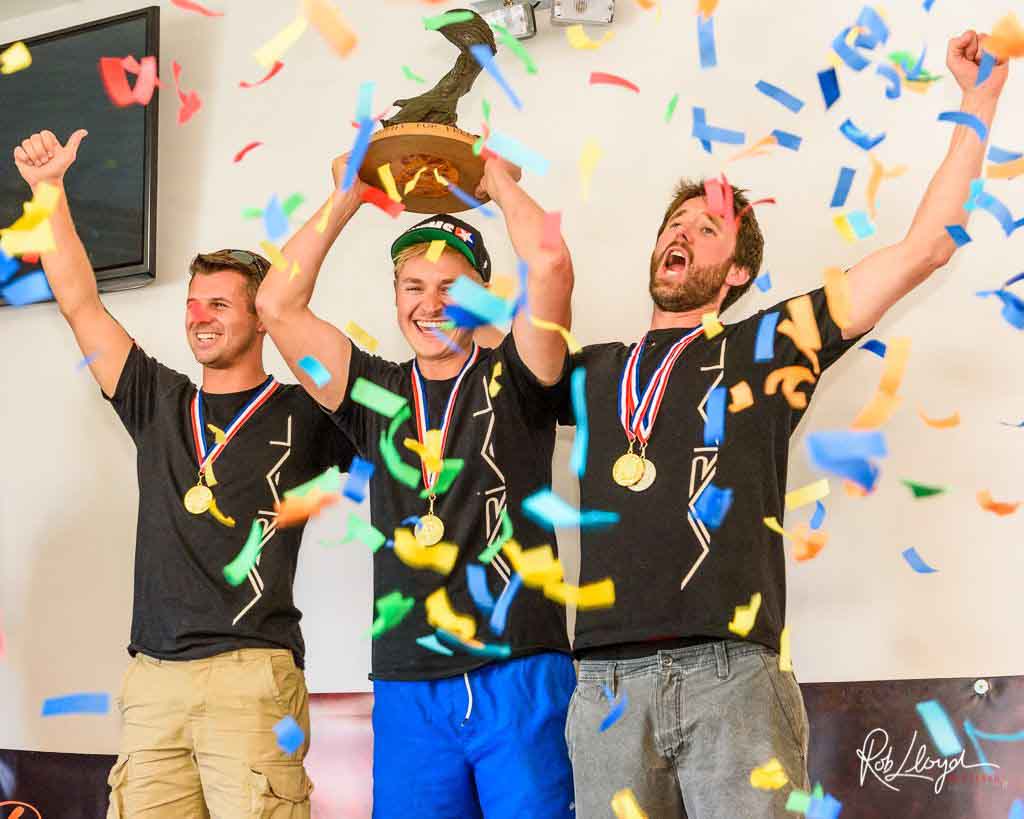 So, it was no surprise that Varial (version 4) comfortably won gold – they are reigning national champs for 3 years in a row now! The lineup this year (Steve Howes and Matty Mitchell, performers, Adam Dare on camera) consisted of former tunnel instructors and professional skydivers. The free routine was really pretty (sorry all had to be said!) and polished, looks like the compulsories bit a wee bit. They only have 80-ish jumps with the new line-up and are planning a big training year for 2018 before the world meet. 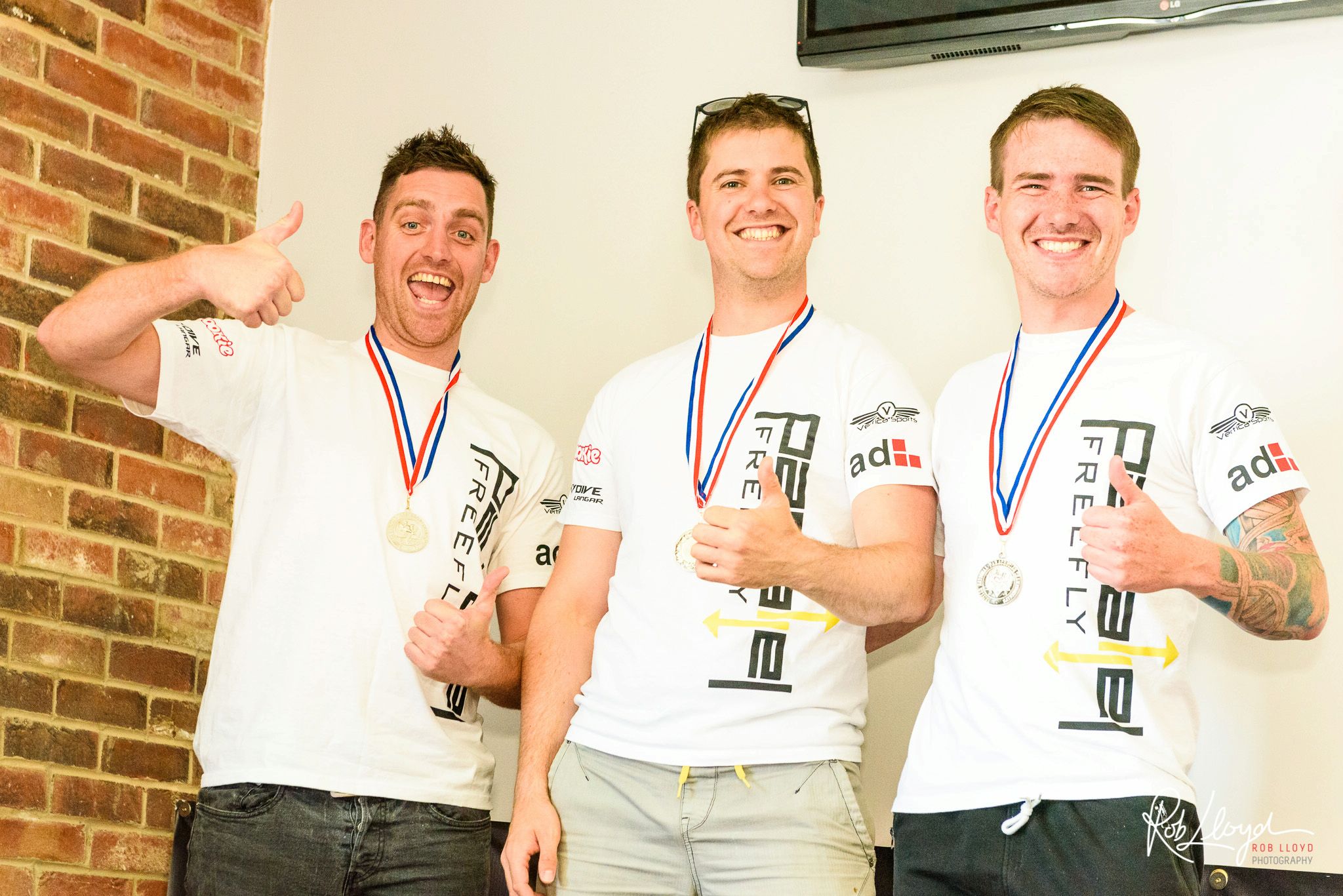 In second place were Parallel (Alan Foulkes-Williams, Rich Madeley, performers and Cookie, Chris Cook on camera), this team got Bronze at last year’s nationals, and their free routine was technical and fluid. Parallel look like a team whose skills have been developed in the air, so the polish will come and I look forward to seeing their routine in Australia. 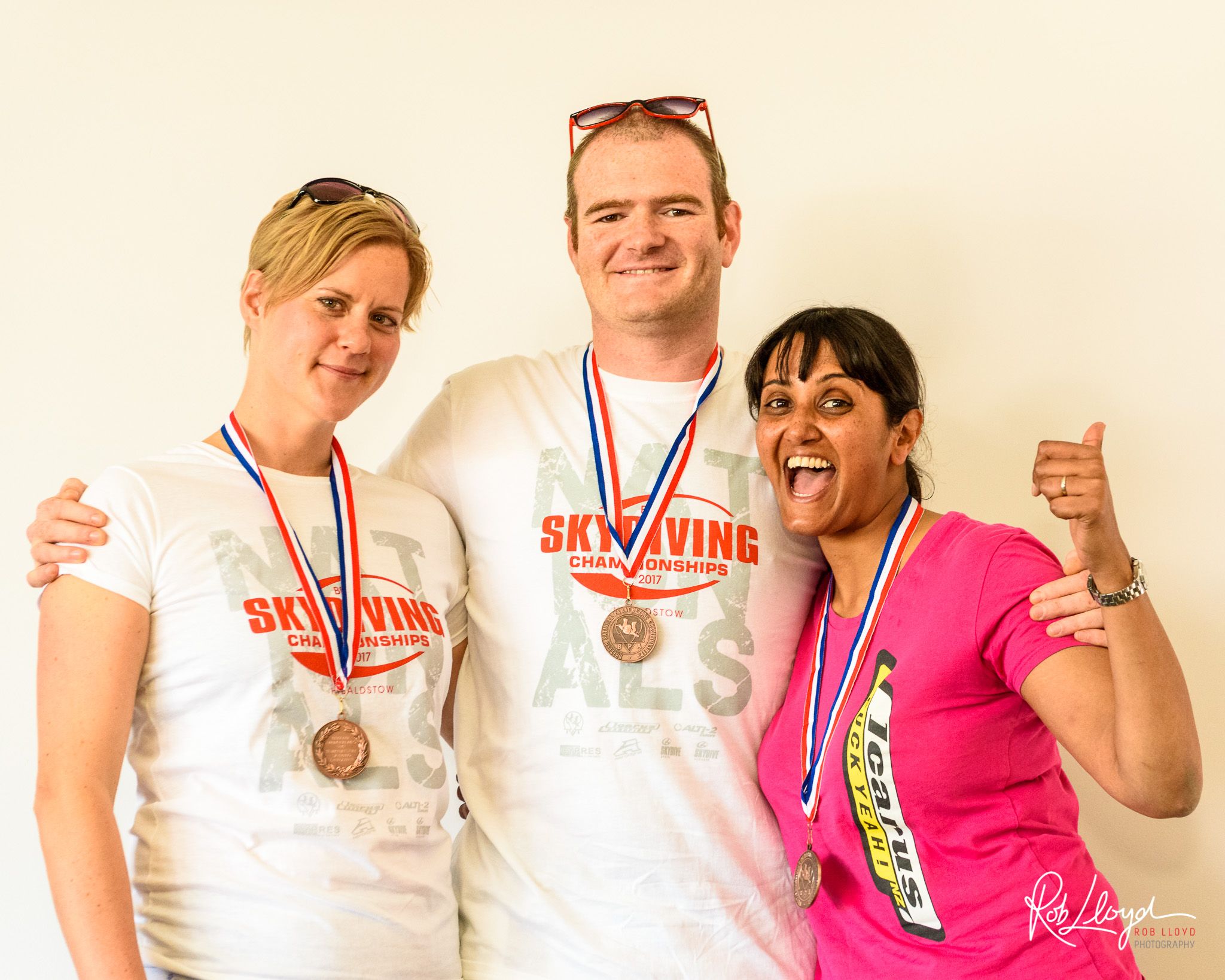 Bringing up the rear were Mass Attack, (A. Lock, Rai Ahmed performers with Tony Lock on camera), they were happy to be part of the event, it’s all new to them!

4 teams registered for Freefly B and it was great to see of the 12 competitors, 7 were women, with 1 all-female team (go 2Radaktyl!).

The medalling teams had all completed some amount of training and we were looking forward to a competition! It was tight between RAFSPA Vulcan (Andrew Beney, El Wilco, performers with Scott Beach on camera) and Mischief & Mayhem (Victoria & Rebecca Bradley performers with Steve Howes on camera). 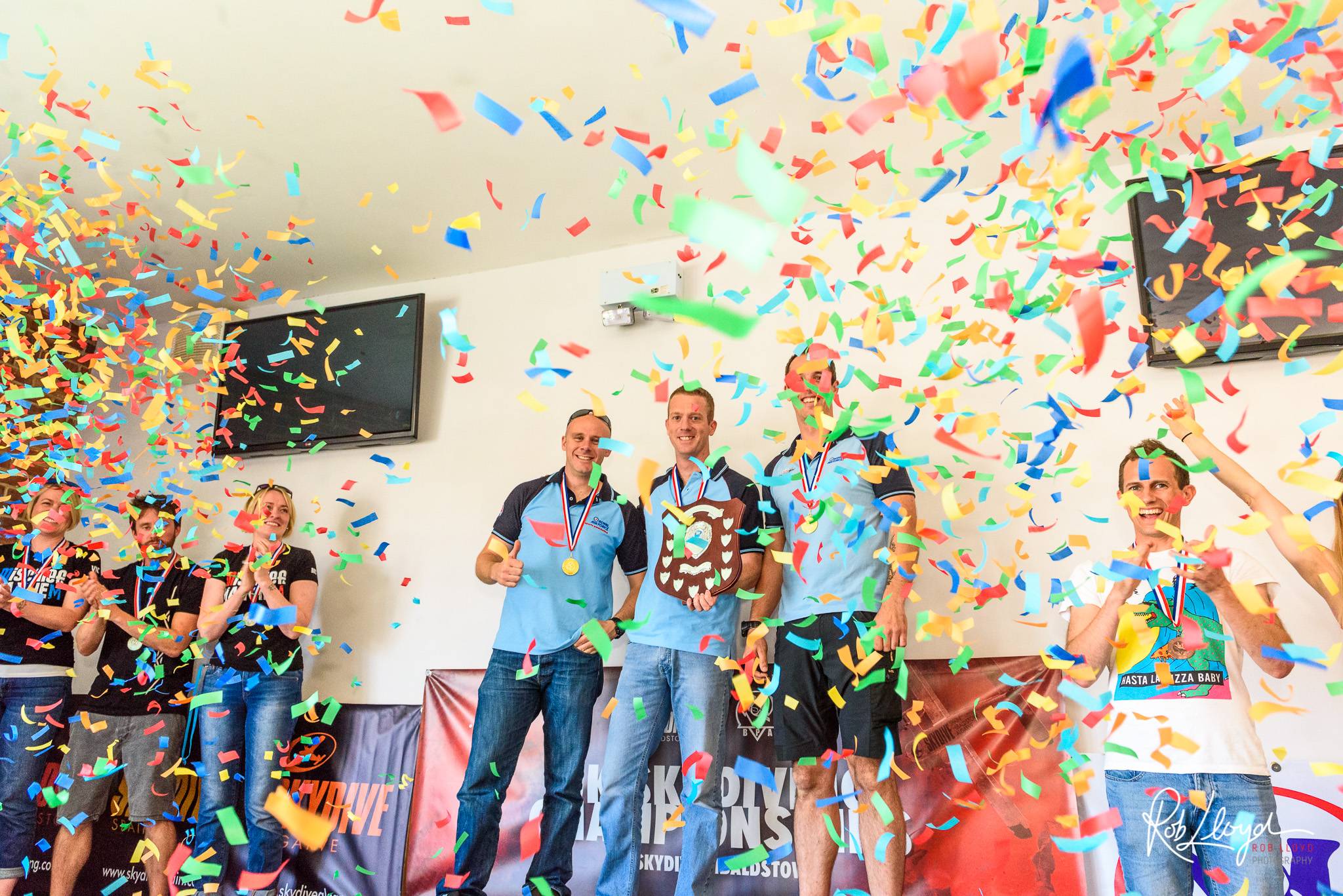 The RAFSPA team edged ahead on their free routine and stronger compulsories. I was pleased to see Mischief & Mayhem, making the most of their strong belly skills on their routine and mixing it up with their freefly moves. 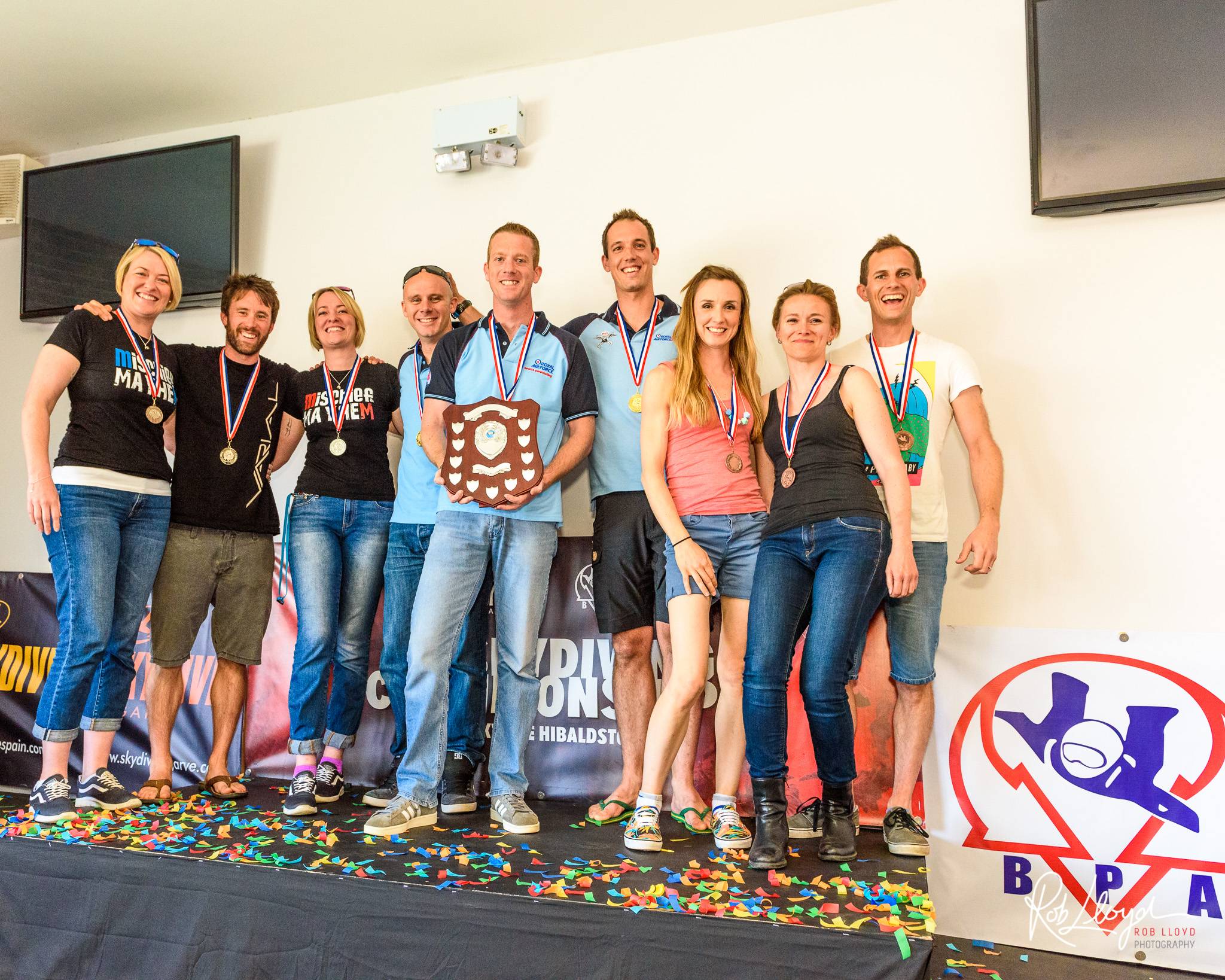 The Evils (Yvonne Gassner, Claire Hill, performers with Max Hill on Camera) came in on a solid 3 place. I have watched this team learning to fly together in the tunnel and had the priviledge of training alongside them in the sky – for all of the 2 jumps that the weather gods allowed! I look forward to seeing great stuff from them in the future. 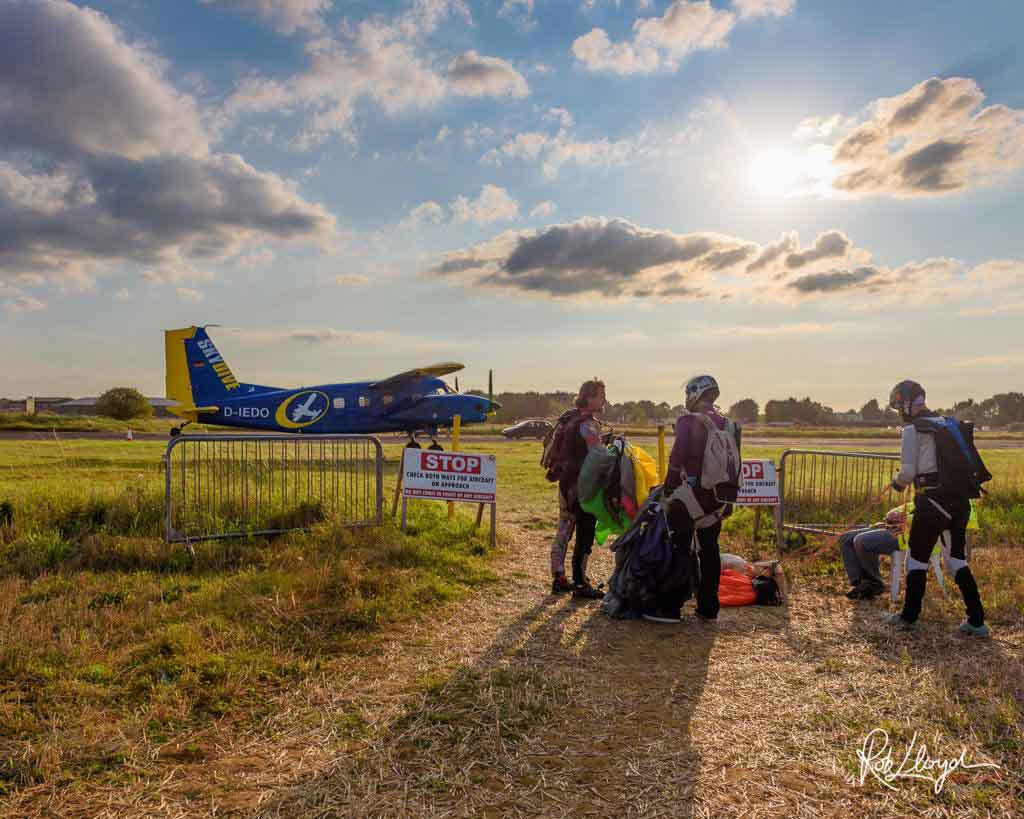 It was awesome to see all freefly events completed in a single day, Saturday 26 August, nice one ‘da management’ of Skydive Hibaldstow – a feat of logistics, especially considering some competitors were entering more than one event.

I hope that the teams that have been selected for the World Meet next year, look outside of our tiny island and look to run some their ideas for routines by judges/ex-competitors on the world stage, so we can bring back some bling in artistic in 2018, good luck to all!

Scores can be found HERE on the InTime scoring system