Saturday 26 August, the first day of the 8-way Nationals dawned bright and sunny, so everyone was in good spirits from ‘the off’. It was a busy day for Skydive Hibaldstow, running the Artistics and Speed nationals alongside the 8-way. Amazingly, they completed four events (Freefly, Freestyle, Speed and Rookie 8-way in one day, and most of senior 8-way, leaving only to make 2 jumps in the morning. It was a good party on Saturday night!

There were 6 teams in senior, and a very high standard throughout. There was never any doubt as to who was going to win – Microclim8, reigning champions and the British team for about a decade. They stamped their mark of supremacy from the off, with an 18-point dive (bust to a 17) with the next nearest team (Project Ride the Dragon) on 12, which was an excellent score for that round (C, 3, K, A). This shows Mircoclim8’s class for this is virtually a random round so the difference came not from more-practised block moves but from superior skydiving together as a team. There was still some considerable suspense in the meet though, with Micoclim8 chasing their own British Record average of 14, set at the World Championships 2016, Skydive Chicago. At the halfway point, their average was 14.6 and we were all gripped… 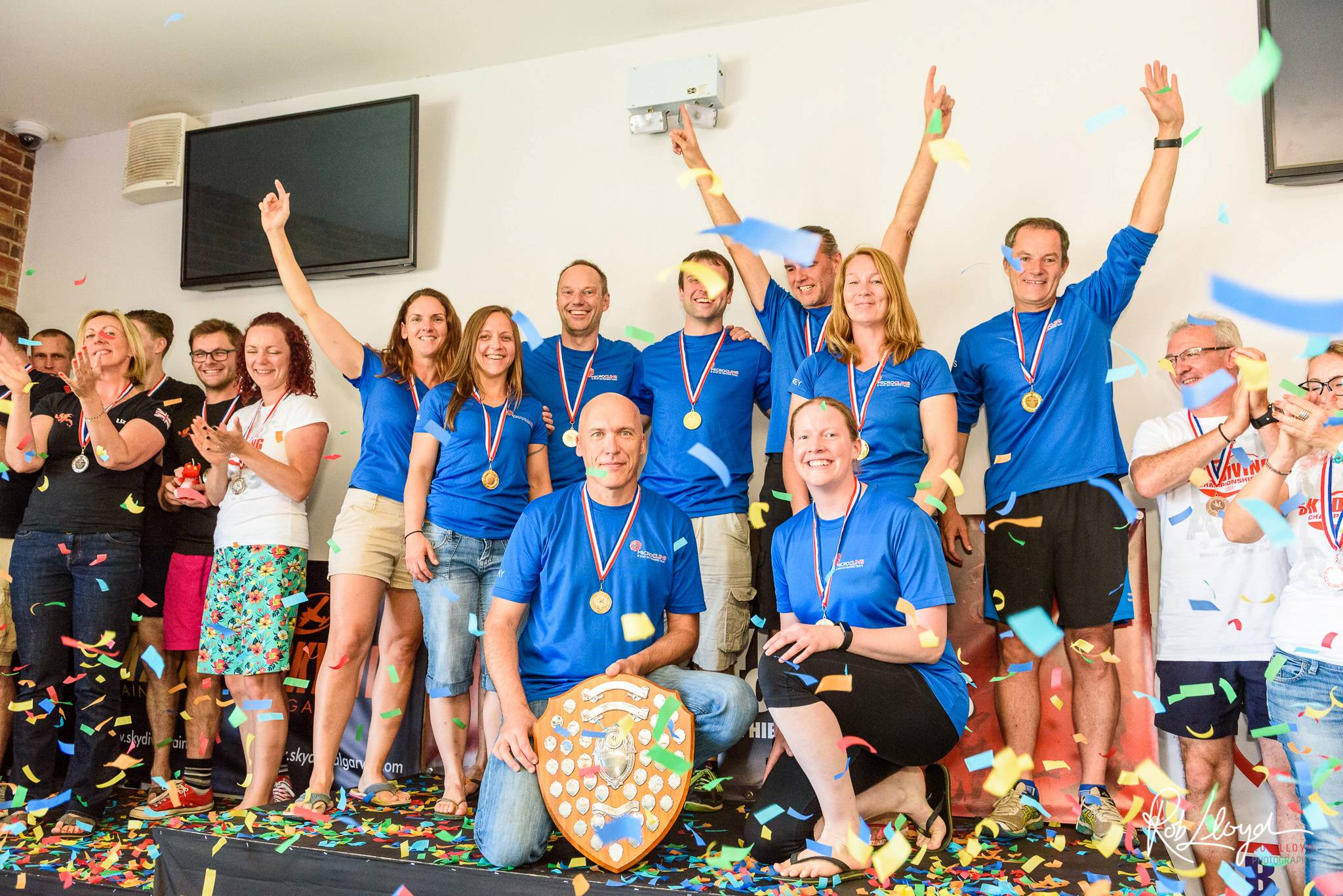 A succession of 13s with the next point just out of time had the crowd groaning. The excitement continued to the very last round, which they began with a 14 point average – and ended the same way, with a 15 bust to a 14. A collective groan ran round the room before the cheers and claps of congratulations on a well-deserved gold.

I’m sure the guys will crack out a new record soon, this wasn’t a fast draw. They become once again our official UK team at the next World Championships (Australia, 2018). Their skydives were looking amazing! This team has had, in the least few years like many teams, to take a step backwards to progress. The ‘old foxes’ have taken in up and coming talent, subjected themselves to the scrutiny of an outside coach and re-programmed block moves. This year the team is reaping the benefit of rebuilding the team; their jumps were so on point! I’m sure they have more performance to come, here’s to watching you next year! 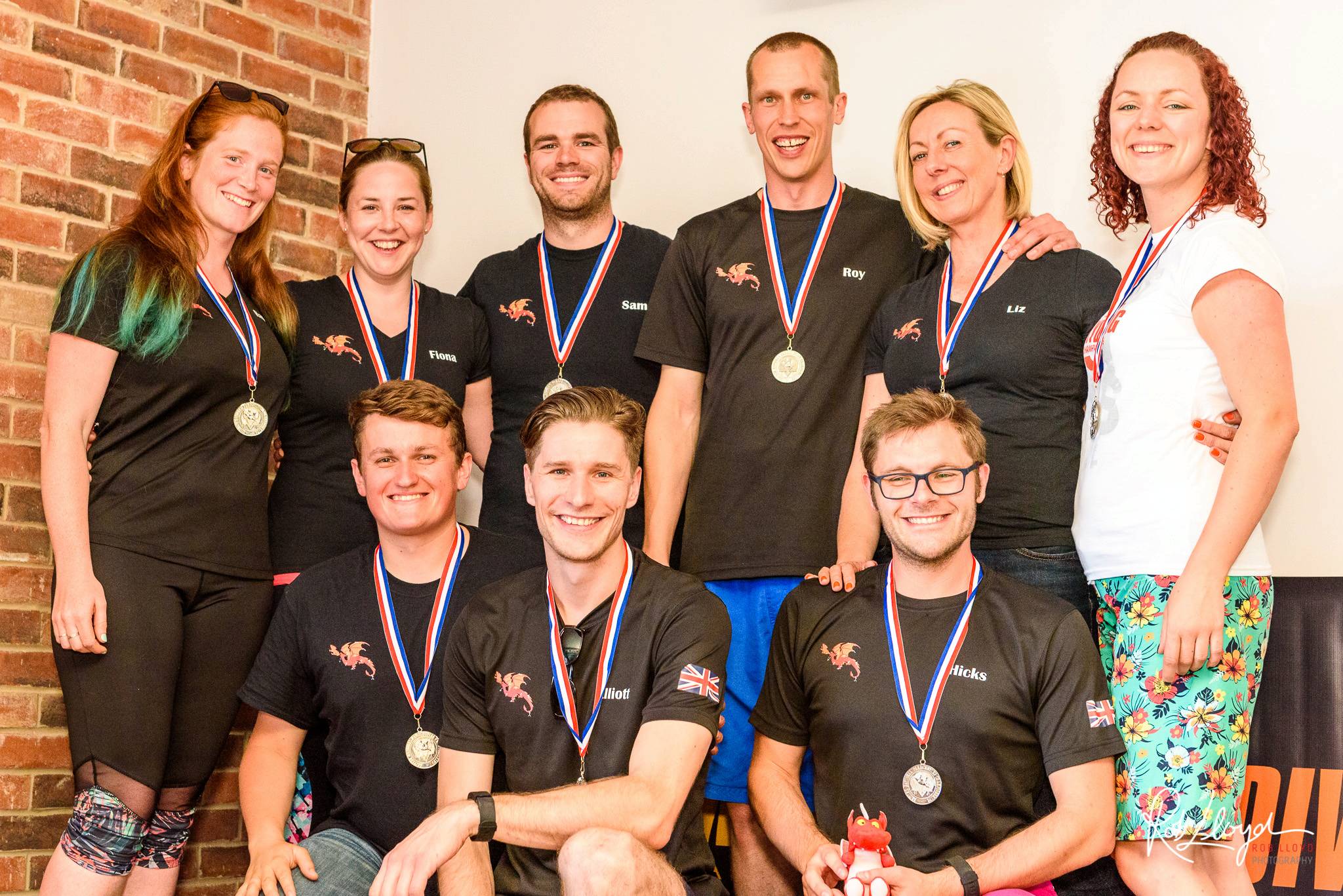 What of the other medals? Traditionally Stumpy, (Ian Matthews, ex Microclim8, Connextion and VNE) throws a team together with more ex Microclim8 members and makes the team sweat for their gold. But he was on holiday this year so the other medals were wide open. Project Ride the Dragon are a team of very talented jumpers put together last year by Potter, who’s since left the team and competed against them.

Coached by Marco Arrigo and Johan Van Eeckhout (who came to Nationals), they delivered spectacular skydives for their relative 8-way inexperience. Ride the Dragon romped away with silver and a 9.3 average, looking comfortable from the beginning. They delivered despite an unwell teammate, a climb back into the plane, a broken helmet and a bunch of bruises, well done guys! Professionals! I’m sure that double figure average is yours for the taking next year! 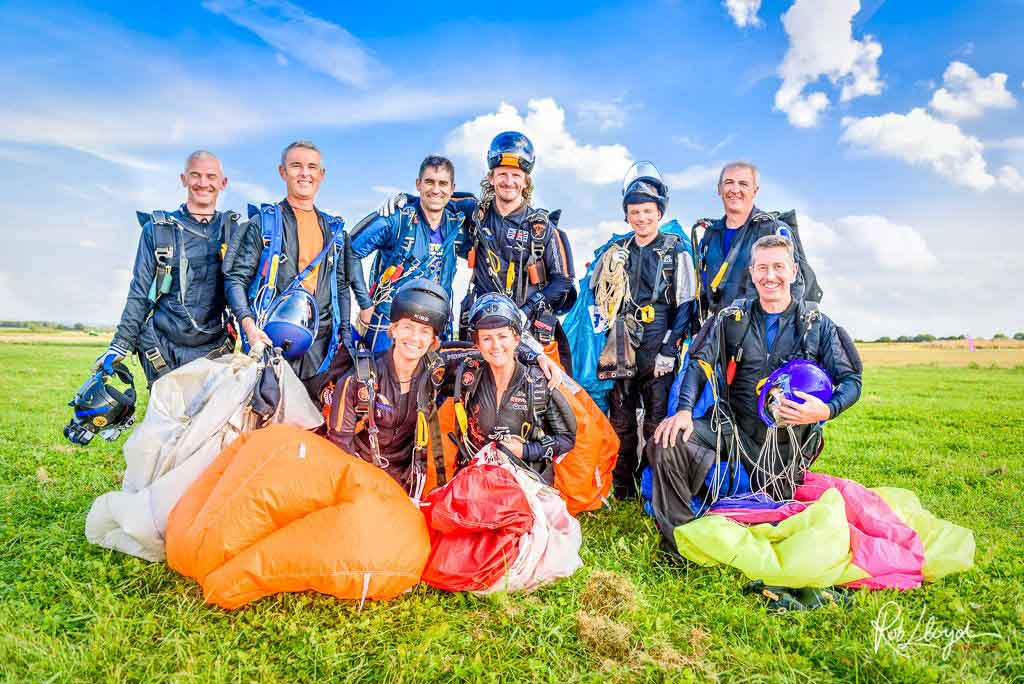 The bronze medal was the only one contested, the fight between the scratch team ‘Sky Wars – the Farce Awakens’, and ‘Awkward Turtles’, who compete (untrained) every year, usually with a few changes in line-up. In the end the greater 8-way experience of Sky Wars members won them a well-deserved silver and 7.7 average, 6 points ahead of Turtles. 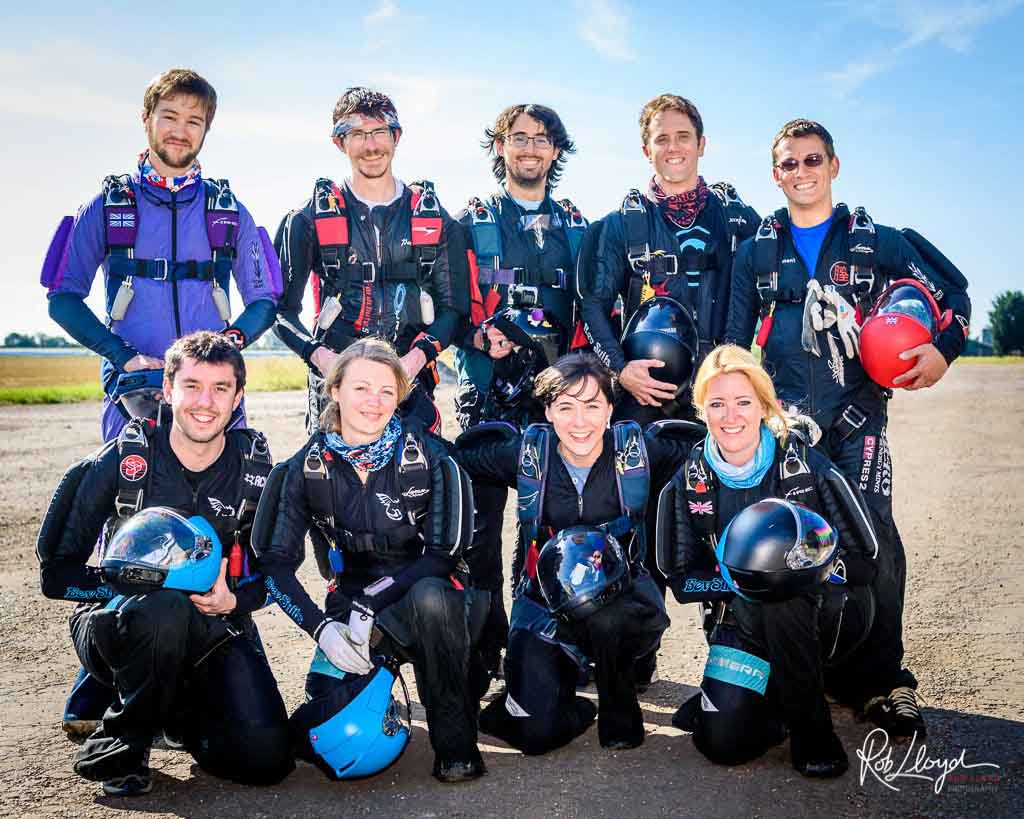 The meet once again showed that 8-way is all about the exit. Late-way, who came fourth, funneled their launch every time until round 10 but –Oh! – what a cheer that exit had, both in-air and on the ground. L8-way gave the judges their biggest laugh of the meet when their alternate (rear float) fell off the plane, resulting in a 38-second first point! 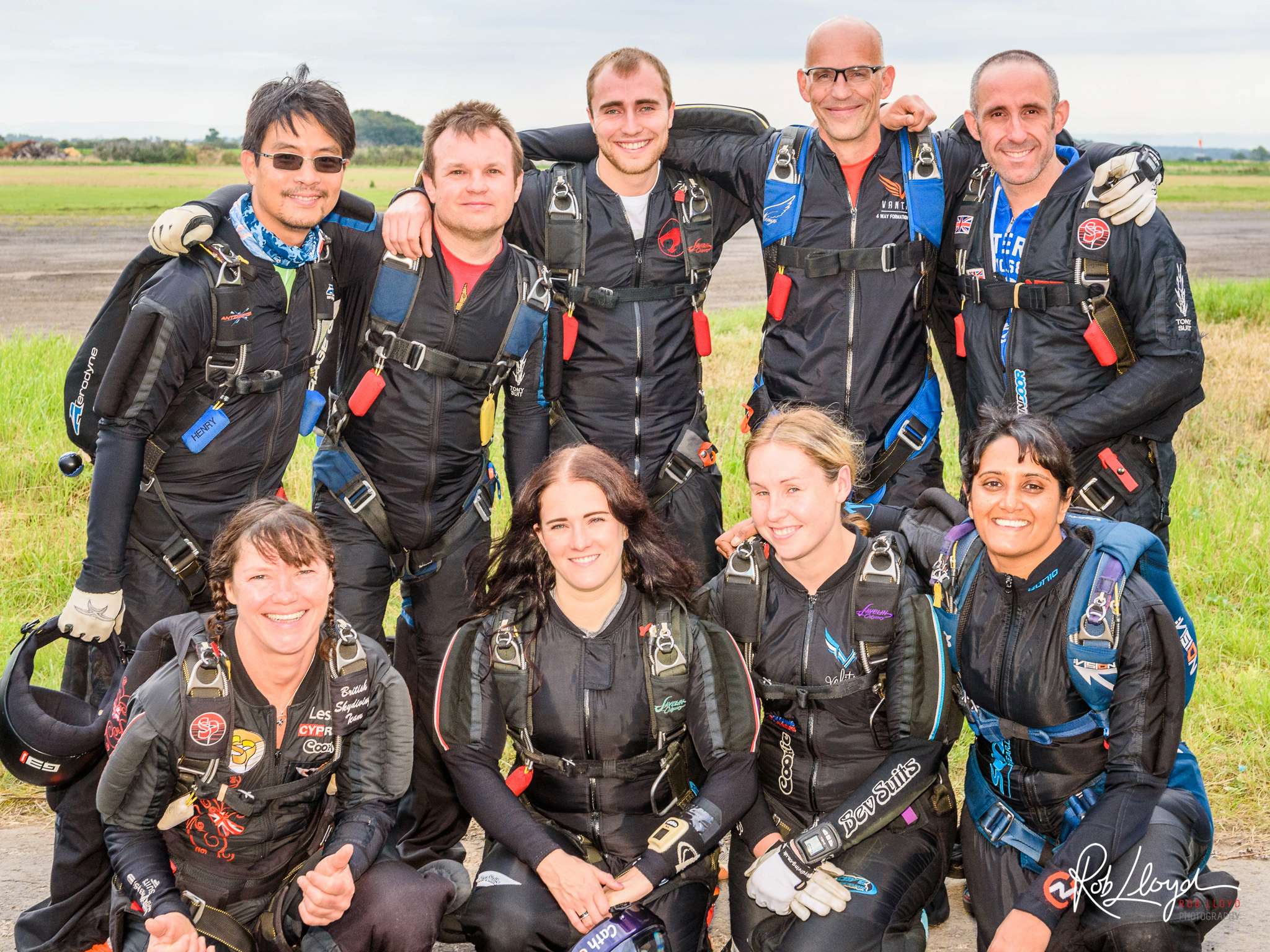 Bringing up the rear were the well-named Coalition of Confused Kaos (nice acronym), who scored every round and had some moments of brilliance. 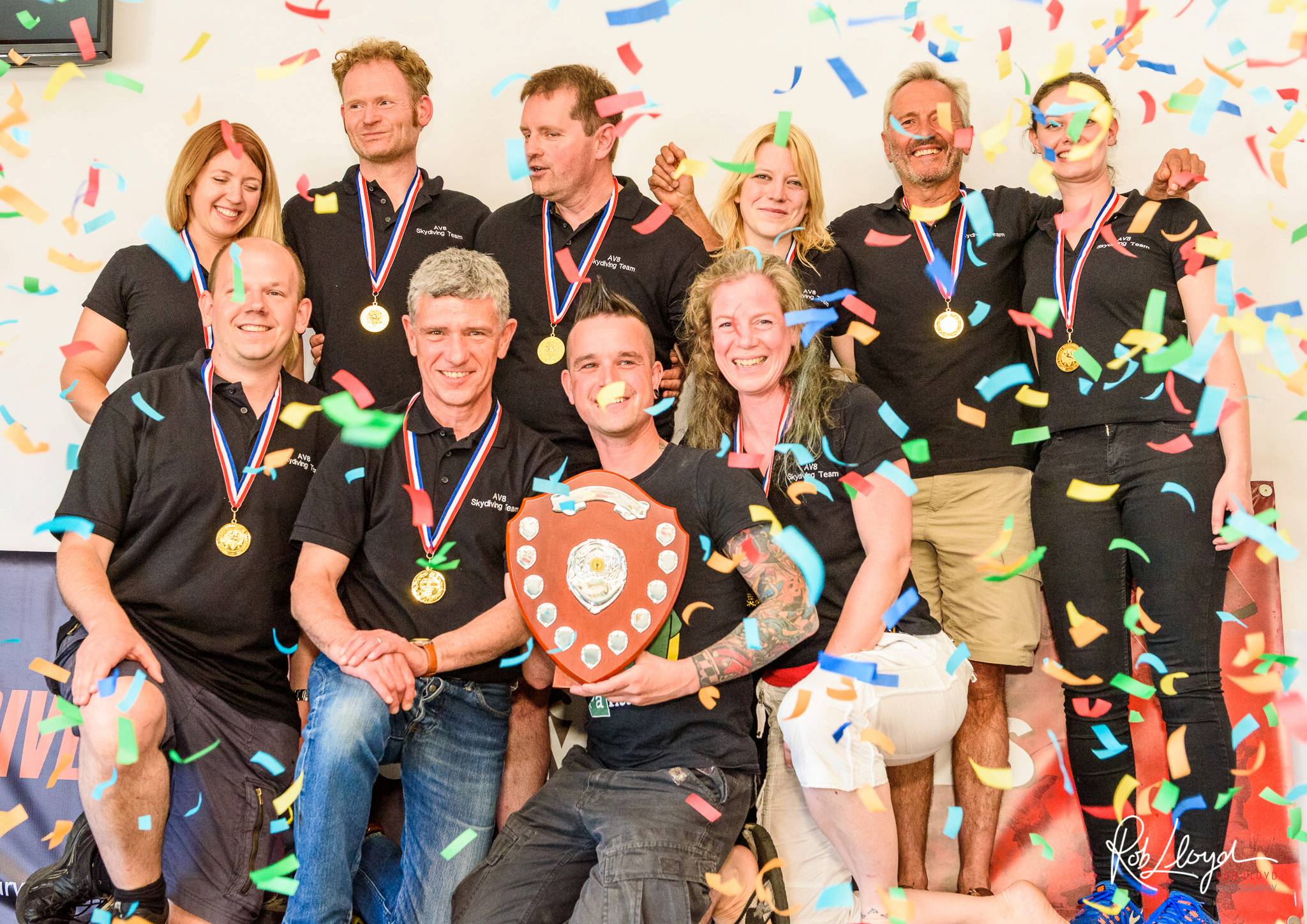 In Rookie 8-way, AV8 took gold against fierce opposition (themselves), it was good to see an entrant in this event, showing it’s open to all, come on down next year everyone! If you’ve never done 8-way Nationals, it’s really fun to give it a go! Don’t worry if you don’t have a clue what you’re doing, the lovely members of Microclim8 are always happy to coach, do your puzzling and look at your exit. Thanks guys, help much appreciated, same time next year and good luck with the training.

Scores can be found HERE on the InTime scoring system. 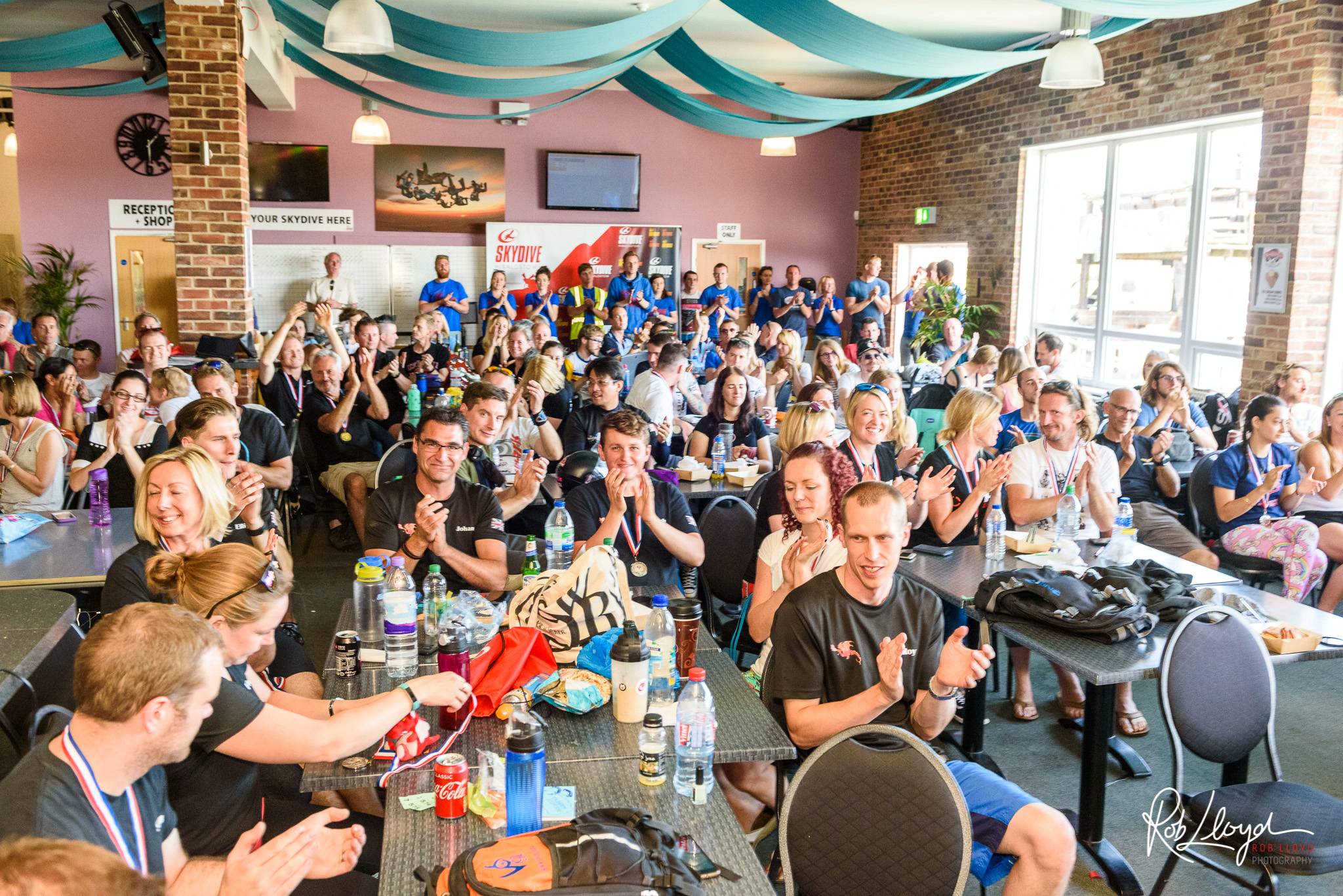