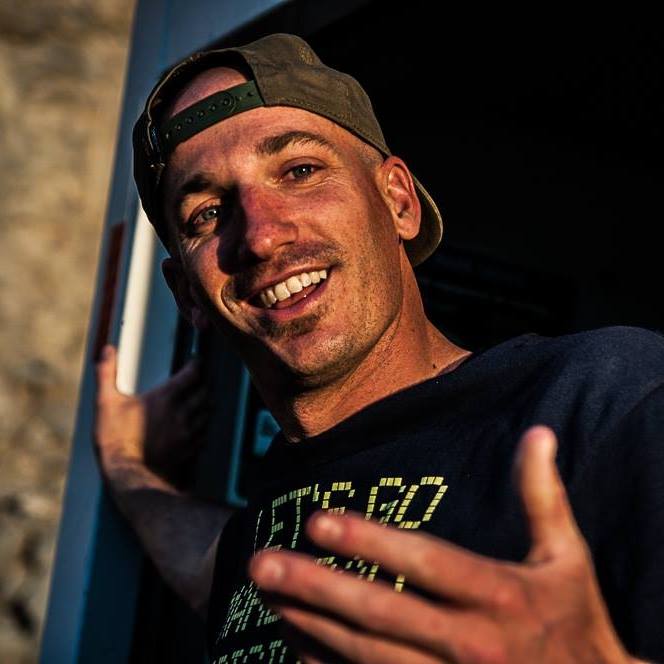 Matt Lajeunesse has over 1200 BASE jumps and 7,900 skydives. He lives in Moab, jumps low cliffs predominantly and is known for excelling in technical rigging of low jumps. Matt spends a ton of time working to help BASE with National Parks, raising money for Moab Search and Rescue, organizing events for the BASE community, and more. He’s a saint in BASE. Matt doesn’t promote himself, but he’s a force and a thinker so we tracked him down to ask him some philosophical questions.

If you want to know what Matt’s about, watch his award-winnning video below…

‘Into the Now’, a Matt Laj video that won first place, Bridge Day 2016

BASE for your HEART… Not for your NAME… Not for the FAME… It’s about the PLACES, PEOPLE AND FEELINGS

Who are you anyway, I’ve never even heard of you..?

I am Matt LaJ. Over the years I have become known for good laughs, a passion for BASE, and gone by the names; “Packer” and “the other Matt.”

BASE jumping is amazing. I really do not have words for it. What I love however is all of the things that come with the BASE jumping culture. I love to travel and be outdoors more than anything. BASE jumping embodies each of those passions. BASE jumping has shown me places I could never describe. I love the character that BASE jumping introduces me to. It takes a unique person to want to BASE jump. The people I have met have inspired me, made me laugh, made me stronger, and taught me who I did not want to be.

How many years in the sport, how many jumps ?

Why aren’t you a wingsuit BASE YouTube star yet, after so many highly active years?

Is that the goal?!

Yes, I have put 2 or 3 videos on the internet, but I waited 7 years to release anything. Yes, it is fun to see amazing BASE jump videos, and even more fun to participate, but the videos and attention are not the goal. They are one of the by-products. Secondly, I have a lot more videos that I could release, but for what?

Also noteworthy, I have never once had a “dream of flying.” Almost every wingsuit base jumper and skydiver claims to have had dreams of flying. It disappoints the heck out of me that I miss out on that too, but maybe you need to dream of flying before really flying.

maybe you need to dream of flying before really flying

Have you seen BASE change in the past few years? Is it different from when you started?

Yes, BASE has changed. Everything changes. The technology has advanced, the culture has changed in some ways, and what is possible has changed. When people talk about change it often triggers the negative changes, but I would be blind or a liar, if I thought I was not a part of it.

Do you feel like the growth of the sport has eroded the sense of community?

What problems do you see with this evolution?

Aside from missing out on “the bigger picture” of what BASE jumping is all about, being less of a community likely makes the future of BASE jumping weakened. If we are not working together to protect areas that allow BASE jumping, we are all going to lose.

If we are not working together to protect areas that allow BASE jumping, we are all going to lose

What role does social media play?

Social media has a role in almost everything. Yes, there are many examples of social media being bad for BASE jumping, but there are also examples of it being a positive spin on the direction the community goes. Social media simply is a part of the age we live in. We cannot blame social media, we should blame people negatively using social media.

How do you think it can change for the better?

I think BASE jumpers can set a standard of what they want, like and desire. I think people can focus more on events than getting 1 minute of internet attention. I think we can focus on education and community. Social media can be used in a positive way. There are many changes that can continue to occur. I do see positive things happening in the community.

What would you tell a skydiver wanting to learn to BASE, now?

Take your time. It is very rare that people rush through skydiving into BASE jumping and do not get hurt. The more time that you focus on skydiving, the safer you are. Oh, and the training for BASE jumping – skydiving – happens to be a ton of fun!

What were you thinking when you jumped into the cloud in your famous video, Leap of Faith? (above)

I try to turn off the majority of my thoughts during BASE jumps. I’m sure I was pondering whether or not I would get caught, or if there was something I had overlooked, but while on the exit point it’s better to focus on actions rather than thoughts. I spent months preparing myself for that jump, when the opportunity presented itself I could not resist.

Is BASE illegal in the USA?

No. BASE jumping is illegal in a few places in the USA, but not the country as a whole.

So, besides back country cliffs, there is just one bridge or what?

BASE jumping is very different in America than in Europe. We jump off just about anything that gets us over 100 feet off of the ground. Billboards, oil rigs, smokestacks, buildings, tons of antennae, trees, and sooooo much more. I am constantly amazed at what we are finding to jump from.

Do you ever think about trying to get more access to more legal objects?

Constantly. I have grown to really enjoy this tedious process. I hope more American jumpers get involved in pursuing legal objects. I think we have a tremendous amount of potential legal events and objects that are untapped. Jumpers need to be willing to go through the slow-going process by properly representing themselves and BASE.

What did you do before you were a BASE jumper?

I was a fifth grade school teacher before becoming a full-time skydiver and BASE jumper. 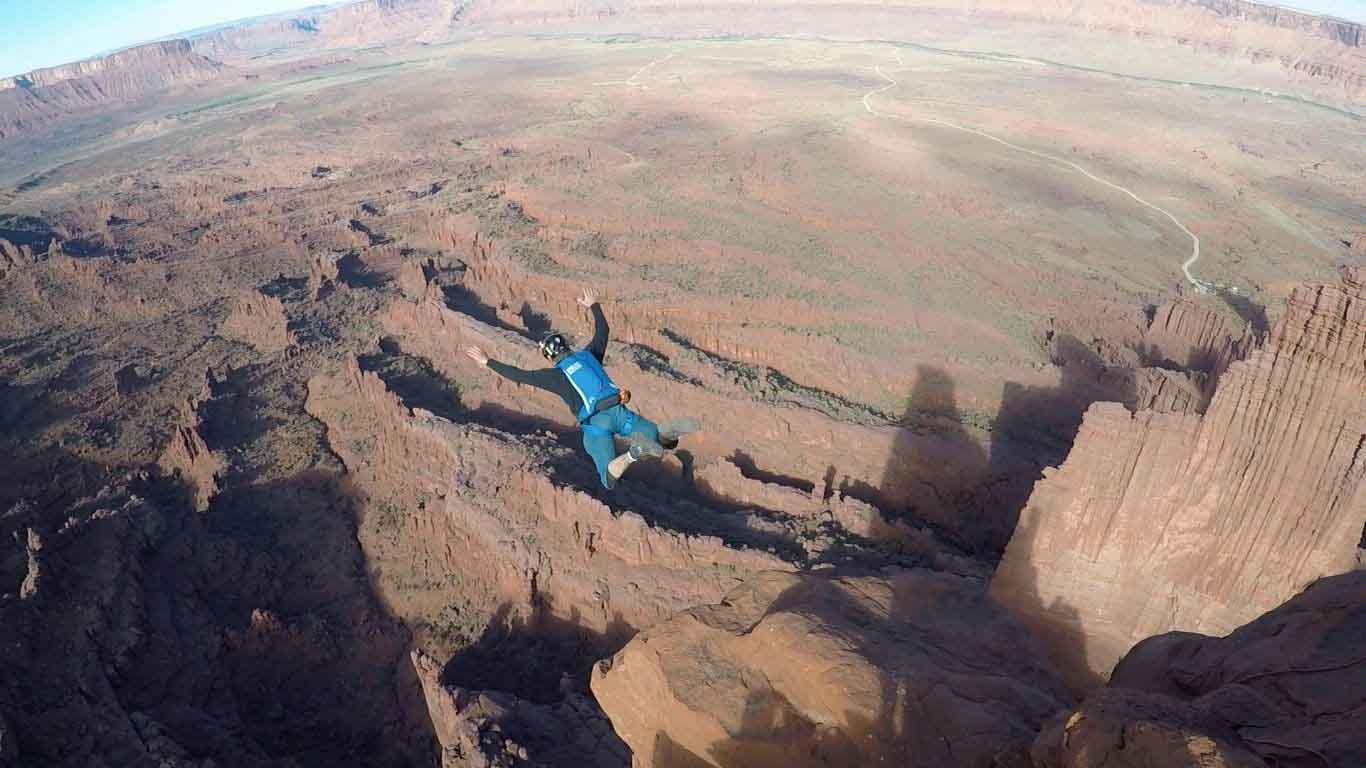 What do you do in the sport?

I have been traveling the world skydiving and BASE jumping full-time since 2012. I have worked on various BASE projects and events, as well as dropzones, around the world during that time. I currently work for Squirrel and Skydive Moab, and love the opportunity each of those businesses has given me.

Do you feel like your background and education helps you in your current role?

Speaking of events, the rumor is you’ve been a big part of the Moab Turkey Boogie in years past, that is maybe the biggest BASE jumping event in the world. What have you done and what are your goals for it?

I have been going to Turkey Boogie since 2008. It is far and away my favorite BASE jumping boogie. Over the years it went from a fairly small, under-the radar event to one of the biggest. I have helped coordinate the event fundraiser. Over the past 4 years we have raised $38,000 for the the Grand County Search and Rescue team. The event has also become an opportunity for BASE jumpers to work along with the governing bodies of Moab. This year we are working with Search and Rescue, BLM, NPS, and a family in need.

FREE OUR PARKS! Poking fun at the US National Park Service’s stance on BASE jumping

After so many decades of failed effort, why are you still working on the US National Park Service issue?

Without effort, we are stagnant. The best thing that can happen is we get a permit for another BASE jumping event. BASE jumping has given me opportunities I never expected. I genuinely never dreamed this big. I owe it to the BASE community to give back what I have been given. One of my current dreams is to stand on exit in an American National Park during a permitted BASE event that I helped orchestrate.