Two parachutes collided on short final at Skydive Arizona on December 30th, 2016. This event is very instructive and would make a good subject for Safety Day.

We have two videos that make clear what happened. One is from the perspective of a canopy in the collision:

The other is from an outside party whose camera shows the seconds leading up to it as well as the collision itself:

It might be a good lesson to play them both a couple of times, then go through them a frame at a time rather than jumping to the conclusion that “low person has the right of way” was violated by the overtaking canopy.

We’re all taught that in canopy traffic the low person has the right-of-way. This makes sense to some extent because we can’t fly safely if we are constantly looking up and behind us, any more than we can drive safely constantly looking in the mirror or over our shoulder. It is my responsibility to avoid colliding with cars in front of me, while those behind should be leaving enough space to avoid me if I need to suddenly brake or swerve.

It is understood, however, that you don’t make sudden lane changes without looking or signaling your intentions and for no good reason. For years I have preached that every turn under canopy is a potential collision. Unnecessary turns should be eliminated completely, and necessary ones should be executed very carefully because, unless you left the plane alone, you cannot assume you will see all the traffic. In this collision there was plenty of it, with other parachutes to both sides and behind.

The two canopies that collided were both in a left-hand pattern. It is evident early on that the top canopy has a slightly higher descent rate and speed than the bottom one. (The top canopy is a conventional 9-cell, while the bottom canopy is a 7-cell, and based on the video the top canopy was at a higher wing loading.) Note that there are other parachutes approaching from the south, planning to execute a right-hand pattern. It is emphasized in the briefing and safety materials that under no circumstances should anyone cross the center line of the landing area. Left hand canopies land on the left, right on the right.

Many people apparently do not pay full attention to the briefing video, or their previous training and practices override the information we give them. When the part about traffic patterns comes on some people are probably processing it as “I already know how to land my parachute, so I’m not going to pay attention to this.” Training also comes into play. We have all heard that “practice makes perfect.” The consequence is that people who practice bad flying habits such as S turns or flying as though there is no one overtaking them from behind get very good at bad flying, to the point where they often don’t even realize they are doing it.

In both videos we clearly see the lower canopy cross the center line all the way to the south edge of the landing area and then make about a 70 degree turn back to the left, perhaps out of concern for canopies approaching from the south or perhaps to avoid overshooting the grass. As you watch the videos frame by frame, the top canopy does not have a lot of options as the bottom canopy turns directly into his path. Go right? Go left? How can he possibly know what the lower canopy will do next?

About the only way out might have been for the top canopy to flare in the hope of floating over the lower canopy. This is something nobody practices or does on landing so even good instincts wouldn’t put it in play. Of course, had the lower canopy turned back onto a straight final sooner, this would have been very helpful, too. On the other hand, if the top canopy had tried to go around to the right, that might have made things worse.

It appears in the third party video that just before the collision the top canopy makes a split-second decision to turn right in the hope of passing behind the lower one, but there simply wasn’t time or space. About five years ago I watched a man die in very similar circumstances. He made a completely unnecessary S turn in heavy traffic and struck the legs and body of a jumper immediately above and behind. His canopy collapsed and he spun into the ground from about fifty feet up.

Luckily this time, although the lower canopy collapsed, it re-inflated just before impact, at least enough that the injuries were not too serious. Another factor was that the foot-mounted GoPro of the top person broke loose in the collision. Again… luck.

The pilot of the low canopy probably never saw the person she turned into because he was above, behind, and to her left while she was almost certainly focused on the landing area (now to her right) rather than the traffic. Even if she was looking around, you can never assume you see all the traffic, partly because the traffic is constantly changing position and partly because skydivers have a much bigger blind spot than they think. We only have two effective tools to avoid collisions in the pattern: fly defensively by minimizing turns and reducing our pattern to absolute predictability, and concentrate not just on our landing, but everyone else’s too: leave room for the others.

Let’s not forget that a parachute/skydiver system has both mass and velocity, and therefore momentum. When a collision threatens, you need several seconds to recognize the problem, devise a solution, and put it into effect. In traffic we don’t always have that, so the only way to avoid a collision effectively is to prevent it. That means staying in your lane so faster canopies can pass safely. “Low person has the right of way” is not the same as “low person gets to hog the entire final approach area.” 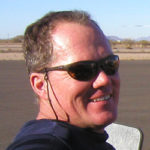