Rook Nelson is widely known as being the mastermind behind the Vertical Elite World Records, a World Champion, Owner of Skydive Chicago and host of the world-renowned boogie, Summerfest. Skydiving runs thick in his bloodline; it is a part of him and always will be. 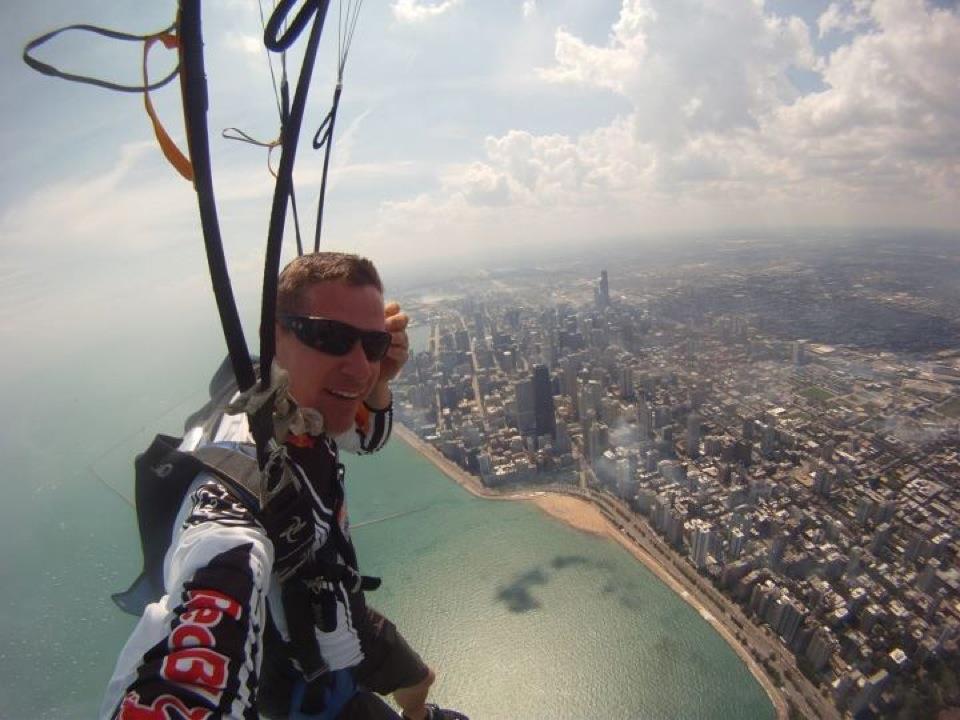 Having made his first tandem skydive with his father at the age of four, he followed suit in the family business of skydiving and intends to pass it on to future generations. While his extensive resume is accomplished and inspirational, it is his humble nature and drive to succeed which are his real traits to aspire to. He was kind enough to make time in his busy schedule to let me ask him some questions…

Aside from your killer competitive nature, what do you love about Organizing the Vertical World Record?

For me, it’s the challenge of putting it all together and making it work. I love when people say it’s impossible because it motivates me to try and figure out how to do it. I come from a family of doing World Records and I feel like it’s in our blood, but ultimately, I really like uniting as a team and achieving that goal as a whole.

If you think about Nationals; you show up to Nationals and you have your little team, and you’re high-fiving all the other teams, but, well, it’s very fake. You don’t really want them to do well; you want to win! [laughter] But, when you compete on a record, we are all on one team!

The drive and the desire it takes, and what people will do to make that Record work! That’s motivating! And I can dig that! I want everyone to get down, support each other, and fight for one team. Versus giving a fake high-five, because I want you to lose! [He laughs and I get the chills from the passion and enthusiasm he conveys] 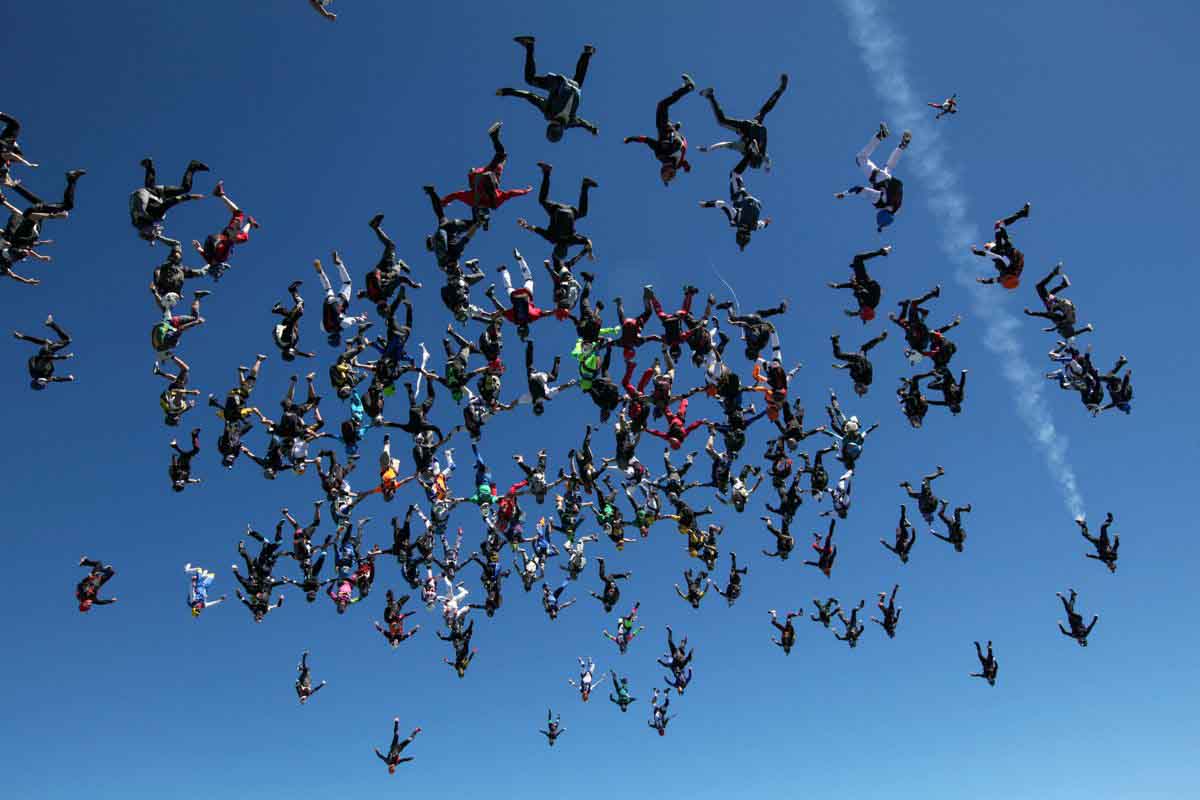 Are you excited to see some new faces dock on this record?

Absolutely, we’ve seen a ton of motivation for this record. When I did the last one, I felt like I was kind of forcing it along and pushing the ball up hill, and this time it’s different.

I mean, the Fly4Life guys are even doing Vertical camps, and that’s not something you see them do. That’s impressive, and we’re seeing it all over with all the State Records­— Canada just did their Record, and the Cali Record is coming up— J. Russ has a warm up in Florida coming up soon. They have 80 people signed up for it and it’s not even a tryout.

Ultimately, it’s the adventure that’s the fun part, right? It’s these camps, these tryouts, and the people that we meet. That’s the real reason we do Records.

There’s a big swing for Head Down World Records right now, so I’m excited to meet a lot of new faces. It’s really cool to see a lot of motivated flyers come out, who want to join the Vertical Elite.

Although, people at a Record— they never talk to the organizers until the Record is done because they don’t want to draw attention to themselves. [laughter] It’s the classic thing at a record— Do your job, be seen, but don’t be seen, right? Because if you’re seen, you’re probably not doing your job, and then you might get cut.

But, once we get the record, I meet a whole lot of people. People come up to me saying, ‘Hey, I wanted to introduce myself, but you probably know why I didn’t.’ And I’m like, ‘Yeah. Well, thanks for coming out.’ [laughter] 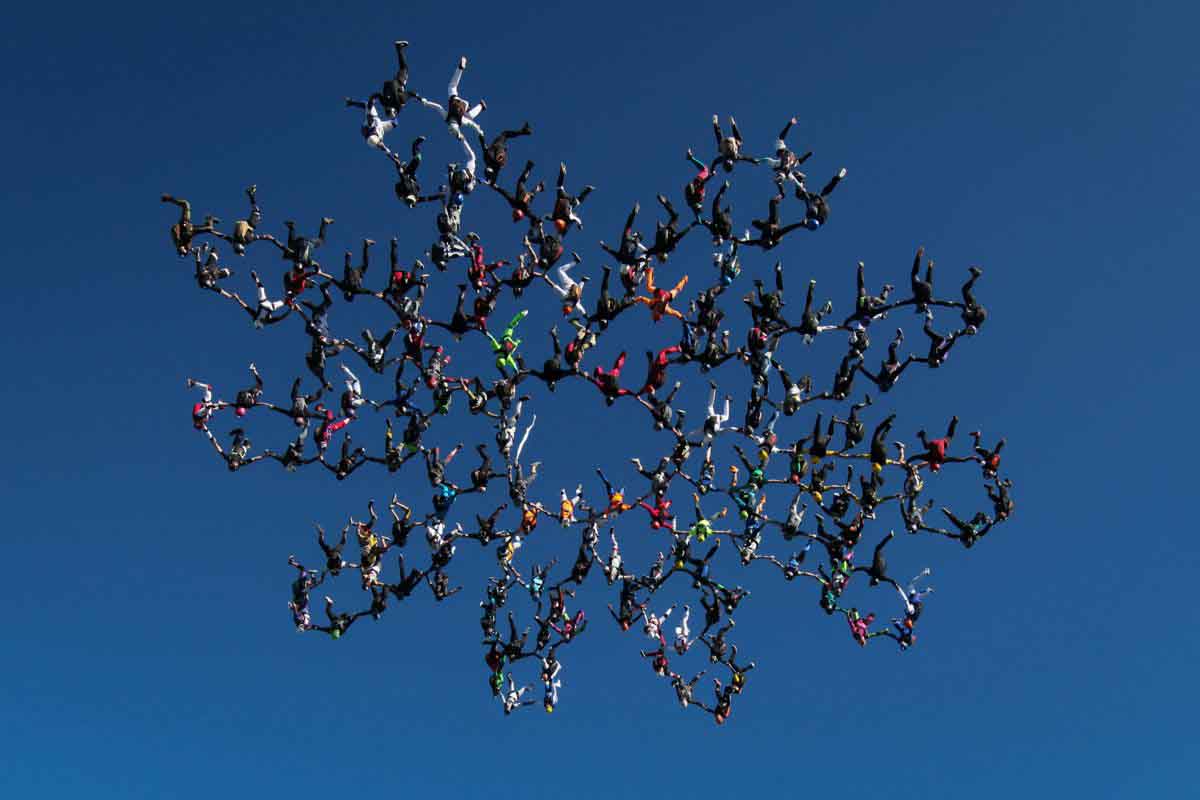 For those attempting to make the cut for the 2018 Vertical World Record, what does it take to get to the Elite level?

Let’s say we are trying to do something that isn’t skydiving. Imagine you were one of four people in a room that trusted each other, undoubtedly. You could accomplish anything with those other three people. You know everybody else is going to pull their weight. They’re going to do their job. And they’re going to be successful. You trust them, and if you just pull your weight, do your job, and be successful, you can do great things together.

If you break down what a World Record is— It’s one point, right? The thing about a Record though, is when you jump out, there’s a lot of hesitation. Ultimately, what you lack, is trust in everybody else. At first, you don’t know if you’re going to do your job. You don’t know if the guy next to you is going to do his job. Then, with every attempt, and more repetition at it, suddenly, you’re like, ‘wait a second, they are doing their job. Now I need to do mine.’

If we were to walk up to jump number one of a Record, with 100% trust, in every single person. I guarantee you, we would get it on the first jump. But, we have to build trust, and develop new relationships. We have to communicate. We have to high-five. We have to make sure we’re not going to kill each other. And then, we’re going to be able to perform.

If we were to walk up to jump number one of a Record, with 100% trust, in every single person. I guarantee you, we would get it on the first jump

So, when you show up to a Record Camp, don’t trust everybody right away, because that’s a good way to get hurt. But, understand the process of what’s going to happen throughout your Camp.

Just because you don’t get an invite on the first try-out, it doesn’t mean don’t go to another one. Learn from it. Take everything you can gather from it. Use what you learn, and know what to attack on your next tryout. You’re going to learn and develop that trust along the entire path.

Don’t be down on yourself; because everybody has a bad day. For example, I’ve cut my sister from a World Record. I’ve cut a lot of the Organizers of events that people pay a lot of money to go to— off of World Records. Don’t be discouraged, if this isn’t your year. I guarantee, in three years, I’ll do another one.

Ultimately, it’s the adventure that’s the fun part, right? It’s these camps, these tryouts, and the people that we meet. That’s the real reason we do Records.

I’ve cut my sister from a World Record 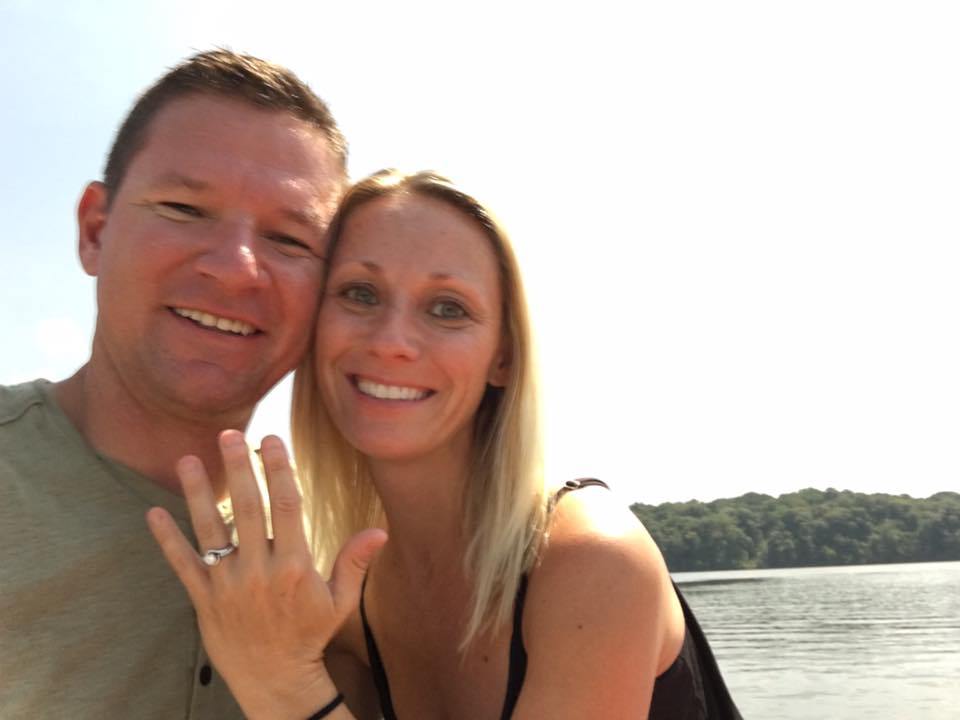 Congratulations on your recent engagement to longtime girlfriend, Heidi. Will you be having a skydiving-related wedding or keeping the ceremonies off DZ?

The wedding probably won’t be skydiving related, but we’ll certainly have something for everybody to be a part of. But first, we’re going to have our little baby boy. 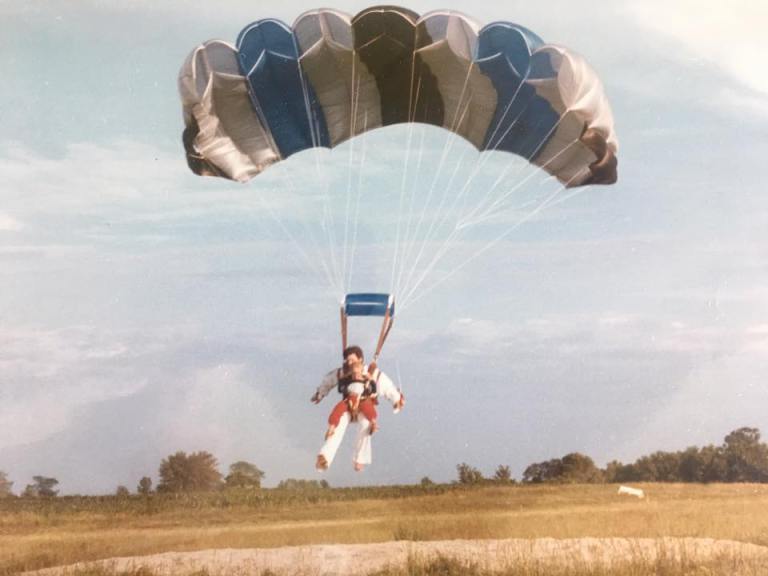 March 8th. Everybody’s going to leave and when they come back in the Spring we’ll have a kid.

Do you think that’s going to change your participation in the sport?

I don’t think it will. Heidi knows how important skydiving is to me and when I don’t jump, I annoy her. [Laughter] She is very encouraging and you know the saying, ‘behind every man is a better woman’, that’s true with Heidi. She often steers me in good directions for business decisions, and she is very supportive of what we do.

Your name, Rook, is unusual and unforgettable. Is there a story behind it?

It’s actually a nickname. Not too many people know that. My real name is Matthew, but the bank and Heidi, when she’s mad, are just about the only ones that call me that. [Laughter] I got the nickname when I was a little kid. Manifest always runs on a PA system and there were a bunch of Matts that worked at the dropzone. They started calling me Rook over the PA and it just stuck. I’ve been going by it ever since.

Are you going to pass on a unique name to your son too?

Yeah, his name is going to be Rocket!

That’s awesome, Rocket, because he’s going to be fast as …, right? [Laughter]

Yeah, that’s right, that’s right. [a proud look overcomes him] I can just see him in school. They’re going to be doing roll call— Is Michael here? Is Tom here? Is ROCKET here? [Stoked Laughter]

In 5 words or less, describe your relationship with skydiving 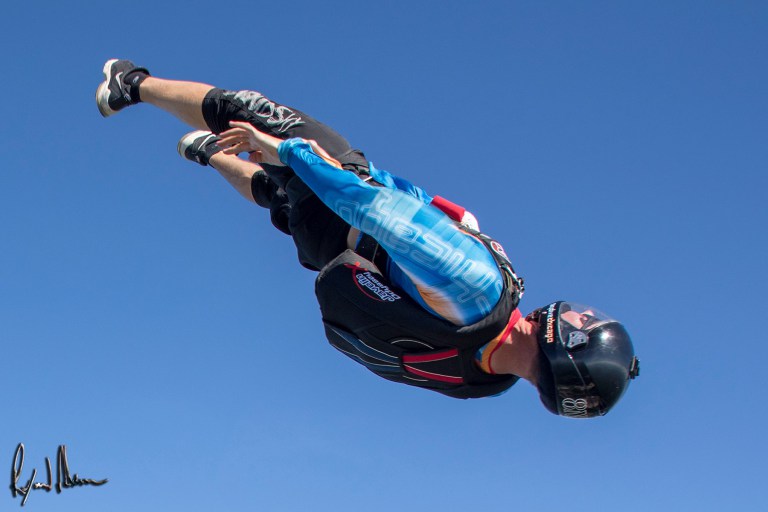 Why have you decided to fly with Sun Path for so long?

Pat [Thomas, Owner of Sun Path Products, Inc.] gave me my first rig back in 1994. There was a short hiatus when I jumped a Voodoo, but I went back to flying the Javelin Odyssey after a couple of years. I have been jumping them ever since. For me, sponsorship is not necessarily just about the equipment; it’s also about the relationship you have with the company. It has been an excellent relationship from the beginning. It started out with Pat and the way she’s always treated us. Even before I got a team together, she was looking after us. When my first team started competing, she upped the support because she believed in us. It allowed us to compete. As the company grew, she continued to keep her word by supporting us. Her communication as a sponsor has always been amazing. The Javelin Odyssey was already awesome but she has always listened to our feedback as athletes and made changes to the rig that set the bar even higher.

What do you love about your Javelin as a Freefly rig?

I’ve never had any issues with them as far as weird malfunctions or flaps coming open with them and I am a big fan of ‘if it’s not broke, don’t fix it.’ It’s the most comfortable and secure Freefly rig out there and the personal attention we’ve received to make them fit and fly exactly how we want them to; well, that really makes Sun Path stand out above its competitors.

Achieving your goals is way more rewarding than anything else 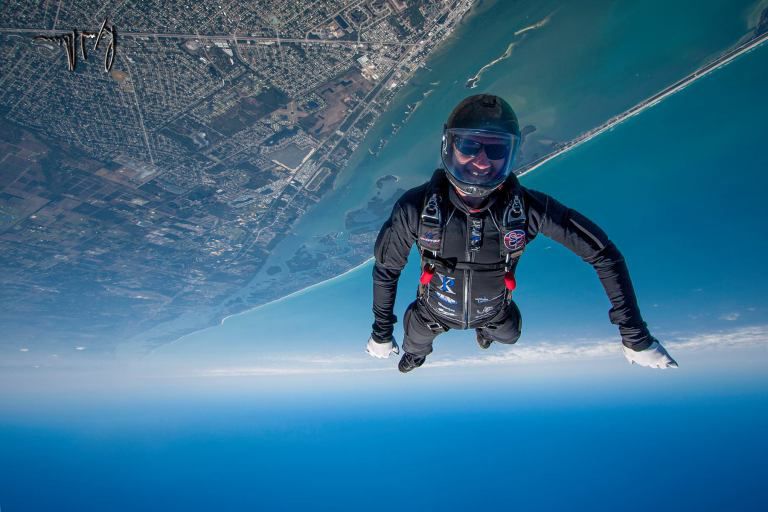 As one of the respected legends in the sport, is there anything you would want to improve on your Javelin or anything you think Sun Path can do better as a company?

Um, well, I thought you had to be dead to be a legend! [laughing] I’m not a legend quite yet!

You know [still laughing] you guys do great. Pat and Sun Path’s support goes beyond the individual sponsorship of me as a jumper. She supports the events we do too, specifically the World Meet and I really can’t ask for a better relationship than that. The rig is fantastic and she is great to work with. I’m still trying to get my [SDC Core] teammates to switch over. So, we’ll see how that lines up.

I thought you had to be dead to be a legend!

Thanks for taking the time to talk with me Rook. Any final thoughts you’d like to share?

Yeah, jump a Javelin and follow your goals. Think about what you want to do, in the next day, the next week, the next month. By breaking it down into the criteria of what you need to succeed, you can achieve great things and achieving your goals is way more rewarding than anything else.