The ‘Fly Girls’, a team of badass women led by Amy Chmelecki, set a sequential vertical world record in the skies above Sebastian. Amy also ran an event bringing elite female athletes together from a range of sports, and found they had a lot in common! 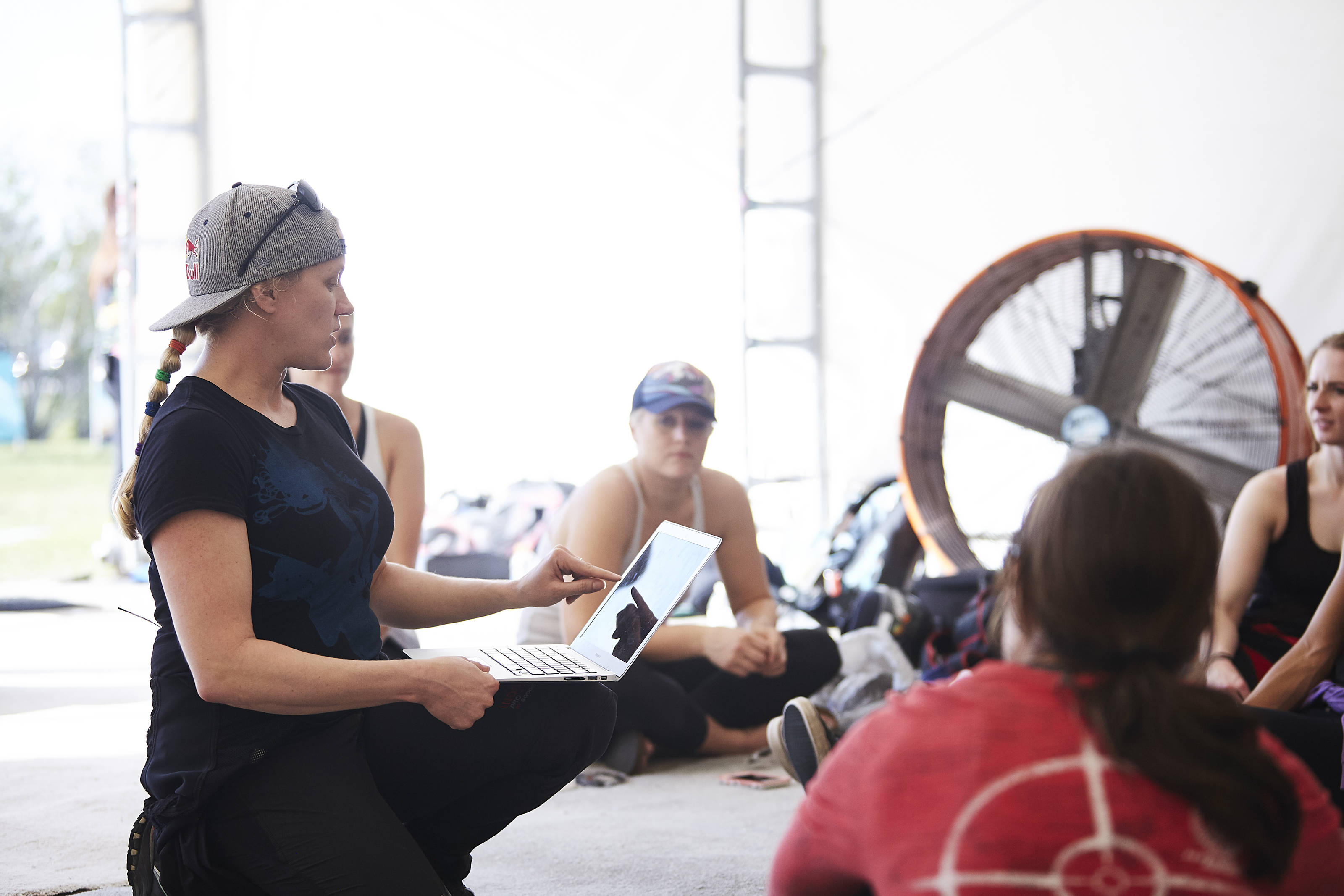 Red Bull Air Force member and female skydiving legend Amy Chmelecki hosted the world’s best female jumpers and athletes from across the sports spectrum for a summit designed to address pressing issues facing women in sport. In addition to discussing important topics like equal pay, safe work environments, and increasing participation, Amy did what she does best – set records. 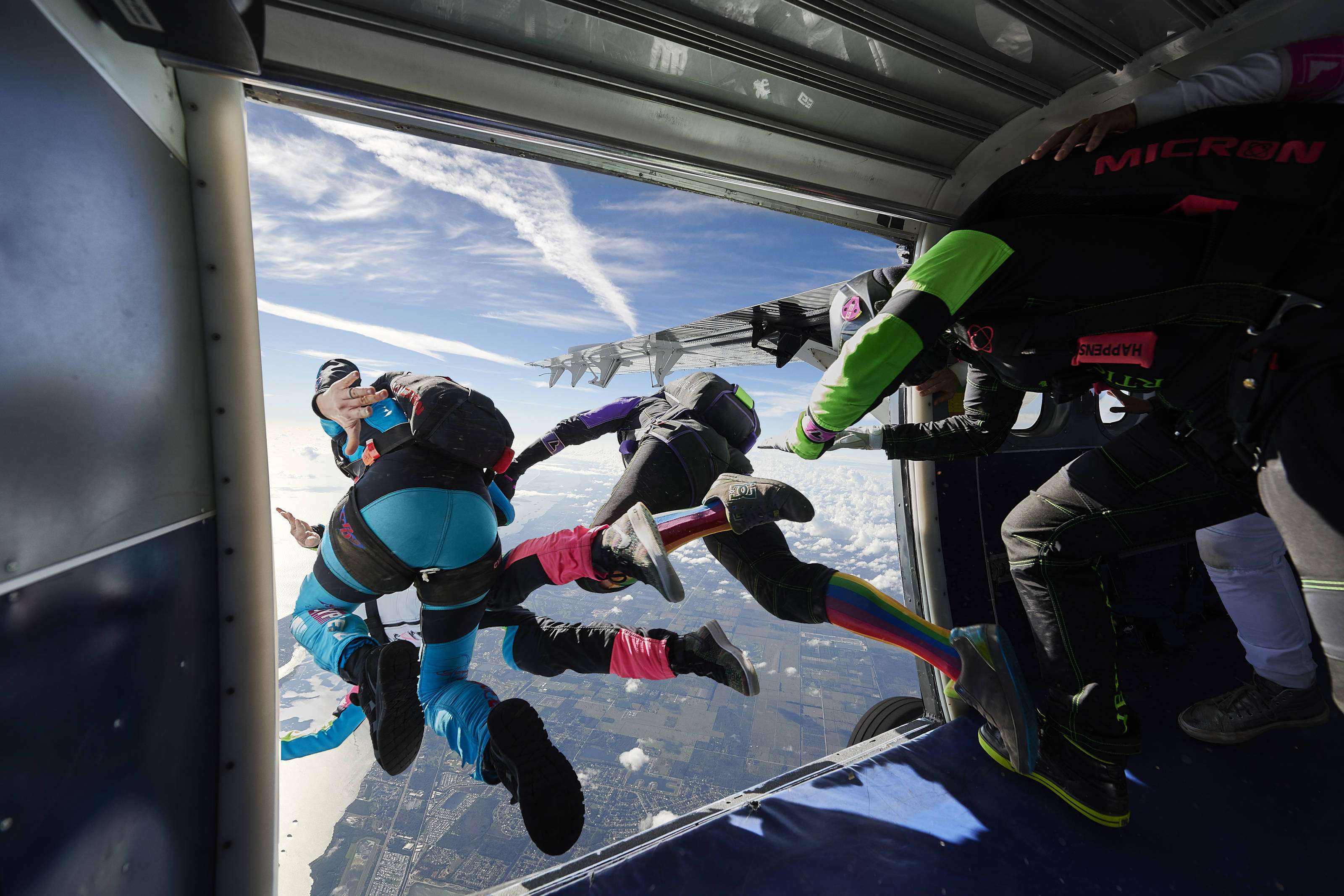 The summit gave women from a variety of sports a forum to discuss the triumphs and challenges that come with being women in sports where attention, participation, and compensation are so often dominated by men. On hand to share their thoughts were USA soccer goalkeeper Ashlyn Harris, former pro skier and current President of the Women’s Sports Foundation Grete Eliassen, and 19-year-old pro wakeboarder Meagan Ethell who was blown away by the teamwork it took to pull off the world record.

Afterwards the team and Red Bull brought back a classic and mega fun competition, the Pylon Race. Four girls raced head to head around human pylons while in freefall. The fastest in each heat moved onto the next round. Sharon Har-Noy, recent new mother, proved to be the fastest by winning all 4 rounds! 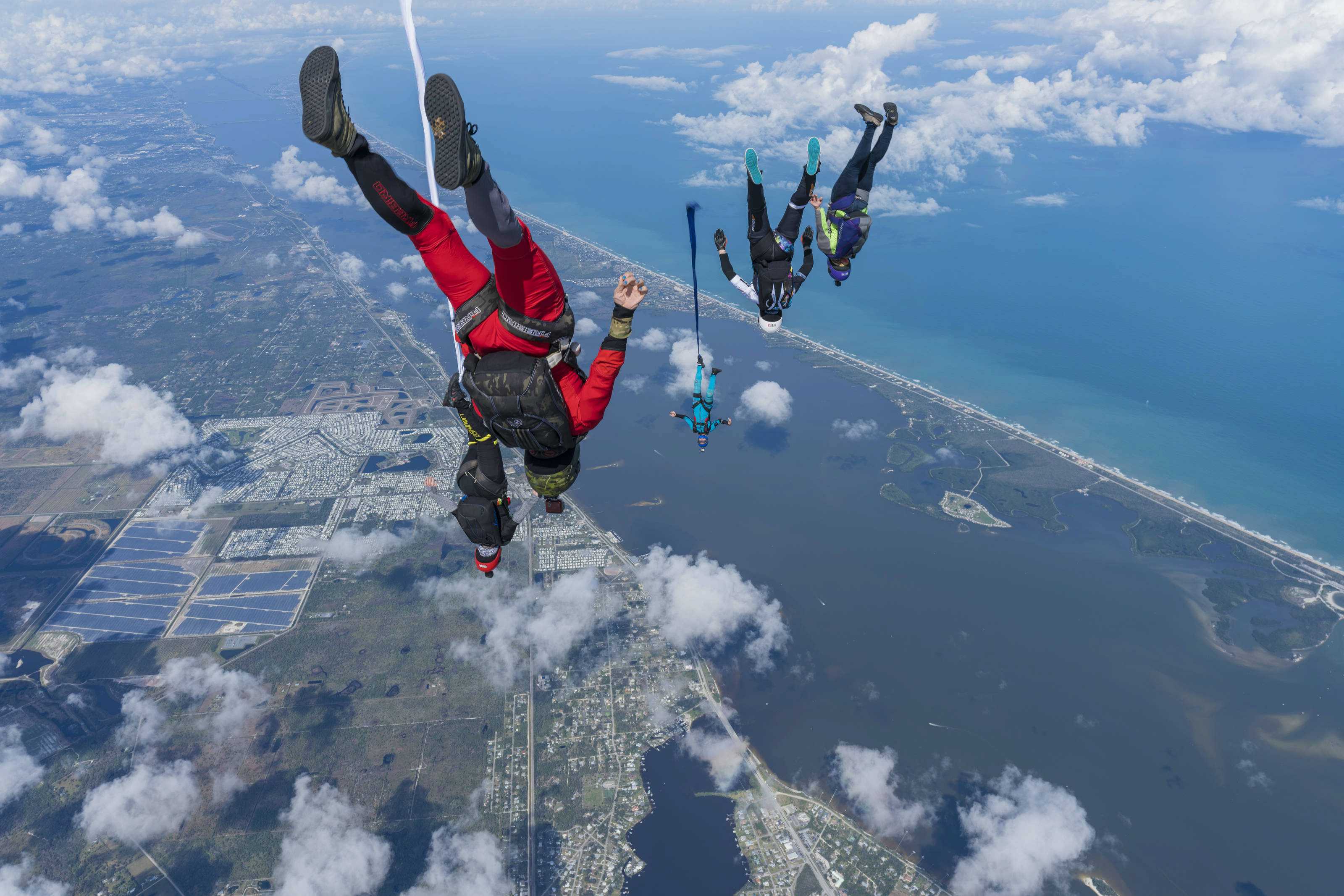 We asked Amy to tell us about the FlyGirls project…

How did the idea come about?

“The concept for Fly Girls was dreamt up by Tracy Singing, one of the marketing managers at Red Bull. She approached me about it “Skydiver Style” over a few bears by a fire, but it was also “Red Bull Style” as we were at Willie Nelson’s ranch in Austin, TX. Tracy wanted to create an athlete summit for female skydivers. We first started talking about it in early October, 2017.”

Tell us about the event in your own words

“The way it all worked out was pretty cool! We had weather and had to improvise on the fly. We were scheduled to be there 2 days. The open forum with the EPIC VIP athletes was scheduled for the evening after the first day of jumping at Skydive Deland. Day one, we were planning to dedicate 8 jumps to the record attempts and then start some pylon racing. Instead we watched the clouds all day. Towards the end of day one, we found out there were blue skies at Skydive Sebastian. We all packed up and drove 2 hours across Florida in hopes of getting in a few jumps at sunset. We left our entire set-up behind us. It was a risky move, but we felt it was our best chance to get in a few jumps. We got to Sebastian, blue skies! We quickly filled out the paperwork, got geared up, walked to the plane and got put on a weather hold. The clouds took over and we kissed our chances of jumping on day one goodbye.

“VIP athletes, Ashlyn Harris, Meagan Ethell and Grete Eliassen re-routed there travel plans to meet us at Skydive Sebastian. Although our pretty form stage was left in the rain at Deland, all we really needed for a good conversation were the 27 Fly Girls and our three inspirational guests. We got to know each of these women, hear their stories, their challenges, their successes. We all came from different sports. We could relate on some levels, but mostly we just learned about each other’s sports and careers. We spoke about what it was like to be a female in a male-dominated sport. To be honest I was nervous how the forum would go down because as we all know skydivers often live in our own little worlds, we also sometimes make jokes that don’t go down so well outside the skydive community. I am sure we have all experienced that awkward post-joke silence during holiday dinner. Anyway it could not have gone better!!! These women were so inspiring and empowering. Their stories filled us with focus, energy and determination.” 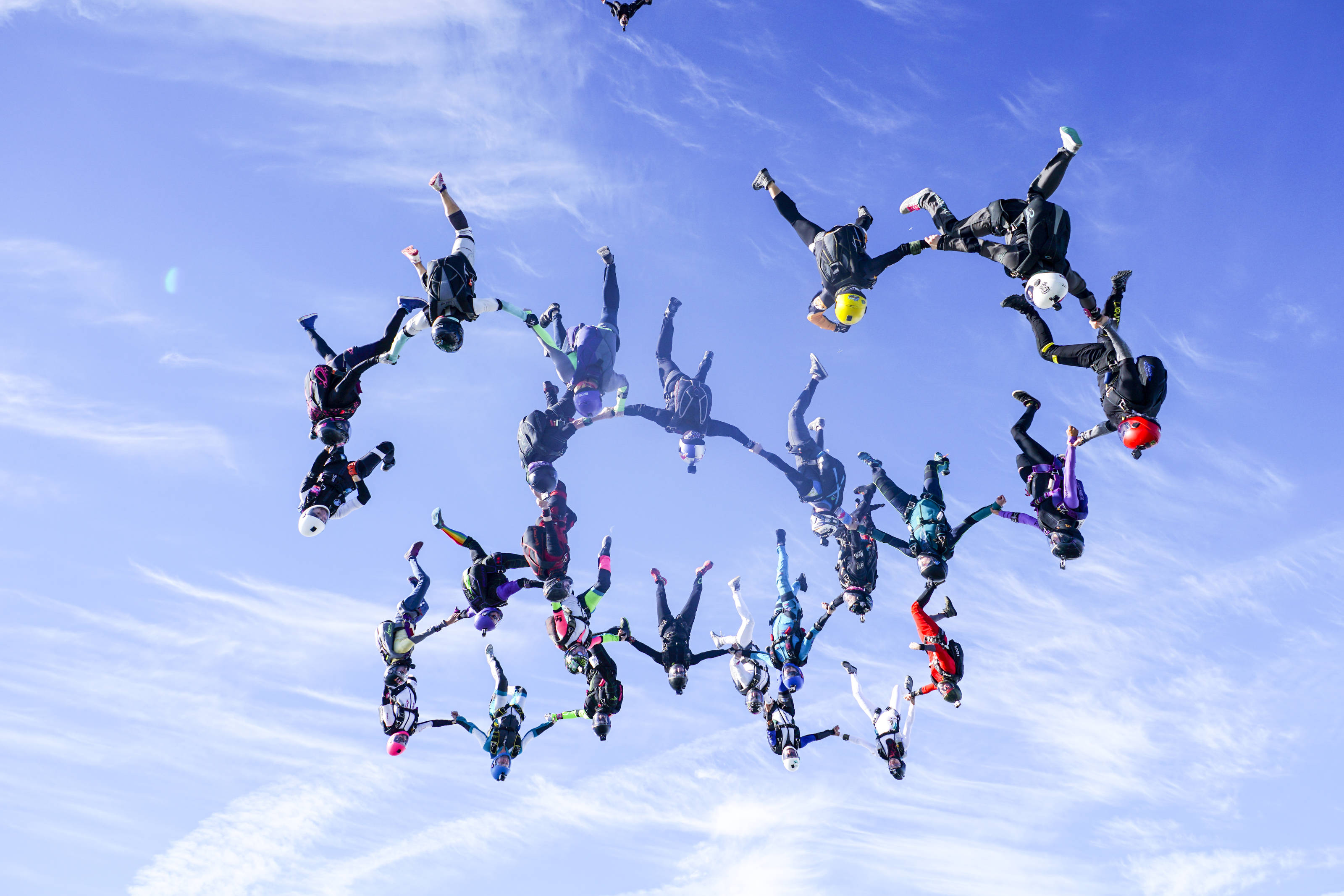 “Day two we woke up to blue skies. We dirt dove, got on the plane and nailed the world record on the first jump. I have never experienced a world record where the flyers were in the ideal state of mind right out of the gates. I am positive that the forum the night before, empowered each one of us. Every women on the record was completely focused, calm and confident. Everyone now flew with perfect efficiency. It usually takes a few jumps for the nerves to calm, for people to breathe, relax and execute. I thought it would take us about 5 jumps to get this record done. It was cool to see good conversation with badass women enable us to by pass the mental struggles and just execute! “ 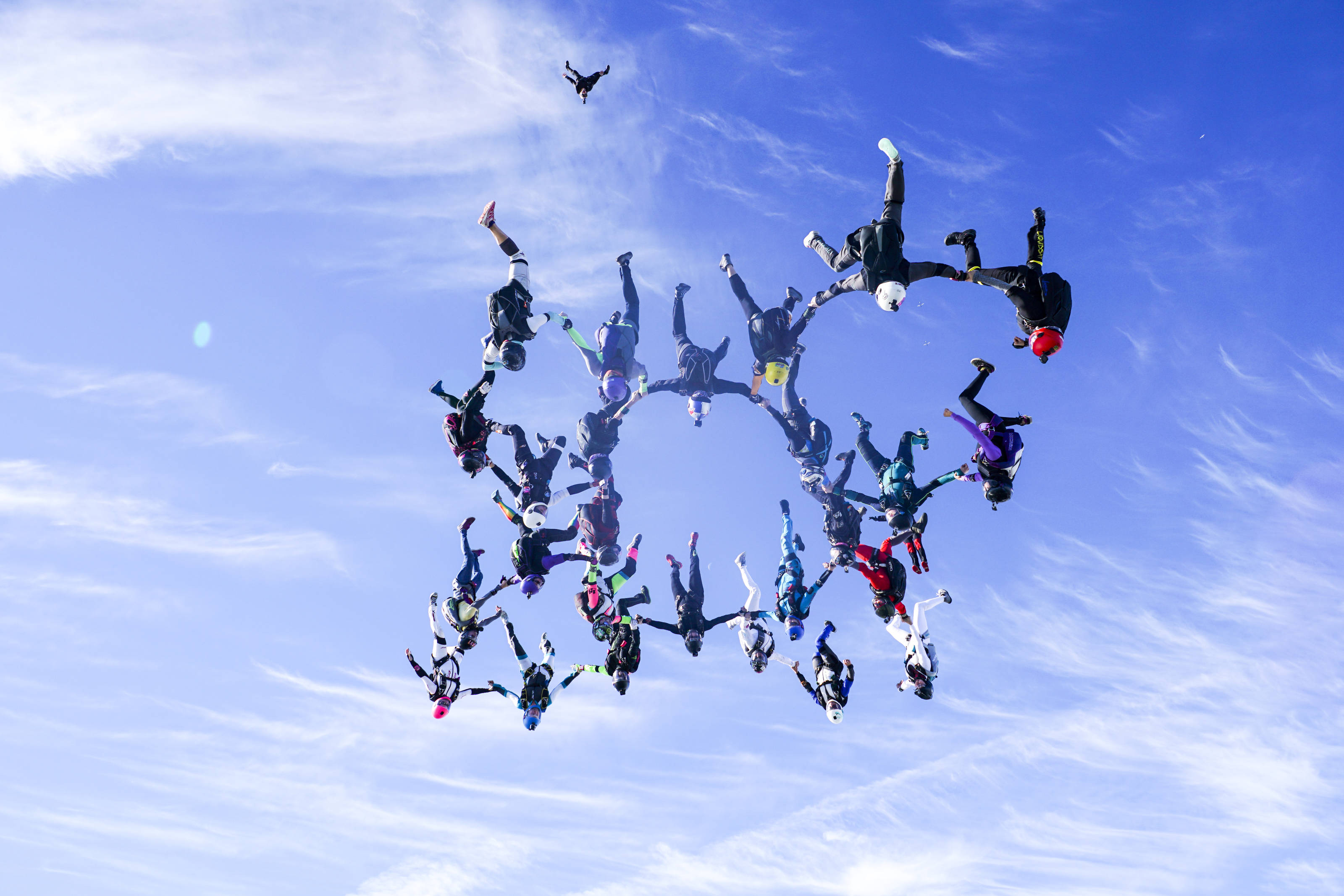 What did everyone gain from the experience?

“They were all so grateful! During the forum everybody really opened up and at times during our conversations we were all revealing somewhat vulnerable aspects of our lives. It was super cool for all of us to learn from each other…. Meagan Ethell was able to stick around for the record the next morning and she was so excited for us. There is a skydiver inside of that girl just waiting to be born. I hope they all know how much they helped us not only for the record, but since then as well” 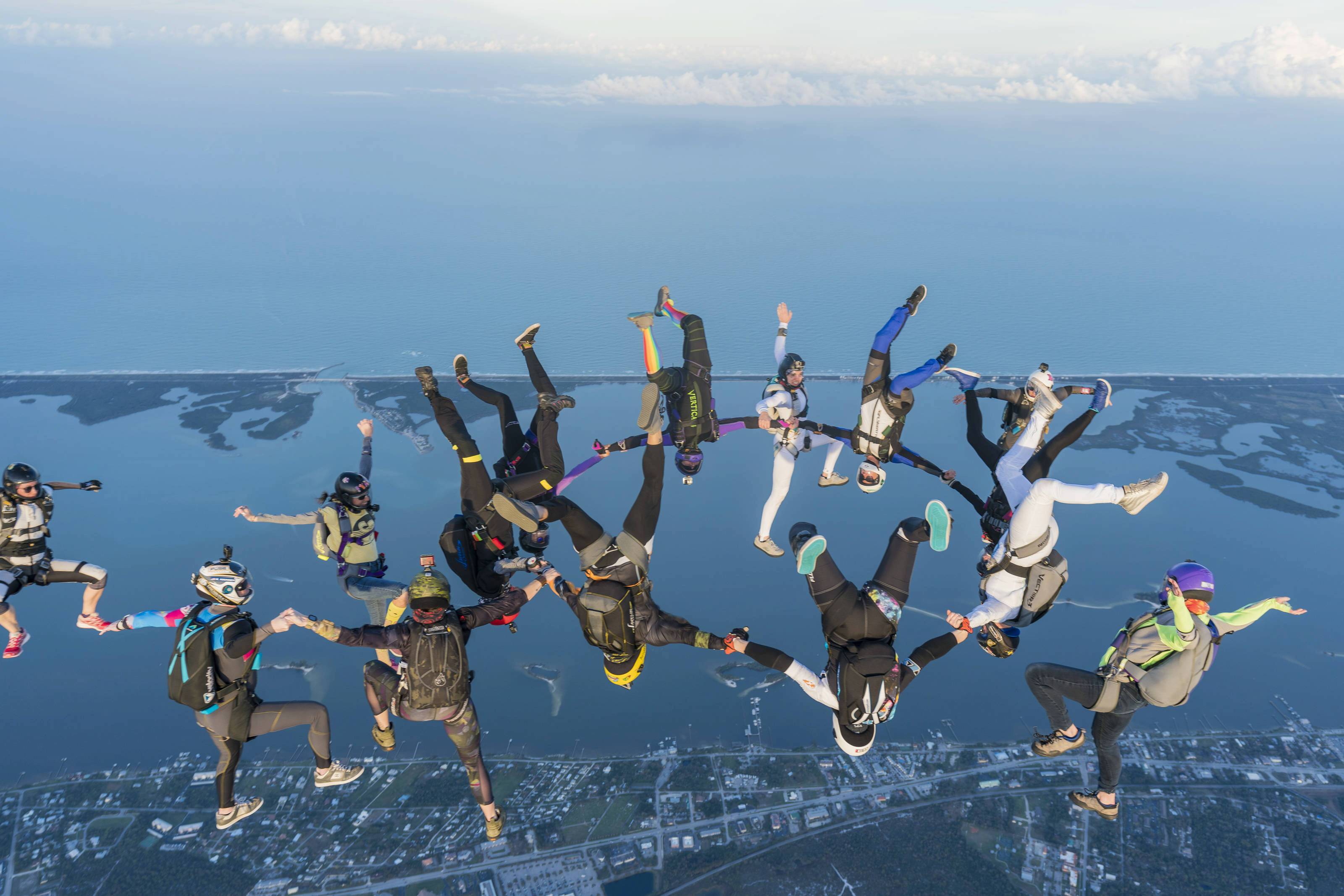 What’s so special about getting a group of female flyers together?

“There’s so few women in skydiving that when you’re able to get us all together for something like this it’s inspiring. It is just so unusual to have a plane-load full of women, It never happens on a normal day at the DZ. It is super nice to experience that once in a while. There are the obvious things like the plane smells better and there is more leg room But there are also some subtle differences like the way we all communicate. I am not in any way saying that communication between a man and women is bad or difficult, it is just different. I think a healthy balance between men and women working together is important. Events like this one feel like they balance things out for me.”

Will we see more from the FlyGirls in the future?