Excuse me while I Kiss the Sky… 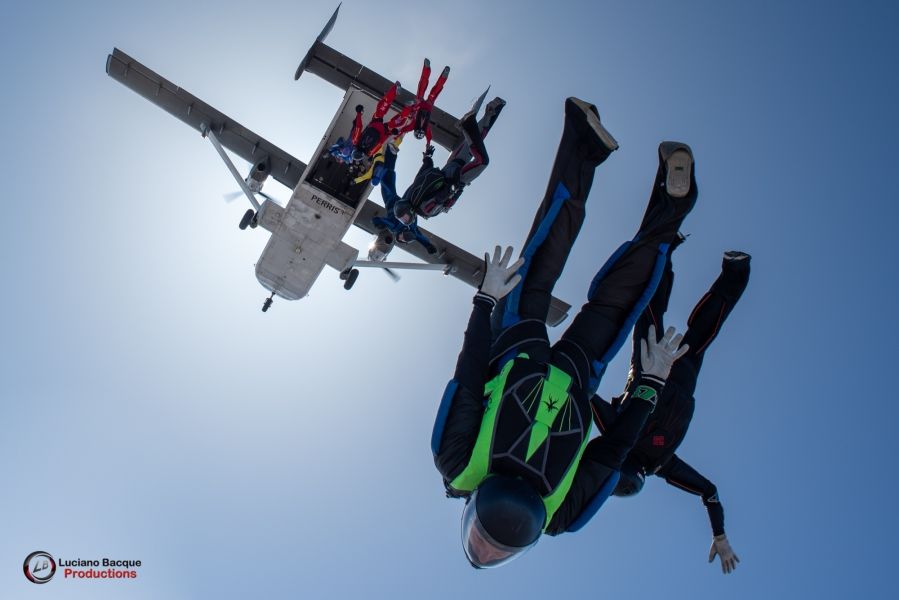 64 skydivers from 21 countries gathered at Skydive Perris in May for the annual Spring Fling, a prime FS skydiving event kicking off the summer in style. Every jump is a formation load at 16,000 feet from 3 Skyvans, with an invited guest list of 64 great, good-vibes skydivers.

We made 18 jumps over 4 days, trying an eclectic and ambitious collection of high level (read ‘crazy’) formations designed by P3 Skydiving coaches Dan BC, Kate Cooper and Doug Forth. 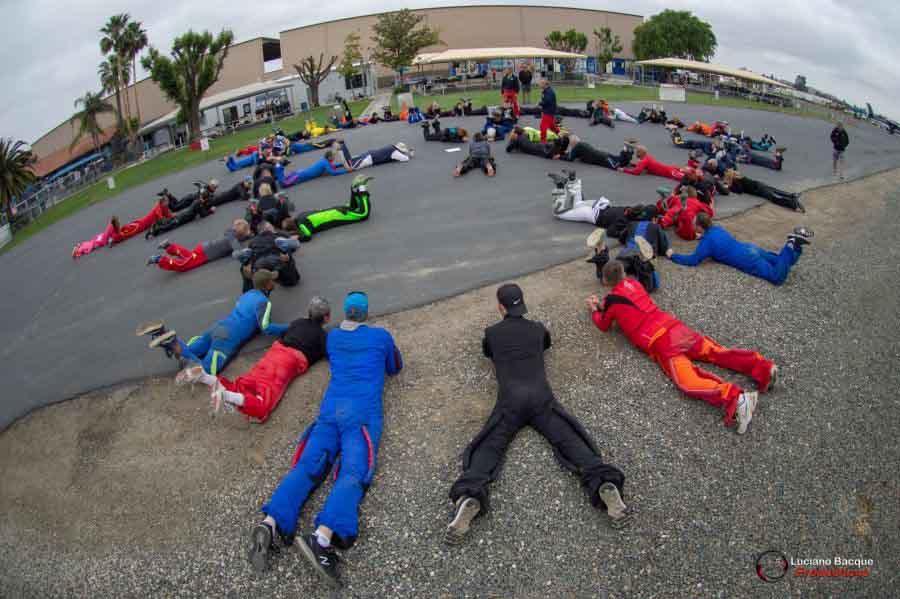 The group is a refreshing mixture of ‘A’ Grade veteran skydivers and up and coming talent, some plucked from P3’s recent big-way camp and 100-way camp at Perris just prior to Spring Fling. This year all P3’s big-way events were over-subscribed, with waiting lists for each. Their annual big-way camp featured 124 participants from 23 countries, with jump numbers ranging from 120 to 25,000. This included 24 from Brazil who had their own event FB page that was started by one participant from 2017 who talked 23 of his countrymen/women into attending! There were also 13 Danes in training for the Danish National Record very soon in June. The ‘100-way’ camp had 105 attendees who made great skydives but were shafted by clouds and only had skies for 5 jumps. 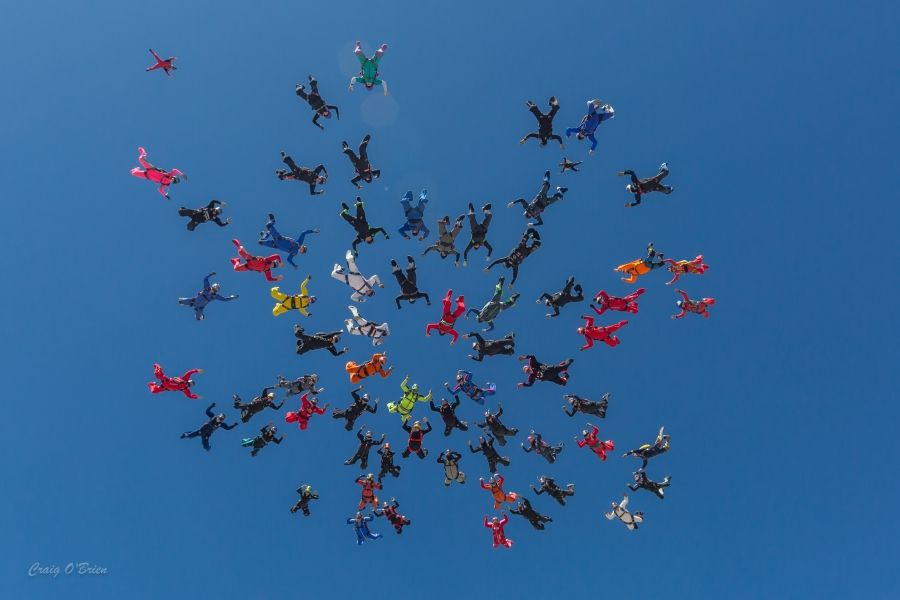 The Spring Fling first day started with 4 jumps, 2 at each of 2 formations. We completed both formations, and did a second point, with a complete break on one 64-way. An awesome start, giving high confidence and trust in the group. The next days the difficulty level exploded with a series of extraordinary formations, posted daily as our breakfast surprise. 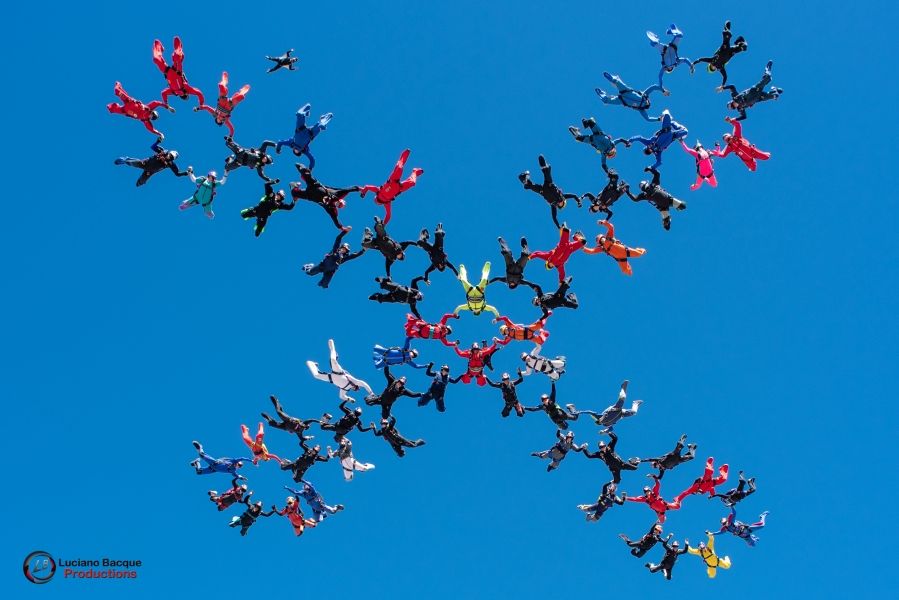 A beautiful cross formation demonstrated the skills of the group, with the four arms of the Kiss flying in perfect symmetry – in testament to the Gospel According to St Dan – fly position not grips.

Excuse me while I kiss the sky – Jimi Hendrix 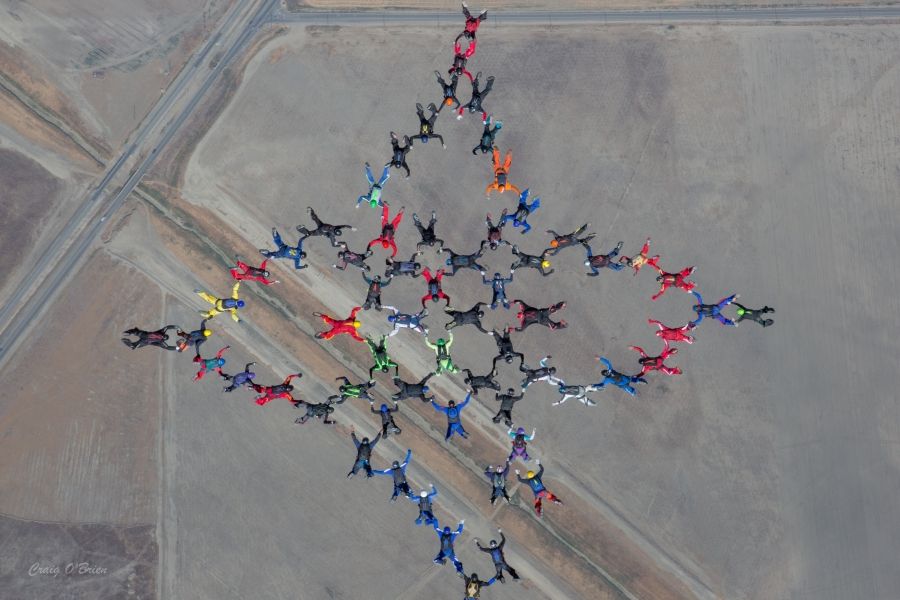 Jewel in a Crown

There was a bipole jewel inside giant open diamonds, requiring precise symmetry lining up no-contact with rows of others, sometimes 20 feet away. This was a humungous formation with all that open space – loads bigger than the average 64-way. As a trail plane floater on one of the cat tails on the very outside, I watched this beauty build in front of me and was awed by the delicateness, symmetry and size of the formation. Sadly you can only see my hands in the photo! 😉 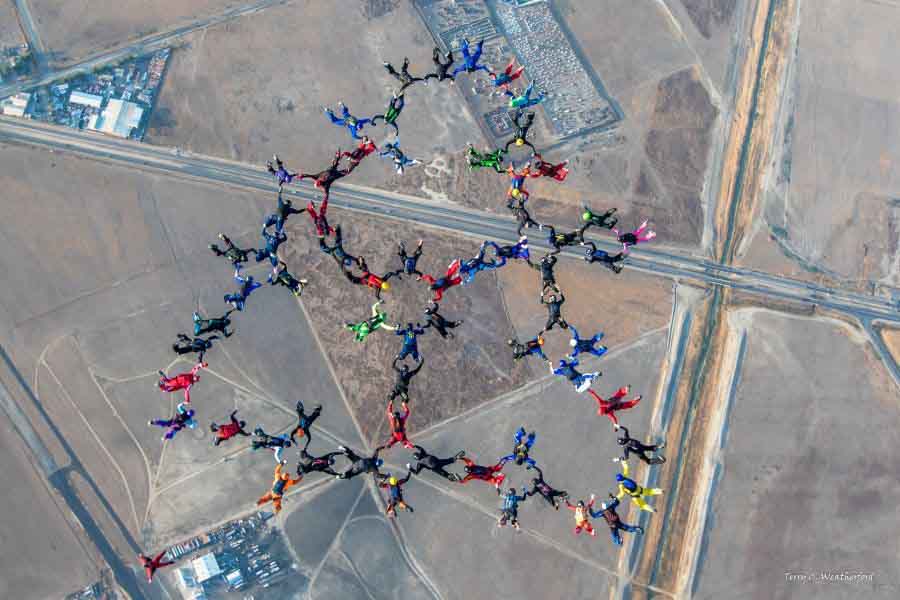 A monster beast with very little structure, delicately balanced around triple 3-way cats, each adorned with three murphies had us holding our breaths when it was posted on the morning noticeboard. It proved almost cat-astrophic when a fall rate problem on one cat sent it through the middle, taking out the entire formation ‘Napoleon-style’ (BlownApart!). Over 50,000 jumps were involved in this funnel!

The final masterpiece was Darth Vader’s Tie Fighter spaceship, inspiring oohs and aahs from the crowd. This baby just defied the final docking – but was still über cool. It’s such a fabulous picture formation we have to try again. Same time Next May? I’m sure we can do it!

Having been doing big-way for over 20 years it’s amazing how new calamities still occur. The camera strap in the Skyvan door broke on cameraflyer Terry Weatherford in Trail plane A, just after the green light, causing most of load to leave before the lead plane. Another jump saw a rather delayed exit on the C plane caused by LJ ‘What Green light?!’ Wobker – “GO! GO! GO! GO! GO! GO! GO!!!” 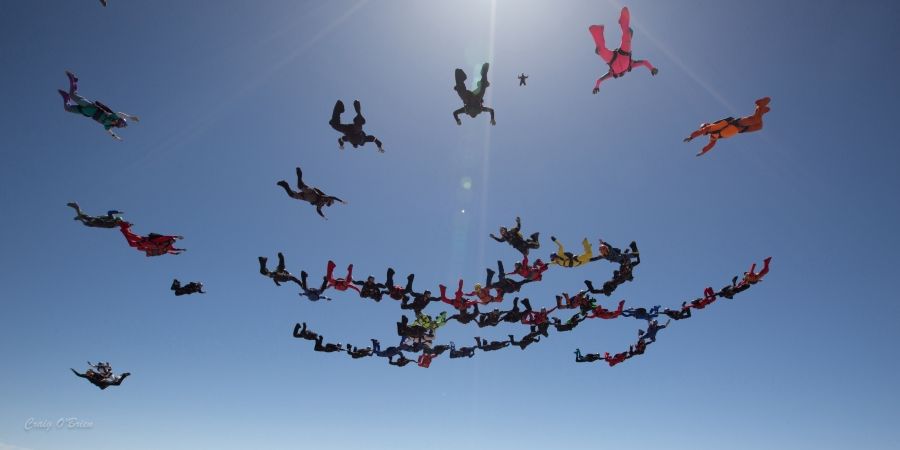 Shoot for the Moon!

Not all formations completed but sometimes that’s the name of the game. It proves we were pushing the boundaries. The jumps were undeniably challenging. They almost worked. At the end of the day what difference do 1 or 2 grips out make? We built amazing shapes in the skies over Perris, unique and special formations. The Tie Fighter was awesome. It looked so damn cool in freefall! Nice one P3!

Shoot for the Moon. Even if you miss, you'll land among the stars – Les Brown 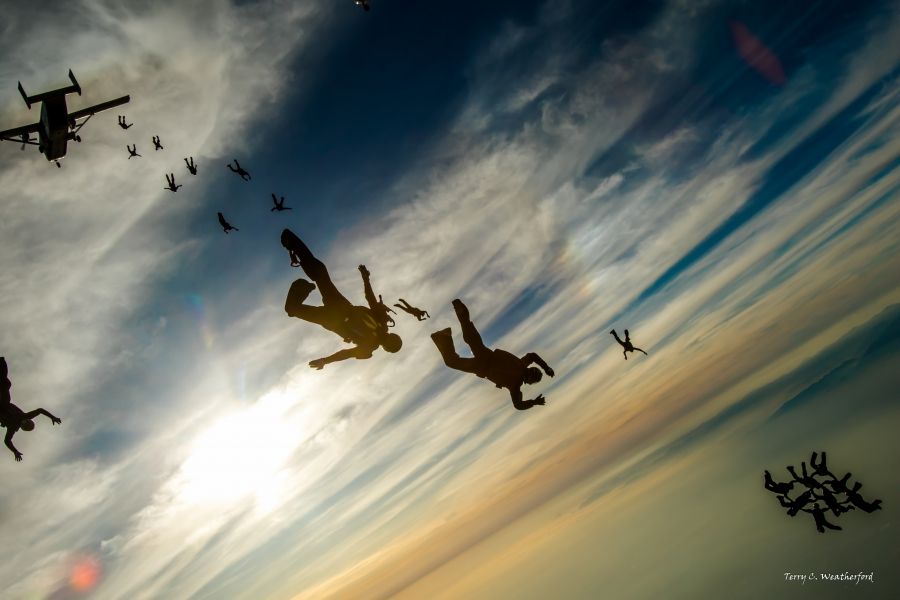