Follow these five processes for a safer canopy flight every jump

A systematic process starting on the ground and ending when you walk off the landing area will maximise awareness of your flight plan and others under canopy. Flying together safely is our collective responsibility. We all have an important part to play, especially as the skies are becoming increasingly crowded, and the jump plans more diverse and complex.

Familiarise yourself with the landing area and landmarks. If it’s a new DZ you’re jumping at, you will need to get a DZ brief. Even if you’ve jumped there before, it’s still a good idea to check with the staff if anything has changed since your last visit.

Local knowledge is key, there may be some areas that look perfect off-landing sites, only to find out too late that they are in fact full of hazards!

Understand where you fit into the exit order and study the wind conditions not just on the ground, but also up to exit altitude. Jump planes are getting bigger and the disciplines happening on a regular basis at our DZs mean the skies will only get more crowded and complex. Take time to consider your wing loading against everyone else’s on your plane load. Are you one of the higher wing loadings which means you will be landing first, or are you a light wing loading in which case there is little point in trying to race down as you will be holding people up?

Consider the winds at altitude and how they will affect your canopy flight. For example; is that cool tracking jump you have planned going to put you in a situation where you are flying into a headwind and you can’t make the DZ, or put you so far away that you can’t reach the DZ with enough altitude to make your landing pattern?

As a minimum you should know and make informed decisions based on:

So, you’ve just finished turning a ton of points or finished that angle jump at a speed where you’re glad you double-knotted your shoelaces! It’s not over yet, there’s still the matter of getting down safely, and canopy flying is also fun. Once you are in your own airspace give a clear wave-off signal and deploy your parachute. Spend the next few seconds scanning for close hazards, rather than staring at an opening canopy. The time to look is after your count, when you can make a decision as to whether you have a good canopy or not. Generally you will know if you’re having a malfunction, there’s no need to stare when you could be using that time to check for other jumpers nearby. If you need to change your heading for an avoidance manoeuvre, use your rear risers rather than unstowing your toggles.

Now you’ve avoided any potential collisions straight after opening, it’s time to pick out the other groups. Fly at 90 degrees to jump run after opening, as the group after you might still be in freefall. Take this time to run through the TAP checklist.

Identify groups before you and the groups after. Start the scan from above you (will these people catch you up and overtake you?). Next scan downwards and identify anyone on level with you. With these jumpers you need to work out who is descending faster. Finally check for anyone who is below you.

What is your altitude, do you have enough altitude for any planned manoeuvres and can you reach your intended flight plan?

Where are you? Where do you need to be?

This checklist can be used from post-opening to landing and prioritises what you need to consider during your canopy flight.

4. Flight back to the landing area

The few thousand feet you have from opening to landing should be used to ensure you will reach your intended landing area (by applying the correct flight mode to your canopy) and creating vertical separation between you and the jumpers you share the sky with. Everyone flying as fast as possible creates traffic issues lower down. If you know you are on the slower side in terms of descent rate on your load, there’s no point spiralling down to then create a traffic issue. Not ignoring the fact that as the skies get busier, spiral turns create more and more danger. The safest canopy flights would be ones where we made no turns; of course this is impractical. The next safest would be performing turns of no more than 90 degrees. This makes you more predictable to others and you can see emerging traffic issues better than when performing bigger turns.

Once you’ve entered the landing pattern, continue to be vigilant. Providing everyone has done a good job of establishing vertical separation up high, the ideal scenario is that there is no more than one canopy on each leg of the pattern.

Make your final approach in full flight (arms up) in order to turn that airspeed into a good flare when it’s time to land. Keep flying your parachute even once you’ve touched down, don’t give up and throw your hands up. They are still connected to the toggles and therefore your canopy. Just because you are on the ground and are done with flying, the canopy might not be, so stay in control. The canopy is done with flying when it is crumpled on the ground!

Don’t forget there might be others landing after you, so face back up the line of flight as those jumpers now have priority. The jump doesn’t end until you are back off the landing area. 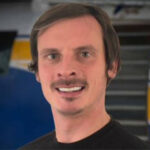 Member of skydiving band Winging it!