A Jump too Far

We can all learn from this accident. I know I did.

This post is long over due. In 2014, shortly after this jump, I was asked not to share this video. The jumper that got knocked out never wanted his family to see it, so I respected his wishes. Well, he posted it recently. In my opinion, it was lacking a proper explanation…

10th jump of the day

I was visiting Skydive Dallas to do some organizing, one of the local instructors had contacted me about putting on an Angle/Tracking camp. I didn’t really know any of the participants, so I relied on the locals to sort out the groups.

This video is of the 20th and final jump of the weekend. We did 10 jumps that day. The first 9 went off without a hitch. Most of the jumpers were done jumping, it was down to me and 3 participants. On this jump, they decided that they wanted to do a dive flow that I had done earlier in the weekend. It’s a head down drill dive that I have done more times than I can count. Basically, we exit head down, open up to a round, and drop grips. Then, I move away from the group and stop, so they can work on approaching a head down group. We don’t pick up grips again, just fly on level. The plan is to move, STOP, move, STOP. We would do that a few times until break off. We walked this dive on the ground, everything from climb out to break off. I was very clear about the dive plan and everyone seemed to understand.

Hindsight being 20/20, we should’ve stopped at 9 jumps. It was a hot Texas summer day and I was wiped out. I’m a full-time skydiver that’s accustomed to jumping all day. If I’m tired, it’s safe to say that these jumpers were tired as well.

You can see in the video: There was some confusion between the jumpers on climb out order and exit position— even though we dirt dove it (that’s a good indication that they were tired. I’m embarrassed to report that the jumper that gets knocked out forgot to buckle his helmet, and everyone failed to notice). We exit, and it spins around a bit and then settles. We drop grips, and I move away.

At this point, one jumper goes off level and bails to his sit. I stop. The other two jumpers approach and stop. Seeing how far away the outside jumper was, I decided not to move further away. I wanted him to make it back into the skydive. If he was at my 12 o’clock position, I decided to drive towards my 3 o’clock position to shorten his approach. I quickly realized, his approach was at a very high speed. I stopped immediately. It was clear to me that he was fixated on me and unaware of the other jumpers. Once he recognized that he was doing a fly by, he flattens out to his back and picks up speed. He then goes into a fetal position and crashes through the head of another jumper. The jumper that was hit was fixated on me as well—he never saw the dude coming.

The hit obviously had knocked him unconscious. I immediately go to my back and start to drive at the jumper who who was hit. He was in a flat spin on his back. The only thought I remember having was “Get there!”. I then transition to my belly, and use all the surface area I could to fly over to him. I stop his spin, and tried to roll him over to his belly to no avail (apparently roll overs are easier when they’re awake). At 5,000 feet I make the decision to pull his reserve. My logic behind the decision of pulling his reserve, rather than his main, is that the reserve is designed to open and land more docile than a typical main parachute. If he fell all the way until his AAD fired —he would be under a reserve anyway, but with 4,000 less feet of altitude to regain consciousness. I then got down to the ground as fast as I could, so that I could notify someone to call 911.

The KO’d jumper regained consciousness under his reserve, and somehow flew a text book student pattern. He landed like a sack of potatoes in the main landing area. The other jumper landed safely in the main as well. Everyone walked away that day. Some with a bruised ego, some with a bruised face.

So what did I learn?

Ask more questions. Make sure that everyone is ready for the planned jump. The jumper that flew into the head of the other guy was a tunnel instructor. He kicked ass all day. 9 jumps with no issues. When he wanted to do this 10th jump, I ASSUMED he could handle it. I was wrong. Tunnel is an excellent place to hone our skills, but it is no replacement for a skydive.

I’m sharing this because we can all learn from it. As jumpers we do our best at minimizing the risk, but we can never eliminate it. Everybody makes mistakes. The bigger mistake would be to not learn from those mistakes.

Truth is, this accident could’ve happened to anyone. This accident changed the way I go about jumping—for the better. Hopefully it’ll do the same for you! 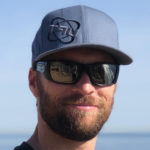 He has over 9,500 jumps and is an AFF-I, Tandem instructor, Pro rating skyydiver and has multiple World Records - including Head up, Head down, and Vertical sequential. He also has multiple medals at USPA Nationals in 4way VFS and Artistic Freefly.

Andy is sponsored by UPT, PD, and Vertical Suits.