There is no doubt innovation has always been at the forefront of Bill Booth’s mind. Never satisfied, his constant passion for research and development led to many huge advancements in skydiving technology through his company, United Parachute Technologies, aka UPT.

Here we take a look back at a timeline of events, highlighting the main inventions throughout UPT’s impressive history.

It’s in Bill’s nature to answer complex questions with simple inventions. Most of these innovations were developed by Bill in what he describes as a necessity.

All of my inventions are a result of problems I have had, or watched others have, in dealing with malfunctions of existing equipment. As they say, ‘Necessity is the mother of invention.’ It doesn’t make any sense to invent something that isn’t needed. For instance, I was tired of pilot chute hesitations, so I invented the hand deployed pilot chute. I was tired of worrying about what first jump students would do if they had a malfunction, so I developed tandem jumping. There were two tandem fatalities involving jumpers tumbling into reserve lines after a cutaway, so I invented the Skyhook.”

Like most good things, it all started in a garage in Miami.

Not satisfied with the current skydiving equipment systems, Bill began experimenting and building harnesses on a rented sewing machine. By the mid 70’s he had already made two monumental discoveries. In 1975, Bill developed the Hand-Deploy Pilot Chute System, which revolutionized the way sport skydivers deploy their main canopies.

Just one year later in 1976, the second invention was created, arguably Bill’s greatest contribution to skydiving – the 3-Ring Release System. These innovations may have seemed groundbreaking, but it turns out Bill was just getting started.

This was the decade of the tandem. In 1983, Bill, in partnership with Ted Strong, developed a skydiving system which allowed people with no knowledge or experience of skydiving to jump with an instructor. Not only did they work tirelessly to make this system as safe as possible, this discovery now made skydiving accessible to everyone.

1980 also marked the beginning of the all-time most popular harness and container on the market, the Vector.

The 90s sparked a revolution in skydiving, and the rise of skysurfers, freestylers and freeflyers. This created new challenges in the container market as rigs were now required to resist much faster speeds, in order to prevent premature deployments. In 1994 the Vector II became the world’s first freefly-friendly parachute system. In 1999 this was improved even further with the release of the Micron, a tiny version of the Vector, specifically designed for freeflyers, who were jumping smaller canopies.

It’s a new millennium, which means it must be time for some more UPT innovation. 2002 saw the release of the Sigma tandem, which included the updated Disk Release System, preventing out of sequence deployments and drastically improving the safety of the tandem system. In 2003, the Skyhook made its debut as the world’s first Main Assisted Reserve Deployment (MARD) system. Just a few years later the invention of magnetic riser covers continued to upgrade the safety of the Vector system even further. (Note, in 2005 the company name changed from Relative Workshop to United Parachute Technologies, aka UPT.)

In 2018, UPT, along with Vince Reffet released the Mutant harness, the first supine harness that is also freefall friendly. This pioneering discovery completely changed the discipline of canopy piloting. Its potential continues to be explored by UPT athletes to this day.

I think it’s safe to say on behalf of the entire skydiving community that we are grateful to Bill and UPT for all of the revolutionary inventions and skydiving technology developed across the years. We can’t wait to see where they take us next. 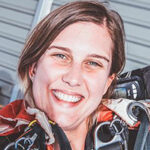 Hannah is a skydive instructor, aspiring load organizer and copywriter/account manager at The EdgE. In 8 years, she has completed 5,500 skydives, having previously worked as a tandem instructor and videographer at Skydive Dubai. She has a PhD in molecular genetics, but a passion for skydiving that sparked a career change in the pursuit of making what she loves her job.

Hannah is stoked to be sponsored by UPT, Vigil, LB Altimeters, Deem Flywear and The EdgE, and proud to jump PD canopies.