The biggest wingsuit event in Europe…

The Baltic Wingsuit Meet each year attracts a larger number of participants. Each year the numbers more or less double. This year we welcomed 50 people from 16 countries, including one visitor from China! I believe the BWM is slowly starting to be considered as the biggest wingsuit event in Europe.

Every day, the Baltic drop zone is oriented towards commercial tandem jumps, but also there is located an enthusiastic wingsuit school, WSpoint. For this one week of a year the dropzone is available exclusively for enthusiasts of wingsuit jumps.

As every year, the plan was simple: attract lots of experienced wingsuiters to one place, promote Poland abroad and popularize the sport of wingsuit. So, the plan was ambitious!

We’re talking about lots of wingsuiters and a huge operation in one place. To make it simple and as safe as possible, and arranged specially for the event, the air space was reorganised to let us fly always in straight lines. This made it easy for everyone to land on the DZ, and avoid random terrain landings due to miscalculating WS navigation.

Additionally, a huge air space was reserved to fly over Vistula Lagoon and drop wingsuiters. This was a challenging task due to very active NATO air forces flying close to the Polish border.

As in previous years wingsuiters had two SM92 Finist available, these are capable for Aircraft Wingsuit Formations (AWF) and a Cessna Caravan. This gave us the opportunity to drop enough people to establish a new AWF record of 20.

Of course, the biggest magnet for everyone was to do AWF with the Finist. Who doesn’t like to fly with the plane?!! No hands up?! 😊

The program for the day was simple and followed the event’s name, the Boot Camp Boogie. Like at a military camp – collective breakfast in the morning, jumps, break for a lunch, jumps again and at the end of active day, watching a video production from the whole day, WS seminars, discussions and socializing at bonfires. 😊

In addition, as at any proper boogie, were top European Load Organizers, who were responsible for the jump-run planning and safety of groups. Top-shelf attractions, which are usually not available at the same place and time were XRW, AWF, jumping over the Vistula Lagoon, beach landings and serious 24-wingsuit big-ways.

This year at the boogie we managed to attract almost all manufacturers of wingsuit-related equipment. Some of them even came personally to see, talk and – what is most important – listen. 😊

Here was the option to fly almost all wingsuit canopies in one place, newly designed suits, etc. It was amazing because the canopies are different and they are creating different opinions among users which one is the best. On the BWM we managed to kill this one!

We had live a TV broadcast from the event. There was a “stand-up” boogie lottery sponsored by wingsuit things factories. The idea was brilliant in its simplicity and nothing could thwart the plans but …

… the weather did not play ball; it was not as it should be during summer. That was the biggest problem, resulting in disorganization of the day.

Overall in 5 days we managed to make about 1,000 super-interesting wingsuit jumps, to build a new AWF record, and to set-up for more records in the future. What was most important was that we met a lot of fantastic wingsuiters. This community is growing. Slowly but we can see that is growing, making wingsuit jumps more and more attractive.

As a summary mostly, all of this was created from nothing; based only on cooperation with people with an open mind who were able to help and work together. I know for fact that this approach to customers is making a big difference. The event is over but orders for new products are already made and in production.

Was the Baltic Wingsuit Meet was successful? The smiles on the photos say it all. Surely there was lots of hunger left, because we could have done more. I also know for sure that most of these smiling people want this event to repeat. Right now, it’s hard to say whether and when the party will take place. There are suggestions and we are talking … Time will tell …

Thank you all participant and supporters for trusting in us and visiting Poland. 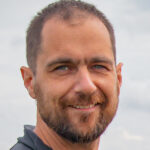 Piotr Walasek "Paf" did his first jump in 1997. He is a S/L and AFF instructor and Squirrel Wingsuit FFC coach.

Piotr is the main organizer of Baltic Wingsuit Meet boogie and the LO of Polish and World AWF records. He is running WSpoint.pl all about wingsuits website and Madeinblue and FOSS - Freelance Old Skydiving School where he promotes the beauty and safety approach to the skydiving sport.

Professionally he is a marine senior supervisor on the oil exploration rigs in the various world locations. Combining responsibility for overall safety on a high activity-driven oil platform and skydive teaching makes it easy to work with people both ways. Assessing and mitigating dangers, developing skills, explaining and promoting a safe culture in both environments communities.