More than a century ago, bold, brave women across the United States fought for their right to be heard and counted, ultimately winning the ratification of the 19th Amendment to the US Constitution, which secured women’s right to vote

Now another group of tenacious women are honoring those pioneers by following their example of living bold, brave lives of their own design and inspiring other girls and women around the world to do the same…

So was born the Highlight Pro Skydiving Team, a group of 12 highly experienced female skydivers who are carrying their inspirational message by performing stunning demonstration skydives at sites across the country.

Accomplished professional skydivers Amy Chmelecki and Melanie Curtis cofounded the Highlight team last year to commemorate the centennial anniversary of the ratification of the 19th Amendment. As Chmelecki and Curtis learned more about the fierce women who led the women’s suffrage movement in the U.S. a century ago, they wanted to celebrate the centennial by using skydiving in a momentous way to capture attention and carry on the message of those pioneering women.

The team began with the idea of performing one big demonstration jump into Nashville, Tennessee, on August 18, 2020, 100 years to the day that passage of the 19th Amendment came down to a single vote. In August 1920, Tennessee was the 36th and final US state needed to ratify the 19th Amendment, and Nashville is now home to the Tennessee Woman Suffrage Monument.

This original idea then expanded with fire and purpose to become the elite all-female skydiving demonstration team that exists today. The 12 women of the Highlight team have nearly 200,000 jumps among them, and the members average 20 years in the sport each.

What began with the goal of inspiring women and girls and sparking conversation about gender equality has grown into so much more. The initial idea quickly gained momentum, and by last August, the team had not only accomplished its initial goal of jumping into Centennial Park in Nashville, they had also performed several other high-profile demos across the country.

The jumps they had in mind required more than perfect accuracy. They planned to fly flags weighing up to 50 pounds, trail multiple smoke canisters, and fly and land in formation. The training camp allowed them to get used to the cumbersome equipment, work out rigging kinks and become more comfortable landing on target in challenging conditions with different kinds and sizes of canopies. The camp also gave them time to come together as a team and share their passion and excitement for their mission.

The team kicked off their campaign with their first demonstration jump July 18 in Seneca Falls, New York. There, more than a century ago, leading suffragists Elizabeth Cady Stanton and Susan B. Anthony first met and started the women’s suffrage movement. The first official forum on women’s right to vote took place in Seneca Falls, and Highlight members Keri Bell, Melanie Curtis, Kaz Sheekey and Maxine Tate performed the team’s first demo jump with smoke and flags onto the historic site.

Then came the big day in Nashville. On August 18, eight team members jumped into the dedication of the Tennessee Woman Suffrage Monument, exactly 100 years after the ratification of the 19th Amendment, giving women the right to vote in the United States. Team members flew giant flags displaying women’s suffrage themes, including “1920-2020,” “Votes for Women,” and “Shall Not Be Denied,” which pulls exact language from the 19th Amendment. Other team members flew smoke lines in the women’s suffrage colors of purple and yellow.

Continuing their centennial celebration campaign, the Highlight team had the exciting opportunity to jump out of a helicopter over New York City on August 26, Women’s Equality Day, 100 years to the day after the 19th Amendment was signed into law. As with the other demos, COVID restrictions prevented crowds from gathering. Instead, the team again had a live stream of the jump available on their Facebook page, with high-profile female announcers calling the action, including Katrina Adams, famed tennis pro, leader for equity and inclusion, and former president of the United States Tennis Association.

Team members Amy Chmelecki, Melanie Curtis, Sara Curtis and Kaz Sheekey enjoyed spectacular flights along the Manhattan skyline before landing with smoke and flags at Woodlawn Cemetery in the Bronx, where Alva Vanderbilt Belmont, a key financier of the suffrage movement, is buried. Chmelecki landed carrying yellow roses, a symbol of support for women’s suffrage leading up to the 1920 ratification. After the jump, the team members visited the grave sites of some of the leaders of the women’s suffrage movement, including Carrie Chapman Catt, Madame C.J. Walker, Elizabeth Cady Stanton and others.

On March 3 of this year, the team jumped into the Cotton Bowl Stadium in Dallas, Texas, to kick off Athletes Unlimited’s 2021 inaugural volleyball season. Athletes Unlimited is a new all-women’s professional sports league built on the mission of elevating fringe women’s sports to mainstream media while breaking new ground in pay equity with the athletes as the owners. It launched with women’s softball in 2020 and is following with women’s volleyball, women’s lacrosse and a second softball season throughout 2021.

In Dallas, four Highlight members jumped with bright smoke in the Athletes Unlimited team colors of blue, purple, yellow and orange and flew flags with sayings such as “#BeUnlimited.” The demo also included delivery of the game ball to the team captains with the skydivers landing on a 30-foot square logo in centerfield.

In addition to the demo jumps, so far this year, the Highlight team has also done special projects involving flying large flags to commemorate other noteworthy occasions and has shared the powerful images and video via social media and news outlets.

In honor of the 88th birthday of Ruth Bader Ginsberg on March 15, team members flew in formation, one carrying a flag bearing “RBG” and the others trailing colorful smoke. Ginsberg was a justice on the U.S. Supreme Court from 1993 until her death last year, as well as a leading advocate of women’s rights and gender equality throughout her long career.

For another project, the team wanted to say a special thank you to those who have worked tirelessly throughout the last year of the pandemic. Amy Chmelecki, Sara Curtis and Maxine Tate performed a jump where they trailed colorful smoke and flew gigantic flags imprinted with “Thank You, Healthcare Workers,” “Thank You, Essential Workers” and “Thank You, Dr. Fauci.” The team shared the beautiful images on World Health Day in April.

In May, Highlight held another full-team training camp, this time at Skydive Arizona in Eloy, Arizona. At the camp, they not only continued to refine their demo skills, they also bonded and shared the excitement over their mission. During the camp, a group of about 30 13-year-old young women from a nearby middle school came to the drop zone to learn about the team and the sport. Living up to their motto of inspiring girls, the Highlight team members spent time teaching the women about skydiving and all that goes into their demo jumps, while also motivating them to pursue their own passions.

Most recently, team members Keri Bell, Sara Curtis, Melissa Lowe and Maxine Tate jumped into the USA Softball Hall of Fame Stadium in Oklahoma in early June for a semi-final game of the NCAA Women’s College World Series. “The (WCWS) is an obvious partner for us because it’s all about lifting women up, really lifting women up into the mainstream media and showing more women of the world what is possible,” said Melanie Curtis.

As the Highlight Pro Skydiving Team continues to gain momentum, they’ll conceive of and execute more and more projects and demos that will showcase our spectacular sport to the public. And they’ll do it while holding true to their core mission of spotlighting women’s initiatives and other causes that elevate equality and empower women. These amazing, accomplished women are leading by example as they work to inspire women and girls to live bold, brave lives of their own design.

To learn more about the Highlight Pro Skydiving Team, visit www.highlightskydiving.com. The website includes a link to the team’s YouTube channel, which features video of their spectacular demos. 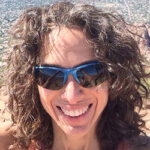 Nancy has made more than 10,000 jumps and has participated in multiple vertical world records, including the women's head-down and upright world records. She grew up in skydiving at Skydive Orange in Virginia and is now based at Skydive Arizona, where she is a freefly load organizer.