Do you think you’re BULLETPROOF?

You could analyse the physical actions of the individual. For example, a sharp front riser manoeuvre in one direction followed by an immediate hard toggle action in the opposite direction led to line twists at low altitude, causing the jumper to lose control of the wing and impact heavily.

Another approach is to examine the state of mind of the individual leading up to the accident. If you did then you might be able to classify them into five types of people…

These people tend not to listen to their peers that have recognisable authority and defy all common sense suggested to them. Such people are not necessarily stupid, they just don’t like to be told that their actions may be stupid. These people tend to be very stubborn and need to be reminded regularly to take a long hard look at their actions.

Impulsive people have a tendency to get charged up by spur of the moment thoughts. They don’t take the time to consider the possibilities, nor consider the consequences of their choice of actions. “I can swoop past that cameraman that I spotted moments ago”. “I just saw someone swoop downwind past the hangar. I’ll give it a go too.”

Invulnerable people are otherwise known as being bullet proof. For reasons unbeknown to common man, some people believe that they can dodge bullets ‘Matrix’ style, where in reality they are have a large red target painted on their chest. ‘Invulnerable’ people are probably more vulnerable than everyone else because they are too caught up in where they want to go rather than where they are actually going. They tend to be interested in getting to their destination quickly rather than enjoying the journey along the way.

Resignation leads to devastation. After committing yourself to any particular style of landing, the jumper begins to travel on the recovery arc towards the destination point. Suddenly the image of what they believed was happening rapidly becomes disbelief and they resign yourself to giving up and do nothing. If you want to have an accident, then the simplest thing to do is nothing.

Of course there are antidotes to these problems….

Love the one you’re with

John Leblanc’s advice for everyone about their choice of parachute, is to compare it with a good marriage… “Love the one you’re with”. Spend at the very least, a year on each type and size of canopy, to give the opportunity to experience a whole range of conditions and seasons. After which they will hopefully decide to spend some more time exploring its dynamics.

Some jumpers say that they are conservative pilots and consider themselves as safe because all they do is the same style of approach, regardless of conditions or circumstances. Brian Germain refers to these pilots as ‘one trick ponies’. An informed pilot learns to understand and then realise that there is often more than one method to achieve the same outcome. For example, you might only know how to do a straight-in approach. Though you could learn how to do a double front riser approach or even a deep-braked approach all performed in a straight-in manner. Both styles of approaches obviously require knowledge, instruction and the development of skill. Yet many pilots choose not to seek the knowledge needed to perform new tricks. Don’t be a ‘One Trick Pilot’. 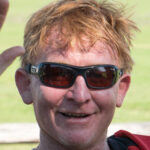 I have been skydiving for 30 years and have 19,000+ jumps. Australian Canopy Piloting team member since 2003. Multiple Australian Canopy Piloting Champion. Aussie Big Way CRW Record Holder. Have been actively teaching AFF, RW, FF and CP for 26 years. Chief Instructor of the Newcastle Sport Parachute Club (Est. 1960). Passionate about maintaining a safe, fun culture of learning the easy way by passing on the knowledge and skills required to keep it that way. Proud to be sponsored by #UPT, #NZAerosports, #Cookie, #DownwardTrendRigging