This last week has been a great one to round out a fantastic year!

We completed the record on the first official day of the record attempts. It shows the quality of the load, the organisers & support team that we completed two out of three attempts at this formation in a single day.

A third point was within our grasp but with inclement weather coming in & over 100 crw dogs gathered flying in multiple groups, we moved on to the camp’s secondary goal – working to build the large formation experience of the wider group by rotating in jumpers to fly five single point 65-way jumps.

These were the largest formations flown since the 100-way world record in 2007. They included two stunning sunset jumps with our formations flying fast into the dying light – almost everyone who attended made it onto one of these jumps.

I’d like to shout out to Max Holmes, Andrew Draminski & Joe Thompson, who did a great job supporting the event and piloting 16-way groups alongside the larger formations. Also to Sean Paquette for being a great lock-up and the rest of the Canadians in our commonwealth quadrant for showing us how it’s done.

A big thank you to Chris Gay and Brian Pangburn for organising a safety-conscious, fun event. Also to Sarah Clark Bromley and Crystal Gray Hoffman for coordinating us and helping everything to run smoothly on the ground. Finally to Florida Skydiving Center who were fantastic hosts and really bent over backwards to support us!

We made a lot of new friendships and built on old ones. More than ten years into my skydiving adventure, and it’s continuing to offer new, beautiful and exciting experiences. I’m very grateful to have had the journey we’ve been on.

For those interested it sounds like there will be more opportunities to fly these formations – and bigger – in the coming years. Now is a good time to be training and getting yourself noticed! 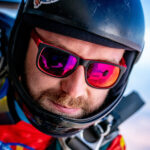