Let’s all look after each other, especially in this crazy world…

I’ve got some super scary stories for you…

A few years ago, I remember being at a well-known dropzone in California participating on an early 4-way training camp in the late 90s. I was boarding their Twin Otter and a skydiver was late. He was a cameraman for another group and moments later he finally arrived running up the stairs, last on. He’d forgotten something vital…

… unbelievably he was not wearing his RIG and he hadn’t noticed! None of his group had detected the unimaginable and it was only the diligent eyes someone from my team who discovered this.

Now here is a tragic reality. In 1988 cameraman Ivan Lester McGuire did the same thing, boarded without a rig. No-one spotted it. Ivan was the last one out to jump from a Twin Beech aircraft and the inevitable happened, he died.

What makes this so believable is the amount of time we spend in aircraft mock-ups without rigs on, compared to with rigs on. But it is the ultimate example of complacency.

The potential carnage continues with this story from Andrew Hilton, a long-time skydiver and British Skydiving Rigger Examiner…

“Once at Skydive Hibaldstow, the bus for a load came back to the centre as someone had forgotten their goggles, they dived out of the bus, grabbed their goggles and tried to get back on the bus. In those 10 seconds, I had noticed that the skydiver’s chest strap was misrouted and challenged them to see if they had been gear checked. The jumper and his gear checker were both on that bus and obviously both had missed the misrouted chest strap (and missing goggles too). I wonder whether they would ever have noticed if they hadn’t had to bring the bus back for goggles, or if I hadn’t been walking by at the time.

“I have noticed misrouted chest straps multiple times, including several on big-ways in the aircraft, where the jumpers should have had the experience to at least gear themselves up, but were obviously focussed on other things and distracted.”

That incredible story is possibly the worst incident where someone got away with a likely fatal incident. But the list of other near-misses and lesser incidents are all around, these are all real examples of gear problems spotted in in the aircraft…

The list goes on. But what do all these things have in common?

All these potential accidents could easily have been spotted and prevented by anyone else on the airplane.

Whilst the community of skydiving as a whole has taken plenty of continuous leaps and strides forward in world of safety, there is still one area where we could all do better – it’s checking each other. This is more than the customary flight line check we are taught in our basic training. It’s being sat on a bus or the aircraft cabin and looking at everyone else’s kit, it’s a case of having open eyes and being constantly vigilant.

Perhaps this is a result of the ‘nanny state’ mentality, where we put our trust in the system, the dropzone, the instructors, the jump master; rather than taking our own and shared responsibility to look after each other?

When I teach rock climbing, the first lesson I impart as an instructor, is that of my own fallibility; I can make mistakes. Prior to every climb, the idea is to check each other’s harness and knot are donned / tied correctly. Back in the late 90s at my local climbing wall, a young guy fell from the top of a route after not checking his knot correctly. He had reached the top of the route successfully, then weighted the rope. He dropped around 12 meters and broke both his legs, but fortunately, he survived.

In a world where we are in a hurry to pack, jump, repeat, do back-to-backs all whilst looking cool, it is the ‘community check’ that could make the difference between life and death.

So here’s an idea for a check that takes 10 seconds per person and would eliminate many of the worst mistakes before they can happen. Let’s choose to deliberately look at someone else not in your own group and do the following eyeball checks from a distance:

Do you have Community Eyes?

Check these mock scenarios below (images by Simon Brentford). Can you spot all ten problems?…

I absolutely guarantee, if we all passively checked out just one other person not in your group on each load, someone somewhere would be saved every year. Especially in this Covid-19-crazy world, let’s look after each other in our community! 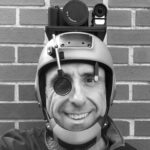