Stefania Martinengo is launching an unique online artistic skydiving competition aimed at letting performers fully express their creativity, and even have a say in deciding the winner…

Stefania, Why Sky on Stage?

I wanted to create a platform where flyers and teams could express and share their creativity. Something alternative to common competitions and easier to access. I wanted to focus on the free routine’s aspect rather than the compulsories.

I felt that it was a pity that fewer and fewer teams have been competing in the artistic disciplines lately, so I started brainstorming on how to inspire flyers to get together in teams and create some beautiful choreographies to share and show, in an easier way.

I felt there were a few issues that were limiting teams to compete:

So, I had this idea of an online contest based on one Free Round only, with everything up to the choice of the team. With this format, teams are able to focus only on creativity. This is not to replace the format we have in the more traditional competitions; it is complementary. It is good to have the technical aspects and compulsory rounds in traditional competition. This is just a different concept. The idea to involve also professional athletes/artists who are not skydivers is to understand the perspectives of non-jumpers. What do they actually see and appreciate the most? I thought would be fun and interesting to explore.

How will the competition work, what are the rules?

How is the judging going to work?

There are 2 different panels of judges. One Panel is the ES-Panel – Experienced Skydivers; the competitors themselves (each team member has a right to vote in the contest they entered) plus a few outside invited judges selected among knowledgeable skydivers– mainly former competitors and professional cameraflyers.

A second Panel, the NES-Panel – Non-Experienced Skydivers; professionals in other sports or arts.

There are 3 judging steps

If there are more than 20 teams in one contest, there will be a pre-selection of the 20 best teams to be judged by the Panel of judges. Teams that did not make the cut will be put into an intermediate category and will have their own separate ranking.

The 20 teams that made the first cut will be viewed and judged by the ES-Panel. This is composed by the competitors in the contest plus a few invited judges. They will view all 20 video routines and send their placement based on which one is their favorite choreography, second best, third and so on till 10th place. They do not have to give a numerical value, just a ranking.

By compiling the results we find find the ES-Panel overall ranking.

The 10 Best as chosen by the ES-Panel will be then viewed by the second panel of judges, the Non-Experienced skydivers. Each judge sends their favorite placements; best choreography, second, third and so on. The overall winners of each contest will be then decided by combining the results from the ES-Panel and the one from the NES-panel

So it’s a bit of an experiment ;-).  We’ll see where it goes, but this way we’ll be able to compare the 3 rankings; from professional skydivers, from the competitors themselves and from non-skydivers. It will be interesting to see if they correspond. The best team, the true winner of the contests, in the end will be the one that impresses all of the judging teams not just one of them!

Why did you decide on a ranking system rather than awarding a score for each routine?

The idea of not having scores as in a traditional competition system comes from my personal experiences as a competitor and as a judge. As human beings, judges do not give the same exact value to numbers when they judge. What for one judge is a 7, might correspond to an 8 for another judge or even a 9 for another. The ranges of the votes vary a lot from judge to judge. This fact tends to distort the final results depending on the judges in the panels. This is understandable, for it is hard to allocate a number to a creative performance.

On the other hand, everyone is able to say: ‘I liked this choreography the most, this one just a bit less’. No matter what the reasons are, it’s easier to decide a ranking than to decide if a choreography deserves a 10 a 7 or a 5 compared to another. I didn’t want the judges to focus on a number and I wanted to make the evaluation easier.

Why I do not want a technical score and why I want to have a truly FREE routine with no guidelines on what gets more or less points is exactly because I wanted it to be truly free. In traditional competitions you know that if you have pointed toes you score more points, or if you do a Cele move you score higher than if you do a simple daffy. Many times, because of those rules teams end up performing not what they truly would like to showcase, but what they think will give them the highest score. In the end that makes competitors tend to just try difficult sequences of moves, while sometimes is more beautiful to watch a creative move even if it’s not so hard. The technical score can restrict creativity. Not necessarily but it may do. This way, by not having a difficulty value, everyone is truly free to show the choreography they truly want to create.

Have you tried a similar system before to decide the winners?

I already used this evaluation system in the last Space Games and it worked wonderfully. The numerical fix value given to first, second, third, to find the winners out of the individual rankings is a proven statistical method used since long time. For sure it’s not perfect but to me better than the alternative.

How much does it cost to enter?

So, you’re in it for the money then 😉… How do teams register?

Teams register here: https://www.skyonstage.com/play-the-game/. 12 October 2020 is the closing date to register and teams will have to download their contest jump by 1 December. Teams can start to create their choreography jump even before registering.

Any final thoughts or comments?

I am totally aware that ART cannot be truly judged as it depends on personal likes and dislikes; one’s own interpretation. Though we can say there is a general sense of beauty; harmony; emotional power; and rhythm that most agree on. I hope that the teams will compete with an open heart, not really pretending that the choreographies that win are necessarily the absolute best, but simply as the ones that have been appreciated the most in that specific moment by the majority.

Again, these games are here just as a place and an opportunity to show creativity and inspire skydivers. The contest is just a fun game to give a goal in the process of exploring one’s creativity and learn new skills. Nothing more but nothing less.

For futher info or to register: www.skyonstage.com. 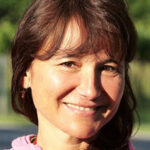 Stefania has dreamt about flying since she was about 5 years old, a recurrent dream, her favorite one.
She started skydiving in 1989 and quickly fell in love with Freestyle and Skydance, being inspired by ‘From Wings Came Flight’ movie, produced by Norman Kent, filming Deanna Kent and Mike Michigan, the father and mother of Freestyle and Skydancing. She started training and competing and the results started to appear. She is a Freefly and Freestyle Italian champion multiple times, Freestyle World Champion, World Air Games Champion and World Games Champion, to name just a few of her accomplishments. She also qualified as an Italian and FAI judge.