The message simply read: “15ish years ago you caught my chest strap undone on the way up. Thx.”

Why am I posting this?

Because over the years I have caught dozens of mis-routed chest straps, 3-ring set-ups, RSLs and a few opened (or partially opened) main and reserve containers.. Usually (not always!) the person was thankful and the situation was quickly remedied.

One of the scariest jumps of my life

On one terrifying skydive a team-mate exited the plane with a mis-routed chest strap which was one of the scariest jumps of my life – watching while they threaded their chest strap in freefall before an uneventful deployment. This story was written up in Parachutist and I had many jumpers, some VERY experienced, tell me after reading the story that they had seen the same or had it happen to themselves.

I’m not a better gear inspector than you. Obviously I’ve missed gear problems I should have caught. But I’ve caught some, and that’s what counts.

You can do this as well. ALWAYS look out for others, and more importantly – look out for YOURSELF! Each of these many instances could have been self-caught by gear checks before putting on gear, before getting on the airplane, and before exiting.

Be YOUR keeper and keep an eye out for your sisters and brothers and let’s keep skydiving SAFELY! 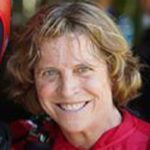