“C. You should decide upon and take approriate actions by a predetermined altitude:

However, defining “hard deck” is a bit trickier. It can have a number of meanings, depending on the situation in which it is used, and its usage has changed over the years. At its core, though, “hard deck” simply means a crucial altitude. The confusion comes in because there are many different kinds of hard decks. Understanding the meaning of the term as it’s being used requires context. You have to ask yourself “hard deck for what?”

The term originated with fighter pilots. “Hard deck” was slang for an altitude (10,000 feet or so) that represented ground level during flight training exercises. If you went below the hard deck, you had hypothetically crashed and were out of the exercise.

At some point skydivers adopted the term, but it had a different application. Prior to 2002, the Skydiving Emergencies section of the SIM recommended two altitudes: one for deciding on and initiating emergency procedures and one for having executed those procedures. Jumpers began calling these altitudes the “Decision altitude” and the “Hard deck”, although neither term appeared verbatim in the SIM. In 2002, USPA removed the secondary (“hard deck”) altitude from the SIM, in part to acknowledge that emergencies vary and may require different responses at different altitudes. The “decide and take appropriate action” altitude was the sole altitude recommendation that remained.

However, just because the hard-deck altitude was gone from the SIM didn’t mean jumpers stopped using the term. They simply began using it in different contexts. And the SIM didn’t stop recommending altitudes for certain procedures. One example is found “Off-Field Landings” in SIM Section 5-1: “A jumper attempting to return from a long distance should keep alternatives in mind along the way and begin an approach into a clear area by 1,000 feet.” In this context, the SIM is providing a hard deck for deciding upon a landing area and starting the approach: It’s 1,000 feet.

One-thousand feet is a recurring theme.

In an emergency, although a jumper should decide and act by their decision altitude, they do not actually lose the option of cutting away until about 1,000 feet, since they still have enough altitude for the reserve to deploy fully. You lose your option to cut away at or below your hard deck; the only handle you have the option to pull is your reserve, to get more fabric out to slow your descent.

Adding to the confusion is that USPA rating courses use the term “hard deck” but in a completely different context. For example, in the Accelerated Freefall Rating Course, an instructor candidate must deploy the evaluator (playing the student) by 4,000 feet or receive an automatic score of unsatisfactory on that jump. That same candidate must also track away and have their pilot chute out by 2,500 feet. So, in these contexts, the hard deck for deploying the evaluator’s canopy is 4,000 feet and the hard deck for deploying their own canopy is 2,500 feet.

The bottom line is that your decision altitude is very simply the altitude at which you must decide and act during an emergency. Can your decision altitude also be your hard deck? Yes, but it is simply the hard deck for deciding and acting. However, that’s not the only hard deck in skydiving. Hard decks are simply the altitude above which an action must occur or below which an action must not occur. The term only has meaning in context, so if you’re ever confused, don’t forget to ask, “Hard deck for what?”

Note: This article originally appeared in the July 2020 issue of Parachutist, the official publication of the U.S. Parachute Association, and also on their website here. It is reprinted here with permission. 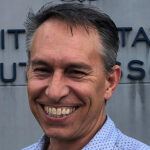 Ron Bell, D-26863, has been USPA Director of Safety and Training since October 2018. With more than 20 years in the sport and 12,750 jumps, he is a USPA Coach Examiner, Tandem and AFF Instructor Examiner and PRO, and is an FAA Senior Rigger.
He spends his time in the skydiving community trying to make the next generation of skydivers smarter and safer than those who have come before.