Over 50% of my jumps nowadays start with a hop ‘n’ pop. It wasn’t always that way, in fact in a previous existence I was relatively well known as someone who would spend at least 40 seconds in free fall prior to even thinking about opening.

I started jumping before AFF and Tandem were even invented and was therefore used to low altitude jumps, that doesn’t mean that I was good at them… My first few free falls  – 3 second delays from 2,800 feet – were awful and scary. I opened unstable once with my foot wrapped in the lines of my round canopy. It was only when a kind soul put me on 10 second delays and I had a chance to really work out what free fall was all about, that it started to make sense.

I’m guessing that is the problem; panic and a lack of true understanding and practise of what we need to do when we leave the plane and have to pull soon after exit.

I understand, we are way closer to the ground than normal and our perception is that we have less time to deal with everything. Wrong, you have more time than usual. Think about it, if you’re doing a hop ‘n’ pop from 5,000 feet, you start accelerating at 32 feet per second, so in 5 seconds you have travelled just over 400 feet, that puts you at 4,600ft. On a normal jump from 13,500 feet, as you pass through 5,000 feet you’re travelling at terminal velocity, so after 4 seconds you will be closer to 4,000 feet. That’s the science but that only goes part way to addressing the problem of why many people are unstable on exit and pull in various attitudes, some of which can give them a malfunction.

Here are some reasons for doing a hop ‘n’ pop

1. After AFF to get the license

Understand the science and calm yourself down, remind yourself you have more time than usual. Practise the exit that you are going to do at full altitude, and from the mock-up, a few times. Take a few breaths before and during exit and look at the aircraft as you leave.

In the case of a fast and low exit, just get through the door as smoothly as possible and do your best to present to the relative wind as you leave, if you have time, work on stability before pulling, if not PULL.

The above two are not necessarily your choice, the rest are, so really learn how to do them properly and start to enjoy them. See a good exit as a vital skill that will increase your enjoyment of the jump, give you more control and save heaps of time.

As above but really work on the exit, this is your choice to do a hop ‘n’ pop , you are going to do a few of them so you can really see some progress and have someone film your exits.

As per number one but this is your choice, as you could ride the aircraft down (but why would you when you get another chance to fly your parachute!).

(in my experience it’s usually raining)

Getting out of the aircraft stable should be one of the first skills that we learn in our sport, here are a few different ways to do it:

On all of the above you should be looking back at the aircraft as the tendency is to look down and this will definitely mess with your exit and stability.

If you are planning a pass full of hop ‘n’ pops, take the time to work out everyone’s wing loading and from that the exit order with the highest loading first… although take note, if someone has a poor or delayed opening that could shift you out of sequence, plan to get back into sequence or maintain the new order. Also, we all fly our parachutes differently, so after the first jump you may need to re-order. Don’t forget ground speed and exit separation!

The type of aircraft has more to do with what you are used to than the aircraft itself, for example, if you have only ever jumped a Cessna 206 and suddenly have to leave a Skyvan, this can seem intimidating and vice-versa. First of all, practise on the ground from the mock up with someone that knows, then if you have the opportunity, practise the exit at altitude in order to build confidence (get someone to video you).

Timing, how long to delay for?

You should at least move away from the turbulence that is created by the aircraft. 2-3 seconds be fine, then you should feel enough control to pull with stability and have sufficient speed for the pilot chute to work. I recommend 5 – 10 seconds for most occasions – when you have sufficient altitude, less can work just fine but be ready for a slower more staged deployment. It’s counter intuitive but a 5-second delay will see you under an open canopy faster than a 2-second delay as you have more airspeed for deployment.

Altitude (relative air density) will have an effect on the efficiency of your pilot chute and your opening, so if you are doing a high-pull, let’s say over 8,000 feet, consider taking at least 6-10 seconds of delay.

If you are pulling whilst still in an upright position after exit, be aware that things are happening [deployment] ‘behind you’ relative to the horizon but in the correct place for the relative wind.

If you throw out your pilot chute and end up towing it for some time, maintain stability/symmetry, slightly break at the hips and gently look over your shoulder to see if you have a malfunction. If not be patient, you may have pulled too quickly or have an incorrect or poorly maintained pilot chute BUT be ready to initiate emergency procedures with the correct timing and sequence.

Unstable on exit? Stay focussed and aware of the relative wind, fly to a stable position without kicking and waving (if possible) and then pull. If you reach pull altitude and are still unstable… PULL!

Take a breath prior to exit and watch the aircraft as you leave.

A hop ‘n’ pop is an intense burst of free fall prior to canopy flight, I still relish that pre-exit moment and the joy of hitting the relative wind in control. 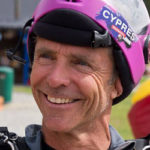 Pete is proud to be sponsored by UPT, PD, Cookie, Cypres, L&B and Sonic Flywear