How to land safely, anywhere, any time…

It’s been a long period of no jumping for most of us, possibly with a good several months having passed since your last skydive. What should you be reminding yourself of before you come face to face with your canopy again?

You’re uncurrent – be honest – are you nervous about your first landing after such a long break? Many people are after a certain amount of time on the ground. So it seems like the perfect time to revisit The Landing Priorities (LPs) that you were introduced to during AFF but may not have revisited since. Why are the LPs so important? If we follow these priorities in order, we have the greatest chance of a successful and safe landing.

1. Land with the wing level

If the wing is level then it is flying in a straight line horizontal to the ground, and you are no longer descending. That is a good thing! We have both a vertical and horizontal component to our canopy flight, and we want to eliminate the vertical component on landing at the very least. It is far easier to slide/run/walk off a landing consisting of horizontal speed only, than it is to stick a landing still involving some aspect of vertical descent.

We want to avoid obstacles and hazards of course. The key to achieving this is planning and anticipation. If you do turn onto your final leg and encounter a potential hazard, make any needed adjustment as early as possible. If you make the adjustment sooner, the degree of turn required to steer away from the hazard will be smaller, and your canopy will have more time to recover and return to a level wing before landing. Busting LP1 with a low turn to achieve LP2 can still lead to injury.

3. Flare symmetrically to at least half brakes

4. Land into the wind

Yes, indeed this is a priority, but it is not the top priority. LP4 can make a stand up landing easier, as flying into a headwind reduces our ground speed. BUT landing into wind is not a requirement to land safely: you should never put this priority ahead of LP1, 2 and 3. Don’t make a low turn just to attempt to land into wind. You are far less likely to injure yourself if you execute a downwind or crosswind landing well with a good strong symmetrical flare, than if you land into wind while the canopy is still rolling, and therefore not level above your head. Remember it is the vertical descent that we are trying to stop. Only turn into wind if you have enough altitude for the canopy to fully recover to a level wing before it is time to execute a flare for landing.

If the last point I make, about accepting a downwind or crosswind landing rather than turning low into wind, makes your heart start racing a little, or gives you a slightly sick feeling in your stomach, then you need to address your landing skills and boost your confidence to a level where you can make decisions that respect the Landing Priorities – these four points in this order are the key to keeping safe and remaining injury free from the most critical part of your canopy flight – your landing. 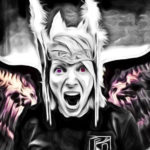 Maxine Tate is a badass British skydiver, based in Deland from 2010. She is a Professional Canopy Coach @Flight-1, a Pro Canopy Piloting Competitor (among other disciplines), Speed skydiving competitor, member of the Highlight Pro Skydiving Demo Team and a Load Organizer.