Hey you … Can you define the term “MARD”?

– Do you know what it does?

– and what distinguishes it from similar systems?

If you answered ‘No’ to any of these questions, you’re not alone!

As it turns out, jumper knowledge of MARD systems is surprisingly marginal. (Or should we say, MARDginal?!)

Let’s start with the basics

MARD stands for Main-Assisted Reserve Deployment. It is a type of reserve static line (RSL) that uses the cutaway main canopy to assist in the extraction of the reserve parachute. To make simple sense of exactly how that works, imagine a standard main deployment: you pull your main deployment handle to extract your pilot chute, your pilot chute inflates and then pulls the closing pin and extracts the main deployment bag from your container. From a physics standpoint, if your main pilot chute was larger, it would create greater drag and therefore extract the main bag more quickly.

Here is a video showing how the Skyhook MARD works…

How much quicker is a MARD deployment?

This leads to the question of exactly how much more quickly a MARD gets the reserve out of the container compared to a standard reserve pilot chute. United Parachute Technologies, maker of the well-known Skyhook, states that the Skyhook should deploy the reserve canopy in 0.5 seconds, which is four to five times faster than a pilot chute alone. Overall, you can expect a MARD to save about 100 feet of altitude over a traditional RSL depending on a number of variables such as the speed of the malfunction, size of the main canopy, type of reserve canopy, air density and other factors.

Don’t take this to mean that you should lower your decision altitude. Your pull altitude and your final decision altitude should remain the same, and you should always pull both handles. If you are below 1,000 feet, you should still go straight to your reserve and get more nylon over your head. However, you should be aware that there have been cases in which a MARD hindered reserve deployment when the jumper pulled the reserve ripcord while still attached to the main parachute. In these cases, the reserve pilot chute launched but did not have enough drag to disconnect the MARD and pull the reserve from the container.

When your MARD disconnects, in most cases it is not because a rigger assembled it incorrectly. All harness-and-container manufacturers designed their MARDs to disconnect or get bypassed by the reserve pilot chute, which allows the reserve pilot chute to extract the reserve during a total malfunction (no main out) or when the reserve pilot chute gets higher than the main canopy during the deployment process. The force required to break the connection varies by model, so check with your manufacturer to fully understand the gear you are jumping. It is also possible, though unlikely, for your MARD to disconnect prematurely. Again, using a MARD may provide you with extra altitude during a malfunction, but you should not rely on it!

What’s the Difference between a MARD and an RSL?

A MARD is a type of RSL (Reserve Static Line), or more specifically, a supplement to a standard RSL that allows for quicker reserve extraction. An RSL pulls your reserve pin after you release your main canopy and is likely to deploy your reserve pilot chute more quickly than you could by pulling your reserve handle yourself.  (Although you should still pull your handle!) When using a traditional RSL, once the reserve pin is out, the jumper is no longer connected to the main canopy. When the main disconnects, the jumper goes back into freefall as the reserve deploys. This differs from a MARD system, which maintains a connection between the jumper and the cutaway main until the reserve leaves the freebag.

Bonus! Because of maintaining a connection between the main canopy and the reserve freebag, it makes it a lot easier to find all your gear in a cutaway because it stays together!

Since a MARD is an integrated part of an RSL, you would disconnect it in the same circumstances that you would a traditional RSL: when you don’t want an immediate reserve deployment after a cutaway.  It is surprising how many jumpers don’t know that if they disconnect their RSLs, they are also disconnecting their MARDs. Remember: If you disconnect your RSL, you have disabled your MARD and it will not speed up your deployment when you pull your emergency handles.

Just as with a traditional RSL, there are very few circumstances in which it is not safer to leave a MARD attached. Canopy formation skydivers usually disconnect their RSLs/MARDs to prevent their reserves from firing when they are in close proximity to other jumpers (such as during a wrap or entanglement). For the same reason, jumpers who are flying high-performance canopies in a flock may opt to disconnect their RSLs/MARDs. For most other jumpers, years of accident reports support the use of an RSL or MARD in just about every situation.

Some jumpers argue that high-performance canopy pilots should not use RSLs/MARDS because immediate reserve deployment after cutting away from a violently spinning canopy may result in the reserve spinning. However, reports show that the use of an RSL/MARD would have prevented many fatal accidents in which the jumper cut away but did not deploy the reserve in time or at all. In some of those instances, the jumper may have been disoriented or unable to deploy the reserve due to being in a violent spin. Conversely, when jumpers cut away from rapidly spinning main canopies equipped with MARDs, they generally have clean reserve deployments or line twists that they are able to clear. There is only one recorded fatality in which a MARD-deployed reserve that the jumper loaded very heavily opened with uneven risers and line twists.

A MARD by Any Other Name

Jumpers often use the name Skyhook generically to refer to a MARD. But just as Kleenex is the trademarked name of a brand of facial tissue, Skyhook is the trademarked name of a brand of MARD. The Skyhook, developed by Bill Booth and United Parachute Technologies, is the original MARD system, and has been licensed for use in a number of other container systems. However, since the introduction of the Skyhook, many manufacturers have developed their own, unique MARDs that they market under brand names.

Some of these are:

Understanding the basics of what a MARD is and how it works will increase your gear knowledge and consequently your safety while skydiving. It can save you in an emergency, though you should never rely on it to do so. Ask your rig manufacturer for details about your particular MARD system and how it works. 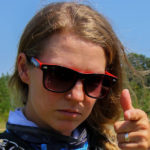 Riley Marshall handles all things marketing for UPT. When she is not jumping a Vector, convincing people to buy Vectors, she likes to ski, rock climb, paraglide, speed fly, speed ride... pretty much whatever you throw in front of her. Oh, and also drink wine!