A Slice of Paradise!

World class organizers, landing on the beach every jump in a stunning location, top notch hotel. It was the perfect holiday

How many boogies can claim that the president of the host country gives them a shout out on his/her social media page?

The Tsunami Skydivers Exotic Boogie, “Party on the Playa 2022” held at Barcelo Resort on Tambor Bay in Costa Rica from 12 – 20 February 2022 did just that. Costa Rican President, Carlos Alvarado Quesada, praised the event on his official twitter account staying (skydiving) “activities position our country as an ideal place for extreme sports, and drive the local economy” (translated from Spanish). Event organizers, Rich Grimm and David Clark, and the 192 skydivers from 14 different countries couldn’t agree more.

Rich imposed strict mask rules for all participants on top of Costa Rican requirements to be fully vaccinated to allow everyone to have fun and stay healthy. Jump planes included a Super Caravan from Maxim Aviation and a Twin Otter from Skydive Chicago that combined for a total of 194 loads over 7 jump days for 2,952 jumps all landing on the beach right in front of the packing area and pool. The Tambor airport is only a 1-minute ride away from the resort, which facilitates simple logistics to get jumpers to the planes.

Rich and his team set out to make an enjoyable vacation for every skydiver and participant. Rich’s 17 years experience in organizing boogies in exotic locations, with a major emphasis on safety, ensures everyone will get a lot of jumps, exposure to the local culture, jump with friends, and make many new friends.

The load organizers made every effort to give everyone who wanted to jump with them the opportunity to do so. Aerodyne graciously set up a tent and let people demo gear, as well as provide many great giveaways. Immediately after the boogie, the International Skydiving Museum and Hall of Fame announced its 2022 inductees, two of whom were load organizers (Amy Chmelecki and Eliana Rodriguez). Given the other Hall of Fame members that supported this boogie (Tom Sanders, Bruno Brokken) as well as the certain future inductees that helped load organize, it was quipped that Rich may need to change the name to the “Hall of Fame Boogie!”

Rich always asks every participant to bring school supplies to donate to the local schools. This trip there was a huge outpouring of support and an impressive collection of supplies collected. He organized a demo jump on 16 February 2022 into an area of Tambor where all school kids and their parents could come and watch the skydivers land. Media promoting the event nationwide showed up for a ceremony to hand over the supplies, which left the school principal speechless and thankful.

The kids loved seeing the parachutes open, soar through the sky, and softly land in the field next to the beach. Rich organized 200 pizzas and drink coupons for everyone to use at a couple local businesses to help celebrate the day, the boogie, and several birthdays coincidental with the day. Needless to say, it was a great feeling to jump into the community, donate supplies to help the local schools, and see the smiles and wide eyes of wonderment on every kid’s face.

Each day, manifest would open at 8:30 am, load organizers would start getting their groups together, ask the lovely Rhonda Kaletz for a slot on a load, and planes would be up by 9am. The DZ “Sheriffs” (Patrick “Higgy” Higgins and Mark Ehrmantraut) would monitor the openings and landings to ensure everyone landed safely.

The resort constantly had snacks and beverages available in the large palapa we used as manifest and a staging area during the night, before it would turn into the steak house dinner each night. People would usually jump anywhere from 2-4 jumps per day, typically stop around 5 pm, then jump into the pool and swim up to the bar to get a beverage and watch the last loads land on the beach.

The (in?)famous “no-jumpsuit-board-short-grippers” Mad John (John Dobleman) not only helped load organize relative work jumps for the people not wishing to sweat buckets, but he also led the nightly swimming pool sessions of “who wants to be a cunning linguist” and poker sessions after dinner each night. The final champion was awarded the prized bracelet on Friday night, and he displayed it to everyone’s envy all day Saturday.

However, the entertainment highlight of the week was on Thursday night when Anna and the Tsunamis (Anna Moxnes signing, Bruno Brokken on keyboards, Regan Tetlow on tambourine, singing, and emcee, and guest guitarists Andy Malchiodi and David Dow) performed a rocking set with the local house band to everyone’s delight.

Rich wrapped up the event with a farewell dinner on Saturday night including a traditional Costa Rican dance performance and cuisine. The event was a huge success with no major injuries, only one cutaway, one semi-water landing, and only one case of confirmed COVID. All the participants cherished the opportunity to start doing more ‘normal’ things again, see and jump with their friends, and make many new friendships that will last a lifetime. 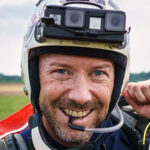 Casey Pruett (USPA D-37244) is an American, living in Germany, and mostly jumps in Belgium at Skydive Flanders or in Spain at Skydive Empuriabrava. He has been jumping for 11 years and loves aerial photography to capture moments to share with others. He also loves flying a wingsuit, attending exotic boogies, and making new skydiving friends wherever he goes.