First hand account of an incomparable adventure in the Himalayas…

In November 2019 the annual Everest Skydive Expedition took place, high up in the Himalayan mountains. An international group of crew and clients flew from Kathmandu to the famous airfield in Lukla and trekked its way up the valley and up a mountainside for 4 days, reaching the dropzone at Syangboche at 12.402 ft MSL, where jumps were to take place in front of mighty mountains such as Lhotse, Nuptse, Ama Dablam and of course Mount Everest, the highest mountain in the world.

Due to the altitude and low pressure, acclimatization days were needed under way for safety to avoid altitude sickness. The group had an amazing trek up, all helping each other, cheering and having a good time.

On the fourth and fifth day, the jumps were briefed, both for clients and for the new crew members. The briefing consisted of information about the oxygen system, the climb and exit, flying and landing the larger canopies which were a mix of PD Silhouettes and Navigators (200-280 sq.ft)  in the very thin air, and alternative landing areas.  After this, the traditional buddhist ceremony called “Puja” was done by a monk and a Lama. The ceremony is a ritual where the monks ask the holy mountains for permission and blessings of the operation, our gear and the people. Branches of juniper are burned, and the monks offer rice and wine to the spirits. Afterwards milk tea and cookies are offered to everyone.

Jumps were done out of an Airbus helicopters AS350 B3, lifting 3-4 people plus a pilot up to an exit altitude of 25,000 ft. Oxygen systems from Topout Aero were used from take off and during the whole climb and jump.

During the first week in the mountains, two clients did 2 jumps each. One of them, Osama Najaf, became the first disabled person to solo skydive at Everest!

Week two saw 2 tandems doing 1 jump each. One guy even had his first ever jump as a tandem here. Later same week 2 more solo jumpers did two jumps each.

Jumping at Everest is an experience like no other. Wearing the oxygen system is itself an experience. During the climb to altitude, you can see the world’s largest and tallest mountains, with massive glaciers, a big river, the Nepalese villages, and even see all the way into Tibet on the other side of Everest. If there ever was a jump that makes you realize how small we as humans are, and how big Mother Nature is, this is the one. Even for someone who has trekked many times in the same area, and have seen true, huge wilderness for months on end, this view is beyond comparison.

But the best part is standing on the skid of the helicopter, looking over at mount Everest from the same altitude, and then let go. The thin air makes you accelerate much faster than usual. Terminal velocity is around 380 km/h, and as you get lower and the air becomes more dense, you actually slow down.

Looking down, the landing area is not easy to spot. An old derelict airstrip is the dropzone, and consists mostly of yellow weed looking exactly like the surroundings. Only here, the rocks and large stones have been mostly removed, making it the best place to land. Overshooting the landing area is not an option, as the end of the runway leads to a sheer drop of around 3,000 ft, down to the river below.

Underway to the landing area and during the stay at the dropzone, the team and clients stayed at tea houses, primitive but very comfortable houses run mostly by families as hosts, with individual rooms for each member, and a big community dining room. Showers are “optional” as in usually cold and not very tempting. Food is delicious all throughout! But most of all, Nepal is amazing because of its people. The team had several locals working as guides and porters. And they are just as much members of the team as the skydivers and clients. You will have to look very far to find a more friendly and kind people than the Nepali.

All in all the team and its clients did 24 jumps this year, with three being tandems. An amazing expedition, with good people, amazing views and jumps, and memories for a lifetime.

For the expedition, almost a ton of gear was flown in, mostly from the US. Organizing such an undertaking takes skills and oversight, and was incredible to watch.

After the Everest Skydive Expedition, most of the crew from Everest met up with additional people forming the crew for this year’s ‘Pokhara Skydive’ – a tandem dropzone operating in the lowlands of Nepal, at the foot of the Annapurna mountain range, in a valley at Pokhara, Nepal’s second largest city.

The jump craft stayed the same: The trusted AS350 B3 helicopter. With an elevation of around 5,000 ft MSL, weather, temperature and air density is like a normal skydive, only the views are stunning here too. Farmland, valleys with hills covered in forests, and the mountains further away.

The team made an amazing effort, doing 147 loads in 5 days despite a couple of days with difficult weather. Everyone worked together, packing, gearing up tandems and taking good care of each other and the clients.

The mostly Indian tandem clients provided the last piece of the puzzle, that all came together into a week of great skydives, fun and good times as one big family.

Everest Skydive Expedition and Pokhara Skydive wish to thank our sponsors United Parachute Technologies, Performance Designs and Vigil Aerospace for working with us, providing the best gear for the job! 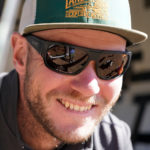 Kim Bo is a Danish skydiver with over 8000 jumps.
He's a Tandem instrutor, AFF instructir and ST&A. His home DZ is Dropzone Denmark.