How fast am I flying?

Like everyone else I get my cues from visuals, noise, feeling and body position. But how good am I really at knowing my speed? The hero in me says I’m fine; reality says otherwise.

The more I jump, the less I seem to know, and last year I gave myself a scare by flying too slowly. In certain situations I’m quite good at convincing myself that I have enough speed… just to get over that ridgeline or pass the notch or whatever. A quick look at The List and you’ll see I’m not the only one who does this. The problem is that even though we train this stuff, we are not infallible.

So after a lot of procrastinating followed by a lot of work, here is my version of an airspeed indicator for BASE.

It’s not a new idea, but something I’ve thought about for a looooong time…

An LED mounted on my helmet that changes color depending on my speed. Speed is measured by GPS, and normalized for sea level. Because I usually only jump in zero or light wind, the speed given is a rough approximation of indicated airspeed that could be got from a pitot tube.

The LED is angled towards my face and is bright enough to see in direct sunlight. I’ve mounted it just at the periphery of my vision.

The unit also has a removable SD card which holds a configuration file and stores log files.

So… there are only really three speeds I’m interested in:

How it looks with my (very rough) polar curve…

Below is footage from one of my test flights in Jan this year – pretty much my favourite jump in NZ, Shark’s Tooth. The jump begins with a transport to the entry point for the line. There’s a ridge-line you can cross to enter the line higher, which I’ve done in the past. But now I got a red light from the Monkey and so bailed to enter the line lower and safer…

Thresholds for each color can be changed. The full range of colors are…

However not all colors need be used, so for example I’ve got it set like this for myself…

Maybe I’m stupid, but I’ve found having minimal colors is more useful as I can process the info more automatically while everything is going on. Flashing red means danger, that’s simple enough for me.

The speed thresholds are set in a text file on the SD card, which can be easily edited.

Jumps are logged to the SD card automatically. 10 data points per second by default. Logging only starts once I’m moving and stops at the landing. What happens while I’m standing at the exit is that it continually buffers 2 seconds of data, so that once it detects I’m in freefall it can go back and write that buffer to the log. So the jump is logged completely from push to landing, and nothing more. The log file is compatible with the Flysight viewer.

True airspeed is your actual speed through the air. In zero wind this is the same as the total 3D speed given by a GPS.

We stall at a particular indicated airspeed regardless of altitude, so this is the measurement we want to know while flying. Speed Monkey takes GPS total speed, makes the assumption there is little or no wind, and using the altitude and a simple algorithm, converts it to indicated airspeed. The result is a little rough because atmospheric pressure and density are variable. More info here.

It won’t work well if there’s much wind, because GPS total speed will deviate from true airspeed.

The 3D speed of the GPS is logged as well as the indicated speed and the LED color. So I can use the log file to fine tune the speed thresholds where I think my best glide is.

This is not a Flysight. Flysight is a genius tool for training flying performance. This is for safety, it helps me avoid making some stupid mistakes.

I don’t use Flysight audio for BASE because I find it distracting. When everything is happening fast I prefer instant access to information using a visual indicator rather than audio.

This is my fourth prototype. It’s been way more work than I expected, but I’m stoked with how it’s turning out. Version one was the size of a small brick on my helmet. Version 4 is 5x5cm and 2cm thick. It needs more field testing, and by more people.

It would be nice to incorporate the antenna inside the box. I found it was affecting the accuracy, and I don’t know much about RF so for now it’s outside.

The next step would be to design a printed circuit board. It’s a big step (for me at any rate), and I need to see what sort of interest there is for this first.

François Gouy gave me the idea years ago by hooking up LED’s to a pitot tube (mounted on a wind vane on his helmet).

Michael Cooper set the bar with Flysight and opened my mind to what can be done with a GPS.

Where to from here

At this point it’s nothing more than an idea, a personal project, and a prototype. If anyone wants to build one I can itemize the hardware components and make my code available. If there is strong interest I can work on getting a PCB done, but there’s always going to be some amount of manual assembly in building the LED ‘finger’. I welcome any comments/ suggestions/ criticism. Cheers! 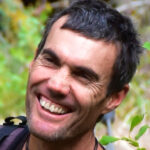 BASE jumper, climber, and sweater of the small stuff. For the past 10 years David has been doing back to back summers BASE jumping in New Zealand and Europe (apart from 2020 arrrrgh!). He loves any kind of flying... wingsuiting, skydiving, hang gliding, paragliding, gliding it doesn't matter as long as it’s airborne! He loves being in the mountains, and has climbed rock forever. But above all, he values friendships made through jumping and climbing, and those special moments spent with friends outside the comfort zone.