In Senior: Microclim8, the defending champions, took on Chimeros (top 4way teams Chimera and Eros joined together) and Jacked, a variation of team Groomed who competed at the 2019 World Cup in Arizona.

In Inters, 2 teams battled it out for gold: KG8 and Flat Earth Disproval Society – both competing as enthusiastic scratch teams, some individuals in their first ever 8way competition!

It had been a difficult year of training for Microclim8 with several injuries and line-up changes and the disappointment of not being able to attend the World Champs in Russia, due to Covid. In the end; superstar alternate Phil Hartree swapped his camera wings for his FS suit and re-joined the team in a new slot – tail; Dennis Parker returned to the line-up in a new slot – rear diver; and Simon Brentford once again flew camera for the team, having also been drafted in back in 2019 on short notice too! Although the team had around 100 jumps this year, less than 20 were with the Nationals line-up.

Chimeros is made up of 4way teams Chimera and Eros – both top 4way teams in the UK who can fly impressively high averages! The plan had been to train hard all year for 4way and then squeeze in some 8way training before the competition. Unfortunately, bad weather meant they only managed 4 training jumps (and with an alternate), so Chimeros would be refining their 8way exits and shapes during the competition. No expense was spared on developing the new team logo though!

If you’re wondering: Chimera and Eros cameramen Pete Harries and Craig Hicks took turns of filming the team in competition!

And whatever you do in life, it never hurts to laugh a bit…. When Chimera signed up for a team with Joey Jones, they didn’t expect him to challenge them to finish their beers while walking the next jump…. but when he did, boy did they go for it!

After a full day of zero jumping, followed by another long day of bad weather, the 8way competition finally got started on the second afternoon. Microclim8 got off to a strong start with a 14 in a round 1 versus Chimeros on 11. However, in Round 2, Microclim8 had a collision during a block 16 which led a bit of a pile-up and a lot of lost time halfway through the round! Chimeros had a real opportunity to go ahead here but unfortunately their exit didn’t come off and they also lost a lot of time.

With all the excitement the scores came out very close for 1st place with just 2 points in it at the end of the first day of jumping. Without much opportunity for training, Jacked was essentially a scratch team but made up of strong 8way flyers. Unfortunately, the linked “chunk” exits weren’t working well, but given the funnelled exits, the scores they produced were impressive, with block splits often just as fast, or faster than, the top teams.

Luckily the Sunday weather was much better than the Friday-Saturday and Hibaldstow was able to make quick progress to complete the competition. A great relief given the forecast previously having suggested there might not have been a competition at all! As the day progressed, Microclim8 got into their stride and pulled ahead – eventually winning every round bar round 2, finishing on a 12.3 average. Chimeros produced possibly the highest-ever average for a scratch team in UK history, hitting the often elusive 10 average!

The Intermediate competition was more exciting with two well-matched teams! They tied on several rounds and the lead changed hands throughout the meet. In the end there was just one point in it and for a moment we expected a repeat of the jump-off drama from 4way nationals! Both teams were untrained and really it came down to who could resolve their exit dramas the quickest. KG8 pipped Flat Earth Disproval Society to clinch the gold by one point.

Full scores and team details on the NSL website here

See you next year?

A lot of the the Intermediate 8way team flyers were 4way flyers too and found it surprising just how hard 8way can be, especially the exits. So if you’re reading this now, and haven’t done much 8way before, why not put together an 8way team for 2022 Nationals? Microclim8 are always happy to offer help at the event with the puzzles and secret stuff (block technique). Get a little bit of training booked in, sort those exits out and see what you can win next year! 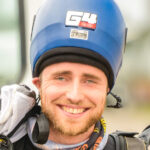