The heat was due in part to the ambient temperature, and in part to the presence of the 38 women who descended upon Skydive Spaceland San Marcos, intent on doing some serious flying.

The group represented 13 states, at least 4 different countries of origin and ranged in age from 20s to 60s. There were women with just a couple hundred jumps, participating in their first record attempt, and world record holders with thousands of jumps and decades of experience. We were there, braving triple-digit temperatures (Fahrenheit), to set a new Women’s State Record, and a Total Break Sequential Record.

Our leadership team also had a wide range of experience. The driving forces behind the event were Helaine Rumaner, who has been organizing for years, and Céline Pelletier, who has plenty of records under her belt as a jumper, but was sitting at the helm for the first time. This was also the first time that our judge, Elizabeth Hoyt-Pitts, would be evaluating a record. Our one-man support team, however, had a world of experience. The incomparable Scott Latinis was there to do everything from serving as the base for practice jumps, to consulting on jump engineering, playing go-fer for Helaine and Céline, checking people in after jumps. Oh, and of course, to provide comic relief with truly terrible dad jokes.

We began on Friday with “warm-up” jumps, a pretty ironic term given that it was 95o F by 10am. We broke into two groups: the 20-way base and the 18-way outside rings. Both groups were flying formation loads, with the base group getting out on one pass, and the 18-way getting out on the next. Both groups built well, and things were looking promising until the weather gods started acting up.

Although the forecast was for clear skies, what had been a thin layer of gauze on the first load had built into honest-to-goodness clouds by load two. The base group went out on the first pass; the 18-way got ready for their turn. But after the floaters (including yours truly) climbed out twice, and twice got unceremoniously hauled back in by our chest-straps, it was clear it wasn’t going to happen. We closed the door and fastened our seatbelts for what turned out to be a pretty bumpy ride down.

After a brief weather hold, and another round of cloud-dodging, we were finally jumping again. We were able to get in three more jumps before the end of the day; all went smoothly. The record seemed to be in our sights.

On Saturday, we started our 38-way jumps, going to 16.5K’. It was a long day. There were weather holds which pushed back loads, scorching heat and humidity you could scoop with a spoon. Although there was a lot of good flying going on, and we got incredibly close several times, we couldn’t quite seem to get it dialed in. By the afternoon, energy was flagging, and people were starting to feel discouraged. After the last jump of the day was again aborted by clouds, frustration was running a little high.

Fortunately, we had company in the hangar. Dallas Disturbance’s Billy Whitaker and Ron Shipp had organized a 32-way support team; they were there to help keep the planes flying and our energy high. The encouragement, support, and love coming from the “guys’ team” (which included two ‘gals’) all weekend was absolutely invaluable. And the barbecue that they put on for us Saturday night helped recharge our spirits as well as our bodies.

Before calling it quits for the day on Saturday, we had dirt dived what was supposed to be the second point for the sequential. On Sunday morning, at 7:30am, on a 30-minute call, Helaine and Céline decided to throw us a bit of a curveball. They announced that we were going to do the second point as the first point, and that we were going to have two more women join us, making it a 40-way. And also, rather than waiting until we were ready to get the sequential to make things official, we were going to be going for the one-point FS record on that jump.

Apparently we work well under pressure, because after all the last-minute changes, we went up and nailed that sucker. Although we were all pretty confident that we’d gotten it, there was, of course, no celebrating until Liz judged it as officially complete. For the Big Reveal, the organizers had us assume our positions in the dirtdive.

We all took grips.

Céline looked around at us, stonefaced, totally channeling Kate Cooper-Jensen. “Are you sure they’re the right ones?” she challenged.

“BECAUSE THAT’S WHAT WE DID IN THE AIR!” announced Helaine.

The room exploded as we burst into cheers, and then received a standing ovation from the guys’ team. A few happy tears may have been shed.

With the record under our belts and pride in our hearts, we went up again to try and get the sequential. Unfortunately, despite great energy and determination – and a medley of classic music on the trail plane, provided by pilot Rabbitt Staib, including the absolutely inspired choice of Wagner’s Ride of the Valkyries – we couldn’t quite pull it off. We did three more solid jumps, including a final jump where we got the first point, completed the total break, and were halfway to building the second point when time ran out.

Although we only got one of the records we hoped for, there was a universal feeling of satisfaction and accomplishment at the end of the event, and it wasn’t just because of the jumping. Women’s records are special for many reasons. Skydiving is a heavily male-dominated sport; only about 13% of jumpers are female. Ladies’ records provide an opportunity for women to connect with other women who find joy and fulfillment in our shared passion. They raise the visibility of females in the sport and, hopefully, attract more women into it. They create an opportunity for newer female skydivers to jump in an environment that is nurturing and supportive to people with less experience.

And finally, there is a sense of camaraderie and team spirit that is very different than on co-ed dives. The pride that we have in ourselves, and in each other, as badass women doing an incredibly cool thing together, is an amazing feeling. With the talent and promise shown at this record, there will be many more events like this to come. 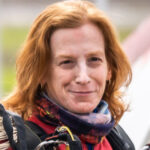 Jessica Bernstein discovered skydiving later in life, starting with a static line jump on her 30th birthday. In the 22 years since then, she has amassed a few thousand jumps, keeping it old school by focusing primarily on belly bigways. She holds several state FS records, and has participated in multiple world record events, including the still-standing Largest All-Female Sequential Formation in 2014. She may be the first person to have skydived after a Reverse Total Shoulder Replacement (definitely one of the first, anyway).