On October 16th – 18th 2019, forty-three Canopy Formation Pilots (known commonly as CRW Dogs) from around the globe ascended on Skydive Perris to commemorate the 100-Way Canopy Formation World Record receiving the Path of Excellence Award and to honor those being inducted into the International Skydiving Hall of Fame.

Many of the CF jumpers invited to participate were on the 100-way back in 2007 which made for an even more memorable event. Over the three-day period, the vision was to complete the largest multi-point/ sequential 43-way CF formation, which would set a new world record.

Jump organizers, Chris Gay and Brian Pangburn, engineered the dive with a goal to achieve four points before having to break down (Starburst) the formation and land safely. Past experience has taught us that the most stable-flying canopy formation is in the shape of a pointed diamond; therefore, the core of the dive was built around a completed diamond configuration.

With the sequential requirement being to move 25 percent of the formation to new grips, the plan was to move the row 6 and row 7 jumpers. In the AM hours of day one, three attempts at a multi-point 43-way were made exiting out of two aircraft, a Skyvan and a Twin Otter, at an altitude of 13,500ft AGL.

With smooth air in our favor, a 2-point 43-way was able to be achieved on the first attempt, resulting in the first world record set in the 2-point largest canopy formation category.  The remaining two attempts were also two-point dives with the group now gaining momentum as we started to mesh and learn to fly together.  This was only the beginning.

As day two dawned, the group of 43 went up again in the calm winds of the early morning.  With the group now settling in and keeping the momentum from our previous day’s achievement, the first jump was a successful 3-point 43-way which now set a world record in the 3-point largest canopy formation category.

With two world records set, we had one more to complete, our four-point dive…  Considering how well the group was starting to fly, we opted to go up an extra 1,000 feet with the use of oxygen to 14,500 AGL to provide an additional minute of working time to complete the formations.  With world-renowned videographers Bruno Broken and Gustavo Cabana filming the action, the fourth point was built and completed seconds before having to break down the formation.

Two onsite judges and a third off-site judge were quick and enthused to notify the group of our accomplishment; the jump was clean and another world record for the largest 4-point sequential CF formation was set.

What a day! What an event!  With three new world records set, CRW Dogs, young and old, have set a new bar for the future of this discipline.  With the sequential record jumps complete, our sights were now set on a night demo jump to be performed for all guests attending the event.

On the night of October 18th, a team of jumpers went up wired with lights and pyro, to light up the sky.  With the city lights gleaming below, a twenty-person formation was built and flown to end what most can describe as a once in a lifetime event.

A big thank you to Skydive Perris and the International Skydiving Hall of Fame for giving the CF community the opportunity to display the beauty that is canopy formation flight. 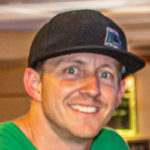