Project 34 – Luigi Cani successfully landed a 34 square foot parachute to set a new world first. James Boole, who flew in a wingsuit with Luigi under his SLeia34, gives us the skinny…

Images and article by James Boole

What are the main risks of jumping tiny parachutes?

The two main risks when using very small parachutes are the descent rate on landing and deployment malfunctions. A malfunction on opening could easily result in a fatality as the rotation speed can cause the jumper to immediately lose consciousness.

In 2004 Chris Martin (RIP) was incapacitated and sadly killed by to the G-forces of a violent spin, caused by a brake fire on deployment.

The high wing loading also makes the canopy very sensitive to turbulence. Hence all the jumps were performed early in the morning when the wind conditions were ideal.

How did Luigi train for this?

The first step began in February 2020 at the Olympic Golf Course, Rio, with a SLeia 43. Luigi kicked off the project by getting current on his normal ‘big’ canopy, a SLeia 64. He also made some jumps wearing a 10kg weight belt, afterwards he felt ready to try the SLeia 43 for the first time. The plan was for Luigi to jump out of a helicopter with the canopy packed in a direct bag, flying the canopy down to 2,000′ before cutting away and deploying his reserve. This would allow him to safely get a feel for the canopy, simulate the landing turn and most importantly measure the descent rate using a Flysight GPS logger.

Luigi felt that a hovering helicopter would give him the most consistent openings. After reaching 6000 feet the pilot signaled the exit, stopping the helicopter in a perfect hover above the golf course. Luigi put his feet on the skid and after passing the direct bag over his head to the ‘bag man’ he pushed off symmetrically holding the risers, extracting the canopy as he dropped away. The team held their breath..

The down draft from the helicopter rotor pushed the canopy downwards before it had chance to inflate, the canopy then proceeded to flip back through the lines and instantly deploy into a flat spin. Luigi was able to quickly cut away and the team breathed a collective sigh of relief. The hover was replaced with a slow run in to provide the canopy with a clean air flow and fortunately this was the only unintentional cut away of the project.

After ten further jumps on the 43 and obtaining the magic “zero” descent rate the team felt confident and Luigi proceeded to make a smooth landing on the 43 at dawn on March 8th 2020.

When was the next step?

The original plan was to continue on with the 34 training as soon as possible but the Covid virus put the project on hold for nearly a year. Eventually, January 2021 saw step 2, the initial training jumps, performed at the DZ47 airfield in Tijucas, Southern Brazil. Luigi got current on his 64 before performing three further landings on the 43. This time the canopy was deployed normally using RDS. The team then returned to the Olympic Golf Course, Rio in preparation for the record attempt.

After 3 further landings on the 43 it was time to try the 34, it was carefully packed into the direct bag. Memories from the first 43 jump returned as the helicopter climbed to altitude. This time the canopy opened perfectly and Luigi flew down 2,000 feet before cutting away as planned. After the second jump Luigi decided to deploy the canopy normally as the additional cutaway harness was affecting his harness inputs. Over the next two days Luigi performed a further five jumps. The data was good and the record attempt could proceed…

As the canopy chord is so short it is difficult to flake, the focus is on clearing the nose, stabilizers, tail and then positioning the slider symmetrically. The canopy was a snug fit in the custom direct bag but super easy to fit in to Luigi’s skydiving rig! (Well, it does pack up to about the size of 2 beer cans!)

In flight the canopy was understandably very sensitive to any pilot input, with flight performance closer to that of a wingsuit than a parachute. The canopy didn’t like being flown slowly and would start to oscillate rapidly on the yaw axis. With practice Luigi learnt to fly smoothly, initiating the turns with the harness, controlling the plane out with the rears before going to toggles.

Tell us about the record jump James

It was ‘Game on’! A small group of spectators made up of Luigi’s friends and sponsors were on site to watch the record attempt. Luigi took off, shadowed by the cine-flex helicopter and within minutes the spectators craned their necks to spot the exit at 6,000 feet. The canopy opened on heading, Luigi stowed his RDS and began the approach, in brakes the canopy twitched nervously.

He started his 270 degree turn at approximately 1,200 feet, dropping out the sky with incredible speed before recovering smoothly and sliding in the landing to the applause of the breathless crowd.

Luigi celebrated with hugs and high fives, he had done it, a new world record! The team felt a tidal wave of emotions as they celebrated – ecstasy, relief, satisfaction, pride, fatigue and thirst!

Just to be sure Luigi landed the canopy a further four times. When asked if it would be possible to land an even smaller parachute, Luigi replied “Yes sure, we can still go a bit smaller. Records are made to be broken.”

Images and article by James Boole 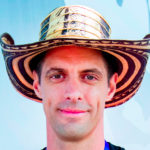 BASE jumps: 2000+
Jumping since 2003 and local at Monte Brento since 2007
Wingsuit pilot, aerial cameraman, rigger, paraglider and drone pilot
General manager of World Wingsuit League
Offers BASE courses and one to one coaching