World Champion Martial Ferré reviews another World Champion’s book – Above All Else by Dan BC. Martial and Dan were rivals and friends, with immense respect for each other…

Symbolic character of formation skydiving, co-founder of the clan Airspeed and multiple world champion, the American Dan Brodsky Chenfeld, alias Dan BC, is not the only person to embody all the glory of our sport. But his unusual story makes him become one of the most charismatic characters of these last two decades in the skydiving world.

We may say that he is not the only one and France is not outdone in this domain! But certain fates distinguish themselves from the others by improbable routes. The route of Dan deserves our special interest because it is so epic…

Dan tells us his story in an autobiographical book, Above All Else, an epic story which begins let’s say as ‘simply’ as ours, by a first jump, from an old Cessna at the age of 18, somewhere in Ohio. Dan tells us his growing passion for the parachuting sport and especially for competition. This passion, a good many of you know it, but it is interesting to see how it expresses itself with the words of a big champion like Dan. However, this story, which starts in a rather commonplace way, transporting us to the intimacy of the skydiving in America of the eighties, turns to a dramatic way during a beautiful morning of 1992 in California.

While the horizon was beginning to clear in Dan’s life, one already well animated by the disorders of a conqueror, everything is going to fall over. April 92, Dan, eternal third place on the podium but always enlivened by an insatiable energy to achieve his quest, takes off with his new team-mates in Perris Valley’s Twin Otter. He has settled in Perris Valley and built the Airmoves team with the firm will to win the American National Championships, to allow him to fight against the invincible French in 4way (the famous Tag-Essonne) at the future World Championships. In this team Airmoves, Dan had recruited a brilliant young person, James Layne, known when he was a child in Ohio in Dan’s former DZ and to whom he had promised that they would become world champions together. The National championships are in 6 months. The team makes marvels during training and improves a lot. Dan feels that his quest is within range…

But in this clear beautiful morning of April 92, the fate decided on it otherwise and the plane, instead of climbing towards the Californian blue sky, crashes to the ground right after take-off at the end of the runaway, killing 16 persons. Among the victims appears James, the cute youngest person of the team, Dan’s ‘little brother’. Dan and his two other team-mates, Tom and Troy (Tube Stoes, Oxygn Helmet and Go Fast, you know? It is him!) are among the survivors. The videoman of the team, Richard Stuart, who stayed on the ground to solve a problem with his camera, will be the powerless witness of the drama. His alternate for this jump appears among the victims. This accident is a tragedy in the skydiving world. Dan is going to stay 6 weeks in a coma with destroyed cervical vertebraes.

It is a new challenge for Dan, but fate nevertheless seems to leave him a small ‘chance’: he is not paralyzed, an enormous fortune regarding the severe trauma and damages to his neck. In his coma, Dan sees himself continuing his freefall, a slow and strangely silent fall that he shares with his little brother James, who seems to slow down his descent. Dan makes a sign to tell him to get down again… It is necessary to them to pursue the quest, to continue the training! In a cheerful and finally happy smile, James makes understand Dan that it is over for him but ask Dan to get down again and find the rest of the team to pursue the quest: “you still have things to be achieved below”.

Dan, in Above All Else, tells us all of this incredible experience, how he goes out of the coma, then how he is going to continue his fight for his quest that he will never give up. This fight is considered lost beforehand by the doctors whom Dan asks, on his bed in hospital, if he will have the chance to jump again one day and who reply to him that he should content himself simply with the happiness of being able to re-walk one day. But try to make somebody understand that for whom jumping and playing to win is what his life is all about!

By reading this fabulous narrative of a true, beautiful and authentic story, we live through the eyes and ears of Dan what could be the life of a conqueror, of the useless, sprinkled with periods of uncertainties, with doubts and with the sacrifices that a sportsman has to make to become a champion. This story, for some parachutists of my generation, we already knew it. But we knew only the facts. Henceforth thanks to this book, we relive these events from the inside. And all the champions, even if they did not live such tragic events, should feel perfectly what he describes in this book. And the commoner will feel all this in the same way, since this book is also, and above all, a lesson of life to all, each reader being able to recognize in this epic drama a little part of his own story maybe.

After reading this book, you will understand what the expression ‘Never give up’ means! The words of Kipling’s famous poem If correspond perfectly to the sense of this story. “If you can see destroyed the work of your life, and without telling a single word rebuild it… “ (sorry this is the French version turned into English, not the real version in words but yes in the idea!)

Enthusiasts about competition and history of sport parachuting as well as the oldest skydivers will find in this book the big tracks of the past of the years 80-90, the authentic facts and the famous names of the world of the skydiving competition that it is good to remember for the witnesses of these times. The youngest generations will be happy to fill the gaps in their culture about the history of skydiving and learn among others how, because of this story, was born the world famous Airspeed team. The readers will learn henceforth that the ‘Air’ of Airspeed results from this famous team Airmoves, victim of such a tragic fate. Moreover, France and its invincible 4way team in the years 80-90 is quoted numerous times there, a team which was the source of inspiration and the ‘leitmotiv’ of Dan!

It is thus with a certain emotion that I read this book and have written this article, since Dan was for me a redoubtable opponent and also a friend for whom I always had a certain admiration, in particular because of his history. All of us knew who was Dan and knew his doggedness to win this fight after numerous years of disappointments and misfortunes; this forced our respect. In early ’94, our first intensive course as young team Maubeuge (the future French national 4way team) brought us on the scene of this incredible story, Perris Valley, and we could still feel the” Airmoves vibes ” and perceive some images of this tragic past. But already at this moment, Dan, who had fully recovered from his accident after so many big efforts and against the odds, still devoted to his unachieved quest, had just left California for Arizona to start his new team, Airspeed, the team which would allow him to achieve his quest and to become a severe problem for invincible French 4 way team … Dan was on his way towards the purpose of his life: to be a world champion!

Thanks Dan to have been such an example for all of us! May your example be a source of inspiration for everybody.

Thank you to Martial Ferré of Veloce.fr for the review

Buy Above All Else here

Main pictures are courtesy of DanBrodsky-Chenfeld.com 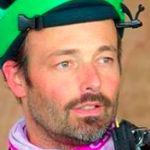 Martial is an elite FS skydiver with many gold medals in European 4 & 8-way Championships and Gold medalist in the 2002 8-way World Cup. He recently won a silver medal at the first indoor 8-way World Meet in 2019 and posted a new indoor world record with his team with a 44 pointer (47-3).
Martial is still competing every year with his different teams at French indoor nationals or US indoor nationals. He is a full time tunnel and skydiving coach working with 8-way teams, organises at outdoor events with P3 as a P3 Captain for big-ways or a Powerplay coach alongside with DanBC, Doug Forth and Craig Girard. He is also running invitational 16-ways events through Europe (Powergames, Klatovy Challenge and Powerflower).
Martial organised the French national record - 104-way.