This is the story of cameraman Will Penny and performer Yohann Aby from the World class skydiving freestyle team Flynamik. How they ended up together, why they fly and what they do in order to reach their goals.

I filmed Flynamik during one week in Empuriabrava in June 2016 after Will Penny and I had a conversation November 2015 when he invited me to join them on a training camp. I don’t think he expected me to actually go this far.

I early in the week told them I would be a pain in the ass to them, sticking my camera in their face at hard and easy moments. It took a while to get them used to it but they got more and more relaxed throughout the week. I filmed them in bathrobes in the morning, coming out of the porta potties at the drop zone, followed them in 30 jumps in the sky but always did my best in trying to stay behind the scenes and allowing their training camp to continue as if I wasn’t there.

What I discovered was something that is maybe not so surprising for a team that are World Champions, World Air Games winner and double World Cup winners. They work very hard. Doubtlessly they are one of the hardest training teams in the world of not only the discipline of freestyle, but the full sport of skydiving. They go the extra miles to reach that tiny bit of improvement that only a handful people in the world will notice.

Thank you Will Penny for inviting me, taking me into your home, opening up to the cameras and staying on top of your game while supporting me in getting a true story about the team.

Thank you Yohann Aby for allowing me to join your training camp and be a distraction while you try to focus. Thank you for skydiving with me and teaching me some really interesting lines to fly on the one day off of your training camp.

Thank you Jonatan Thomasson, the sound post-production technician of this project and my good friend. While having two and a half other jobs, you took it on yourself with huge enthusiasm and great generosity to help me out with trying to fix my poorly recorded audio.

All the music in the movie is used with rights to do so. Thank you very much to the artists that have allowed me to use their creative work to enhance mine. Arcadian Flowers by Trummor & Orgel was a big inspiration for me in the making of this documentary.

Thank you to Nicolas Arnaud, Martin Kristensen and Nils Kløcker Predstrup for allowing me to use their skydiving footage as reference material.

Thank you to Skydive Empuriabrava for supporting me with jumps and pack jobs so that I could film Flynamik 30 times. Other than that I have received no financial support in the making of this production. 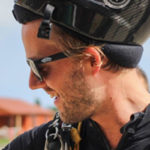 Johannes Bergfors is a body flight teacher, a movie maker, a photographer, an event organiser, an idea injector. He lives to induce a twinkle in your eye - whether the reason is awe, a new understanding or a relationship to something or someone new.

I’m proud and grateful to be supported by the highest quality equipment manufacturers in skydiving. I feel confident when flying knowing their years of experience, attention to detail and quality control.