Meet Mason Corby – skydiving and tunnel coach, who quit ‘the real world’ years ago because he wanted to work in the sport. It seems to have worked out impeccably! Mason was on the World Record head-down 164-way. He won the Extreme Games 4-way Dynamic competition with team Southern Fly, and created ‘Downunder Dynamics’, a coaching event that has lifted the skill level in Aussie freefly! 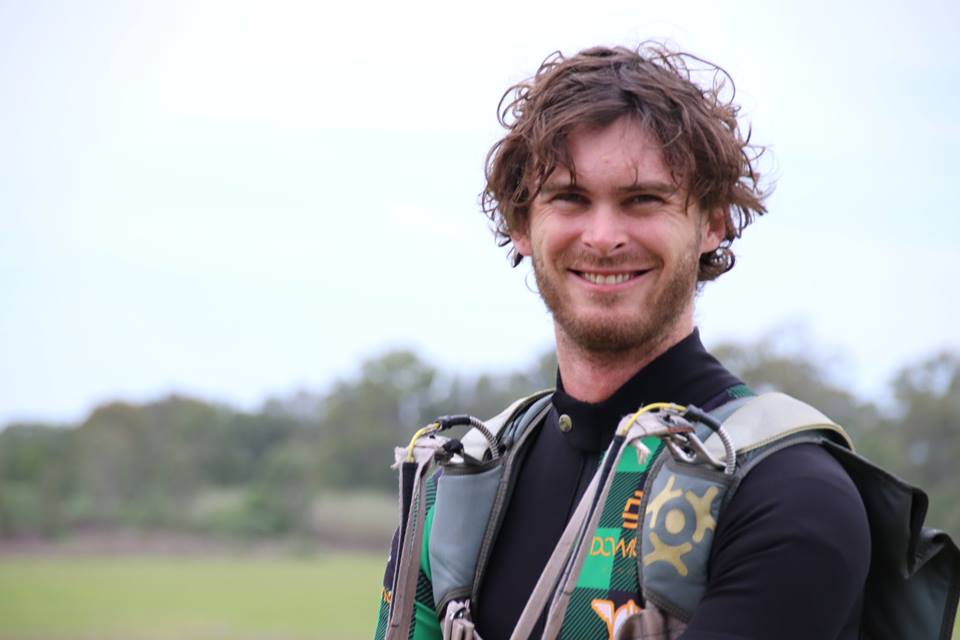 Where are you from? What do you do?

I grew up in the coastal town of Wollongong, Australia. I currently now live in Brisbane with my fiancée. At the moment I travel around Australia and the world as a freelance coach running tunnel and skydiving events with my team mate Keith Grealy as Downunder Dynamics.

How many jumps, what type, how long in the sport?!

Tell us about starting skydiving

I started Skydiving at a small Censna drop zone in QLD Australia called Gatton Skydivers. It was one of the last old school dropys. Gunging was still a thing and we started from static line. On my first free fall jump I had a double mal and smashed in with 2 out. My main was tangled in the reserve. Lucky the main was a 230 otherwise the landing would have been pretty hard as the reserve had started to snivel again. Welcome to skydiving hey. I came back the next weekend and never looked back. I was told that was one of the worst things that could happen in jumping – bar going in – so I liked my chances I guess! 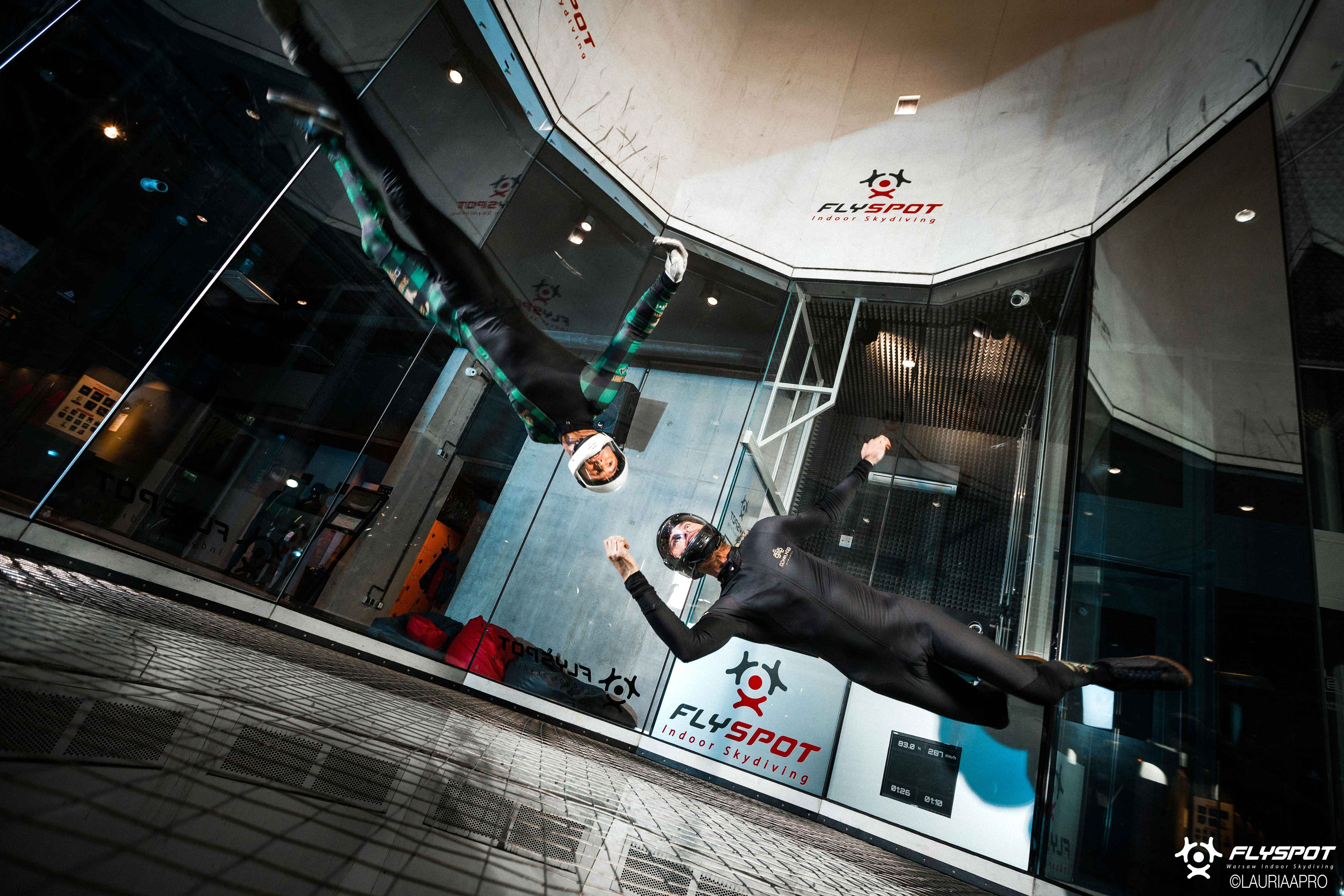 How did you made a name for yourself in Europe as a tunnel instructor and coach?

I wouldn’t say a name, it was probably more the people I surrounded myself with. I came to Europe because I wanted to push my skills and abilities to the next level because the level in Australia wasn’t up there with the rest of the world at that time. Back then we also had no tunnel here. So to do this I wanted to work at what I saw was the best tunnel in the world at the time and surround myself with the best people/flyers.

I was lucky to have a lot of good mentors and one of the best bosses at the time that helped and pushed me a long way. When my team mates and I (Southernfly) weren’t coaching we would be discussing the little things while driving and taking first timers… “Why do they put their leg that way?” … “what causes their mind to tick a certain way?” finding similarities where normally you would just say “straighten your legs.” I think it was the curiosity to find out why they are doing something than to just give the signal you have been told that works.

Generally the tunnel was so full that we couldn’t fly between 6am-3am so we would have to come in at 3am in the morning. Winter was cold especially walking through the snow for kilometres at 3am just to fly. But there was something about hanging at the tunnel during those early hours of the morning that I will never forget. I think it was the dedication of that time and place that a lot of people shared that pushed all those boys to another level.

Why did you go back to Australia?

Home is home. Although I loved Europe and the scene there was awesome I missed the consistent good weather and wanted to sink my teeth into building and pushing the Aussies forward. I missed consistent jumping and Australia is known for having some of the fastest progressing flyers and I wanted to be a part of bringing them up to a world level. Also the food is way better here.

It’s awesome. There are a lot of camps going on and there seems to be a rise in weekend jumping, which is great. For a while people would just attend camps and not really jump on weekend. The skill gap was also quite large, but over the past couple of years this has really started to disappear, which is awesome. I think the camps and tunnel has really paid off. I’m really looking forward to seeing how it progresses over the next years. Something I would love to see though is all those new tunnel instructors getting out there more and putting those fresh skills into the sky. 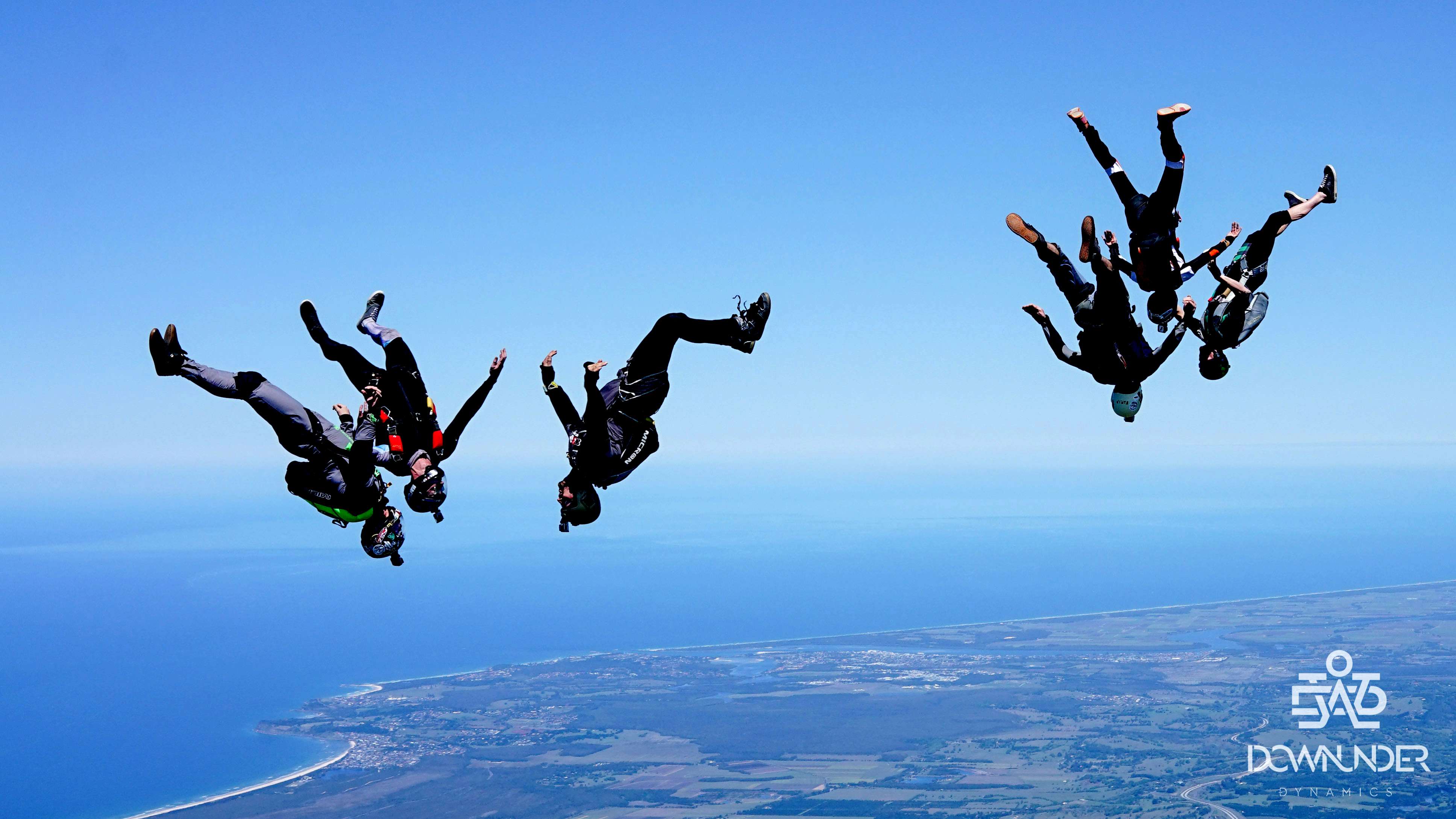 Where did the idea for Downunder Dynamics come from?

I was living in Poland at the time and about to move back to Australia. I wanted to do a camp run purely by Aussies for Aussies to show the rest of the world the level we were all at. Usually people wanted overseas coaches to come to Aus and didn’t believe we had the skill level to pull off a high level camp ourselves. I wanted to prove them wrong.

From there it shifted to more skill-based camps to grow the sport and deliver quality coaching events and I have to give credit to those that came before me. I used ideas from the Nordic meet (Martin Kristensen), Voss free fly festival 2012 (Håvard Flaat) the Fly4Life boys and Flaj Flaj. Those 4 professional events inspired me. They are some of the best events I have ever attended/watched still to this day!

What approach do you take with your coaching?

I like to teach people to teach themselves. A good ability to progress means you understand what you are learning and the stages of progression. If you are solely reliant on the teacher, you will always be reliant and only get so far. If you understand you start teaching yourself. A good teacher makes himself obsolete.

A good teacher makes himself obsolete

Getting deported from Norway and still owing a $6,000 debt to the tunnel for my tunnel instructor course plus more debt for flights and other expenses and nothing to my name, then booking a ticket to move back over to Europe on a one-year working holiday visa to Germany with the “hope” but no guarantee of a job in the tunnel at Bottrop. If I didn’t get it I was going to try and pack shelves at the local supermarket and spend all my money on flying anyway until I got good. Luckily Boris Nebe gave me a job and paid away my debt to Vossvind for the course. Absolute Legend!

Is freeflying art or science?

Both. I think science first and foremost. Then for the creativity of new ideas comes art. But to refine the art, you then again need science. 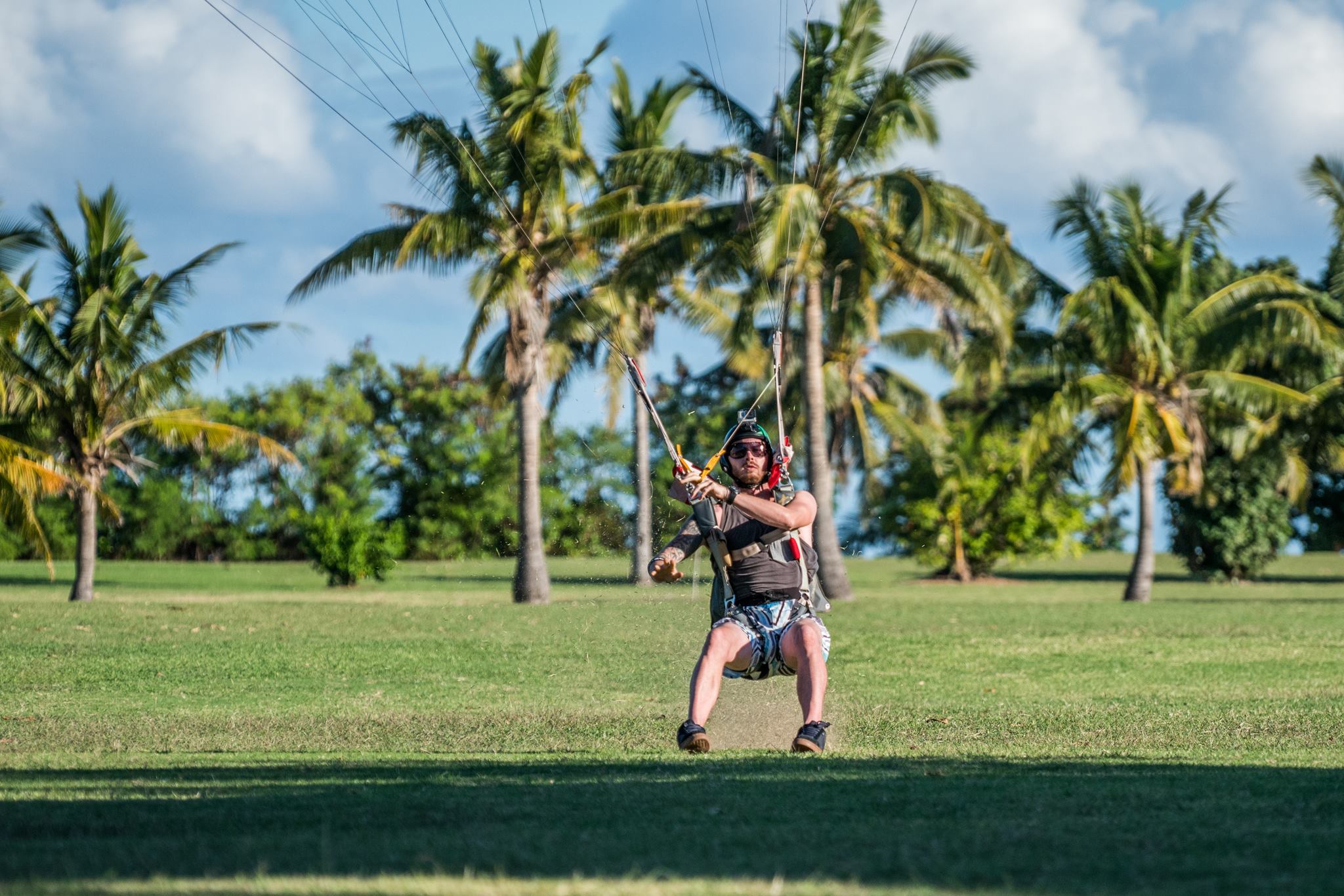 What gear do you fly?

Currently, Deem Flywear for suits, Skyhelmets for the tunnel and Tonfly for the sky, NZ AeroSports Leia 74, Dekunu for an Alti … and Vector 3s containers but we recently switched to Icons.

What’s your favourite piece of gear and why?

I’m really liking the new Dekunus at the moment. Being able to check all the variables on the way up myself really puts my mind at ease when leading movement groups(ground speed, Climb rate, distance to DZ, and so on. Some of the data collection afterwards is really interesting as well. Especially now I’m starting to get into wingsuting too, I jumped it the other day and had all my flight info was right there visible during the jump. I’m really looking forward to seeing how they develop in the future. 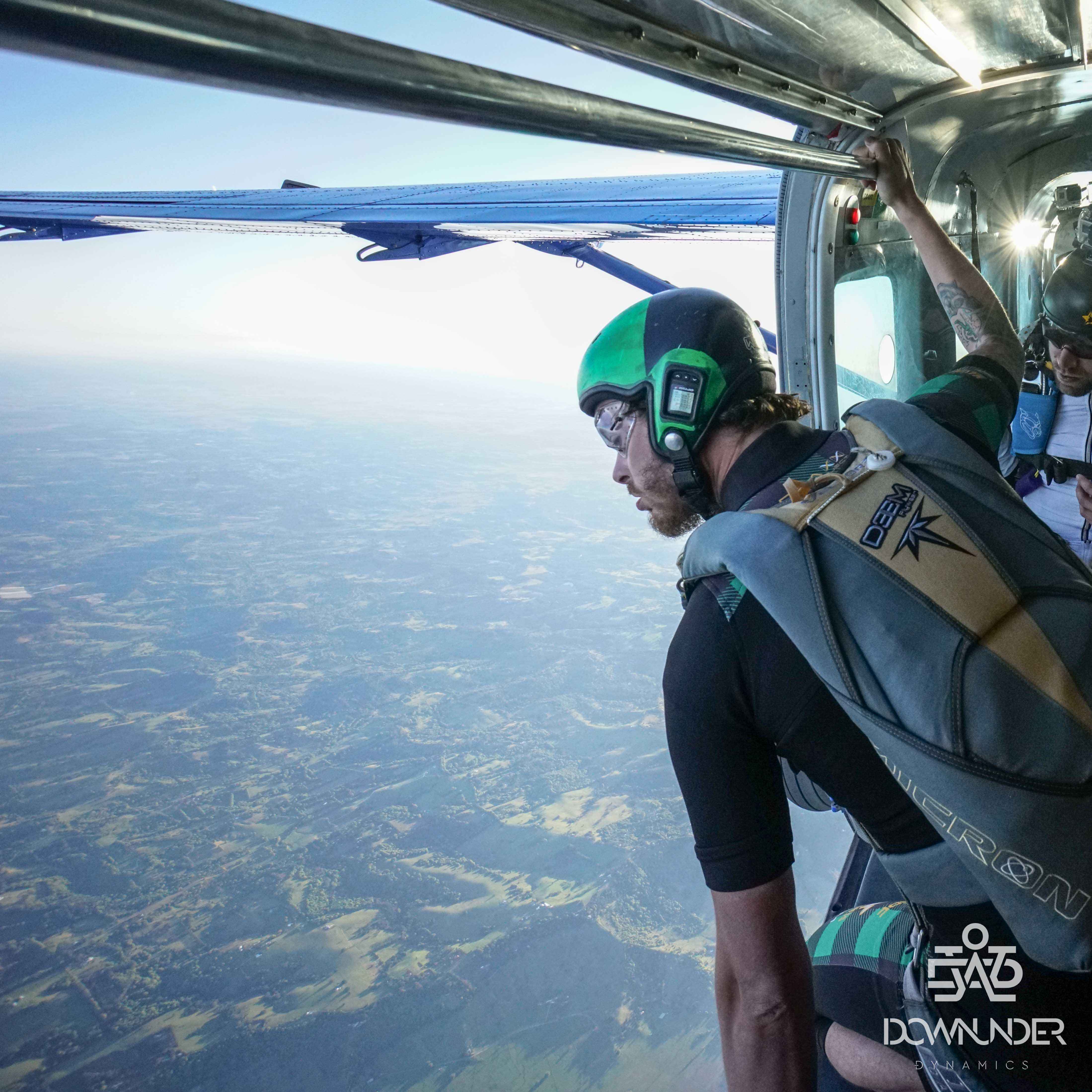 I think the best thing we will see from it is the accountability of people. People who swear black and blue they didn’t go up jump run or they did track off from the group, yet just pulled in place. The 3D visuals you can track on the computer afterwards allows you to see the flight path in a 3D model relative to other jumpers. This is a great safety feature. From a DZSO perspective I think it is even better.

How would your friends describe you, in 5 words or less?

A bit of a weirdo

Who do you look up to/has influenced you?

A bunch of people. Fred and Vince of course for back in the day with skydiving, some of the best jumps I ever did were with them, and they of course are still well pushing it now. Filip Crnjakovic for tunnel along with my teammates from Southernfly. Keith Grealy, Joe Grealy, Mark Medowcroft and Antonio Arias. Also Håvard Flaat for pushing the events and organisational side of things as well as Team Off Track, Criky, Joorge and Pony who kicked me off with my love of freefly. Base would have to be my first mentor Hayden Galvin, he probably got me into more trouble than good but hahaha! And of course my missus for advice and supporting me through it all. 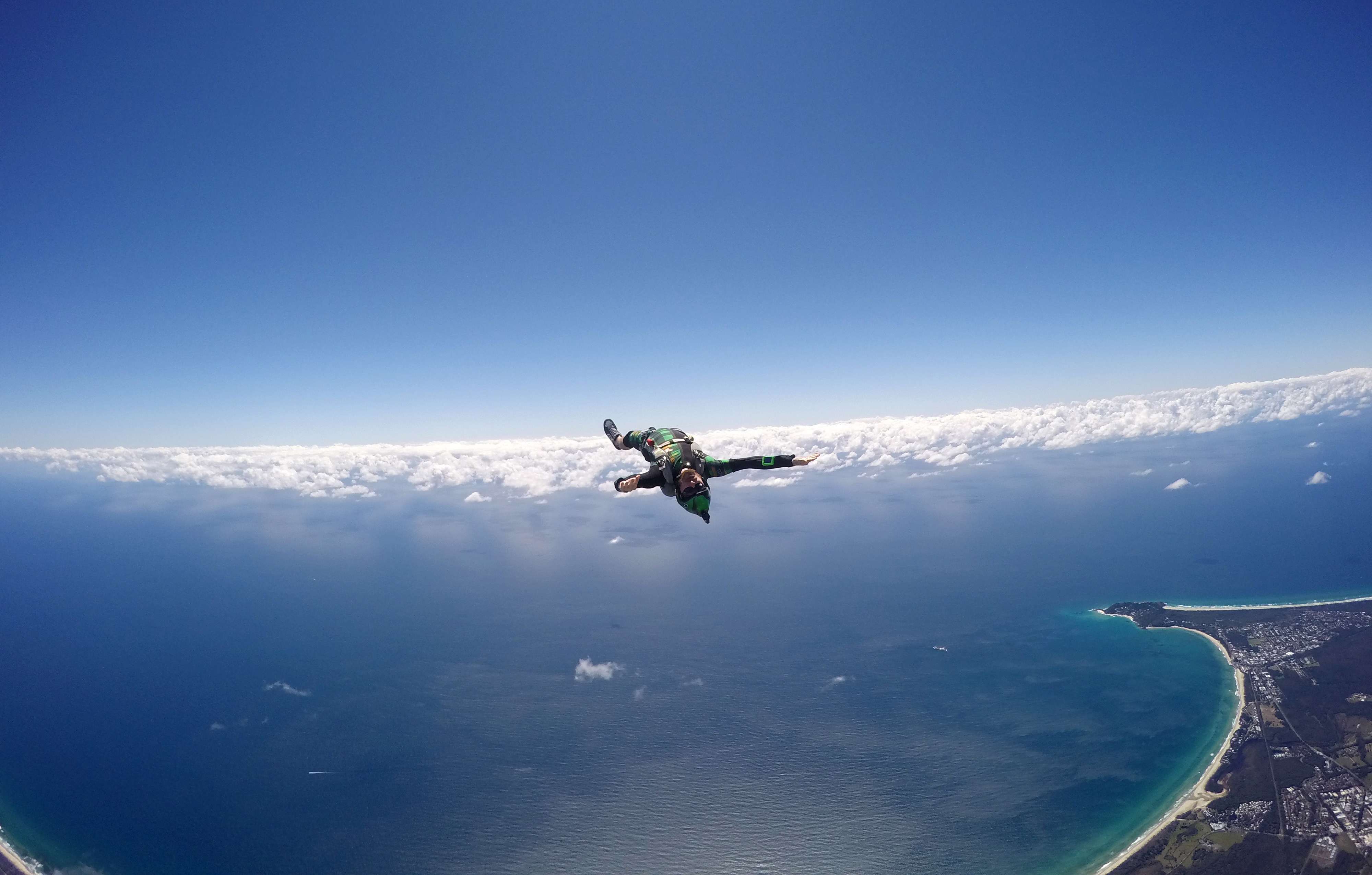 Tell us something we don’t know about you

I can twitch/move most of my muscles individually in my body ie, wiggle each ear individually. I think it could be due to having Tourettes from a young age, giving me a bunch of weird ticks I hide. Good for party tricks too!

What’s the biggest problem we have in the sport right now?

The rate of progression is so quick that we are having many near misses that are being swept under the table or just palmed off. It’s not just tunnel flyers, whom skydivers like to point the finger at. I think it is us as a whole. The sport is progressing at such a rate that we are forgetting the mistakes or missing the mistakes of those that have gone before us.

And what can we do about it?

I think communicating and being comfortable to put your hand up and learn at any stage is a necessary thing we all need to do no matter your level.

What do you think about when you go to sleep at night?

I try not to think.

What’s next for you, what are you most excited about?

Wingsuiting. I’m loving these new suits. I just jumped the Freak the other day and I’m converted.These things are epic. I just really want to test out the stuff I have just converted form the tube into the sky with one of these. It seems we are only on the doorstep of progression again.

Thank you Skydive Mag and the skydive community for allowing me to follow my passion and have a job doing what I love. If it weren’t for the people in this sport and those around me I wouldn’t be able to do what I do.