The intention behind making all these types of turns is the same, namely, to perform a necessary heading change with the smallest amount of altitude loss possible.

Technically speaking, the aim is to achieve the primary effect of yaw (heading change) with minimal roll (bank) and pitch (nose-attitude) change, while controlling any resulting effect (surge). Jumpers need to use turns like these frequently and in many types of situations. We can categorize them into two basic groups based on use: turns used for position and turns used in an emergency.

Flat turns are used in scenarios where the pilot is in a slow-flight configuration and needs to make a heading change. Typical examples would be a jumper who is executing his flight plan and wants to make heading corrections prior to final approach or who is looking for the drop zone or an alternate landing area after a long spot. More advanced pilots use flat turns for slight heading changes during their landing setups. These situations aren’t necessarily emergencies but are situations in which the pilot wants to conserve altitude and slow their systems’ descents for decision-making purposes. Generally, when jumpers make these turns, their systems’ airspeeds are slow, their stress levels are low, and they have time in which to make decisions and act.

NB: With all exercises take note of the Training Space paragraph at the end of this article.

1. Slow the system by pulling down evenly on both toggles, initially to about shoulder height.

2a, Letting up on the toggle that’s opposite from the desired turn direction:

2b Pulling deeper on the toggle on the side of the desired turn direction:

2c, A combination of both (scissor movement):

3. Stop the turn by returning the hands to a symmetrical position (for all techniques).

With parachutes, as with all aircraft, input leads to the system having inertia, so you may need to apply opposite input to regain heading control. Start performing this exercise using small turns (90 degrees), and gradually increase your rotation to a full 360-degree turn over a series of jumps. Finally, note your start and stop altitudes to build up altitude-loss data for your personal system over the series. As you get more advanced, you can also experiment with placing your hands in lower and higher starting positions.

Flat Turns Used In An Emergency

Canopy pilots commonly use emergency flat turns if they have run out of altitude and can no longer safely make heading changes. Examples are pilots who turn onto the final legs of their landing patterns lower than normal or who are avoiding obstacles or other canopies. Here, the pilots are correcting misjudgments or reacting to traffic problems. In a situation such as these, a system’s airspeed and the pilot’s stress level tend to be high, and the pilot’s brain has less time to make decisions. The technique for executing a flat turn is the same in this scenario, but since the pilot has often already initiated some form of input (such as a turn or a dive), he needs to apply opposite input to level out the canopy before initiating a heading change for avoidance. We therefore also practice how to recover from a dive before executing a flat turn:

1. Initiate a turn with a toggle.

2. Immediately apply input to the opposite (second) toggle to flatten the turn while maintaining the bank of the turn.

4. Once the canopy is level, symmetrically and slowly release both toggles back to full flight while limiting the canopy’s surge.

2. During the turn, bring down both toggles to level the wing on your desired heading.

3. Once the canopy is level, symmetrically and slowly release both toggles back to full flight while limiting the canopy’s surge.

Again, start with small turns (90 degrees) and gradually increase your rotation to a full 360-degree turn over a period of jumps. During your repetitions of both exercises, note your start and stop altitudes to build up altitude-loss data for your canopy over the series of jumps.

Dive Recovery Near the Ground

When learning how to recover from a dive, the final piece of the puzzle is to know and practice how to react if the two following scenarios happen close to the ground during the landing.

Although these exercises teach reactions to turns that are close to the ground, jumpers should not practice them while landing. As with the other exercises, jumpers should complete these above the hard deck of 2,000 feet.

Most people understand and have seen people perform turns too low. The pilot’s flare movement has to be fast, aggressive and through the whole range to keep them from hitting the ground, although he has to be careful not to stall the canopy.

2. Bring the second hand down to meet the leading hand as aggressively as possible and continue flaring aggressively through the whole flare range. The canopy attitude should be nose high to the horizon. (You should swing out in front of the nose of the canopy.)

3. Repeat with larger rotations over a series of jumps up to a 360-degree turn.

Fewer people understand the turn that is high enough for the pilot to complete but too low for them to return the system to full flight for a standard approach and landing. Most jumpers know that they cannot raise their hands back up to regain full speed for landing in this scenario. Releasing the flare will cause the pitch of the canopy to change to nose-down and the angle of attack to decrease, move the pilot position back in relation to the wing and cause the airspeed and descent rate to increase – none of which are desirable when a pilot is close to normal flare altitude.

In this case, the pilot must keep flying through the flare and maintain the canopy’s nose attitude to fly horizontal to the ground. The pilot may have a feeling similar to the one he’d have after a high flare: the lift or flare power will feel lower, and the pilot must progressively provide further flare input rather than flare aggressively.

2. Bring the second hand down to meet the leading hand aggressively to level the attitude.

4. Add symmetrical input, progressively maintaining level flight through the complete flare range. The canopy attitude should be nose high to the horizon. (You should swing out in front of the nose of the canopy.)

Jumpers tend to overlook training for minimum altitude loss, especially at the start of their jumping careers. Remember that your canopy has fast and slow performance ranges: you should be comfortable flying in either mode. Repeating these exercises will expand your skill level under canopy in all flight modes, giving you more tools in your toolbox. Most importantly, though, when you do need to perform a turn in an emergency situation or recover from a dive, it will not be the first time, and you will feel confident that you’re reacting in the safest manner possible.

Jumpers should attempt any exercises discussed in this article in clear airspace and should finish those exercises above a hard deck of 2,000 feet. If possible, the jump should be devoted solely to canopy training. Remember, during these exercises — or when flying in any slow-flight configuration — a system (collectively speaking, a jumper and canopy) will be more reactive to input, so jumpers need to be aware of their stall points. (For a discussion of stalls, see USPA Skydiver’s Information Manual Section 6-11 — Advanced Canopy Piloting Topics.) 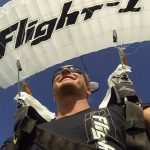 I have been teaching Canopy Piloting professionally since 2004. I have taught widely across Europe in the civilian and military markets. At the start of 2009, I joined Flight-1 and the Performance Designs Factory Team.