Airplane Wingsuit Formation (AWF) is getting increasingly popular among airplane and wingsuit pilots. Skilled pilots and improved wingsuit performance lead to a larger overlap of capabilities and is becoming more and more attractive. It is an awesome feeling for a wingsuiter to fly side-by-side with a much larger object in the skies! And the airplane pilot gets to experience flying with single people equipped with nothing but a bit of fabric and a rig, right next to the cabin door!

Some records in size of flocks have been set in the past and attracted local and global media. With increased wingsuit performance, AWF can not only be seen with older and slower aircraft like Pilatus PC-6, Turbo Finist and DH Beaver, but also with more modern airplanes like, for example the Cessna 208.

In order to make this discipline lasting and enjoyable it might be advisable to follow some recommendations that could even be converted into rules for some drop zones or even countries.

As a precondition, it is vital to have the OK of the drop zone/ safety manager who is also in touch with the aircraft owner, the pilot and the wingsuiters. Generally there is no special NOTAM necessary other than what is needed for normal drop zone / wingsuit operation.

For a properly executed AWF flight with one airplane and one to multiple wingsuiters, these are the core bullet points to discuss and set between the involved parties:

The EXIT takes into account who is giving the “Exit” command (typically the airplane pilot), the number of wingsuiters and the time they need to perform the exit, but also needs to cover what to do if a wingsuiter has a non-successful exit and what the flight plan for this wingsuiter will be.

If the setup involves a RENDEZ-VOUS of airplanes and wingsuiter(s), there needs to be a definition of a holding area and an approach plan, typically lead by a jump-leading wingsuiter followed by the other wingsuiters. A successful rendez-vous is achieved by having bi-directional visual contact between wingsuit lead and airplane pilot. There needs to be a bail out descent plan in case of no successful rendez-vous for both aircraft and wingsuiter(s), allowing for no collision.

The CONFIGURATION defines which wingsuiter is flying at what position in relation to the aircraft and if there are dynamic positions, what they are. The positions and plans are to be executed precisely, so the aircraft pilot knows what is happening around him. Part of this definition is the awareness of difficult or dangerous zones around the aircraft as for example propeller, flaps, instruments, lees and vortices.

There needs to be an exact definition of the FLIGHT PATH, taking into account different fly zones (e.g. glider plane zones, CTRs), hills and other difficult terrain, return paths of unsuccessful wingsuit exits, etc. Typical flight paths are ending at the drop zone, slightly into wind, so wingsuiters with usually larger canopies do not face problems getting back to the drop zone under canopy. Paths can be for example straight-ins, tear drops or figure of eights. Ideally there are no wingsuiters other than the ones involved in the AWF and no high pullers on the same load. If so, the flight plan needs to be adjusted accordingly.

At any time of the flight, there needs to be clear ESCAPE PLANS for both wingsuiters and airplanes that can be executed without visual contact and without risk of collision. Typical escape plans involve wingsuiters decreasing and airplanes picking up altitude in relation to the trajectory.

With a properly calculated flight path comes a definition of SEPARATION between airplane and wingsuiter(s) that is defined by location in relation to the drop zone and by altitude. The airplane will subsequently perform a horizontal flight away from the wingsuiters.

The LANDING phase defines the usually normal landing approach by the airplane and the final separation between wingsuiters and their normal landing procedure. Remember that a successful flight is over only on successful landing of all parties.

Following these recommendations you will optimize the success, safety and fun of your AWF flight and help establish it as a widely accepted discipline.

To current knowledge all the mid air collisions between wingsuiters/ tracksuiters and airplanes (e.g. France 2018, Italy 2020) did not happen on AWF jumps but to the contrary, on non-briefed “normal” jumps. Knowledge about AWF helps to increase overall safety. As a wingsuiter, talk to the airplane pilot about your descent path and plan, regardless if performing AWF or not.

Disclaimer: This is a high level check list of recommendations intended for advanced wingsuiters, pilots and DZOs. It will not spare you the hassle of much training and putting thought into this. Collisions can, as with any skydive, be expensive or even fatal.

The Swiss Wingsuit Team in action

Andy Farrington, aircraft and wingsuit pilot, discusses how to fly the airplane for maximum safety with a wingsuit load. 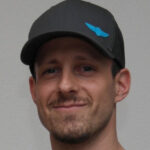 Daniel Ossio (CH) is a cyber security expert, wingsuit instructor, coach and load organizer. He has performed more than 2500 wingsuit jumps and about 20 wingsuit wind tunnel hours and is part of the Display Swiss Wingsuit Team and the Swiss National Wingsuit Performance Team. He has organized an AWF World Record, a German AWF record and other wingsuit and AWF camps in various countries.

He would like to thank squirrel.ws and swissskydive.org for the great support.