Shining results for the record-breaking stars of the night…

For the past four years, a loose confederation of skydivers led by Steve Woodford have met in the late fall at Skydive Arizona in Eloy, Arizona to chase one record or another. Our informal name: Moonlighters.

First it was 2016 with a 40-way night jump. It was an FAI world record, though it wasn’t the most number of jumpers ever at night. In 2017, we went all out and set the ambitious, never-been-even-attempted before, 64 jumpers out of three airplanes, FAI record and largest night formation. We got it on the second try.

With the bigway records set, Steve set his eye on sequentials. Logistically they’re a bit easier to pull off since they require fewer planes and fewer jumpers. (Finding even 22 skilled jumpers willing to go on a bigway night jump can be a challenge!)

So when the Steve Woodford called us for another trip into the night to set a newly minted FAI record category, 22 of us from 9 different countries answered the call.

The challenges for this record attempt were much like any other. It’s a series of problems that need to be solved. The exit is engineered and refined. Slots are changed. And one of the outside people, Latency McLaughlin, even noticed we had a wrong set of grips which was sorted out just before our first record attempt. With sequentials, you can optimize movements to make the grips come quicker and that was engineered by Derek Thomas. All of this led of course by Steve Woodford.

Break-offs are staggered into three waves and deployment altitudes are varied. It’s usually not a great idea to have people opening at different altitudes on bigways, but it’s more important to build some vertical as well as horizontal separation for canopies at night.

Upon opening, we take advantage of the very large open landing area at Skydive Arizona and all turn towards the direction of landing (dictated by cars on the ground pointed in the landing direction). No turns, no patterns, just straight-in approaches.

One of my favorite parts of the night record attempts is not just the night jumps (which are beautiful as they are nerve-wracking) but also the twilight jumps.

We did the twilight jumps as a kind of dress rehearsal. Most of us agreed that it was a good halfway point between day and night jumping. They’re pretty rare jumps, as most drop zones do what they can to get the last load up in time to land before the sun dips below the horizon, and most night jumps are done one hour after sunset to satisfy the D license requirements of night jumps.

We couldn’t ask for better weather. The nights were mostly clear and the moon was bright AF, as the kids say. The days were warm enough (low 80s F/high 20s C) to help keep the night at comfortable cool (one of the previous night records was during a cold snap, I’ll take this weather any day).

The first night was messy, but we set a 2-point 22 way World Record. Boom!

Steve Woodford felt we could do better and we all agreed. However the second night had a number of challenges, and we only matched the first attempt (2 points).

So the third night was our last chance. I think this added to everyone’s anxiety, and it certainly added to mine.

Night jumping is something that can make even the most seasoned jumpers anxious, not to mention a 22-way bigway. But the last jump added performance anxiety as well. The bigger the group, the more people you would potentially disappoint if you didn’t perform. I thought of the words of Alan Shepard, the first American in space: “Don’t f*ck up, Shepard.”

As I left the plane I just hoped things wouldn’t be a mess when I docked. When I docked it was smooth, and it stayed smooth. People flew disciplined and confidently, and there wasn’t the noise or chaos of the first two nights. From my vantage, we did a solid four points, doubling our first and second night’s attempts, and possibly got a fifth point by the skin of our teeth.

But the proof would be in Andrey Veselov’s footage – our video flyer as well as illuminator. Hopefully no one busted a point with the wrong grip or late grip. In particular, I was hoping I hadn’t bust a grip.

The FAI judges were standing by. We had one local judge and two remote judges, and they would look over the photos and video to make sure each grip was complete and correct (we have to declare the formation ahead of time).

While the judges confabbed, all we could do was wait. I got the correct grips. I’m sure of it. I mean, I think I’m sure. Pretty sure. Probably.

Fortunately, it didn’t take long to find out so we didn’t have to stew in our anxiety.   We got it. A 4-point 22 way skydive at night, and a new FAI record.

I’m relatively new to these big-way records, but I’m experienced enough to know what it feels like to go home empty-handed. It’s not fun. Congratulations, hand-shaking, back-slapping, and Russian vodka (brought by Sergey Sergienko) were passed around.

The rest of the night was spent celebrating at the Bent Prop. It was also my 43rd birthday, and that’s a pretty epic way to celebrate.

When the night calls, some of us are compelled to answer. I’m hoping I’ll be on the next one.

The back story, by Organiser Steve Woodford

The many years of petitioning for Night Record FAI status…

“Over the last 30+ years, there have been many “unofficial” Night Records, but none recognized by any National or International Organizations.

“But in 2015, the USPA Competition Committee officially recognized the Night Large Formation Category and the race was on! Soon, the FAI also created the category and we responded with the Night 40-way FAI Record. Not long after, we broke the long standing ( 16 years) unofficial Night 50-way built at Elsinore in 2000, with the current Night 64-way Night Record at Eloy, Arizona.

“Then in Denmark, Carsten Cooper Jensen, using all the knowledge he acquired from the Night 64-way, and the unofficial Night 4 point 18-way also completed at Eloy, designed and set a new FAI Night Large Formation 2-point 17 way Sequential Record. The challenge was on!

“I have always been a fan of the “complete break” concept, which we did do on the Night 4 point 18-way. But we only did 2 points in a row without repeating any grips.

“The FAI established a new rule requiring 3 points consecutively without repeating a single grip. This made the engineering extremely interesting! So to avoid a simple patty-cake sequence, I created a sequence that looked aesthetically pleasing and also challenging.

“Back in the 1980s and early 2000s, it was relatively easy to find the jumpers who were keen to do Night Records. But now, there are so many different disciplines and many jumpers who will not even obtain their “D” Licenses because of the night jump requirement, the pool of experienced and competent jumpers has diminished. Fortunately, I have a group of “regulars” who love Night Large Formations skydives. They return year after year from all over the globe.

“This year, accepting the challenge of the 2-point 17-way was a no-brainer. But to design it as a 22-way to fill the aircraft and plan as many points as possible. Thus a challenge would have to do more points or go to a second aircraft for a larger formation.

“Unfortunately, a Skyvan was not available. This would have provided a quicker first point and thus at least one extra point completed. The answer was to have 9 floaters from the Twin Otter. 6 outside and 3 diving. This put the base much closer to the divers, which was my plan for the Night 64-way Record and resulted in a quicker completion on the divers side.

“A Night Record requires more planning than a day Record. Besides the competing events, boogies and other records, there is the very important issue of the full moon. Not only the full moon, but more importantly the moon rising time. It is no good if the moon only rises at 8pm. The ideal time is about 2pm to 4pm, so that the moon is high enough to provide good illumination. This occurs only once, maybe twice a year. Also, being on or close to a weekend helps for jumpers work schedules. The best time of year for weather is also important. Clear skies and no high winds. Location is an issue. The desert is a great place because of the open area and desert sand reflects the moonlight well.

“This year, the weather, moon and wind Gods and the team combined for perfect conditions to establish the new complete-break 4 Point Night Sequential 22-way World Record!

“Thanks to Sunpath and Hel-Star for the lights and Cypres and Innovative Parachute Technologies for the sponsorships.” 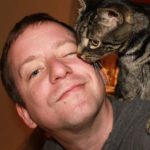 Tony Bourke lives in Portland, Oregon and calls Skydive Oregon his home DZ (with frequent visits to Skydive Perris). He is an FAA senior rigger and AFF instructor with 1,500 or so jumps. He’s run a marathon on every continent and is an expert at Star Trek trivia.