Hook Knives – Why you should carry one and what’s available…

The article covers knives that are commonly used. As a rigger in the US, I see many rigs that come in for reserve repacks and I am quite amazed at the number of rigs that are without knives on containers that are already set up with pockets/snaps on them. The jumper may have lost them or simply ignores the fact that something is missing. It is sad to see jumpers disregard a simple piece of safety equipment.

We often see jumpers carrying knives or see them in skydiving gear stores. So why do we carry them and which ones are the best to have?

Why carry a knife?

Some countries require licensed jumpers to carry knives when jumping. People often carry them without knowing why. There are some ‘exceptional’ circumstances where a knife may help.

There are several examples of these exceptional circumstances actually occurring. When this happens, people re-evaluate their procedures and equipment in response but as time moves on people become lax about carrying knives or forget the reasons they chose to carry them.

The obvious group that carry multiple knives on every jump is the CRW community. This may be because inherently in their chosen discipline the chances of wraps or entanglements are higher than solo canopy flight and the opportunity for actually needing to use a knife is therefore much higher. CRW jumpers carry multiple knives as well in case they drop one or access to one is limited due to the material and lines that may be around them. Theses knives are substantial and very visible.

Other examples where knives may help include

Although these are rare scenarios, having a knife available can make a difference to a positive outcome.

Will your knife cut it?

A while back at a CRW boogie, the organizers set up an evening event where two jumpers in suspended harnesses raced to cut the lines of the other jumper. It sounds like a fun drunken activity but something that those CRW jumpers with big knives should be able to easily achieve.

Unfortunately, very soon after the competition started, it became apparent that the knives they used and had on their gear were not cutting the lines or risers very well, if at all.

After this, a lot of respected CRW dogs went on the hunt for better knives and tested a variety of knives on their abilities to cut an assortment of materials. After testing various materials (lines, webbing, canopy material, etc), the results revealed some much better alternatives. Many jumpers immediately replaced knives, upgrading to ones that would reliably cut lines and material when called upon.

The commonly used knives seen on rigs can be split into 3 distinct types:-

Razor blade type cutters are the most common that you will see on skydiving rigs. They can be small or larger designs, single blade or double blade and are mounted on rigs or jumpsuits. These cutters are commonly supplied by the manufacturer.

However, these are certainly not the best option. Originally small Zack knives were installed – these small orange plastic knives with razor blades. The problem with Zack knives is they were designed for cutting fishing line vs multi-strand braided canopy lines. The plastic was weak and got brittle over time, so broke easily simply removing it from its storage pouch. The blades were weak and trying to cut even a single canopy line would result in the blade edge becoming dull and useless after cutting a single canopy line. If you have a Zack knife I would seriously recommend throwing away and upgrading to a better knife.

Larger designs such as the ‘Jack the Ripper’ use a better type of plastic that is less prone to embrittlement. Sometimes they feature two blades. This design has similar limitations with razor blade type edge folding over and becoming dull very quickly. The two-bladed model can also result in material getting quickly lodged in the V between the two blades which severely limits its cutting ability.

There is a great difference in cutting a single line under tension using a safety cutter and trying to cut through a variety of separate loose lines, webbing and nylon material all jammed together at once. This may require more than a single cut. The larger plastic designs are also able to twist a bit which would compound the problem of material jamming between the blades along with blade edge folding over/dullness.

Later designs have a metal handle rather than plastic, which minimizes twisting. While they are often a single blade design, the problem remains on the blade edges folding/dulling after only one or two cuts. These are certainly better replacements for the small plastic knives but still have some limitations.

The alternative is a Solid blade safety cutter, such as a Benchmade safety cutter. These safety cutter designs are used by military and emergency services to cut webbing straps, seat belts, etc.  They have a small and large design which make them great replacements for the razorblade type designs.

They can be re-sharpened by a professional knife sharpener. The edge is hardened and does not have a tendency to fold over, they are single blade design, meaning no chance of material jamming between multiple blades and they are available in small or large sizes meaning they can be easily made to fit existing pouches.

There are several manufacturers with similar designs, and these proved to be able to cut materials well and repeatedly (although I would not recommend doing this as you want the blade to be sharp when you come to use if for real). The lanyard/snaps can be easily fabricated by your local rigger for fitting in existing pockets.

The last type is an open blade knife – these are rarer but sometimes you will see CRW jumpers using them such as RAF Aircrew knives. These tend to be bigger knives and have hardened blades. The RAF type knives have a squeeze-type mechanism to keep them secure in their pouches. As they are bigger knives, the mounting options also tend to be a bit more limited.

Mounting horizontally on a chest strap is a typical option. This is not something that many jumpers outside of the CRW discipline would consider.

Where do you put it?

This details a variety of knife options available to choose from. But how and where should we mount them?

For some of the smaller knife choices, the rig may have been set up for a hook knife already.

A pocket and snap may already exist on your rig that you just didn’t notice or pay attention to. Typical locations are under a mudflap (on the front of the rig below the 3-ring ) or on a leg pad near the hip junction. These may be convenient but can limit usage to one hand, but we are talking about extreme circumstances and having something is better than having nothing.

Another common mounting location is a small pocket that can be threaded onto the chest strap and allows the knives to be swapped between multiple rigs.

Some of these locations allow the knife to be easily removed with one hand but difficult with the other. But at least it’s permanently mounted on the rig and always there. Other locations like the chest strap can be used by either hand.

The bigger knives tend to be a little bit more limited in mounting options. You can have a horizontal pouch that can be mounted on a chest strap. The pouch may be already set up for this. If it isn’t it’s easy for any rigger to modify. These days you will typically find CRW jumpers often having two, allowing them to extract a knife with either their left or right hand.

Having a big knife mounted vertically often results in a knife that is flopping around on the chest strap. It can become a bit irritating and can hinder its ease of extraction.

The alternative is to mount the pocket on a jumpsuit – better yet you can have your jumpsuit made with the pocket already there. When mounting a pocket on a jumpsuit, it is a good idea to position it when in a suspended harness to ensure that the leg straps under canopy do not make it uncomfortable. Also making sure that you can access it while under the canopy and extract it with ease. This is something that you can practice during hanging harness drills in refresher training or safety day.

However, the limitation of mounting on a jumpsuit means that if you are jumping using different suits – make sure each one has a knife, or you have an alternative chest mount for those shorts and T-shirt jumps you do in the summer.

An additional note is that tandem student harnesses have a knife pouch on them – this is often difficult to access with a lanyard strap tucked down between the instructor and student or simply missing. This should NOT be an instructor’s primary knife when doing tandems. It is possible to access it when everything is going well but when things aren’t it is virtually impossible to reach.  I personally know of two incidents where a knife may have changed the outcome for the better but the instructors were unable to access this knife on the student harness and they did not have one on their jumpsuit. Mounting a pocket on your jumpsuit/swoop shorts in the summer is easy and ensures you have your knife easily available to you on every jump.

Choosing a better knife is good, but don’t make it become the new snag hazard on your equipment or something that risks rubbing or cutting your equipment and damaging it. I’ve seen jumpers take note of having a good knife and buy a good solid knife but mounting it in such a way it has just become a bigger snag hazard. The goal is to have a good knife, easily accessible that doesn’t create more of a hazard.

Knife and pocket photos in this article by Adrian “Spotty” Bowles

Watch out for Spotty’s follow-up article on Using Your Knife in Anger! 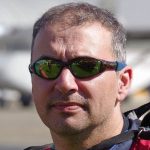 Adrian 'Spotty' Bowles has been jumping for well over 30 years with over 12,000 skydives. He is many years of CF experience with a number of UK National titles and world records over the years. He relocated to the US and resides in the Pacific Northwest. Being a USPA tandem instructor and an FAA Master rigger and still squeezes in a few CF jumps when he can.