I’ve thought long and hard about posting this incident

It was an odd one, a fluke but there are some takeways…

Last weekend I bumped the side of a CASA we were jumping – not once but twice. I didn’t even feel the second one – that caused a malfunction! We still took an 8-way launch off successfully. During the jump I felt something bouncing off my inner thigh. I thought it was a loose leg strap. When we finished the 8-way I tracked away as normal, waved and reached for my hacky. Surprise, no hacky!

I slid my hand to my pilot chute pouch and felt the pilot chute was in, then slid my hand as far up as possible to check my main was closed… then I deployed my reserve. Everything was good and I landed uneventfully.

If you look at the picture below closely, you’ll see that the fabric was neatly cut allowing the hacky to float. Keep in mind I didn’t even feel the wall strike. All because I didn’t stay off the wall.

After the incident someone spotted a small -– I mean, very small – dimple on that side of the aircraft. I’d say less than a quarter of an inch. I wouldn’t have given it a second thought if I had seen it before the skydive.

Discussing the story led to the following learning points.

Stay Away From The Edge

The best thing is, don’t let yourself get near the edge.  Protect your back pack at all times. Not just in a Casa launch, be aware of snag potential when launching or climbing out of any aircraft.

Did you know that when you have nothing out and you have a skyhook that your reserve handle doesn’t come all the way out? While I think I read that years ago, I had forgotten it in the heat of the moment.

My rigger later explained, “If the pin doesn’t come out of the marine eye handle, it T-bones at the cable housing.” See photo below. This is not a skyhook issue. It can happen with a straight pin set-up like many have. It only occurs if you have a total, not if you cut away from a malfunctioning canopy. It’s not a problem, it doesn’t keep the reserve from coming out – but as she said, it can scare the hell out of people!

Sandy Grillet, a very experienced organiser, told me something about setting up a Casa launch to avoid this problem.  The sides of a Casa are slightly curved, unlike a Skyvan.

When I organize a chunk out of the Casa – I do something I call skinny-ing up the exit. That means I purposely set up so the two people in the 3 and 9 o’clock slots get closer together than me (in the centre at 6 o’clock) and the person straight across from me (at 12 o’clock). In other words, I let 3 and 9 get belly to belly while 6 and 12 are further from each other. This makes the entire chunk skinnier than normal, making it less likely for the outboard people to hit the wall or ledge. And the exit still works great.

One of my friends thought to perhaps fly over and hand deploy me. The issue could have been that, as I had a chunk torn out of the top of my pilot chute, this could have just put the bag out and above me. We’ll never know what would have happened but personally, I’m glad he didn’t. By the time I tracked off I knew I had some issue to deal with and it worked out just fine. I’d suggest never to interfere with someone’s gear or deployment unless you are 100% sure of your actions.

Expect the unexpected. We’re skydiving after all. Stay safe guys!  😀 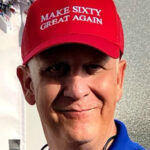