On the DZ I once heard someone ask a jumper, “How come you carry 3 hook knifes?”

“Because I can’t fit any more on my rig ”

This was a High Speed Malfunction and believe me the speed is higher on a Tandem. Time to initiate Emergency Procedures. I cut away and deployed the reserve. Almost immediately we were brought to an upright position with a full clean reserve above us. Great, no problem, now let’s locate the DZ and get home.

Suddenly I felt a tug behind me, I looked back and saw the bag of the main with the main still in the bag being towed behind us. My initial thought was why is that  there? And then, THEN! The main began to open, I went to grab my cutaway but of course I had cutaway.

Now think of your 3-ring system, a superb system that you think works perfectly. When your lines are extended vertically and you have a bag lock, a line over or some other malfunction when the lines are extended and you are acting as a weight directly below the problem, yes it will perform.

Try (on the ground) lying flat to simulate your freefall position, now cutaway, stand up and have someone extend your main bag directly behind you, not above you. Will the 3-ring system perform?

Those who know Tandems and pack Tandems will know that the 3-ring system can get caught in itself usually after landing when the risers and lines become slack ie, not in a vertical position.

This may have happened in my situation? Whatever the reason I had cutaway but the risers did not disengage. Examine the photos.

Suddenly we were in a downplane, both canopies open in a spin towards the ground. I had cutaway, we are both 100% going to die if this situation is not rectified. What do you do?

Your last line of defence is your Hook Knife, you have to do everything, use everything, exhaust all options before you smack in killing 2 people and becoming a forgotten statistic.

I reached for my Hook Knife and remember we are spinning quite fast at this stage. Look towards the lines, what do I cut??!!

Quickly the realisation that the reserve lines must be the clean bright white lines meant I had to cut and cut and cut every non bright new line I could see. It took a good 5 to 7 cuts until we again became upright under a stable reserve. The feeling of knowing we were going to make it was and will always be indescribable.

I put the Hook Knife in my mouth and took control of my steering toggles; David asked me if we were ok? I told him we were fine and heading for the DZ, he couldn’t hear properly what I said as I had the knife in my mouth, I passed the knife to him and said, “here, hold that”. David stopped asking questions.

Tandem masters and instructors on the DZ have said, ah… he must have had the drogue wrapped around his legs or there had to be a problem prior to drogue release. Some still maintain that opinion today. What I have stated above is exactly how it happened and those who know me know that I really don’t care what anyone else thinks or opinions formed.

I went on to complete a further 1,400 Tandems with a further 4 cutaways without having to use any of my Hook Knives.

Thought for the Day

Not only are you a fool and irresponsible if you do not carry at least 1 Hook Knife on each skydive but you could very quickly become a Dead Fool!

Related article: Cutting to the Chase

What types of hook knives are available, which ones will do the job and which ones you might as well throw away! Article by Adrian Bowles (pictured).

Cutting to the Chase 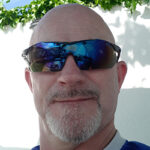 Karl is passionate Tandem Master and FS flyer who discovered skydiving in 1999 and hasn't left the sky since. He specialized in assisting those in wheel chairs who what to jump, saying he will always see them as the bravest people he has ever met.
Besides skydiving his other hobbies are Vespa Scooters, Northern Soul music and football.