An epic trip, skydiving over the jaw-dropping landscape of Iceland

The “C” word had scuppered all my planned international skydiving events for the last year, so when the last-minute slot came available on the Icehopp event, I grabbed it with both hands…

This was an adventure travel odyssey featuring never-before jumped sites all around Iceland, the brainchild of Arne Aarus.

76 skydivers from 14 different countries gathered on a rain and wind-swept day (unusual for the time of year in Iceland apparently) in September 2021. The atmosphere in the hotel conference room was expectant as we had our safety briefing and were introduced to the team:

The talking done, we headed out to our first location: Hella a small DZ (inactive in the last 5 years) with a warm clubhouse near the coast, where we meet our lovely jump plane & pilots for the week, a Norlandair Twin Otter.

The weather was challenging but the team managed to get everyone in the air, so a lot of the “F” word ie “Firsts” to be had! The first visual of the red “T” & smoke (as opposed to Tea & biscuits) that was to accompany us on our journey around Iceland.

In true skydiving style, we finished the day with a visit to Olvisholt Brewery, a microbrewery with world-renowned award-winning Lava, smoked imperial stout 9.4% ABV (inspired by the active volcano Helka visible from the brewery’s door), amongst other brews gamely tasted!

A bad weather day: so instead of jumping in, we were bused to, various known spectacular sites including:

Geysir – “the place that named them all” with geothermic activity every 7 minutes!

Gullfoss, an immense waterfall cutting through the canyon of the Hvita river.

Then onto the Volcano Huts at Thorsmork for an overnight stay, having crossed some seriously fast-flowing rivers in our high-rise buses, which was an adventure in itself

This was the site were the 2010 eruption of Eyjafjallajokull occurred and was covered in volcanic ash! The scenery and mountain ridges were spectacular.

A hasty departure was made before rain was due to cause flooding in the area, which could have made the already fast-flowing rivers impassable.

The weather was now on our side and we enjoyed three amazingly beautiful skydives.

We jumped into Seljalandsfoss, a waterfall of 60 meters with a cave behind it.

We skydived into Solheimasandur, landing near the carcass of a DC3 that crash-landed on black sands in 1973 (no one died!). It was strangely eerie from a skydiving perspective.

Then the jump to Reynisfjara “Black beach” with stepped basalt lava stacks.

The brief for the Black Beach was:

Rip currents and sneaker waves have been known to pluck unsuspecting tourists to their death!!

Onto a five star hostel, where there were curtained double bed bunks with views of the sea.

To add ‘icing on the Icehopp cake’ was the appearance of the Aurora Borealis (northern lights). At around 10pm the light show began and didn’t end until almost 2 hours later. A truly special experience that I was hoping for but did not dare to expect.

The logbook was filling up with unpronounceable names: Kirkjubaejarklaustur, Skaftafell, Jokulsarlon. The skydives on this day were visually stunning as we were in glacier land, from the ice caps to the outwash plains to the sea.

We had a magnificent view of Fjallsárlón, a lake where icebergs are born.

After the evening meal, the plan for the following day was discussed: Askja, an active volcano in a remote part of the central highlands of Iceland. This was to be the most challenging skydive of the event, landing in the crater at an altitude of approximately 3,500ft (1,100m), higher than I had ever landed. The volcano was surrounded by mountains at almost 5,000 feet with lakes in the calderas within. The air density was described as “like a really hot day at Perris” – the landings would be fast!

The big one – Askja Volcano!

By the following morning a “cunning plan” was hatched. We were to take off from Hofn and land initially at a lower level in the highlands around 2,200ft at Sauðárflugvöllur, an airfield surrounded by glaciers. There would be no ground crew, so load 1 with jumpmaster Snorri (who is part of Iceland’s coastguard search and rescue team) would act as the “pathfinder” team, throwing smoke, with Jeff Provenzano from the Red Bull Airforce jumping with smoke.

There would be an abandoned red vehicle with or without windsock (depending if it had blown away in the last winter!) to aim for.

Just for an exercise, some of Snorri’s pals turned up in a helicopter at our first landing area, very reassuring from the safety point of view!

From there the Twin Otter would land and take us up to jump into Askja. With a gentle mental nudge from Snorri & Skuli I changed my mind (a woman’s prerogative!), I would do the jump. Now I just had to get myself back on the manifest, preferably load 2! However, my slot had gone, so I would have to wait for load 3. But then Tommy offered me a slot on load 1! I went for it, part of the “pathfinder” team!

The conditions at both sites were perfect and the scenery was spectacularly breathtaking, as Snorri had promised, with crystal clear glacial streams to drink from.

Some went for a swim in the Viti caldera geothermal lake at Askja.

It turned out that satellite data showed that the “earth had moved” up by about 6 cm at Askja the day before. They did say it was an active volcano!

Then we made a long trek from the landing area through a lunar landscape to catch a bus, in which we wound through Askja’s lava field to our next airfield at Herdubreidarlindir.

From there we went on to skydive by the side of Lake Myvatn at dusk. The surrounding multiple extinct volcanoes gave another lush, amazing visual from the air.

The last day of jumping had a slightly later start after the adventures of the previous day.

We made a skydive to yet another visual feast of Asbyrgi – a glacial horseshoe-shaped canyon, said to be the hoofprint of Odin’s eight-legged horse.

We landed on the second hole of a golf course within the canyon, with wild blueberries to feast on. Then a short drive and a walk to the small lake at the tip of the horseshoe in the Vatnajokull National Park.

Loads 1 & 2 had some time out at Husavik, where we relaxed in geothermally heated seawater infinity pools overlooking the bay at this very typically Icelandic fishing town.

Meanwhile load 3 & 4 were jumping into Akureyri, home of our Twin Otter and Norlandair.

A massive thank you to the organizing team, who through thick and thin managed to deliver an amazing opportunity to see startling landscapes from the air and from the ground – the essence of Iceland.

I hope that this event will run again, as I know there are still more spectacular sites to be seen or revisited. This astonishing event was just a teaser!

Roll on next year! 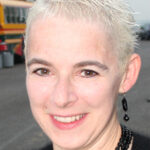 Ruth Green aka Dr Ruth aka DDR
Diminutive skydiver in her 30th year in the sport.
Competitor in 4 and 8 way
Multiple large formation world record holder