No, we don’t either – but respect to our new Russian friend Alex Chubarov, who jumped half naked in the snow – and nailed himself a World Record distinction for it!

We’ll let you enjoy the story in his own words…

Sometimes I get crazy ideas…

I’ve been practicing with the cold on the ground for a long time. I wanted to test myself if I could do it in the air. Before I started this project I asked if anyone had done this before. It turned out that the answer was no

In the past some guy jumped naked in March 2019, in Yakutsk. But he jumped together with the instructor, as a tandem passenger. And there were no independent jumps in shorts at sub-zero temperatures anywhere.

So I thought, why not register your experience as a record? And everything worked out!

But to make it work, I needed a versatile training:

There is a lot of work behind a few minutes of jumping, including overcoming yourself. After all, you need to do something that no one has done before you

. But this is only public opinion… What is happening inside you is much more important.

Your true motives, your growth, your development and personal victories, when you become better and stronger every day than you were yesterday

When I decided I was going to do this, many people thought that I was crazy, so I did not spread about my plans much. It’s really not easy to do something that no one has done before. Despite the fact that no one really supports you yet. All for the same reason, no one did it

From plan to execution

Now about the important thing…

The day came with suitable jumping weather, which is rare in our latitudes in winter. Frost and sun ─

. When I went to the airfield on the thermometer I had -13 degrees Celsius.

I didn’t feel very well, and there were notes of doubt slipping through

.
When I arrived and saw a crowd of freezing parachutists, because it was really cold. I was silent about my idea, because people would just twist their finger at the temple

And then a guy who was aware of the situation and was supposed to be my operator comes up to me and says something like this: “Sasha, well, maybe not today after all? Take care of yourself. It’s cold at the top, like a kick-ass”

In my mind there was just one question at this point – is it worth it?

… At the same time, you still need to open the parachute, pilot it and land in the right place. But I was the one who had to make the decision.

I left everyone, went in my car and meditated in silence

️. The weather was as I wanted, everything was ready, but the outcome could be different. There were doubts, but at the same time, I did not want to miss the opportunity, succumbing to fears. After all, I did not prepare for nothing and I knew I could do it! And there was only one way to find out for sure

For me, it was a step into the unknown, but I decided to relax and just do it.
At the same time, I lowered the importance of this event for myself, so as not to go into the ascent as a feat, but just to enjoy such an interesting jump

The sun was shining. I exhaled and relaxed into the frosty winter air. It was a very cool feeling. I loved it! To really feel the sky, you need to take off your clothes!

Was it cold? Yes! But I’m used to the cold. Everything turned out to be easier than I thought. I got a very valuable experience and a lot of positive emotions.

After that, I was often asked if my eggs froze? I answer is NO 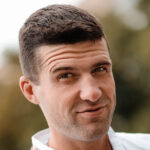 Sasha is a Russian skydiver and USPA Coach. He started jumping in 2018 and he fell in love with the sport.

He was an officer in the Russian Space Forces and now he has a school for developing consciousness and sensory capabilities and improving and strengthening the immune system through physical and mental practices.