It’s traumatic getting injured, especially when skydiving. After you’ve recovered, the thought of doing that first jump can be almost as traumatic. How can you best make the transition back to skydiving?

It was mid-may 2021 when we got the news that dropzones in Belgium could finally open again after another long covid-19 lockdown! I had been recovering from a broken pelvis after a CRW wrap and bad landing 9 months earlier. Thankfully the pelvis break had been a stable fracture and didn’t need operating on, however that meant a slow and careful recovery to make sure it remained stable. The first few weeks were spent lying down to take pressure off my pelvis, but I could hop around on crutches (carefully!) when needed. Later I was allowed to use a wheelchair for short periods, and eventually after 7 weeks I could take my first steps (with crutches) and start intensive physiotherapy. It was quite a journey!

Everyone was excited about being able to jump again, but I cried when I heard the news. I was physically healed enough to get my medical signed and get back in the air… but was I ready mentally and emotionally? I wasn’t sure; and coming out of lockdown forced me to start thinking about whether I was ready to cross that bridge.

The first jumping weekend of the year came and went… and I stayed on the ground, soaking in the atmosphere at the DZ and watching the landings (this was a good first step).

I kept wondering how other people overcame their fear of getting back into the sport after trauma and injury. A friend of mine shared with me a few things that helped her in a similar situation. This was so encouraging and useful that I thought, “I need more of this”.

I had been a member of the Women’s Skydiving Network (private Facebook group) for a while and remembered that it always seemed like a safe, supportive place to ask questions and seek advice. So, I plucked up the courage to write a post. I explained what had happened and how I was feeling, and summarized the advice my friend had already shared with me.

My question was if anyone else had tips or advice based on their own experience of returning to the sky. The response I got was overwhelming to say the least…

Women from all over the world then began to share their experiences and what had helped them return to the sport. They shared great tips and also sent words of encouragement, support and love. The advice was wide and varied, ranging from breathing techniques to reduce stress and panic (traditionally used in yoga) to practical considerations over gear and weather conditions.

A common theme throughout the thread was knowing when it’s the right time to jump again. This, of course, is a personal thing and for some people getting “back on the horse” as soon as possible worked, whereas others recommended a no-pressure approach, patience and waiting until it felt “right”. Many suggested just spending time on the DZ first, getting involved in ground activities like packing or just hanging out in that environment again. Some even recommended going to the DZ during the week when it’s less busy.

Being prepared to jump again was another hot topic: practicing emergency procedures, watching landing patterns, studying weather conditions, and visualising different scenarios and how to react to them. For some people, jumping a student rig with a bigger canopy was the answer to overcoming their fear. For others it was more reassuring to jump their own, familiar rig and the canopy they had the most experience flying.

Nothing was off topic. The comments were open and honest, and at times filled with raw emotion. There were suggestions to talk about what happened, write a diary, and try to process the trauma. These strong women prepared me for the possible flashbacks, the anxiety, and the tears that may come. They armed me with various techniques to calm myself down; breathing deeply and loudly when necessary, using mantras like “I can do this”, and humming or singing a song. They reminded me to enjoy the beautiful views from up high and take time after each jump to reflect on the happiness the experience brought me. As someone rightly said in the comments, the conversation was healthy and supportive.

There were various recommendations for what the first jump should be: a hop and pop to focus on landing, a solo freefall jump, a 2-way with partner or friend, a solo high-pull to play with the canopy, or jumping with a group to have something to focus on in the plane and in freefall.

All of the advice could have been confusing, with so many opposing views and ideas, but actually it wasn’t. What it showed me was that everybody is different, and every recovery journey is unique. I would have to find my own path back into jumping, doing what felt right for me. Luckily, I had a lot of amazing advice to choose from and help me on my way…

The following Sunday I did 5 jumps! As soon as I woke up, knowing I was planning to jump that day, my heart was racing and I was overcome with nerves. I started using the advised breathing techniques before I even left the house. As planned, I went along to the DZ with my gear and an open mind about whether I would actually jump, or not. Instead of greeting everyone like I normally would, I took myself off into a corner and did some yoga to calm my nerves and focus my mind.

I checked the weather conditions and they were perfect for me. There was quite a strong but constant wind and this was reassuring for me as my accident had been in nil-wind conditions. One of my main concerns was flashbacks so to keep myself focused I joined a 12-way FS group (organized by my partner) for the day. It helped to have the routine of jump, pack, debrief, brief, and repeat. It also helped that I knew the people in the group well, so I felt comfortable, supported and not at all pressured.

After digesting all the advice I was given I decided to jump my own rig and my Stiletto 120 (the canopy which I have the most jumps on). The idea of wearing an unfamiliar rig and flying a different canopy (even if it was an upsize) didn’t sit well with me.

The first jump was incredibly stressful and emotional – but I was prepared for that. I breathed deeply and calmly in the plane and focused on the jump we were about to do. I used the breathing techniques again under canopy and on landing while also singing along to the first song that came into my head (Fleetwood Mac!). I would never have thought of using music but it was actually very useful and relaxing.

Another helpful piece of advice that I followed was to land in the student area. There was so much space around me and I felt much less pressure. As soon as my feet touched the ground I burst into tears and my hands were shaking so much I could barely stow my brakes! It was a huge release of adrenaline, stress and emotion.

The next jumps felt calmer, less stressful and I could start to relax and enjoy them!

I know there will be ups and downs and I’m prepared for that, just as I was prepared for everything else. That’s down to every person who replied to me when I reached out, commented in the group, and got in touch with me privately – you all helped me find my wings again and get safely and confidently back in the air. Thank you. What an amazing skydiving family we have! 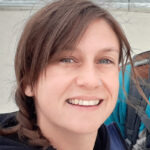 She was also thrilled to be part of the 45-way team at the World Fly-In Expo in Wuhan, China (2017).
Over the last few years she's also been practicing CRW (2-way and 3-way rotations).

Maddy comes from England but lives in Belgium with her partner Angelo, where she works as a yoga teacher. She happily shares yoga with skydivers both at her home DZ in Moorsele and also when travelling.