Three years ago I got my A license.  Little did I know that reading Dan BC’s book, Above all Else, would change my life. I fell in love with 4-way, and shortly after starting my first team, I learned about the big-way discipline. That’s when I heard about Power Play. I was told by many competitors that Power Play is the most elite event in the country that consists of the best and most talented formation skydiving (FS) jumpers around the world; and as a result, they can build the most challenging formations. When I found out the event was organized by Dan BC, the person whose story changed my life, and whom I’ve been wanting to jump with since I read his book, I knew I had to train hard to be a part of it.

I set myself a goal to get an invite to the P3 Power Play and there it was, after 1800 jumps in three years, plenty of big-way events and 4-way training, I was able to get my first invite to Power Play in 2019. The organizers for this event were Dan BC, Doug Forth, Craig Girard, and Martial Ferré.

The plan was to do six jumps a day the first three days with groups of 16 to 18 jumpers and then combine all the groups on the last day for four jumps.

The first day, I was amazed by all the amazing talent that was present from all over the world. I was there with elite competitors that I have competed against, watched compete in higher divisions or simply some amazing people in our sport that I’ve been wanting to jump with for a long time like Kate Cooper-Jensen, one of the P3 organizers.

On day 1, I was in Dan BC’s group. We had some of the most amazing and challenging 18-ways there are.  We had a combination of outfacing pieces to flying compressed accordions. Every jump seemed impossible to complete in the dirt dive, but they were amazingly executed in the air. We repeated each jump twice, and that wasn’t because we did poorly on a jump. It was to see if we could build the formation faster and get more points… And we did!!

On day 2, I was in Craig Girard’s group with a new group of jumpers, and just like I imagined, the skill level was extremely high. Craig has a fantastic way of explaining everything from the very basics of skydiving to complicated big-way skills that are crucial for a successful skydive at Power Play. Everyone had to perform on a high level with very little room for error to achieve our goals, and that did indeed happen, which led to some impressive jumps and some happy faces.

On day 3, I was in Martial’s group, again with a new group of jumpers. Martial’s style of organizing is very different than other organizers (in a fun and exciting way). I remember while dirt diving for the first jump of the day, we were already at point 5 of a very challenging jump and then he added another….. and another point for a total of 7 challenging formations which seemed impossible on the ground. The beauty of Martial’s style of organizing is that he has the day’s jumps planned like a story where you don’t repeat any of the jumps, and instead you just carry on from whatever point you left off at in the previous jump and he introduces new points to the skydive. Throughout all the amazing jumps that day, we also got a sneak peek of a new block for 8-way that Martial is planning on proposing to add in the 8-way FS dive pool at the end of this season.

On the final day, we were going to do a 64-way all outfacing diamond designed and engineered by Martial Ferré. He initially did this formation in Belgium with 34 skydivers and shortly afterwards, different organizers around the world started doing the same jump at their big-way events, with the largest being a 52-way in Ukraine. Obviously after this feat, Martial wanted to get a new record for his own formation that won’t be easily broken, so he traveled all the way to Perris, CA where he knew he will have the skill level to make it happen.

Generally, on the final day of a challenging big-way event after they reveal the formation, you have some doubt in your mind because of the difficulty of the formation. Of course, you want to get it, but the formation is usually something very challenging. I remember sitting in the Skyvan on load 1 thinking with all the skill level here, everyone is capable of getting this formation, and I saw no reason for us not to complete it.

Unfortunately, on the first two jumps, we had a few jumpers go below the formation, but with a few minor adjustments and slot changes, we had a good third jump. However, we still didn’t have the all outfacing diamond formation. Going up on the 4th and final jump of the day, after a lengthy debrief and dirt-dive, there was still as much confidence and belief among the jumpers as the first jump of the day. Somehow we all knew we were going to get it on that jump… and sure enough, we built the world’s largest all outfacing formation 🙂

Looking back at the 2019 P3 Power Play, I can say that it was by far the most well organized and challenging event I’ve ever been to. My favorite part outside of jumping and meeting all the amazing people at this event was watching Craig Girard and Martial Ferré, two world champions who competed against each other many times at the world championship hanging out with all the jumpers at the end of the day, telling incredible stories, and sharing advice.

Thank you to P3 Skydiving, Skydive Perris, the organizers, videographers, pilots, and amazing jumpers who made this event happen. I can’t wait to be back in 2020 🙂

For more information on the P3 Power Play and other P3 Events go to www.p3skydiving.com

Cameraflyers were Craig Obrien, George Katsoulis and Terry Weatherford. You can watch their jump videos and see more photos at skydivingphotography.com 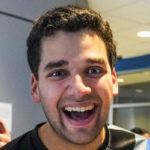