Patricia Annette Thomas was recently awarded the rare accolade of the USPA’s Lifetime Achievement Award. Jessie Thompson takes a look behind the scenes at Pat’s life and philosophy…

If you asked Patricia Annette Thomas what her greatest life achievement was, she would say her family then quickly change the subject. She’d recount a story from the myriad of wonderful moments in her life – the time she served tea to Queen Elizabeth, her being appointed an Honorary Golden Knight, or when she and fellow CPS owners were invited to fire a Minigun from a helicopter. There is nothing “mini” about this gigantic machine gun capable of firing 2,000 rounds per second in skilled hands. Pat Thomas likes to boast delightfully, “to everyone’s surprise, I fired more rounds from that Minigun than any of the men!”

But at the news of being the 2018 recipient of the USPA’s Lifetime Achievement Award, she humbly resisted the honor, stating simply, “there are so many other people more deserving than me.”

Veteran cameraflyer Bruno Brokken disagrees, “Her company, Sun Path, makes the best containers on the market and they’ve always been really amazing, not only to their sponsored skydivers but to the entire skydiving community; and that is why she deserves that award 100%.”

Pat’s five-foot stature is a force to be reckoned with. Unabashedly direct, she is a fiercely loyal, honorable businesswoman whose impact traverses the globe. Born and raised in the UK, Pat emigrated to the US in 1992 and now has dual nationality. ” I am a ‘Proud American’, never forgetting where I came from.” Her relationships with family, friends, and employees come before any of her impressively successful business endeavors. Pat is admired by all who know her for her tenacity, generosity, commitment and dedication. Daughter-in-law and Sun Path CFO, Jessica Blay said, “[Pat’s] heart is bigger than anyone I know. Family is most important to her, but the skydiving industry is part of her family.”

Pat celebrated her 60th birthday in 2017 and gave herself the gift of retirement. Old habits die hard though, and she came back to work soon after! President and Owner of Sun Path Products for nearly 30 years, Pat has just seen her company produce its 50,000th Javelin. Pat would tell you the driving force behind Sun Path’s success is the people. Boldly stating “there is a method in madness”, she wears many hats and has become one of the most influential women in the skydiving industry. The “method in madness” led to the development of four successful sister companies, including Complete Parachute Solutions (CPS), and Tactical Training Facility in Coolidge, catering to the military sector.

The success of Pat’s businesses has afforded her a platform to give back to the skydiving community that she loves so much.  Sun Path has been an integral sponsor to the world’s leading champions and teams of all skydiving disciplines. USPA Executive Director Ed Scott stated in Pat’s nomination citation, “She has attended nearly every USPA Nationals since 1992 and every World Championships, World Cup, and Mondial since 1989.” How does Pat feel when she goes to a World Meet and see almost every podium team sporting Javelins? “Very proud of all their hard work, dedication and sacrifice.” They choose to sponsor up and coming athletes as well as National Champions. “We have a team that works together and takes this very seriously, trying not to forget former champions, mentors, instructors but also looking to the future.  A lot of future champions have come from those youngsters that compete in Collegiate Championships.”

For decades Pat has run conferences, meetings and logistical planning for USPA, BPA, FAI and IPC. Why do so much unpaid work? “Because it is FUN!” she replies. Pat strongly believes in the importance of preserving skydiving history and has worked passionately to honor the path to the present. Since 2011, her “baby”, so to speak, has been the International Skydiving Museum and Hall of Fame, on which she is a Board of Trustees member and Chair of the Nominations Committee.  She masterminds fundraising and logistics, and recently helped orchestrate “Operation Packrat,” in which her team of Skydiving Museum cohorts catalogued and stored hundreds of artifacts for the museum in her Raeford warehouse, until they have a permanent home in the Museum to be erected in Florida.

Elected Chair of the Parachute Industry Association (PIA) Symposium Committee in 2003, she stands at the helm of the team that has successfully coordinated its tenth PIA Symposium. Ed Scott gave perspective, “[The Symposium] brings together nearly 1,000 skydivers, manufactures, instructional rating holders, riggers, and industry leaders.”

The PIA 2019 Symposium Sun Path party saw the Hyatt in downtown Dallas filled with over 300 of Pat’s family, friends, athletes, colleagues, and dealers. Greg Windmiller warmed up the audience by sharing anecdotes about Pat before USPA Board Members Sherry Butcher and Randy Ottinger took the podium to present Pat with her award. Sherry spoke of the award’s history before inviting Pat to take the stage. “It is awarded to an expert sport parachute jumper, active or retired, in recognition of outstanding sportsmanship skill, or personal contribution to both the sport of skydiving, and the USPA… we want to thank you, Pat, for your leadership, generosity, and passion. Your hard work and dedication to our sport is truly inspiring and the inscription on your award reflects that.” Pat was applauded as she stepped on stage sporting a Sun Path company uniform, bare feet and an uncharacteristically shy demeanor. Randy read aloud the inscription. “For nearly three decades of advancing the sport of skydiving by sponsoring competitors and teams and being a leader in the harness and container industry and masterfully organizing the International Parachute Association Symposium.”

Pat beamed at the hard-won honor, shaking hands and sharing affection with her presenters before promptly handing the award back. Without speaking into the microphone, she said “thank you” and quickly ran off the stage, her face a cheery shade of red. The room erupted with congratulatory applause.

Rusty Lewis, IBA Director of Safety and Training, summed up her nature, “Pat is a pioneer within the industry, forward-thinking, hard-working, with a spicy personality. Her leadership has powered the Sun Path team to innovate products that have made us safer and raised the standards for the sport we see and feel today. Pat’s attitude to making things happen and no-holds-barred, unrestrictive zest for creating the best of the best and pushing for excellence is inspirational.”

How did Pat feel about the award? “This is probably my highest accolade. I was very shocked to be recognized by my peers and only the second woman and I think the first immigrant to have received the award. It was rather nice to know that people are paying attention to you when you actually believe they are not.”

Even with a lifetime of achievements under her belt, Pat Thomas is not one to slow down, and we expect to see her support of skydiving continue for many years. We salute Pat Thomas with heart-felt CONGRATULATIONS on receiving the USPA’s highest honor, the Lifetime Achievement Award!! HER!! HER!! 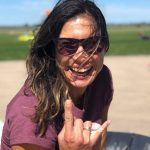 Jessie Thompson, from Portland, Oregon, USA, is a three-time World Record holder for Women’s Largest Vertical and Upright Formations, and one of the Red Bull Fly Girls who set the premier Women’s Vertical Sequential World Record. With 4000 jumps and counting, she holds multiple State Records for Largest Vertical and Upright Formations throughout the US. As an FAA Certified Senior Rigger, former Sun Path Products Factory Rep, and active USPA AFF and Sigma Tandem Instructor, Jessie enjoys teaching others about gear safety and maintenance and loves sharing her knowledge about body flight as a Freefly Load Organizer and Instructor. When she’s not skydiving, the avid yogi enjoys traveling the world with her Boston Terrier, Mr. Beans, writing epic freelance copy, and healing athletes as a 13-year vetted Sports Therapist. If you run into her at a boogie be sure to say hi and let’s fly!

Come fly with me!!