Everyone can now watch the amazing movie, Pink Skies, for free

On September 26, 2009, 181 ladies from 31 countries came together to create the Women’s World Record. The Jump for the Cause event also raised more than $900,000 for breast cancer research for City of Hope.

Warp 8 Productions created an 82 minute film, “Pink Skies,” documenting the making of the record and offering information on what we can do to help prevent cancer.

The Making of Pink Skies

We asked skydiver, pilot and filmmaker Gulcin Gilbert for some background on the movie…

The above is a terrific quote by one of my favorite directors, Tony Bill, best known for producing the academy award winning film, The Sting.

The film follows Ruth, a breast cancer survivor as she hopes to join an incredible team of nearly 200 women from 31 countries to create a World Record all Women’s Skydiving Formation. The team also has a goal to raise funds for breast cancer research and prevention.

Along with phenomenal skydives, the film features, breast cancer survivors, cutting edge researchers, doctors and activists. It reveals breakthroughs that have not been widely publicized, and the seismic shift towards prevention. This is interwoven with the very challenging world record skydive event that takes place over a period of six days.

Skydiving and cancer are unusual topics to marry in a film. My journey as a filmmaker began from the skydiving aspect. I’d been jumping for over 30 years. I’m not a breast cancer survivor but I have friends that have been touched by the disease.Near the end of 2008, I was having dinner with two friends discussing the upcoming event, Jump for the Cause (JFTC). One of my friends was the VP of development for a major cable channel. I had participated in JFTC in 2005 and had been very impressed. It brought together the best female skydivers in the world, and also brought out the best in all the women who participated. It was skydiving with heart and purpose. I was trying to convey this to my friends when a light went on. I looked directly at my friend Lucia Cottone and said, “Somebody needs to do a documentary about JFTC.” Lucia looked right back at me and responded without missing a beat, “Why don’t you do it?” The gauntlet was thrown.

Pink Skies was my first full-length feature project as a director, producer and writer. I’m a pilot for a major airline. I did however do my undergrad work at UCLA’s Theatre Arts school and did a lot of work with video….a couple of decades ago. The technical end had changed tremendously, but storytelling elements remain unchanged.

The Women’s World Record skydiving event, JFTC was shot in September of 2009, at Perris Valley, CA. Along with successfully breaking the all-women skydiving formation record with each event, JFTC would raise almost a million dollars for the City of Hope for breast cancer research and prevention.

This event was the brainchild of Mallory Tarcher-Lewis (daughter of the late Shari Lewis) who partnered with Kate Cooper-Jensen and Tony Domenico, renowned organizers. After five events together, the trio decided that 2009 would be the very last JFTC. This was one of the reasons I felt so compelled to document this event.

Directing the shoot during the event was one of the most challenging things that I’ve done as I was also one of the participants. In the film we show five formation skydives and one solo dive. At the event we made 20 jumps over six long hot days with temperatures exceeding 110 degrees.

I had my rigger, Larry Simmons, pack my main. That helped give me the confidence to think about the film and my shot lists in addition to my job as a skydiver in the record. On the way to 18,000ft, I’d make lists of shots and interviews I wanted to film once I was back on the ground. My little sister Xahra was a perfect PA. She would meet me when I landed, help me take my rig off and run it to Larry for the repack. Then she would come back with water and a microphone and shepherd me to where our film crew was shooting next. Sometimes she would make me take a quick break to re-center myself. We were on the set every morning at 5am to capture sunrises and the arrival of the participants, we shot multiple jumps, interviews, background and then we stayed on to cover the evening events.

With the great shots that Director of Photography, Zac Heileson, took of the team prepping for the jumps, the interviews and the extraordinary aerial footage shot from some of the world’s top aerial photographers, I had the material to show the world the tremendous athleticism and discipline in our sport. People are used to seeing skydiving portrayed as a daredevil stunt. I was pleased to be able to open a different door into our world from an insider’s perspective.

Don’t be a Victim

The next task was bridging skydiving, breast cancer and women’s empowerment. I interviewed various specialists and soon made the decision to focus on prevention. In skydiving there is an oft repeated caution, “Don’t be a victim.” This phrase would form the theme for Pink Skies.

One of the first items that caught my attention in interviewing several oncologists was that they sent every woman with breast cancer to nutritional counseling. I interviewed Dr. David Heber, Director of the Center for Human Nutrition at UCLA. He pointed out studies showing that fats consumed in our diet arrive in breast tissue less than 18 hours later. He blamed the “bad” fats in our food, composed of processed oils made from cheap subsidized corn, as being a leading cause of inflammation in women’s bodies. He advocated a diet rich in unprocessed, multi-colored fresh vegetables and fruit. Researchers have found certain foods like blueberries, pomegranate seeds, grapefruit seed extract and mushrooms help prevent breast cancer and prevent recurrences. Limiting animal proteins and processed food were also keynotes.

By changing our habits, reading labels, reducing our exposure to environmental toxins and radiation, we can take charge of our health. The final keynote in the film is to take self-responsibility for your health rather than waiting for big business to find a cure.

After months of sorting through 90 hours of tape and countless hours of editing, it was finally time to submit Pink Skies to the film festivals and find distribution. We premiered as the opening night film for Los Angeles Women’s International Film Festival at the Laemmle Theatre on Sunset Blvd. in Hollywood. We went on to win a Gold Medal for excellence at the prestigious Park City Film Music Festival, Best Documentary Film at the Beverly Hills Film & TV Festival and the Las Vegas VegasCinefest.

In March of 2012, Pink Skies premiered on the Documentary Channel and earned high ratings as part of “Her Take”, a month featuring films by female directors. It continues to screen bi-monthly on the DOC Channel. Hannover House released the film on DVD.

Further information on Pink Skies, including links to resources can be found at: 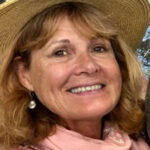 Producer/Director/Writer Pink Skies
Gulcin is an experienced skydiver with over 4000 jumps. She was happily able to participate in the 181-way Women’s World Record as well as document it.
Pink Skies marked her debut as a director.
Flying being a predominate passion, she holds a daytime job as a Captain at a major airline.
She is currently writing a book on her skydiving and flying adventures